Nature and beyond – the artistic fashion of Grace Lillian Lee

Australian artist and designer Grace Lillian Lee’s work is inspired by ‘prawn-weaving’, a craft technique central to her Torres Strait Islander heritage. Body Sculpture, her newest collection of work using this technique, is at the Cairns Regional Gallery August as part of the Cairns Indigenous Art Fair 2016.

Born in Cairns and trained in Fashion Design at RMIT University, Melbourne, Grace Lillian Lee is a young and emerging designer whose work explores the aesthetic possibilities of traditional craft techniques within a contemporary fashion and art context.

The six pieces of body adornment that make up her Body Sculpture collection reference ritual performance and traditional crafts, drawing upon and deepening Grace’s ongoing explorations into palm-leaf weaving techniques—affectionately referred to in the Torres Strait as “prawn-weaving”. The practice is common in the Torres Strait, used for practical basketry, and more decoratively for hanging ornaments and children’s play objects—such as toy prawns (hence its nickname, prawn-weaving).

“I think prawn-weaving as a technique travelled down from Papua New Guinea due to the pearling industry. Torres Strait is a very multicultural place because of this industry.

“I was actually taught the techniques by renowned artist, Uncle Ken Thaiday from Darnley Island, whom I met in a gallery whilst living in Cairns. We used to visit each other’s studios to share stories and swap different making techniques. I’ve been extremely lucky to have someone of his calibre as a mentor, he is very inspiring”. 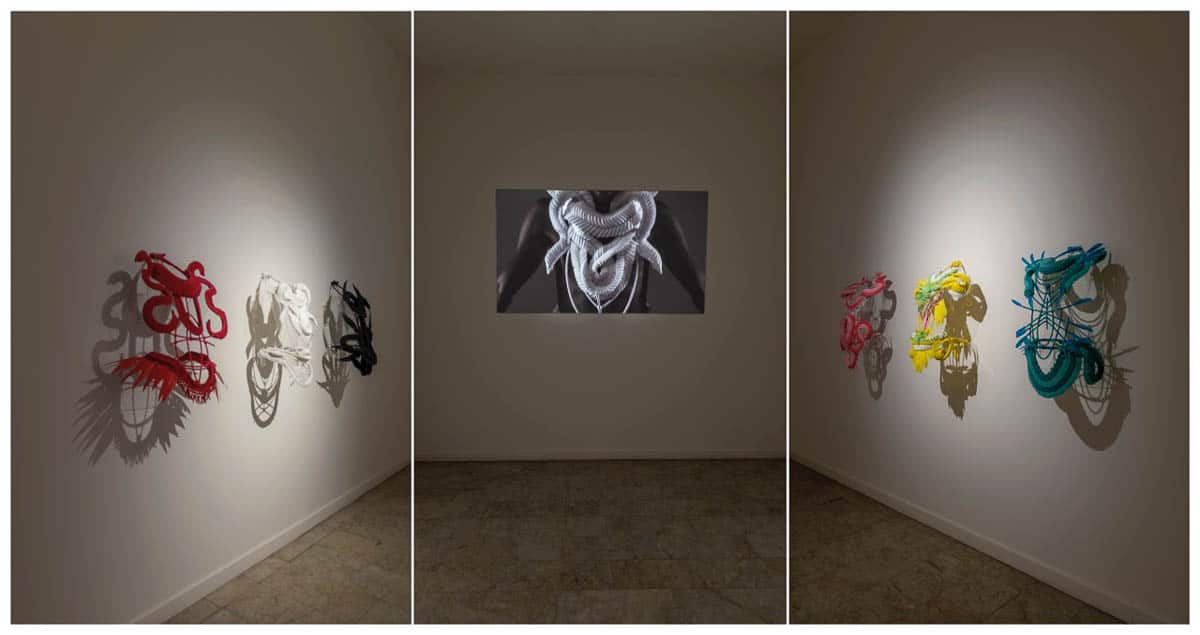 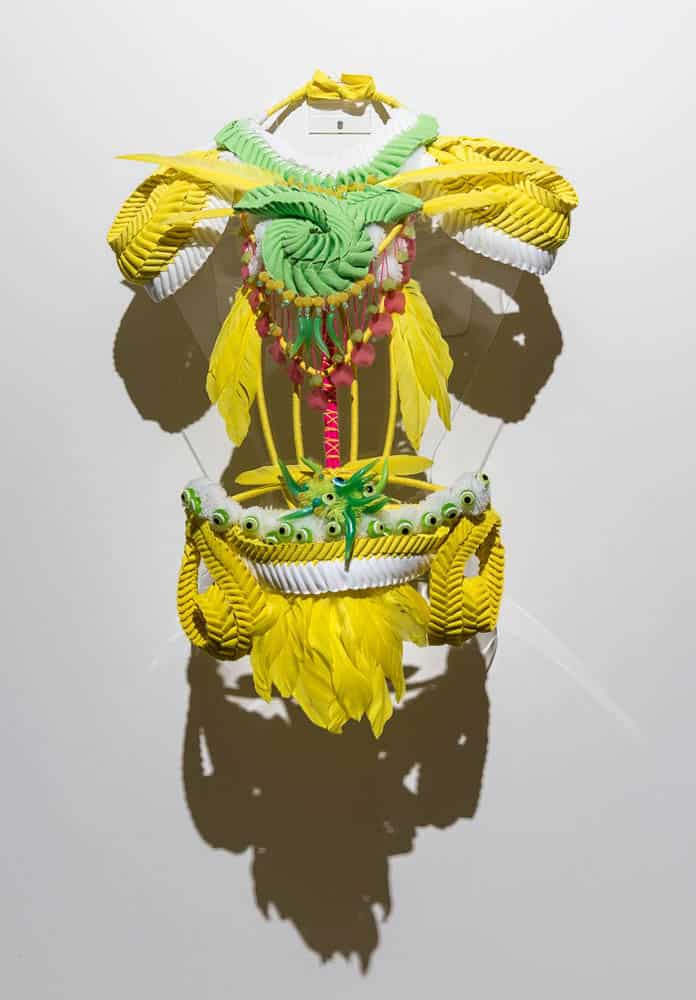 For Body Sculpture, Grace takes a departure from the geographically available materials usually associated with palm-weaving such as coconut leaf, banana fibre or pandanus, to explore the more processed fibres of contemporary fashion such as pre-dyed cotton webbing, “Metres and metres and metres of it!” laughs Grace, then reintroducing traditional elements such as wood cane and decorative goose feathers.

“I’m really excited about presenting Body Sculpture, as it’s my first serious foray into contemporary art, and opportunity for my work to be seen in that context. Fashion has its place, but exploring my work as an art practice allows me the time and space to deepen the ideas and push the boundaries of traditional techniques within a contemporary context.”

Her sculptural work has grown organically from a passion for millinery as ritual headdress, and performance, both of which have formed part of her trajectory since graduating from RMIT in 2010. Grace initially set up a millinery business before an invitation from the Cairns International Art Fair in 2013 led her into curating and presenting fashion performances. She has since curated and directed three parades designed to showcase emerging indigenous craft and textile talent, watching the shows grow from small and intimate events into a highly anticipated, large-scale annual production.

Grace speaks of the thrill of providing an outlet for Torres Strait Island and indigenous youth to tell their stories, and explore their creativity and cultural artistry in a contemporary setting.

“It’s so rewarding seeing indigenous youth experimenting in a space they wouldn’t normally have access to in their traditional communities. It frees up their creativity in new ways and provides a gateway and the inspiration to travel outside of their communities, bringing their craft and philosophies into contemporary culture”.

This year’s parade, Jana Jaral (meaning “respect”), will feature a number of artists and designers from Cape York and Queensland presenting wearable fashion that express the message of “nature as the most important thing, as inspiration and life-source”. It includes felting techniques from Mornington Island, beading, feathers and bright colours reflecting Cairns and the Great Barrier Reef’s beauty. Natural fibres, stencils, hand-dyed fabrics and weaving with wood will express the northern rainforest environment.

Grace hopes to deepen her work in the area of indigenous crafts, and their contextualization in contemporary culture, by taking on a PhD in the near future. 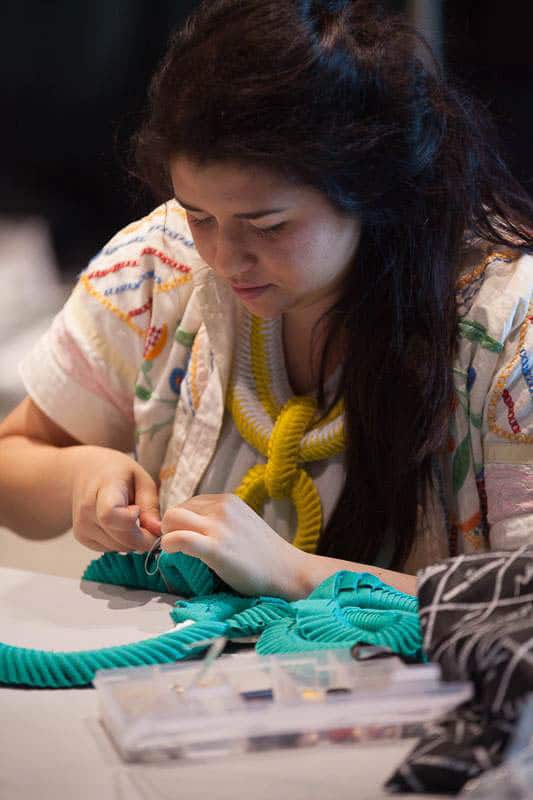 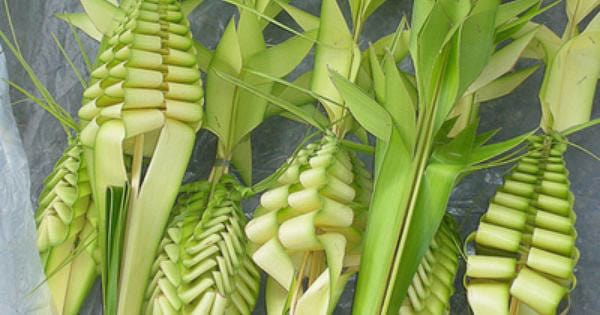 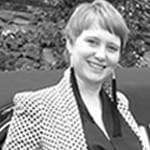 Michelle Boyde (An interdisciplinary designer and creative director living and working from Boomer Bay in Tasmania). Michelle Boyde is an interdisciplinary designer and creative producer living and working from beautiful Boomer Bay on the East Coast of Tasmania. With a background in dance, and an honours degree in fashion from RMIT, Michelle’s interest lies at the intersection of art, design and the performance. She has curated and creatively directed several art and design-driven events, including a series of site-specific, interactive events that allow audiences to engage with, and complete the work, for clients such as Melbourne Fashion Festival, State of Design, National Gallery of Victoria’s Art Beat series, Mona’s Dark Mofo Festival and Monash Gallery of Art. She is currently collaborating with interior designer, Danielle Brustman on a series of interdisciplinary projects combining interior and fashion design under the name Brustman+Boyde, and is also co-director of experimental art, design and sound collective Unconscious Collective, producing socially-focused immersive events and installations. See www.boyde.com.au