Objects for today from the shards of the past: Possibilities for ceramicists in China 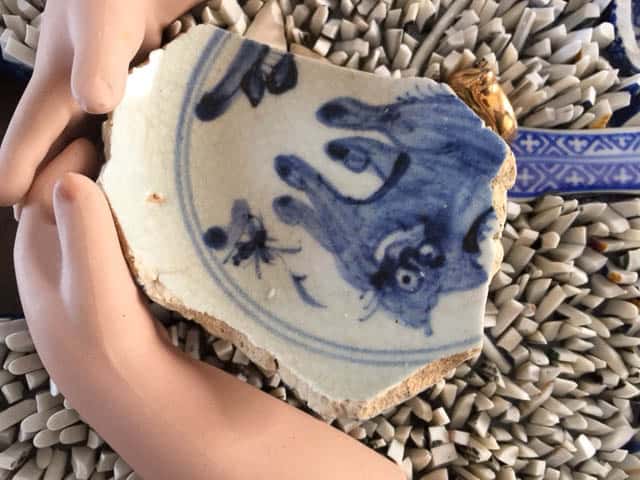 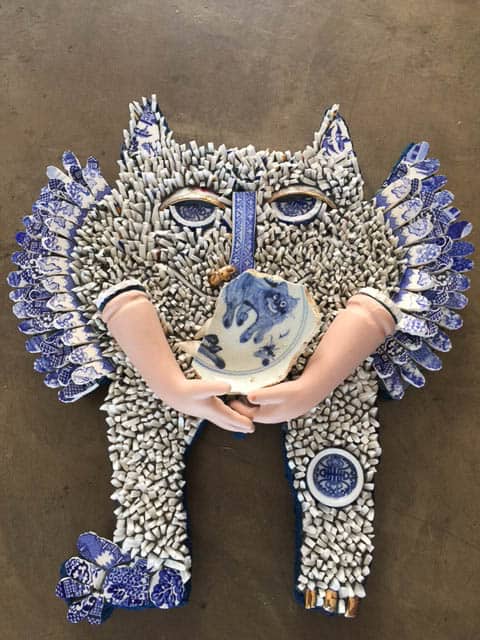 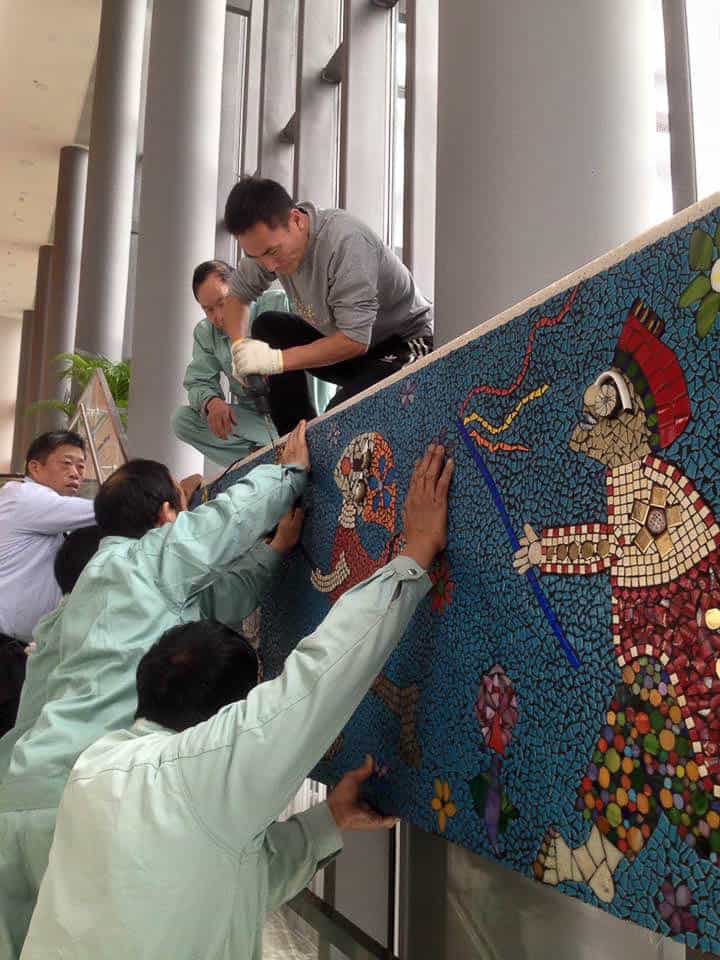 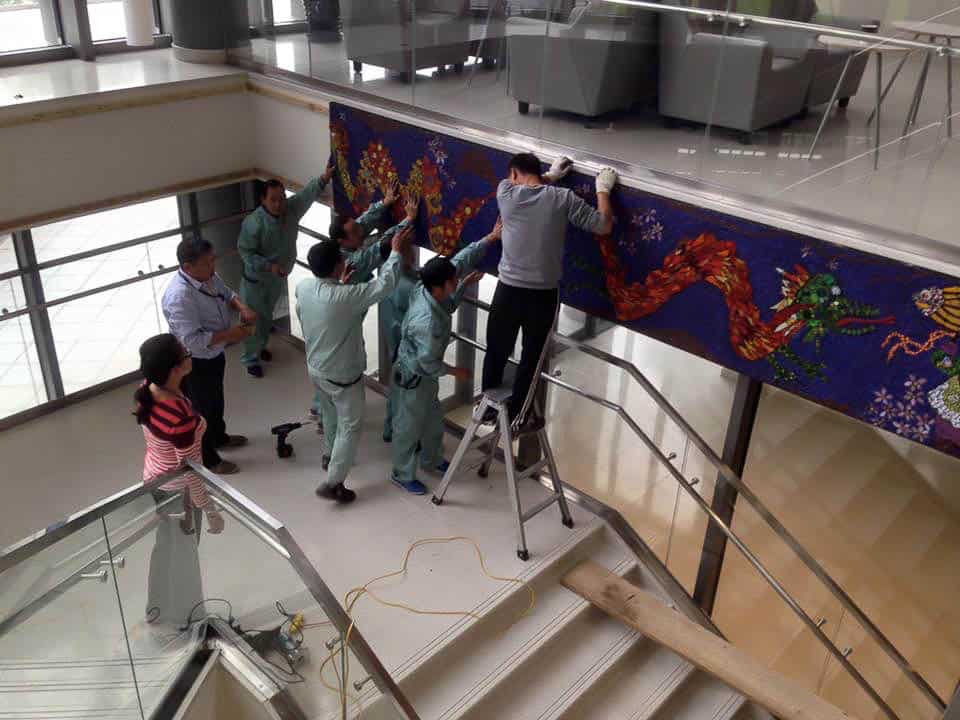 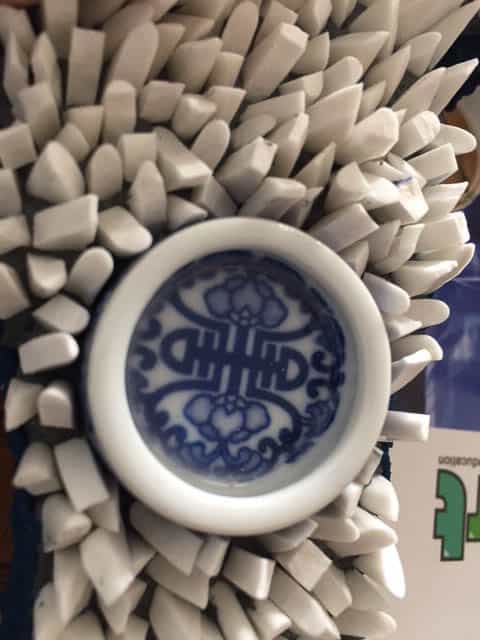 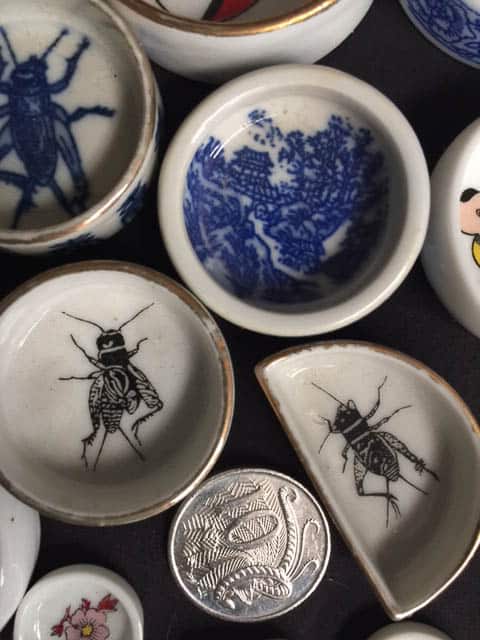 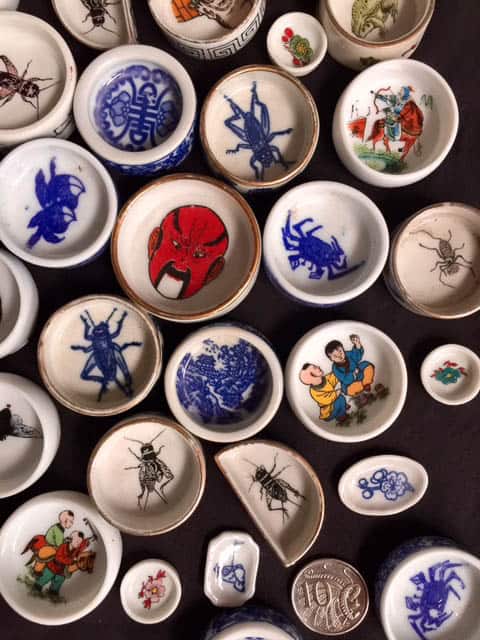 In October 2015 I was commissioned by the Shanghai American School in Pudong, Shanghai to make a mural for the new Performing Arts Centre. The project was to be done in collaboration with the students that range in age from three to 18 years. The mural is about 14 metres long. It was to be made in two weeks and later installed by the school’s maintenance team.

The aim of the mural was to utilise the images of the Jinshan Peasant Painters from the Jinshan Province in Shanghai. The school environment has many paintings that have been made by local Jinshan Painters. The peasant painters are of great interest to me. Firstly, I relate to their playful scenes and bright palette. I am also interested in the stories that their works tell. They depict simple scenes recording everyday life and festivals. They are a bit like a Chinese version of Bosch or Brueghel’s genre paintings. Jinshan painters are starting to build up an international reputation for their naïve works. I appropriated images from photographs I had seen in museums, from photographs I took whilst visiting the Jinshan Painters Village and from books. I spent a day at the painter’s village looking at their works and environment.

The materials I used for the murals included broken commercial china pieces, Chinese commercial tiles, mosaic tiles and huge tubs of Ming pottery gathered from Jingdezhen (the birthplace of porcelain).

The shards were bought for me by a group of teachers who visited Jingdezhen. They had acquired them from an old man who has been “mudlarking” or digging up old, abandoned kiln sites in Jingdezhen for a  very long time. I was really delighted with the amount of shards I had to work with. They are very expensive to buy in shops in Shanghai, even broken shards.

As my mosaic work employs a “memoryware’’ approach, the use of the shards had great appeal to me. Memoryware is nineteenth century American craft practice in which women would attach keepsakes to the sides of vessels and keep their treasures or love letters inside. It also has roots from the black slaves who made shrines for their dead: they encrusted urns with the dead person’s objects and placed them at the burial site. I employ this technique as I like my shards to have intrinsic value or meaning to the story I am telling, not just used because they are pretty.

So using the Ming shards to tell a story about Chinese Festivals seemed like a great way to utilise them. To put them back into a work that was telling a more contemporary story.

I was also very fortunate to be given some of the Ming shards to take home, to incorporate into my own mosaic works.  I have been making a series called Mr Hanky Panky.  To create him I utilise shards and famous relics, or replicas of famous relics….he steals them…covets them… For example, two works that the City of Whitehorse acquired last year included Mr Hanky Panky and Theodora: Empress Actress and Whore and Mr Hanky Panky and the English Courtesans. Some other pieces in the series include Mr Iconoclast, a piece made using antique Venetian Gold smalti, a 400 hundred-year-old Jacobean Vase with Mr Hanky Panky holding a souvenir Caravaggio plate with Medusa decal. I have also made Mr Hanky Panky Steals the Ming. He is made from fine white porcelain bought from China, live cricket water bowls and doll arms holding the coveted Ming Shard.

The live cricket industry is one of Shanghai’s biggest money making ventures. They gamble on live cricket fighting. It’s quite bizarre, yet beautiful, as they create incredible bamboo cages and porcelain eating bowls for their critters. I caught many taxis where the driver would wear his live cricket around his neck and you can hear it making a rattling noise. I went to the flower and insect market and bought hundreds of the tiny cricket bowls to incorporate into my mosaics. Each small bowl is an artwork in itself.

I have been back to Shanghai several times since doing this commission and will be returning there in April 2017 to teach Art Education to Preschool and Early Primary School teachers. The more time I spend in Shanghai, the more alluring the culture becomes. Working with the shards from Jingdezhen and being exposed to so much blue and white ceramics, the cricket bowls and other ceramic ornaments has re-kindled my desire to return to my roots as a ceramist.

I hope to visit and work in the potteries in Jingdezhen at some point. I am itching to get my hands back into wet clay. In the meantime, I am using porcelain shards and other ornaments from my travels to create new pieces for my forthcoming Exhibition at the City of Whitehorse’s Artspace Gallery. My exhibition titled Irreverent Tales will contain some of the new Mr Hanky Panky pieces which celebrate my love of ceramics, its history and my desire to be a visual storyteller. 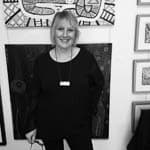 Pamela Irving lives and works mainly in Melbourne, Australia. She works across media including mosaic, painting and drawing. Her studio is open by appointment and is at 68 Patterson Rd, Bentleigh. This year Pamela is having a large solo exhibition at Artspace, at the Box Hill Town Hall. This collection of work titled “Irreverent Tales” will include pieces from 1984 until 2017. She will also return to Shanghai for ten days, teaching Art Education to Primary and Early Childhood Teachers and to the Chicago Mosaic School tutoring in mosaic.