The art of turban tying 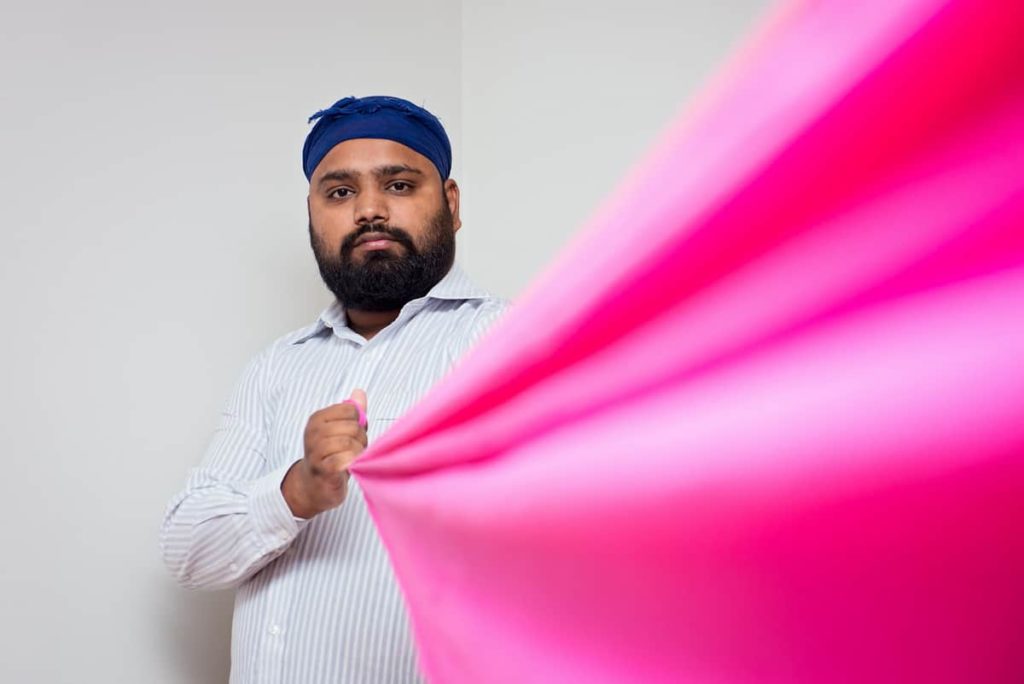 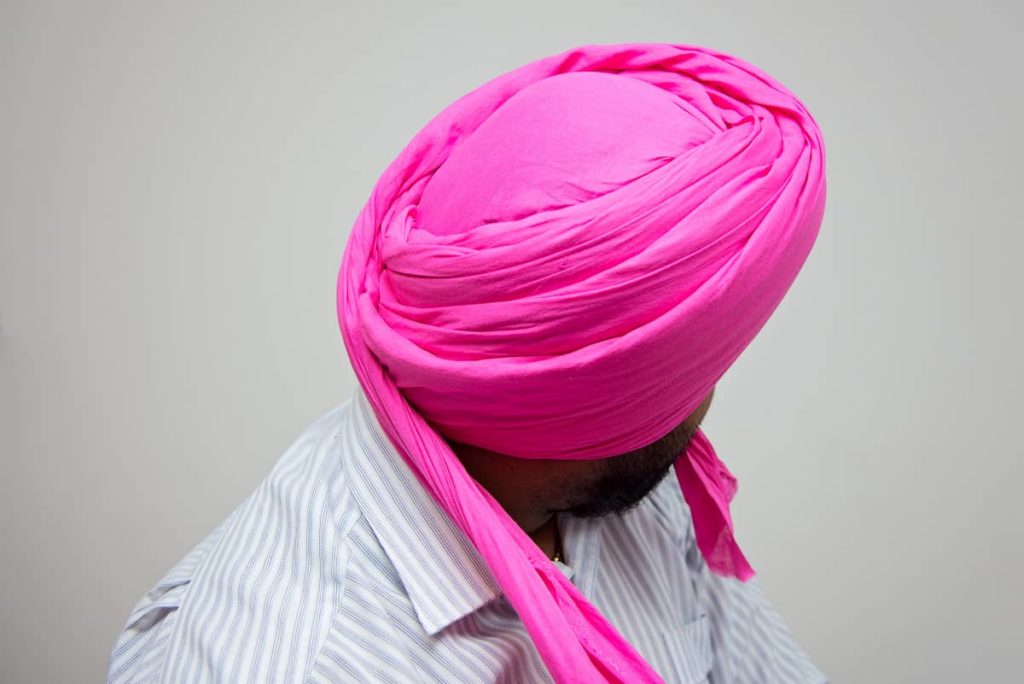 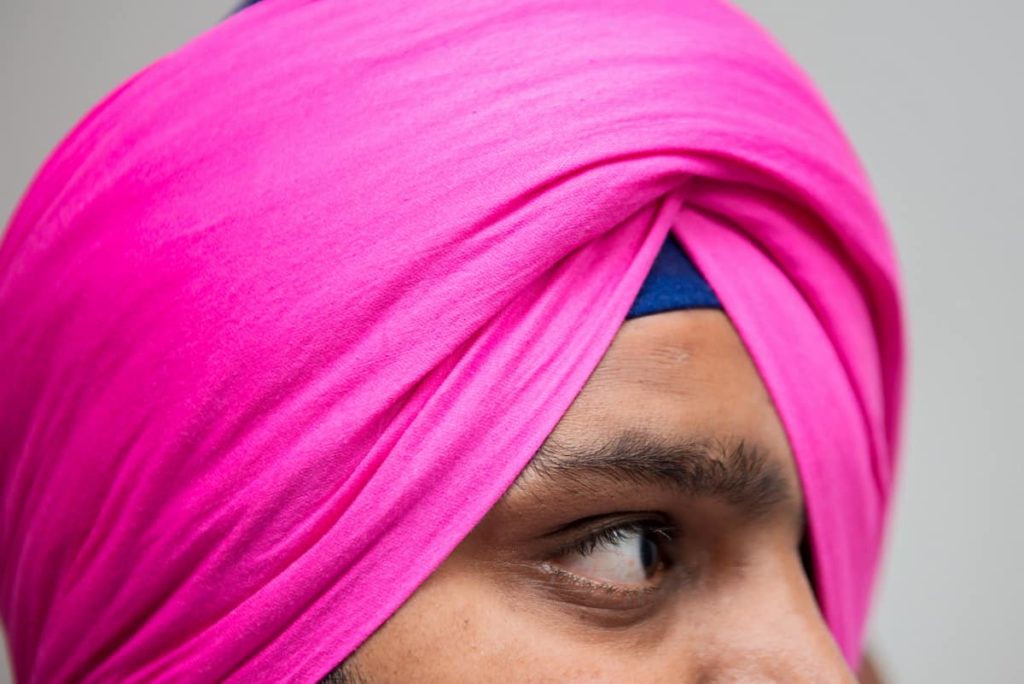 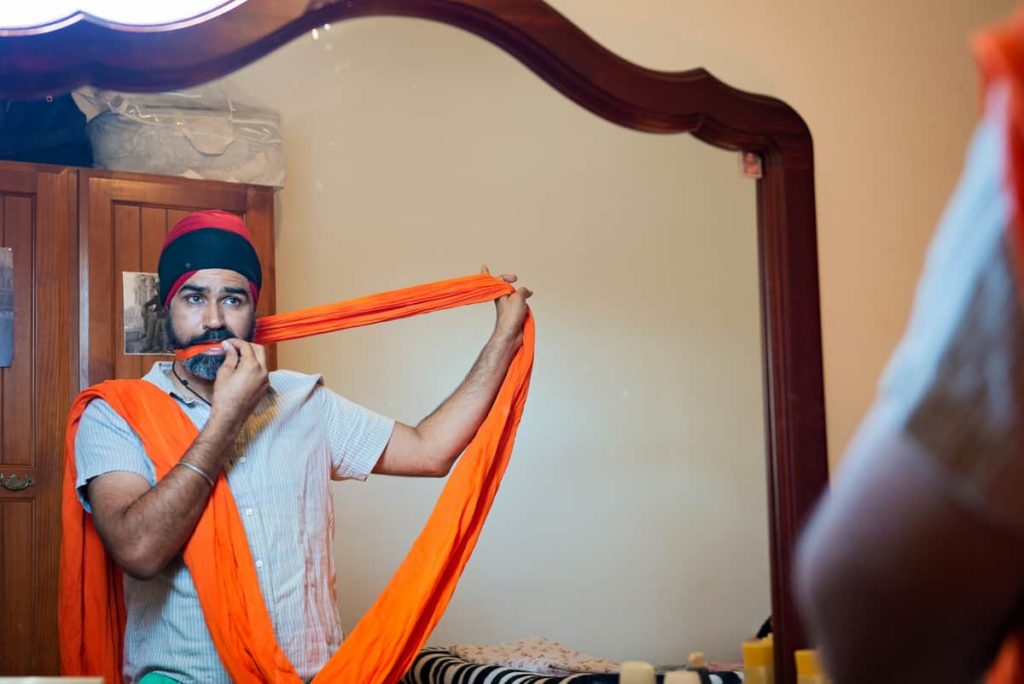 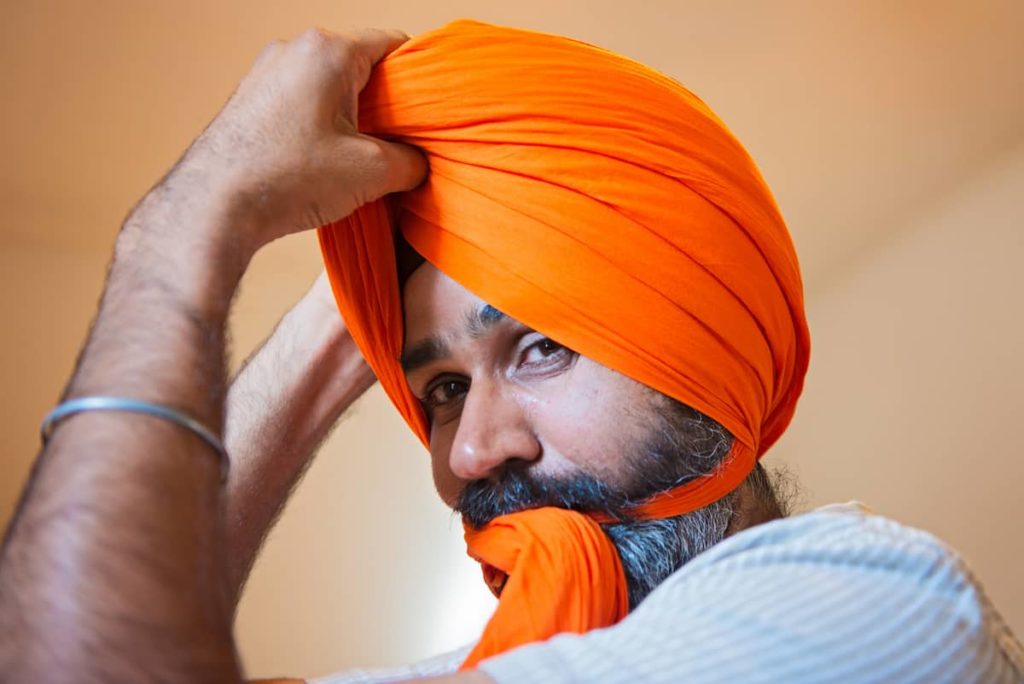 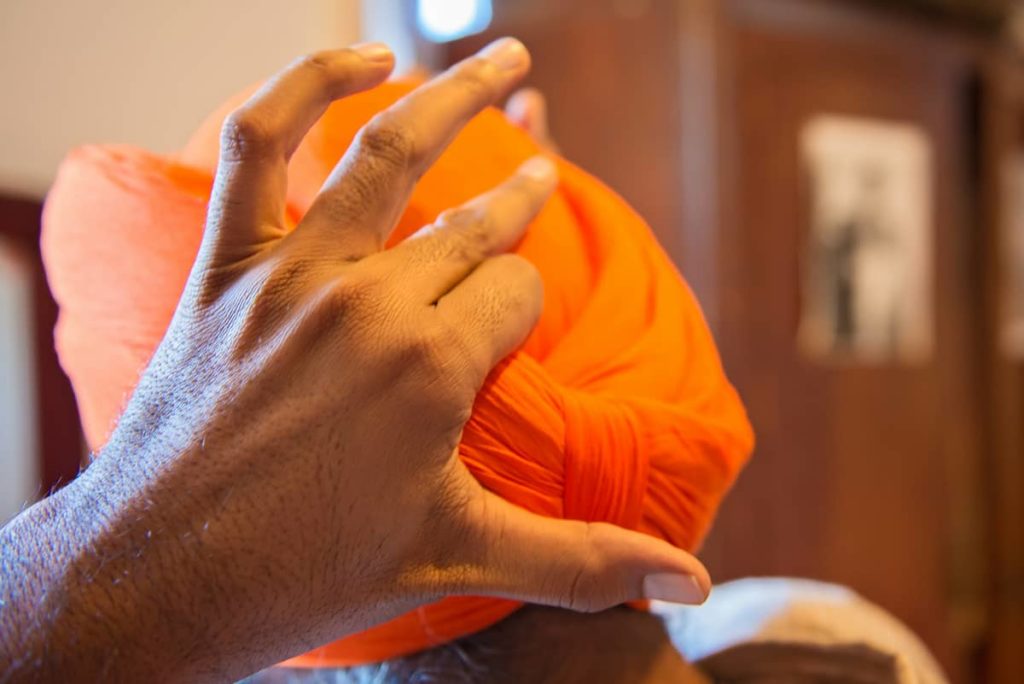 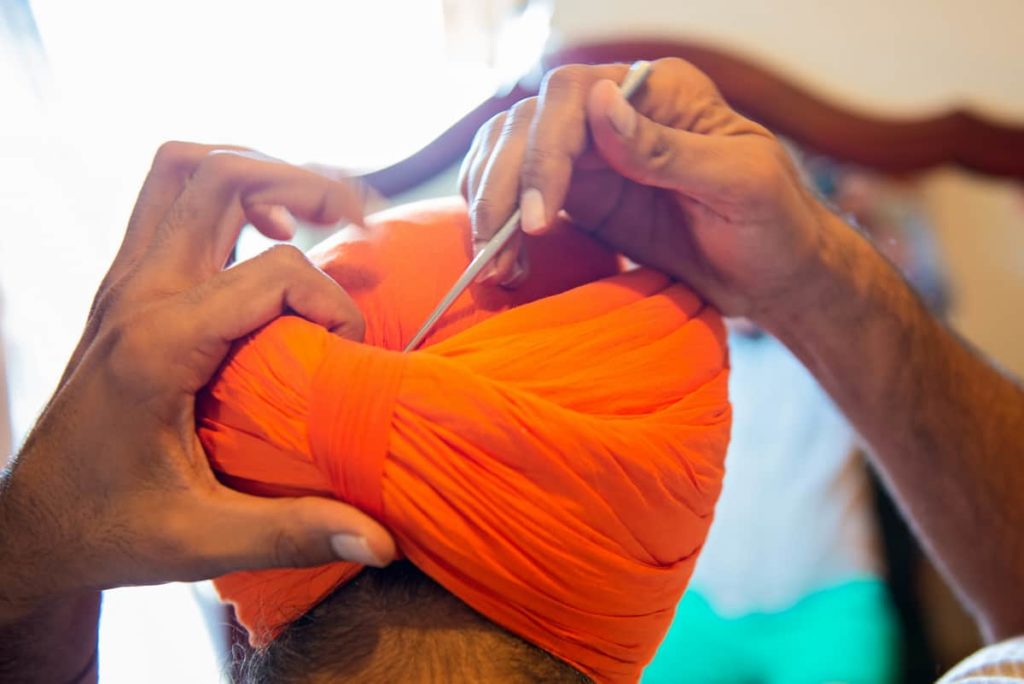 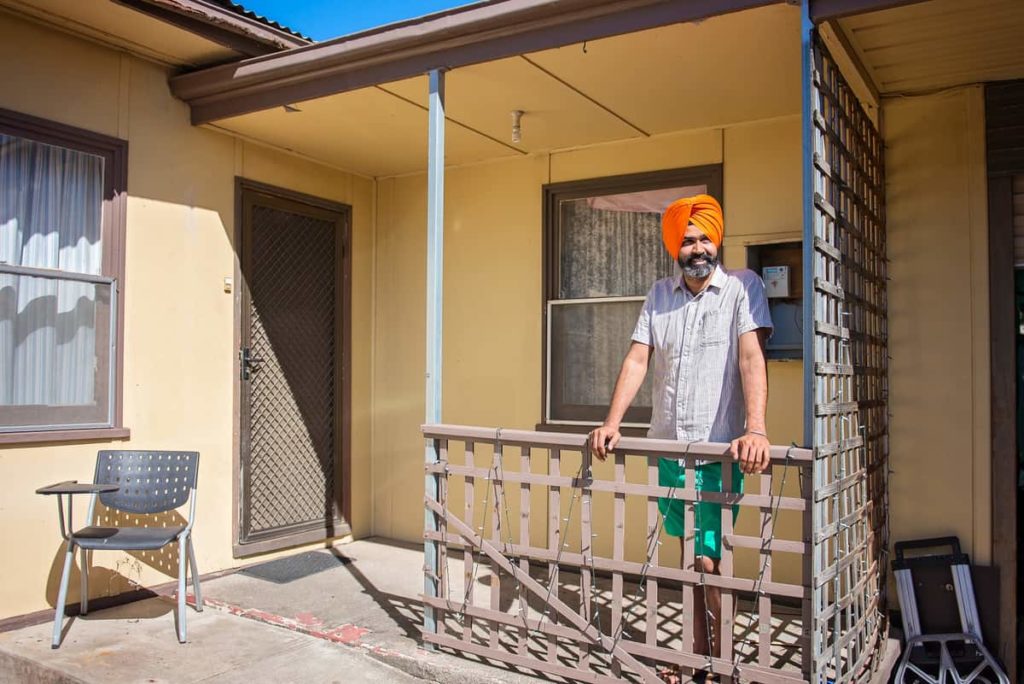 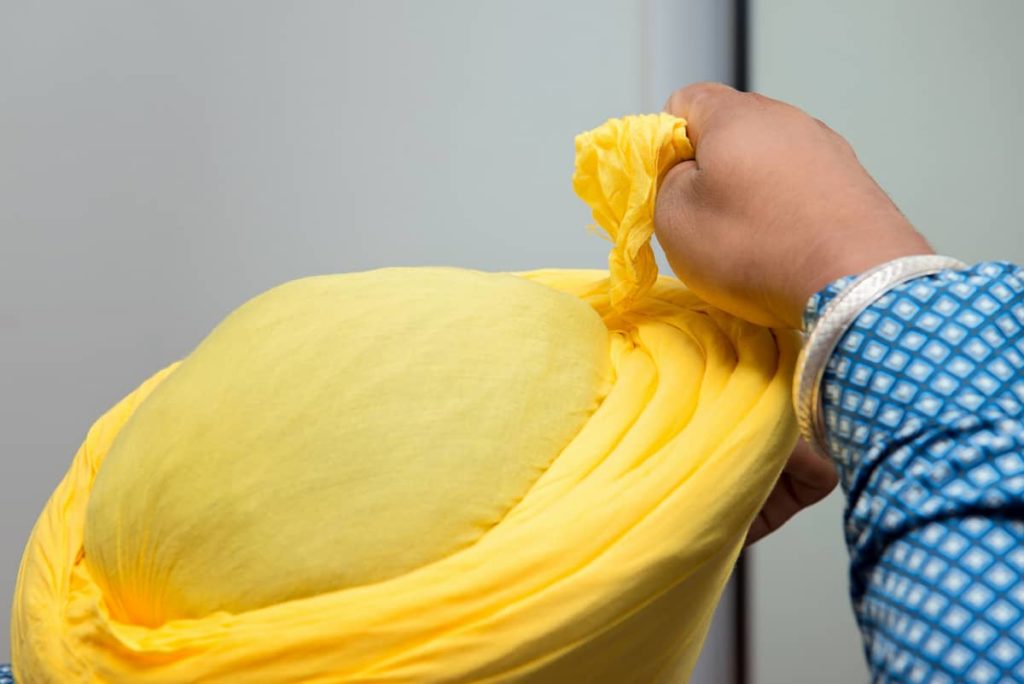 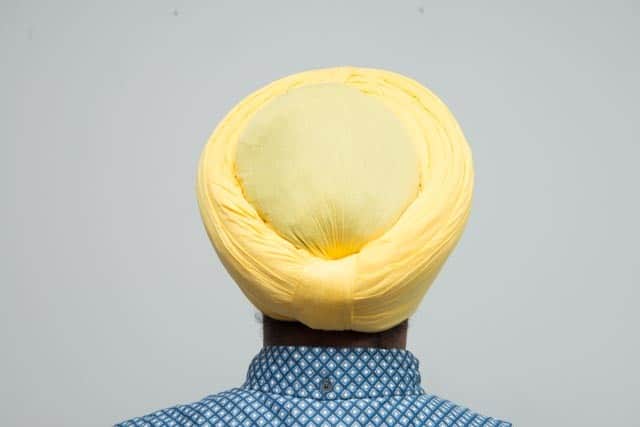 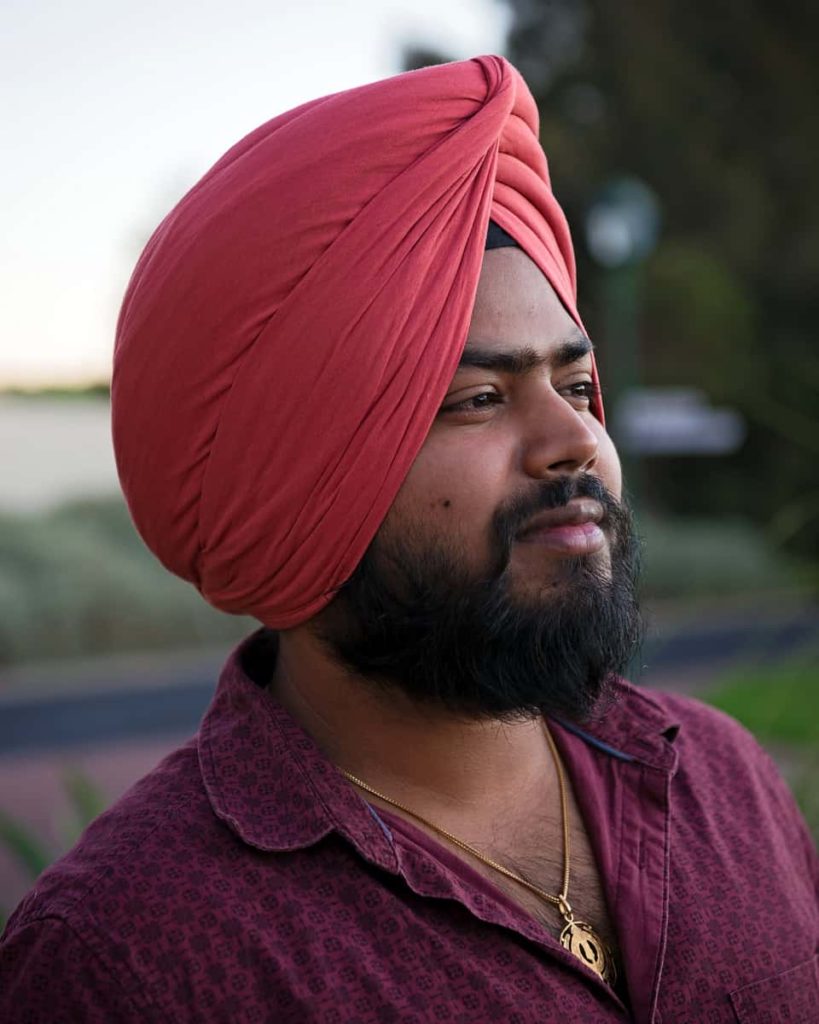 The Punjabi diaspora is a growing ethnicity in many Western cities. Canada has nearly half a million of Punjabi origin. Justin Trudeau’s new cabinet includes four Sikh ministers. In Australia, Punjabi is the fastest growing language. Most Australians have probably been in a taxi driven by a Sikh.  But what is known generally of Punjabi culture?

While Gopika Nath has revealed the story of a Punjabi women in the Phulkari, here we look at the textile that defines the Punjabi man—the turban.

Turbans are very personal and unique. Just like no two people are the same no turban is the same as another. Turban tying is an art which develops with the individual. My style has changed in just one year and will continue to evolve and be influenced by my experiences and spiritual connection.

When I tie my Turban I thank my Guru for blessing me with this unique look and I want to make sure I honour the trust he has placed in me.

Since wearing my Turban I have received so many positive comments—“it looks like a crown”, “it’s beautiful”, “looks regal”. In other situations, it has started a conversation about what is it and why do I wear it.

When tying the turban in Australia, I feel blessed. It makes me generous to others and a more responsible person and accepting the another challenge in my daily life. I think Australian people have accepted it they want it to be part of (our) culture.

Every time I tie my turban, I don’t see a flash of history or recite a particular verse in my head. I don’t recall my moral values as a Sikh.  Some Sikhs might do this and it is beautiful in its own right. However, for me the turban tying process requires complete and absolute focus. As I tie each layer of turban on my head I feel an adrenalin rush growing inside me. This rush peaks when I finish the last layer and all I feel is extremely secure in who I am and that now I am ready…ready to do something…anything…but it has to be positive or good. It must be selfless and loving…it must come from compassion and the heart.

Now I am ready I see myself in the mirror for a second or two and that is when the moral values kick in. I can only smile and grin at this stage

Why Sikhs wear a turban

“When a Sikh man or woman dons a turban, the turban ceases to be just a piece of cloth and becomes one and the same with the Sikh’s head.”

At the time of the birth of Sikhi, the majority of people in India comprised the lower castes: peasants, labourers and servants. Many were literally owned by the upper castes and were severely maltreated.

The Sikh Gurus (prophets/teachers) sought to uplift the downtrodden and make them the equals of the highest of the high. Guru Nanak, the founder of the Sikh faith, states in his divine revelation: Nanak seeks the company of the lowest of the low class, the very lowest of the low. Why should he try to compete with the great? Where the lowly are cared for, there lies the Grace of the Merciful Bestower.

The Sikh Gurus sought to end all caste distinctions and vehemently opposed stratification of society by any means. They diligently worked to create an egalitarian society dedicated to justice and equality. The turban is certainly a gift of love from the founders of the Sikh religion and is symbolic of sovereignty that is of Divine concession.

Sikhs take this gift of the Guru with them everywhere they go. Just by being exposed to this regal quality, their attitudes and psyche get shaped in a certain way.

In 2007 I worked for a gallery owner in india. He was a Sikh. We remain great friends today. I painted his portrait and it was my first attempt at a turban. Observing an object closely enough to reproduce by hand brings you into relationship with it. I didn’t realise how elusive the shape of the turban is. It found it impossible to translate. It continued to look like a lump of something sitting on a head and not the seamless sculpture that is both geometric and organic, pointed and rounded; that seems to have angles that are curves, that seems solid but dissolves as soon as one removes it, that is folded and wrinkled but also smooth. That sits above the head and also joins the head. I remember Rajwant saying it should cover his ears and almost touch his eyes and there should be five folds. Later when we travelled I saw him remove his turban before sleeping and then helped him stretch the 8 metres again before  tying the next day. I felt like I should avert my gaze, like he was naked upon revealing his uncut hair, but there was no shame. It was a practical act—devotional and domestic. His turban carried status, but also humility. I was welcomed into a new world founded on the seemingly contradictory idea of proclaiming a separate identity in order to dissolve the barriers between all living things: the practice of Sikhi.

In 2010, I met Lakhvir Singh in a taxi in Adelaide. I asked him if I could make his portrait. This quiet, gentle, profoundly strong young man agreed. The portrait lept off the page this time. I hardly remember the process. Each fold and curve in place. That beautiful half moon shape, that rounded square, the shadows and depth of gravity defying folds. This time I was tracing the lines of the turban, crafting the craft.

I learned about the ‘fifty’, the small cloth worn by some, that sits on the head under the pagadi or Dastar as the Sikh turban is also called, creating a contrasting triangle to match the tie, or to remind the wearer of a promise to be kept. I learnt to read political, religious or fashion statements or nationalities (Indian, Kenyan ,Western) by the style of turban. I learned about women’s turbans and children’s. But most significantly I learned that the Sikh turban represents for me an incident that underlines my practice as an artist.

The tenth Guru (teacher) of Sikhi Guru Gobind Singh, as a young boy saw his father severed head brought to him. He was executed along with three other Sikh men who came to support him, in front of a crowd of hundreds, because he stood for the right of a group of Hindus to maintain their identity thus escaping forced conversion. Later as a man and leader of the Sikhs, recalling the fact that so few stood up with his father, Guru Gobind Singh declared that no Sikh should hide from the duty to stand for the basic human right of all people to be who they were meant to be: to bear out their birth identity. The Sikhs, he said, will wear a turban to be known by all as upholders of liberty and challengers of tyranny. This act of sacrifice for people of another community is of tremendous import then and now.

The Sikh turban for me, says “I will absorb xenophobia so you don’t have to”. It is a shield to protect diversity, a lightening rod that’s says “Bring it on” or “Just you try and be a bully mate, cause you ain’t gonna get past me.”

It is a tool to construct cohesive and respectful societies. It is a finely crafted soft sculpture made by strong women and tough guys with a conscience and soft hearts.

The names of those in the photos: 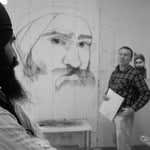 Thanks to Daniel Connell, whose practice as an artist involves making portraits of Sikhs. The photos were by Adelaide photographer Saravanan Ravichandran who can be contacted here.

Cracking the colour code: The Maiwa-Khatri partnership
My grandmother’s hands: Nina Oberg Alaifea and Stephanie Oberg
FRACTURE - show on textiles at the Devi Art Foundation
The quilts of Jess and Cynthia Johnson: A mother-daughter partnership
Batik journeys between the three worlds: Here, there and everywhere
Ankara print histories alive in the streets of Johannesburg
太陽が作りし影
Many stitches in time: the work of Annabelle Collett