With the tip of a needle 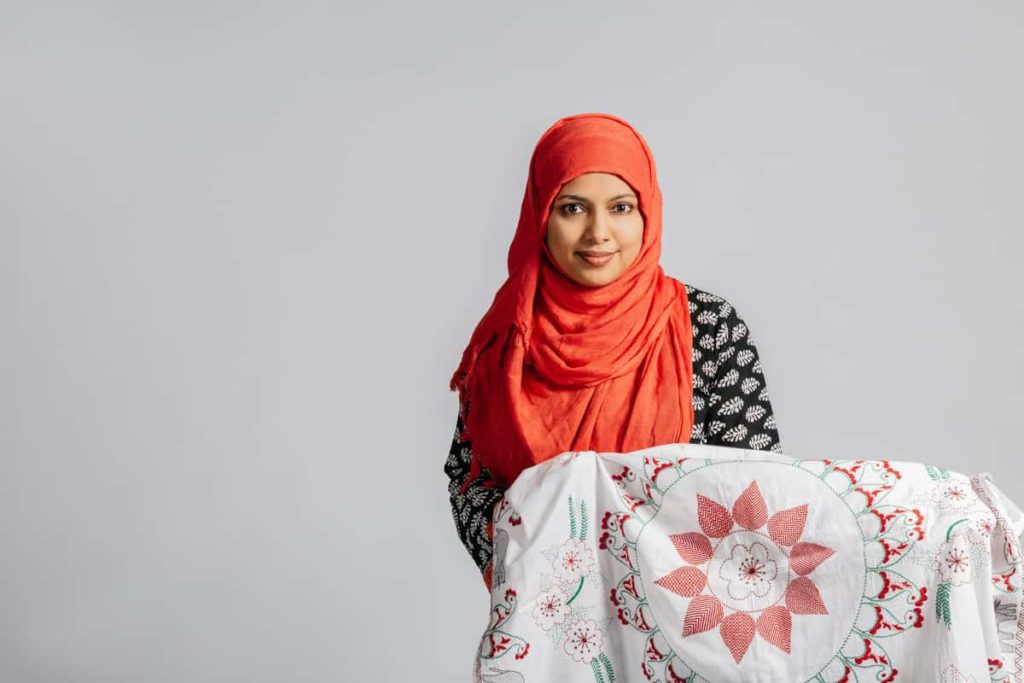 A fine needle, a loop of yarn, a hand moving, thread drawing through fabric, and repeat.

Stitching is a nuanced language spoken mainly by women in local dialects that are recognised across global cultures. However, as often happens with women’s hand-work, the embodied knowledge of traditional skills learnt in childhood is taken for granted or thought of as irrelevant in today’s networked world. That is, until life offers an opportunity to re-engage with personal knowing from another perspective.

That shift in seeing came for three central Asian women embroiderers when they were asked to lead workshops for the Guildhouse Traditional Crafts Skills Program. Personal knowing unfolded as artistic and technical expertise in making and teaching regional embroidery. When speaking to them individually over the past months I discovered that what also emerges in the shared social space of the workshops is a reconnection with the material cultures, social and economic histories and technologies of their motherland. 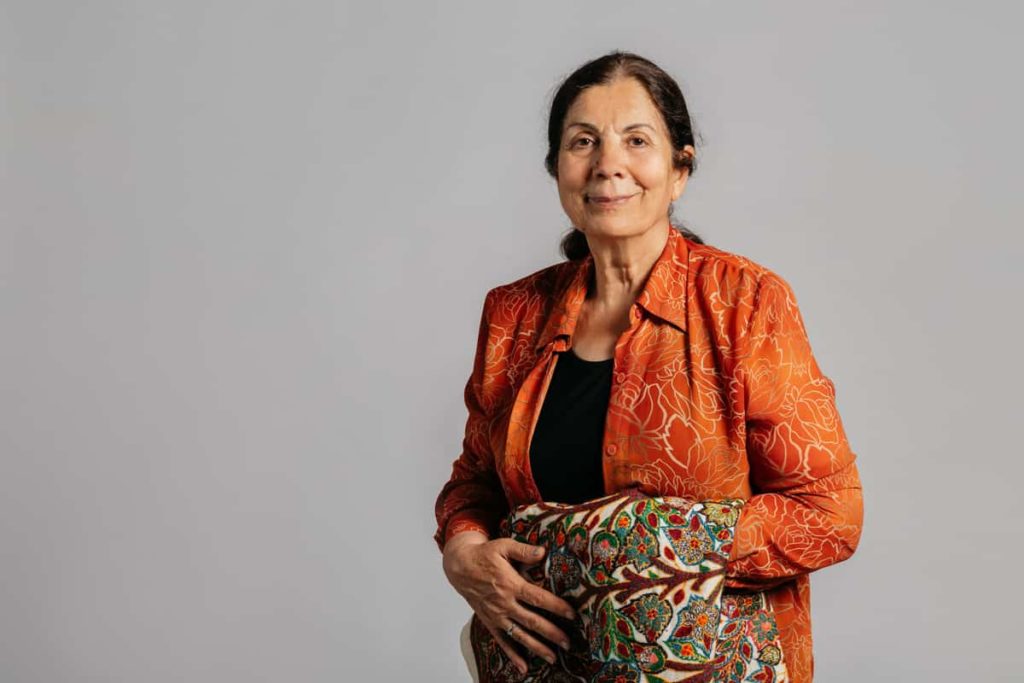 Tracing the curves of Akhtar Esmailzadeh’s richly coloured embroidery with my fingers, I feel how the fine durable Persian wool differs from its softer thicker Australian counterpart.  Lyrical and lively, the flower and bird-filled tree reaches into every corner of its woven ground. Akhtar, who was a high school teacher in Iran before coming to Australia to avoid persecution for her Baha’i faith, tells me she stitched this Pateh for six to seven hours a day over eighteen months.

Growing up in the southern Kerman Province, Akhtar learnt the designs of Pateh, including the flame shaped boteh motif, from family members. Half a century later, when teaching the design in her Iranian Embroidery workshop, she relates the lineage of boteh. Its journey over 2,500 years from middle Asia into contemporary visual language is a convoluted tale of money, power, conflict and migration.

Akhtar draws the original boteh motif for me – the straight and tall cypress, the tree of life and essence of ancient Zoroastrian philosophy. Folding the top branches of the boteh sideways she says is a metaphoric bending under the weight of the Muslim conquest in the 7th Century. However, the resilient roots of Persian culture stayed firm.  In the following centuries, Zoroastrian refugees took textiles skills and the motif with them to India.

The teardrop symbol continued its journey as British soldiers and Dutch traders in the 17th Century brought the oriental boteh silk and wool shawls to Europe. Exquisitely woven and intensely dyed in scarlets, oranges and greens with exotic pomegranate skins, henna and madder roots, ensured the designs’ popularity. Becoming known as paisley in the first half of the 19th Century after the west Scottish textile town where the pattern was most successfully reproduced, boteh surprisingly morphed into the emblem of psychedelia and expanded consciousness the 1960’s.

Tracking boteh’s dislocation across empires and its shift in meaning across time, strengthens it as a potent symbol of endurance. Now with wisdom gained through age, Akhtar values her embroidery far more now than when she was in Iran. Stitching binds her native land to Australia, enabling her to make a rewarding contribution to many communities through teaching and telling. 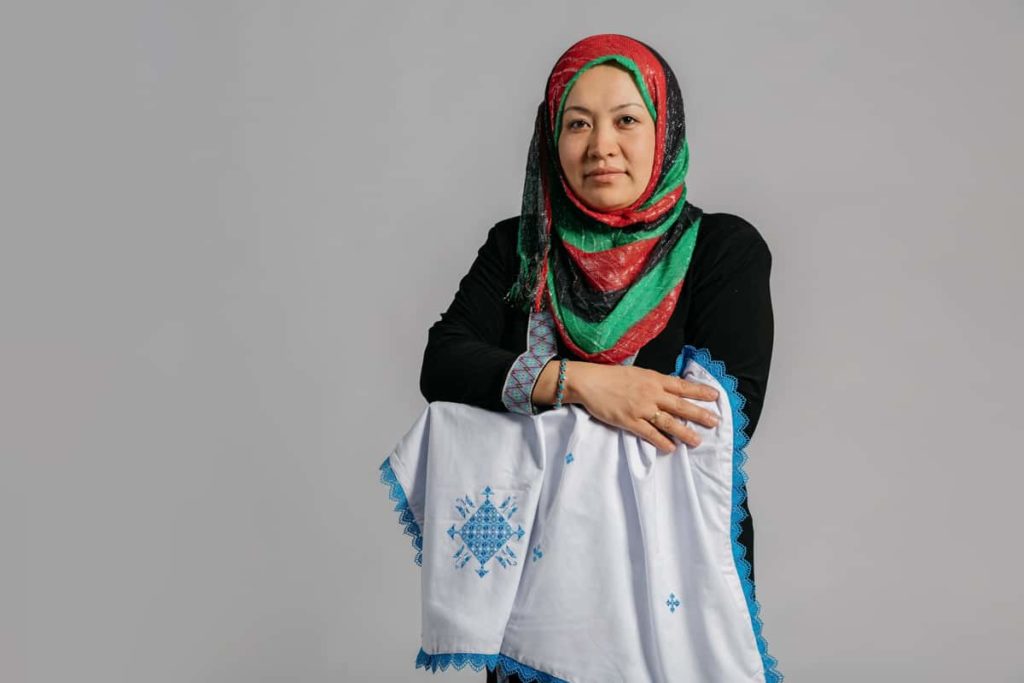 Heavily pregnant, Horya Yosufi points out the blue and white butterflies edging the baby swaddling she has stitched in Afghani silk thread on cotton.  It is so fine I can barely see the weave. Translating for us, her brother-in-law Abbas, likens the embroidery’s square geometry to the pixilated digital aesthetic of Minecraft  – a computer game played by her older children where one builds everyday items using cubic blocks. I see his point, however her hand-craft has a softness and refined resolution honed by two decades of stitching patterns learned from her mother and her sister in Afghanistan.

Horya’s light reflecting white-work dances before my eyes – white silk embroidered into the long white wedding tunic she made for her husband Hassan.  Inspired by complex Islamic geometric patterns, her stitching speaks of delicate precision, mathematical acuity, attention to detail, the steadiness of a surgeon’s hand, keen eyesight, and a sharp memory for thread counting.  It is a minimal aesthetic of texture, with three-dimensional forms in stitching and beading rising from the fabric plane.

Maintaining the traditions of embroidery especially for marriage dowries is a complex matter of honour. It is both a demonstration of good character and a tactile material connection to home in pillowslips, curtains or TV covers. Many of Hoyra’s Hazara ethnic group have died at sea trying to seek asylum in Australia, or like those rescued by the Tampa, were sent to Nauru.  Hoyra’s family has flourished since she arrived in Adelaide six years ago, reminding me of James Clifford’s observations of people surviving conflict “adapting and recombining the remnants of an interrupted way of life. They reach back selectively to deeply rooted, adaptive traditions: creating new pathways in a complex postmodernity. Cultural endurance is a process of becoming.”

When teaching new stitches in her Afghan Embroidery Workshop, the intense concentration of thread counting is broken with laughter as Hoyra encourages beginners by anthropomorphising the task. If the fine thread of a tunic for a son breaks many times then the son will have a long life; if the stitching is finished quickly with little breakage the garment’s intended wearer must be of good character. Each object Hoyra stitches has a unique character – a blend of tradition and innovation with no ownership of style. Like the networked world, once someone is seen wearing a great new design it will go viral, being quickly copied across the community.

For Masuma Akther the language of stitching is versatile. It speaks through classical motifs, sacred symbols and folk art traditions.  Originating with rural women in Bengal, Nakshi Kantha recycles many layers of old saris into warming quilts. Made communally, the saris are sewn together quickly with running stitch, then rich threads are drawn out from different layers of fabric. Water is a central common motif along with the sun and moon, wide open petal lotus, the rose, humans, elephants, and chickens which are embroidered into everyday stories, interweaving myth and memory, send secret messages or to celebrate special occasions.

While some Kantha document social and political history such as the period of British occupation, with soldiers stitched around Bengali motifs, Masuma prefers to make work about the positive aspects of life – to affirm gratitude, celebrate rural life, belief in love, to contemplate the beautiful.  With a Master’s Degree in Botany she has detailed knowledge of plant biology, but her flower and plant motifs are faithful to the stitches and styles she learnt from friends through living in many regions of Bangladesh as a child.

She was drawn to the arts and design, but like many young women in Bangladesh felt the pressure to pursue a career in sciences. Her father was worried stitching would keep her from her studies. After migrating to Australia in 2009 and researching her own traditions in order to lead the Bangladeshi Quilt Workshop, Masuma gained renewed respect for Nakshi Kantha. Stitching intuitively—half from her mind and half from her hand—Masuma says she feels the soul of the craft. For her, the practice creates a connection to other embroiderers across cultures and time, a window into their thoughts and how they express their lives.

Celebrating stitching and design for aesthetic value detached from cultural meaning is a global tale. Time-poor women in Bangladesh and beyond buy Kantha made in new materials, hand embroidered to a manufacturer’s design in rural villages. Conversely in Australia, to embroider for personal use is often the privilege of those with economic means. Masuma now works closely with fashion designer Sally Phillips creating intricate embroidered and beaded neckpieces. As Kantha becomes special to others through the workshops, it reiterates for Masuma that every person and culture bring unique skills and assets to develop a plural society.

My conversations with Akhtar, Hoyra and Masuma, all interestingly reveal that the majority of workshop participants want to learn traditional techniques for their own sake, rather than to adapt to contemporary practices. I see the appeal of metaphorically stepping into another realm driven by a generosity of spirit and delight in sharing treasured skills with people of very different cultures; a realm guided by stories and stiches, by adherence to tradition.

Does preserving the embodied experience of communal stitching immersed in the alternative social space of a time-honoured practice keep a culture alive? The trio all attest to adaptation in their embroidery workshops—utilising local materials and teaching less complex and time-consuming designs. It is a process of being in the present and respecting what they have to work with. Newness and tradition must coexist in the age of diasporas. Children growing up far from their homeland, shaped by new cultural environments, add to family diversity and resilience.

All three women agree that the future of their craft rests in both teaching their skills and impressing its cultural value into a younger generation of stitchers. Hoyra glances at her two year-old daughter, wondering if, in thirteen years when she would traditionally begin to embroider a dowry, the world will be too enticing to spend the time at home patiently crafting a future.

While it is certain the multivalent female hand will endure, how stitching evolves as differing cultural traditions fuse, is a tale yet to be told.

Guildhouse has developed and delivered a workshop program since 2010 that links culturally and linguistically diverse craftspeople from emerging communities (primarily refugees) with South Australian artists and members of the broader community. Each workshop offers participants an in-depth opportunity to learn new skills and to develop an understanding and appreciation of a unique culture, and provides workshop leaders with employment and valuable professional development opportunities. The program facilitates healthy connections within the wider community. 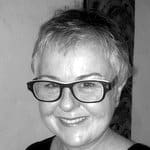 Currently based in Adelaide, Melinda Rackham is a free-range writer, curator and artist with a background in sculpture, performance and networked media. Holding a PhD in Virtual Art and Culture she worked in Australia, Europe and China for a decade in curatorial, editorial and leadership roles. More recently Melinda’s focus has been on fictive memoir and writing on interdisciplinary and contemporary art. Her monograph on maker Catherine Truman will be released in July 2016. Website: www.subtle.net