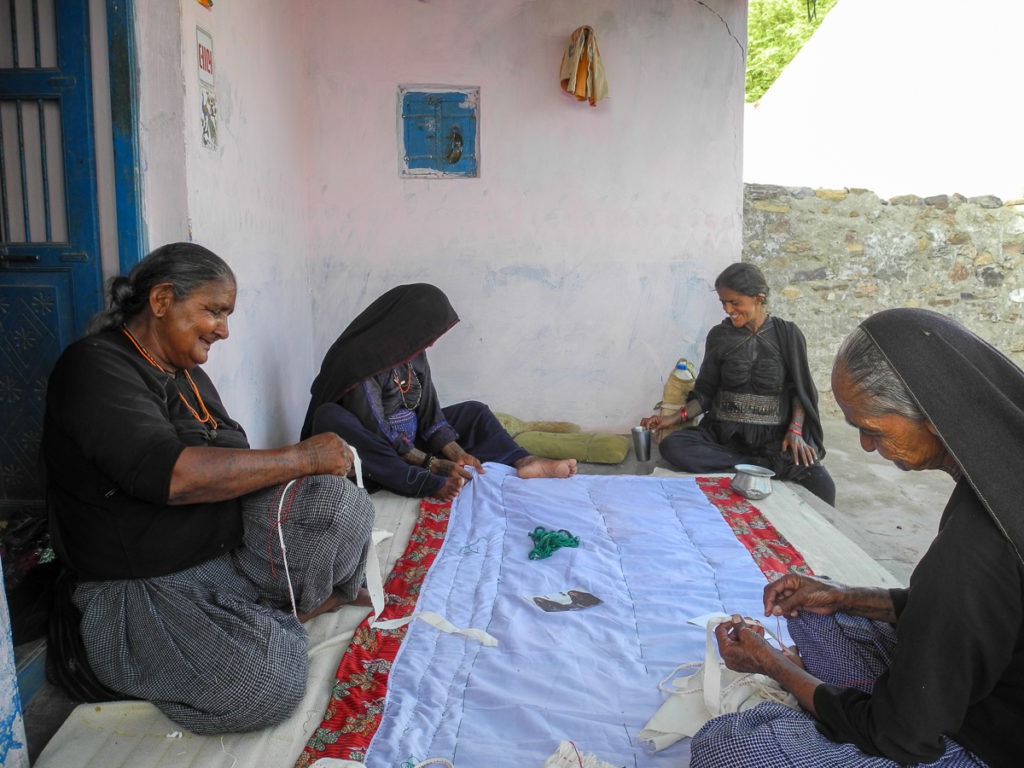 LOkesh Ghai finds himself in a song by his Kutchi hosts and now argues consumers should learn to sing the words that made their purchases.

Wasn’t it easier to learn alphabets by singing?

Were you too, as a kid, introduced to counting in a rhythm?

I bet you too have a few tunes when turned on, makes you join in singing.

Songs are a mirror to times and cultures.

Songs tell stories, imparting values, technical and cultural knowledge, in a way that is entertaining, and easier to retain.

The Kediyun is an overlapped upper garment worn by the men of Ahir, Patel, and Rabari communities in Kutch; and almost two generations ago it was even worn by men of other local communities such as the Vankars, Meghvals. The garment is always white, and for special occasions, it is hand embroidered. In recent times, the garment is popularly machine embroidered, and sometimes machine and hand embroidery is combined.

Traditionally, women never stitched for commercial purpose, embroidering and stitching clothes only for their own families. Regional garments were made by the women for their families.

While learning to make the garment by hand I recorded songs sung by the women.

Like most regional clothing articles, kediyun is an identity marker of communities and sub-groups within a community. The cut and detailing of each subgroup is different. For example, the kediyun of the Parathariya Ahirs differs from that of the Machhoya Ahirs; and the kediyun of the Dhebariya Rabaris differs from that of the Kachhi Rabaris. Within the sub-sub-groups, there are individual design innovations. The same is true for songs. There are folk songs of communities with an overall common concept; each community usually has its own variations within the concept. The details of the songs would then vary. The oral tradition allowed room for innovation. Kutchi is a language quite distinct from Gujarati, it does not have a script. Hence, oral traditions become even more important in transferring knowledge from one generation to another. Often, the knowledge is sung as a song.

Songs are usually personal expressions for women. Songs are sung in the context of ceremonies such as weddings, festivals or while stitching. I learnt the craft and hand stitching of the kediyun first form Jamanben Ahir; thereafter from Bhaddiben Rabari and Puriben Rabari. In the initial days of my apprenticeship, most of the time was spent with very little conversation while stitching. However, once I was more familiar with them, neighbours started to visit. After a point, I became part of their daily schedule. Both my teachers shared with me various songs related to the kediyun. Towards the end of my apprenticeship, Bhaddiben along with Puriben and their neighbour Hasuben Rabari sang songs for me, and one that even mocked me! 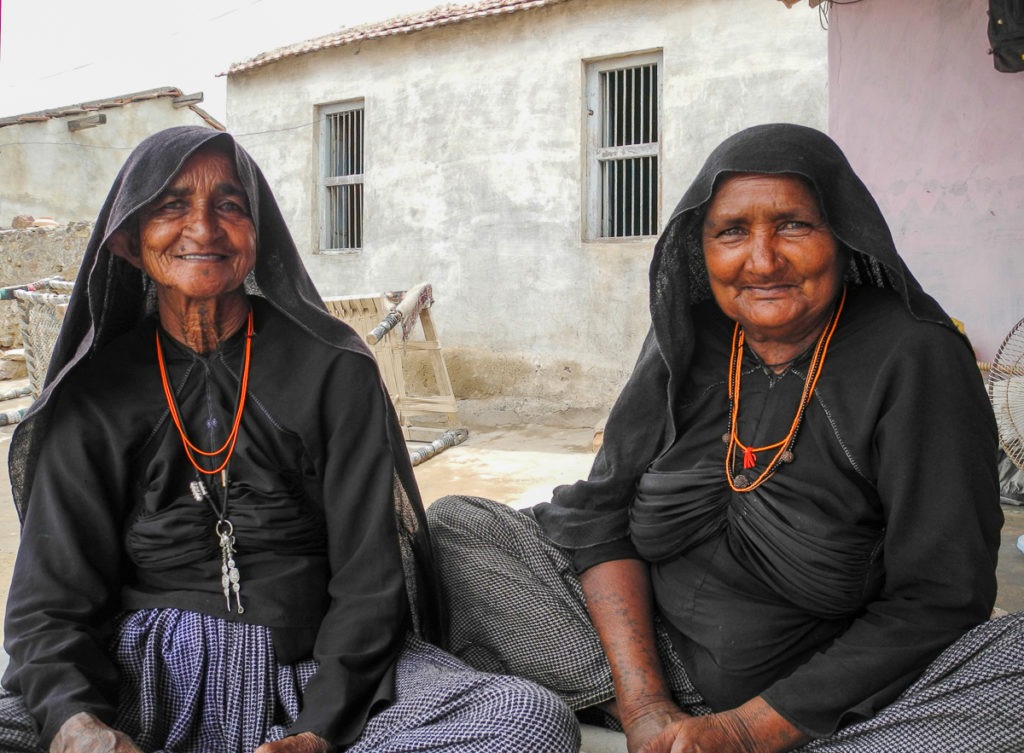 This song is set at the time when Lord Krishna (a major deity worshipped by Hindus) is ready to migrate from North India to West India (Kutch). His disciples do not want their Lord to abandon them, so they hold onto his kediyun. Krishna responds by saying, “Let go of the chaar of my kediyun, else the kediyun would tear apart, the tie-up would break.”

The song illustrates the significance of the kediyun in Machhoya Ahir culture and how the kediyun acts as an agent between the divine and his disciples (the Ahirs). It is important to restate again that neither the Ahir nor the Rabaris have been engaged in much textual writing. Oral dissemination of their history has continued over the centuries.

The song further illustrates the detail of hand stitching of the “char”, the lower part of the kediyun, the action of the needle is diagonal in direction. The movement of the needle in a diagonal direction is an important detail as it is one of the distinctive elements of distinguishing if the kediyun is of a Machhoya Ahir or a Vagadia Rabari. The song serves to transmit technical knowledge as well as emphasize the identity of the maker. 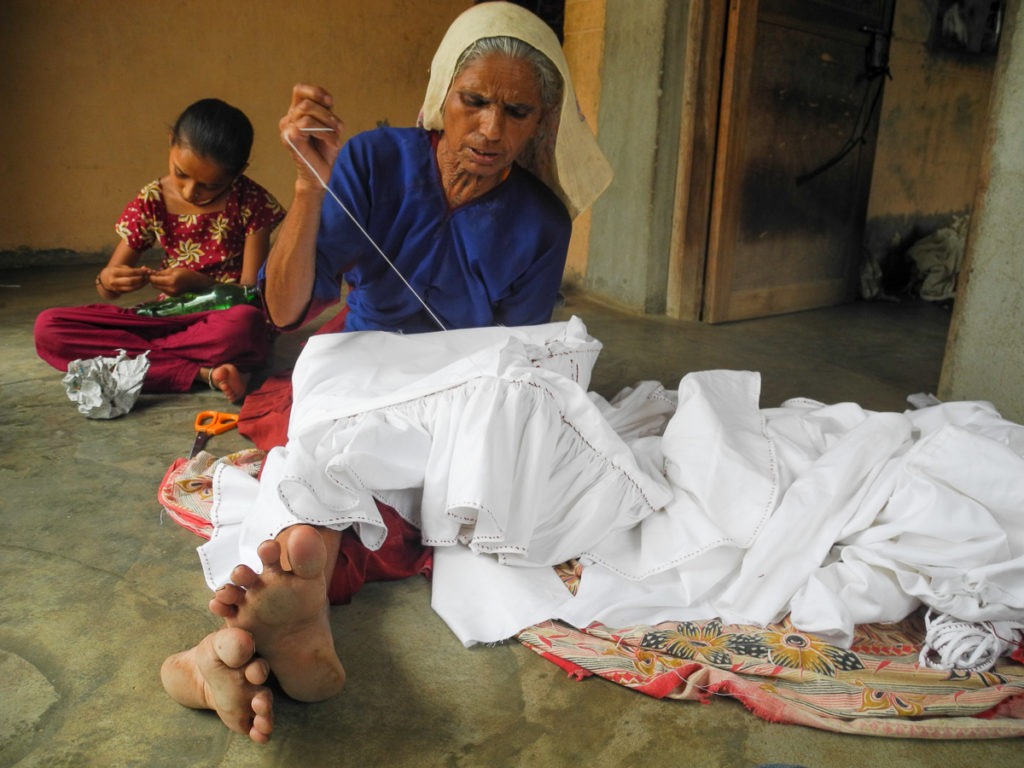 The next song is a Phatanu, a style for wedding songs that has a humorous take.

Phatanu, a ritual insulting song, is sung for in-laws at weddings. In this song, the kediyun becomes an agent that introduces the two sides of the family. Marriage in Indian villages is seen as not just as a union between two people, but two families and by extension villages. The kediyun in the song symbolizes tradition and implies a way to ease this union in a comic way amongst the stress of elaborate wedding ceremonies.

Next is a devotional song: “O Ram let me worship you… Let me wear the kediyun with backstitch…”

The song lists emotions and desire that a disciple wishes to do as part of dedicating to God. Wearing of kediyun is one of these, perhaps suggesting the wearing of a traditional garment as a proper way to show respect.

The next song tells a story about me, the researcher: 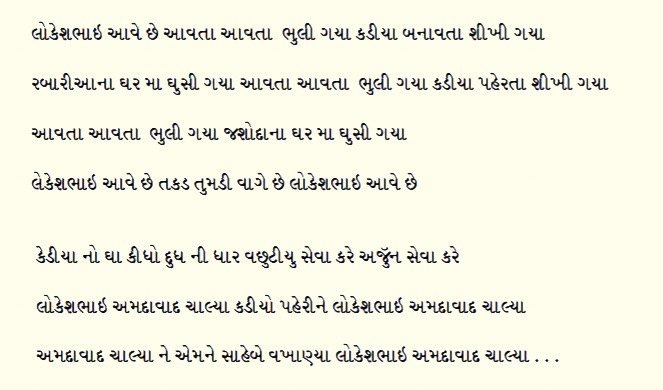 During the last days of my apprenticeship, Bhaddiben composed a song to honour my learning experience. The song was an unexpected and gratifying experience for me. It indirectly expresses a personal relationship that was formed between me and the Rabari maker of the kediyun. I was also surprised, as this was a new song based on a traditional format. Thus I observed first hand the storytelling role of songs. Women innovate in traditional songs in order to tell a story, keeping the songs current and relevant.

The chart depicts a thematic analysis of the folk songs that culturally contributed to the construction of the kediyun telling various stories. 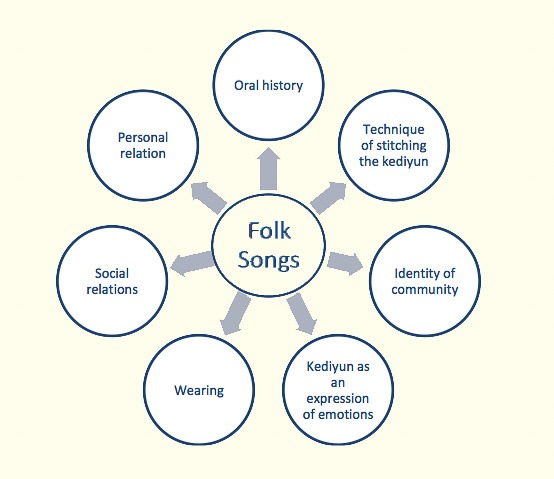 A tentative translation of all of the songs was done with help of Dayalal Atmaram Kudecha and Lakhabhai Rabari. A special thanks to Judy Frater, Amanda Ravetz, Alison Welsh and Kevin Murray for suggestions and encouragement.

Layerscapes: Colonial history on a thread
Weaving the feathered serpent
Ankara print histories alive in the streets of Johannesburg
The Macanas of Gualaceo: Ecuadorian ikat
Following nature’s rhythm: a season on the field as a Linen Steward
Pohon Budi - the Tree of Life exhibition in Malaysia
The embroidered house
Academic and weaver join head and hand in Bandung