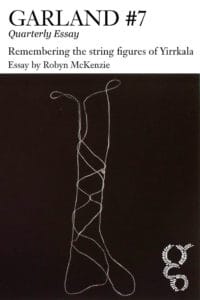 I was looking through the Pacific section in Parson’s Bookshop near the art gallery in Auckland when I came across a group of small thinnish volumes all with similar titles: String Figures of the Tuamotos, Tikopia String Figures, String Figures from Pukapuka. It was December 1999, and I was visiting Auckland for a conference. All of these books had a similar format. The main body consisted of illustrations of different string figure designs accompanied by the instructions for making them. The brief introductions gave some contextual information on the making of these collections of repertoire, but there was no further analysis or explanation. These were specialist publications, the purpose and significance of which was not clear to me. They were not inviting a general readership.

I had not come across string figures before. I never played the game commonly referred to as “cat’s cradle” as a child. This was something completely new to me. I was an art historian by training and trade, and yet here was a form of visual communication I knew absolutely nothing about. Not only that, but surrounding it was a developed field of study—one of the publications, was in a velvety dark green card cover, an occasional paper of the Royal Anthropological Institute of Great Britain and Ireland. Esoteric, occasional, obscure, this was the “academic exotic”—Pacific Islands and the RAI, blue lagoons and marbled end papers. I didn’t allow myself to buy those books then and there, for what might be just another passing curiosity. However, returning again in 2003, and finding them still on the shelf as I had hoped, I did purchase them then. The curiosity had stuck…

To find out what Robyn McKenzie then discovers about the life of string figures in Yirrkala today, read her quarterly essay, available to the subscribers who make Garland possible.

Beyond pink: The moment is the haven
Kuyu Kuyu: A place for weaving stories and cultural resilience
Artifice as allegory: Sylvia Nakachi investigates evolving Indigeneity in the To...
Lessons learned from a duck herder’s gamelan 🎵
Vessels of love: Darug weaving that connects generations, community and country
Tania Larsson ✿ Hide uncovers the hidden
Talk of the town: How do you balance love and money?
Balnhdnhurr: a mark for others to follow