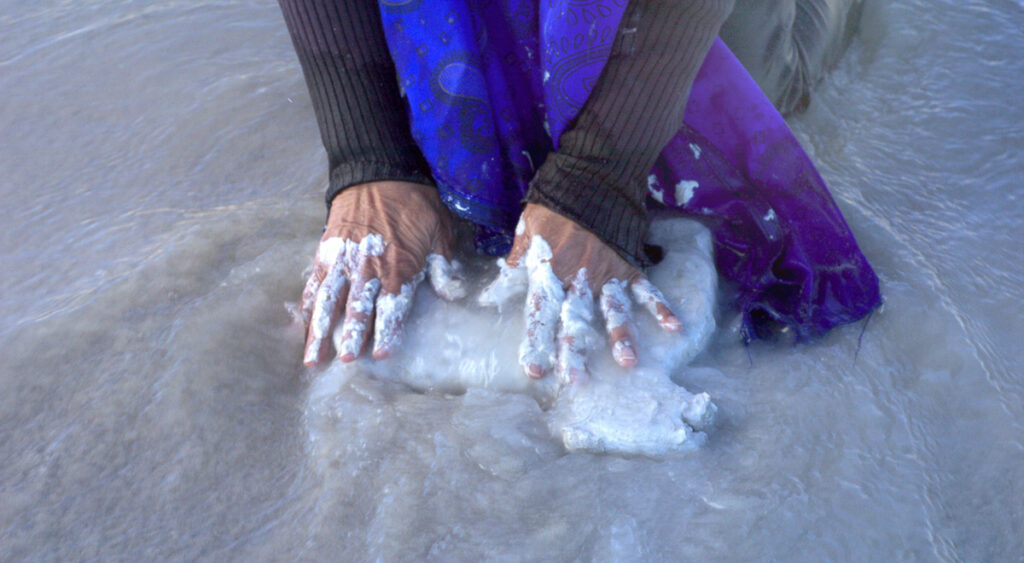 Arif Satar & Audrey Fernandes-Satar create objects of offerings for the lives displaced during the practice of indentured labour when the Indian Ocean was seen as a “British Lake”.

She walks beside me holding my hand tightly, my grandmother, up the long path. I can smell the damp earth. We come around the corner, I can see the silhouette of people standing in the sand moving in and around the border of the water. She uncovers a vessel of sorts in front of us, ushering me closer in. The sunlight is dancing over the water covering and uncovering the silhouette of large painted vessels with lids that sit like decorative hats, crowns of colour. I let go of her hand, my grandmother and run to the water. My arm is submerged right up to the elbow, I move my fingers touching the vessels gently with my fingertips gently, to save them gently, they melt away soothingly into thousands and thousands of pieces… and I hold the last piece of saffron clay against my body before it trails away over my hands and legs back into the Kala Pani. 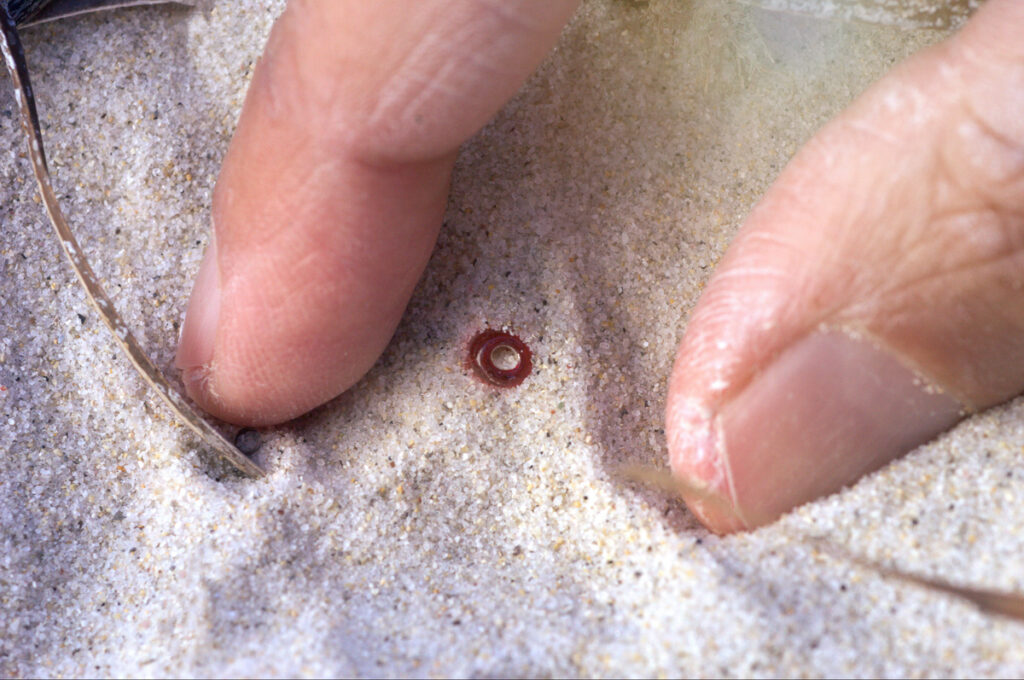 Everyone is still asleep. I got up and stepped out into the sand from the back door. The sky is dim and the silhouette of Maulana is just visible walking towards the mosque for the morning Azan. The water is still and the smell of maresia is overwhelming. At the edge of the water, nests of seaweeds lay on the pale creamy sand. I look for the missangas left behind from last night’s procissão. My fingers get entangled in the mat of seaweeds and I find a red missanga sitting like a precious jewel interwoven with the floats of seaweed blades

It has been almost two hundred years since the beginning of the Indian indentured labour system, which saw over 3.5 million people of Indian descent “moved” or “transported” across Oceans in a form of bondage, where they worked on plantations in European Colonies in countries all over Africa. This “migration” continued into the early twentieth century and whilst much has been written on the logistics of imperialism and the strategies of power that were developed to maintain and subjugate generations of people, there is limited information on the effects of imperialism on the makers of arts—to artists, artisans and craftspeople through the devaluing local craft, dismantling of small industries that existed all over India, as well as existing transnational exchanges between artisans from India to the Middle East and Africa.

Remembering Kala Pani embodies the critical incident that illustrates our histories as artists, as well as its connection to the history of others who, like ourselves, made the journey across the Kala Pani, the Indian Ocean, and lived as migrants in other lands. We aim to bring a greater understanding of how ancestral transmission of crafting practices were transferred by lines of descent, moving away from hegemonic practices of anthropologists to a grammar where children learn by presencing the rituals of craft making.

In this body of work for the Indian Ocean Craft Triennial (IOTA21), we explore, how presencing is experienced as an act of conceptual crafting, deliberately set out to a consciously embodied practice of art-making where memory serves as a resource for resistance. A few years have gone by since we began to create artworks for IOTA21, but the subject matter has been a lifelong project for us.

As a child, I grew up presencing the making of clay vessels, as I sat and played around the women as they harvest the clay around the far side of the rice paddy fields, prepared the clay, and fashioned it into multiple shapes embodying the stories they shared. Greenware vessels like cylinder deckchies (terracotta pots for cooking) were created, their openings covered by round convex plates would lay for days on the veranda, where the sun filtered in softly. I visited them daily, at times sitting next to the pieces presencing the shadows they cast over each other, as the sun performed its daily routine.

When the greenware vessels were touch dry, the women would return in the evening carrying small pots of rice paste and pigments of red/pink, green, yellow, blue and black. Line drawings were made with rice paste making motifs passed down from mothers’ grandmothers and “othermothers”, like rice ears infilled with colour. In the morning, the cylinder deckchies sat in the sun shimmering as if lavishly painted in gold, highlighting the rice ears motifs. 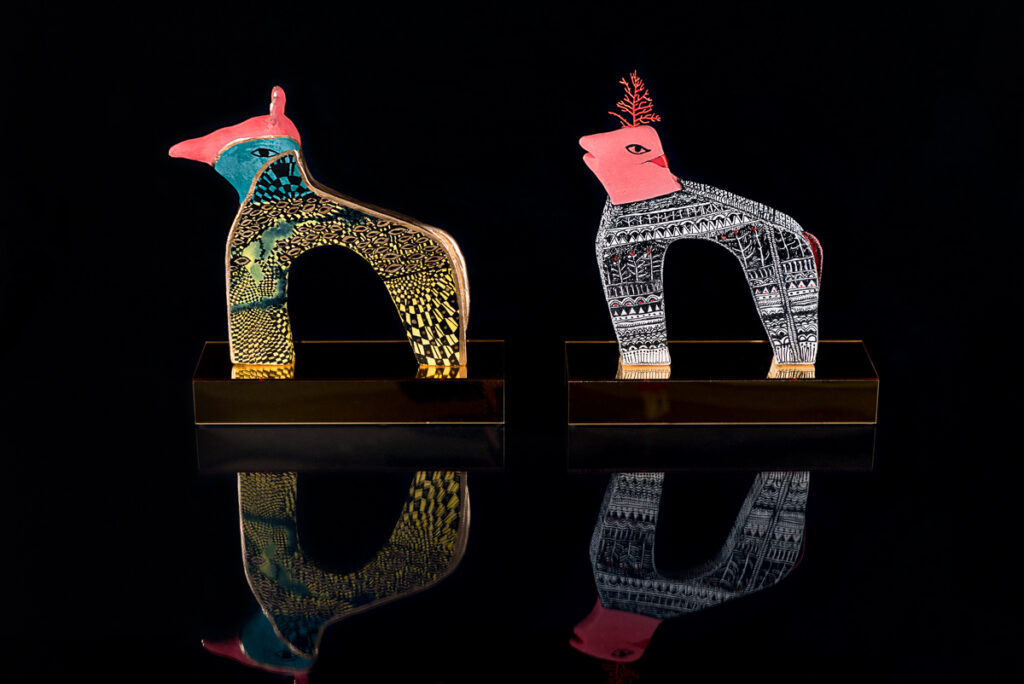 It was also in the evening in the Island of Mozambique that Arif was presencing people in procissão, a line of people adorned with masks in a ceremony of defiance and remembrance walking through narrow streets paved with stones, their shadows drawn on the whitewashed and yellow washed walls like ghosts, flashes of the past, poignantly reminding everyone that the land had a long and mythical history. He watched the figures disappear and followed from a distance, knowing they are going down to the foreshore of the Kala Pani. He watched, capturing a few lines of the recitation, the oration of warrior songs and stories deeply ingrained in the lyrics of plantation, of labour. In this presencing moment, recognising the call, the voice, the tongue of his grandfather and the stories that his grandmother and his mother had kept close to their hearts.

Morning light comes slowly, revealing old, whitewashed and yellow houses absorbed the early morning light, where the patched-up ruins of century-old arches, walls and narrow streets come alive revealing small treasures, witnesses to the procissão of the night before. He (Arif) walks through the sand down to the ocean, the Kala Pani, sifting, filtering through the white sand to uncover the missangas that had dropped from the night before. He picks them up one by one, they stick, clinging to his fingers and under his nails. Like precious jewels, they shine in the sunlight illuminating their intricate patterns…

Presencing is a term that combines the concepts of presence and sensing and seeing. Here, we link the notion of presencing to perceptive knowing that is grounded in the witnessing of crafting practices that are not only about making processes but very much combined with rituals that are symbolic as well as transgressive.

For Remembering Kala Pani exhibition, the act of presencing is imprinted in the method of making and most importantly in the remembering of rituals and stories of our ancestors that were taken across the Kala Pani.

By presencing the past into the present, a field of votive clay sculptures at times shimmering in gold and adorned with missangas and rice ears walk in procissão. 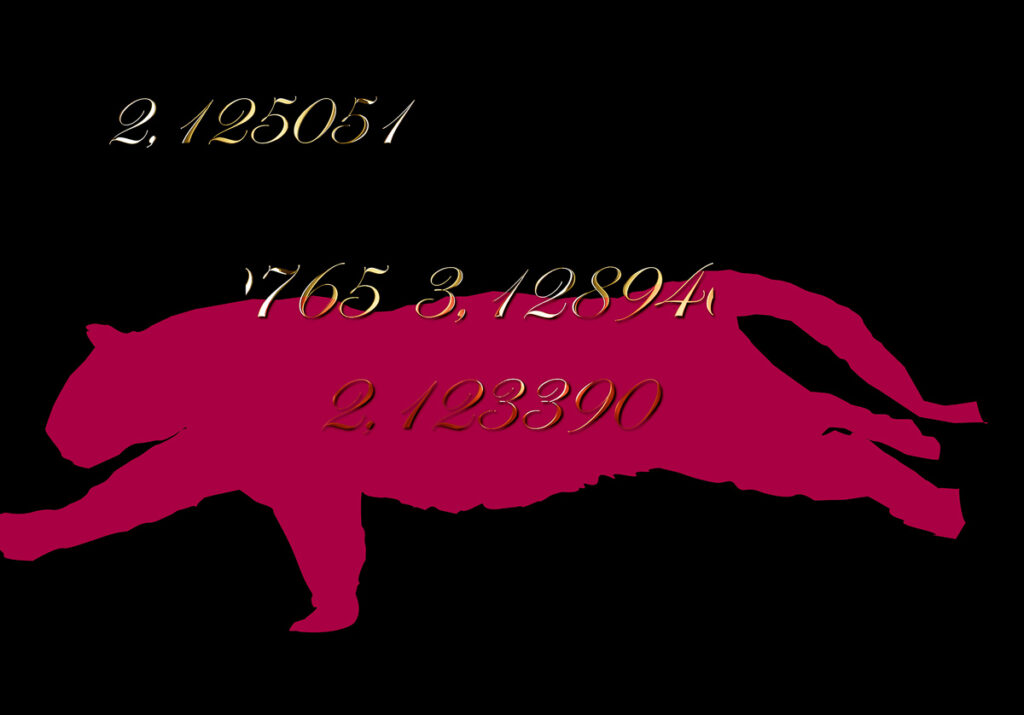 The wall is layered with the changing rhythm of six-figure numbers running with a tiger reminding us of the 3.5 million people who crossed the Kala Pani and the 1886 portraits for Queen Victoria of her “Indian Subjects” are reconstructed to gaze back at the audience through Tiger eyes. 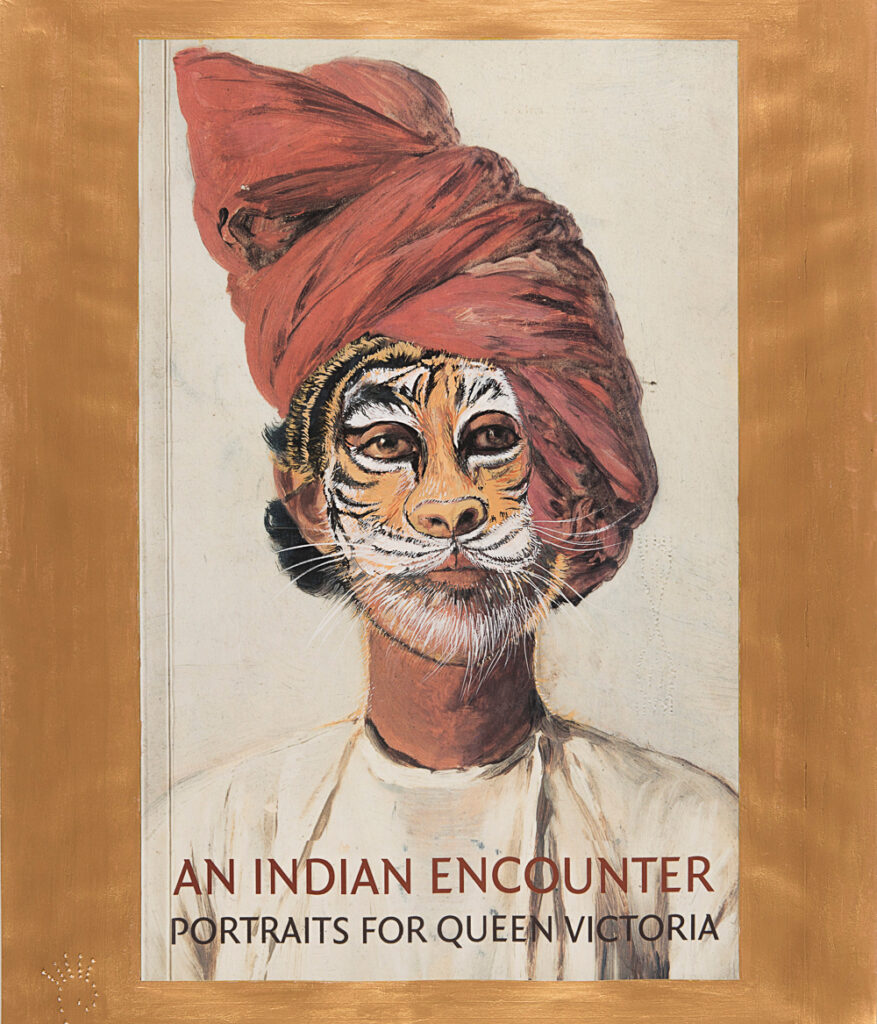 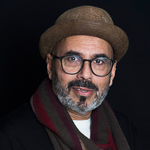 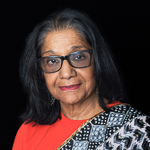 We are the Fernandes-Satar: visual artists, educators, community art workers, spouses and partners, grandparents and migrants several times over. Audrey is Christian, and I am Muslim. We live and work in Waylyup (Fremantle) in Whadjuk Noongar Country. Our art practice is cross-disciplinary involving sculpture, drawing, printmaking, sound and moving image. We have undertaken public and community arts projects, gallery-based exhibitions, art residencies and educational art projects in Australia and overseas.  We are currently working on Remembering Kala Pani for the Indian Ocean Craft Triennial (IOTA21) exhibition at the Fremantle Arts Centre, Western Australia and for Home/Place, a two-month community artist-in-residence project with the City of Kwinana,  and also towards several public art commissions.  Follow @aandasatar
Dr Audrey Fernandes-Satar is a Lecturer for Cultural Studies in the Discipline of Education at Murdoch University Perth Western Australia