Tecuil Alessia: Preserving the heart of the prehispanic kitchen 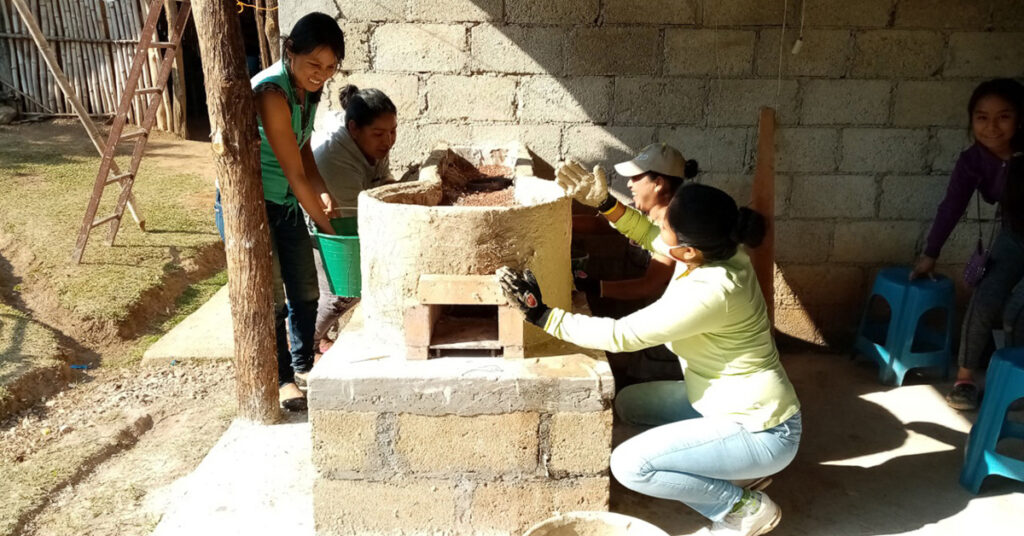 Over the years, while travelling in rural Mexico, I have been captivated by kitchens. They harbour so much tradition. I often found myself amazed by the ability of women to make tortillas (I’ve tried and failed many times). The utensils, the food, smells… while I am there it just seems like time has stopped.

From a distance, as a visitor, I’d like those kitchens to stay separate from the modern world. They should keep preserving their culture, from one generation to the next.

But that view looks only at one side of the story. It overlooks the health, safety, and environmental issues. Homes in many rural areas in Mexico do not have access to hot water, electricity is not so reliable, and gas is too expensive. They have to rely mainly on resources in their surrounding areas, like firewood. Many women and children develop lung problems from inhaling smoke during the many hours they stand by the stove burning wood, in the Tecuil (prehispanic stove). 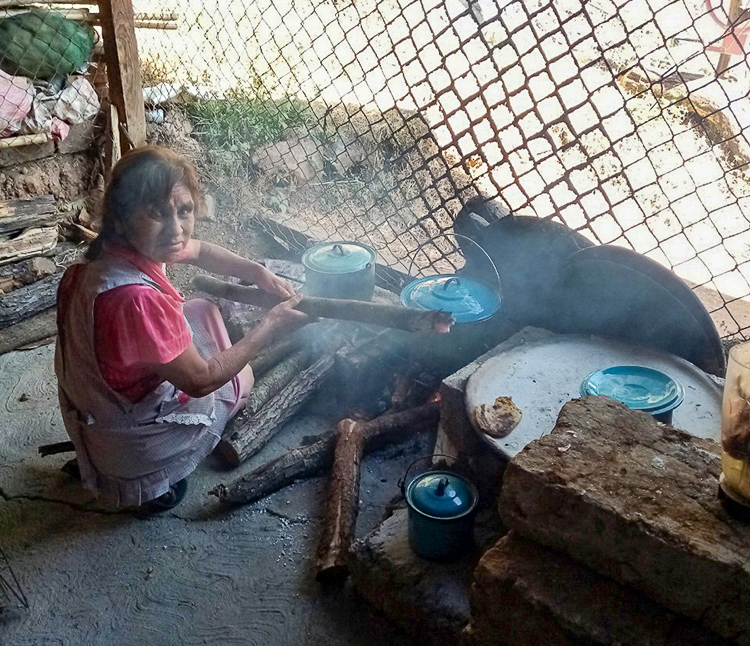 My perspective changed when I recently found out about Tecuil-Alessia, a design by Alessandro Mendoza-Galina. It’s a redesigned stove, inspired by the traditional tecuil. At its heart this design preserves culture without overlooking health and environmental issues. It reduces firewood use by 67% and integrates a water heater, and a fume extractor.

Alessandro is a permaculture expert living in Malinalco, a small town located a couple of hours drive from Mexico City. He was hired by Fundacion Comunitaria Malinalco (FCM), a non-profit organization that provides funding to support social projects helping the community, mainly to teach permaculture techniques, and that’s when the FCM learned about Tecuil-Alessia, and decided to offer the funds to support the building of these new stoves in the homes of qualifying families.

Each family builds its own tecuil under this social program with Alessandro’s guidance. 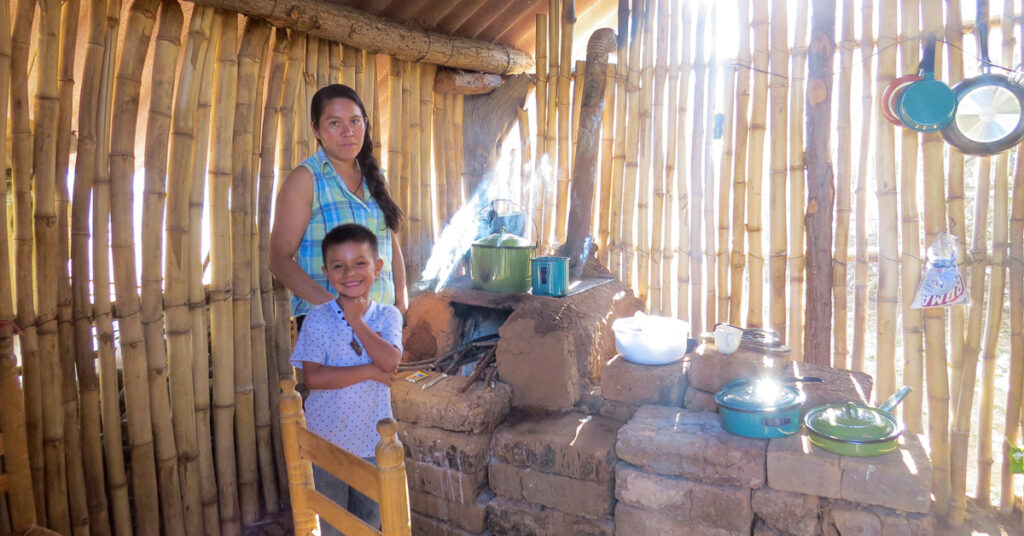 Tecuil (from the náhuatl tlecuil) can be traced to prehispanic times. It’s a stove made with three stones called tenamastes placed on the floor as a base.  The users place stones in this indigenous hearth in triangular or square shapes. Firewood is set inside, and comales (comalli in Nahuatl means flat surface usually made of clay, and mainly used for cooking tortillas), are placed on top.

Alessandro’s drive to develop the stove is directly related to his passion for creating an environmentally responsible design. He has been aware for some time now of the importance of sharing knowledge and tools with marginalized communities, especially when building more sustainable and healthier ways of living and thriving.

But, let’s get back to the kitchen. If one thing is traditional, it is tortilla making and, therefore, the maize.

The Mexican families’ nutrition in rural areas relies fundamentally on their daily corn tortilla intake. A big part of the work done in the fields, and in the kitchen, is in order to produce year-round maize dough supply.

As a true believer in cultural preservation, and inspired by stories such as the woman who supports the entire family by selling handmade tortillas, he came up with the proposal for the new stove, designed thoroughly thinking of the person who will cook every day with it.

Entire families participate from planting and harvesting, to detaching the kernels out of the cob, a task done mainly by women and children as little as three-years old.  It could take several days or weeks depending on the quantity.

Finally, they add maize kernels into boiling water and lime (90% pure calcium hydroxide), left to steep, and washed (at least a couple of times). This process is called nixtamalization.

During prehispanic times, they cooked the grains, adding burnt wood ashes as an alkali, or different kinds of lime, mined from local sources, making it easier to grind the corn. Today we know maize absorbs calcium and potassium during this process giving it its distinctive colour and taste.

After boiling this mixture for hours, the skin peels off, and the nixcome (hydrated corn) is ready to be milled. This requires hours of work, but it’s worthwhile; finally tortillas can be toasted on the comal. 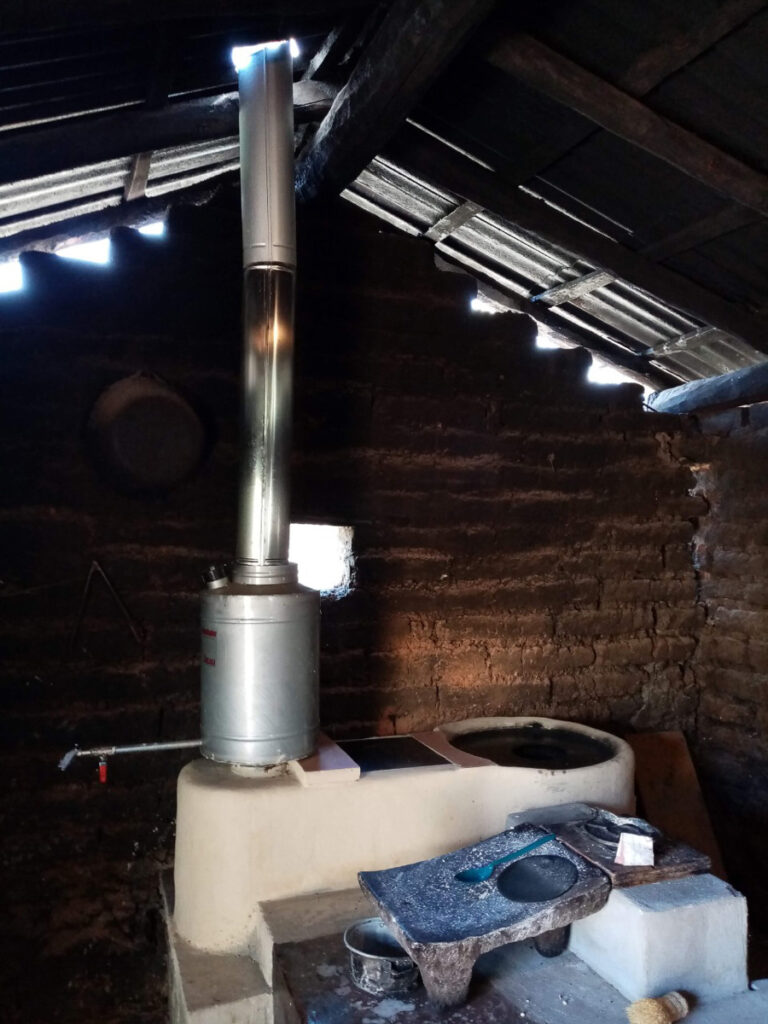 Alessandro analyzed the reality and conditions of the traditional Mexican kitchen. As a true believer in cultural preservation, and inspired by stories such as the woman who supports the entire family by selling handmade tortillas, he came up with the proposal for the new stove, designed thoroughly thinking of the person who will cook every day with it.

The Tecuil-Alessia contains a combustion chamber (inside wall) made of refractory bricks and an outside wall made out of red construction brick. Space between is filled with tezontle (red volcanic stone), allowing the heat to conduct upwards, it doesn’t irradiate heat to the person cooking next to it.

In the lower part of the firewood feed, there is an access that allows oxygen to come in; the first comal gets directly heated with the flame, smoke, and firewood vapour. This combusted smoke then travels to the back of the hearth where the heat gets distributed into two more elements, a second comal, and a water heater.

He based his design on the rocket stove, which uses a small diameter-wood fuel that lets oxygen draw in.  As firewood burns, all volatile compounds get sucked into an insulated tunnel where they combust in these kinds of stoves; therefore, almost no smoke comes out of it; what comes out of the chute is only carbon dioxide.

Finishing the inside construction, the builder covers the outside walls with a metallic mesh, which will hold the clay mixture prepared for the coat and replastering. This mixture consists of clay from the region, sand, lime, firewood ashes, and nejayote (leftover water from the Nixtamalizacion process) to humidify the mix.

Alessandro conducts a workshop for three to four days for families receiving the Tecuil funding.

First, he invites women to see a previously made Tecuil-Alessia stove.  At this stage, there is a lot of community interaction. If they are interested in building one, Alessandro goes to their homes to assess conditions in the kitchen areas.

With guidance and everybody’s work, they build the first Tecuil as a sample. After the first tutorial, each family begins building one at their respective home, always with Alessandro’s support.

Once finished, it’s left to dry for fifteen days. Finally, they ignite it on low heat for a whole day to complete the drying process, and it’s ready to use. Each tecuil owner receives a maintenance tutorial.

A final gathering for sharing observations gets arranged for all households involved, and just like in a traditional tecuil, life experiences, stories, laughter, and food are shared once more.

In countries like Mexico, implementing sustainable projects in rural areas could significantly impact their future. Deforestation is increasing. While this stove will reduce substantially wood consumption, reforestation has also to begin. That is why I was very excited to learn that the next phase of this project involves two nearby communities: San Martin and Guadalupe. Together they will plant endemic tree species (good for firewood) in land owned by members of Guadalupe. In exchange for their help, San Martin members, in about two years, will acquire firewood at lower costs from them.

This project brings hope to Mexican women, they will keep flipping tortillas on the comal, and perhaps one day I might be able to flip one too. 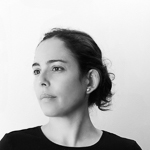 Raquel Bessudo is a Mexican contemporary jeweller, living and working in Mexico City.  Her work was selected for Shmuck 2020, participated in a group exhibition on the occasion of Paris Prcous Bijux 2020, in the near future, she will be part of Cluster jewellery program 2021. Visit www.Raquelbessudo.com and follow @raquelbessudojoyeria.

Quarterly essay ✿ “Drifters” in Jingdezhen: Past meets present in the porcelain ...
Who is the author? Oaxacan wood carvers in global economies of ethnic art
Beyond Limitations Mentorship camp, ClayArch Gimhae Museum
Dear Adelaida
Take a chance on art
Kôgei between Japan and Brazil: The ceramics of Shoko Suzuki
A clay voyage across the Pacific—Omnus Terra
Shaping the divine in the lanes of Kumartuli