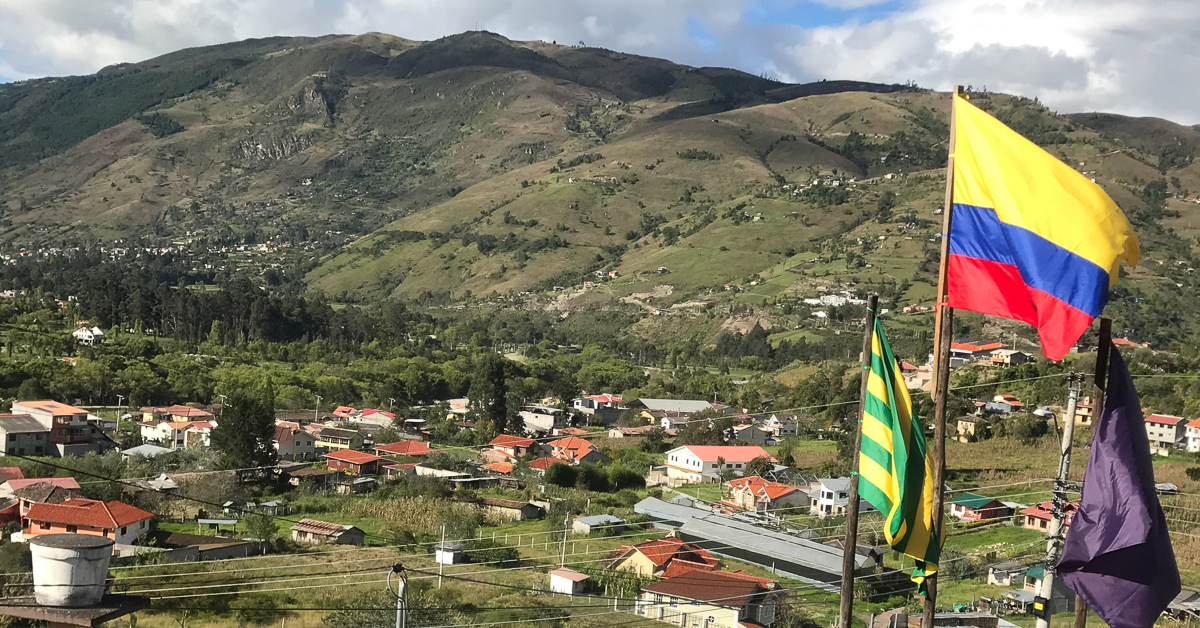 Berenice Cárdenas traces the evolution of Ecuadorian ikat, from its Asian roots to its diversity of expression today.

One of the most representative textile garments of Ecuador is the Macana de Gualaceo or Ikat cloth, shawl, which is worn daily by women in the region. It is well known internationally for the impeccability of its technique and the natural dyes with which it is made. The desire to rescue the Ikat technique and to value the artisan sector that produces these cloths, have positioned the towns of Bullcay and Bulzhun of the Gualaceo canton, in the province of Azuay, as true artisan centers of manufacture of this heritage Ecuadorian icon.

The textile technique, called ikat, is derived from the term Mengikat, which in Malay means “to tie, knot or roll”. It is ancient and is one of the most complex in the world. It consists of dying strands of wool, silk or cotton thread that, prior to weaving, are knotted and tied with another thread to resist the dye and preserve the original color. The colors penetrate each other and the dye slightly colors the edges of the reversed areas of fiber, creating the typical blurred profiles that this type of cloth presents. The success of the design will depend on how the fibers have been dyed and knotted before weaving on the loom.

Regarding their origin, the Gualaceo macanas have much to tell. They are a tangible memory resulting from the colonial and indigenous past that has survived for more than three centuries to be adopted by generations of artisans from these localities. The ikat shawl or macana that comes down to us today, and which we often see the mestizo women of the Azuay province use, has become popular since 1860. However, the use of cloths woven with this technique had spread to the whole continent long before. 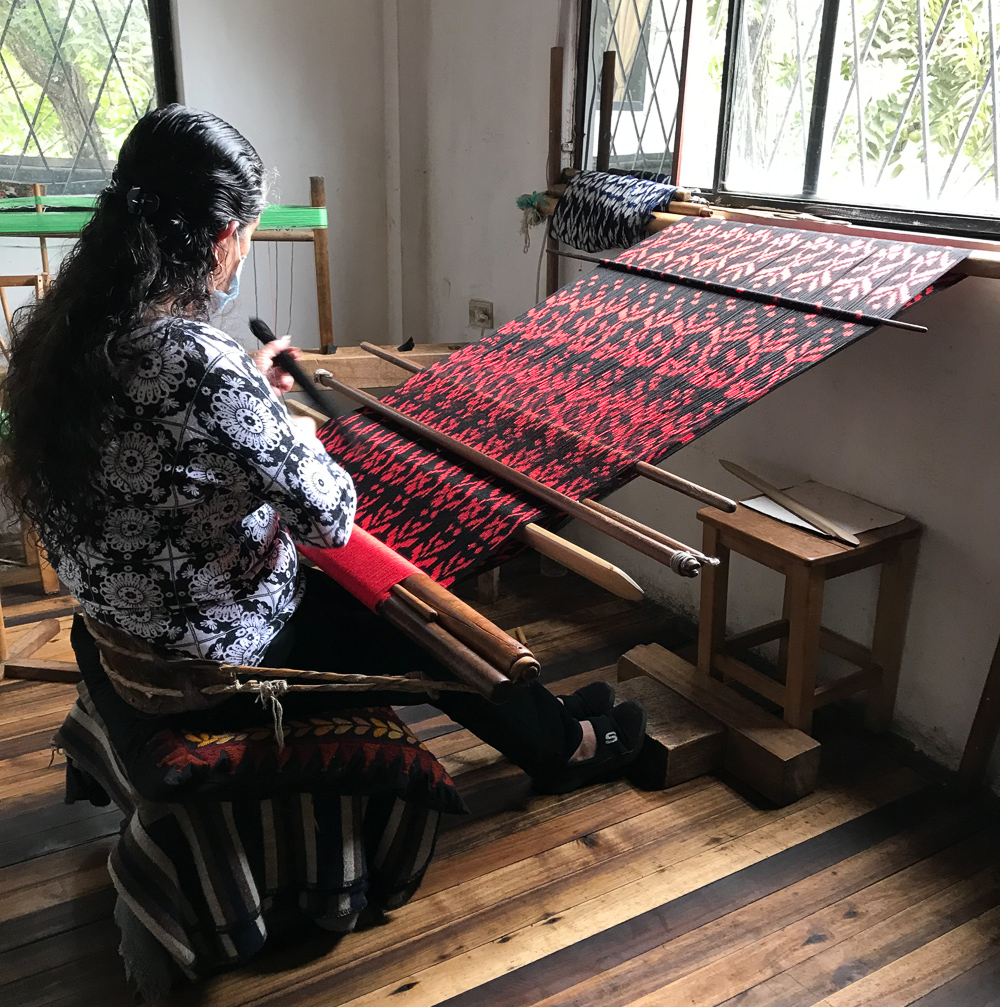 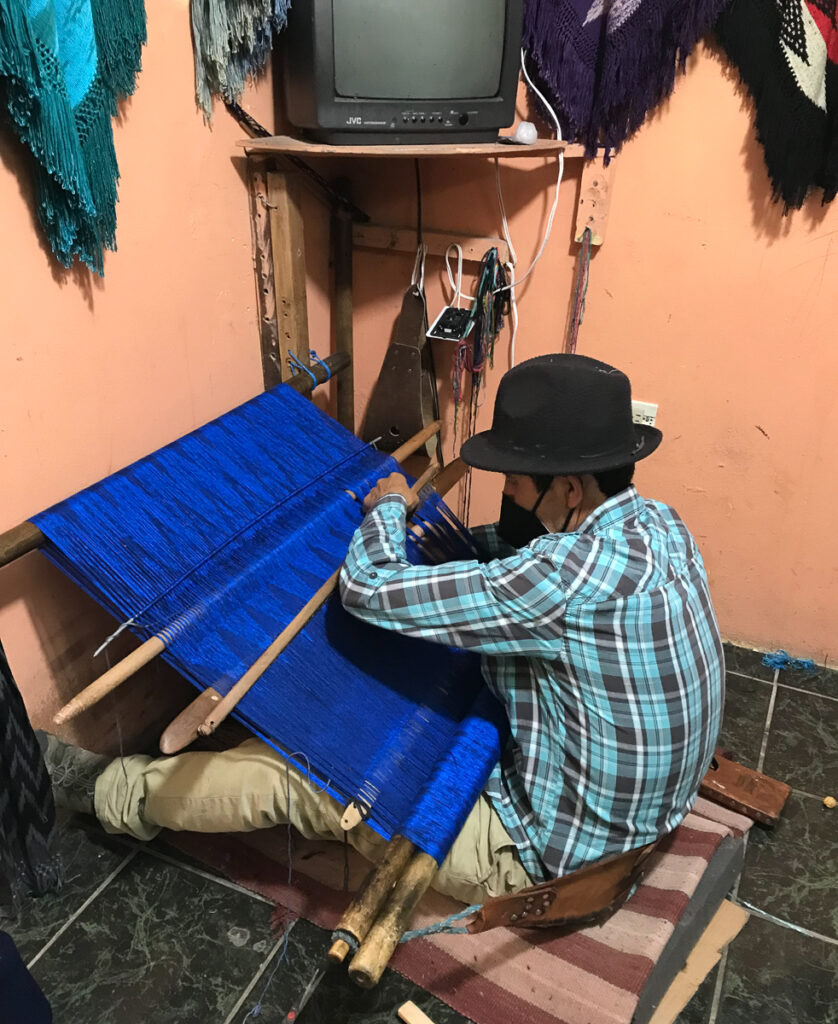 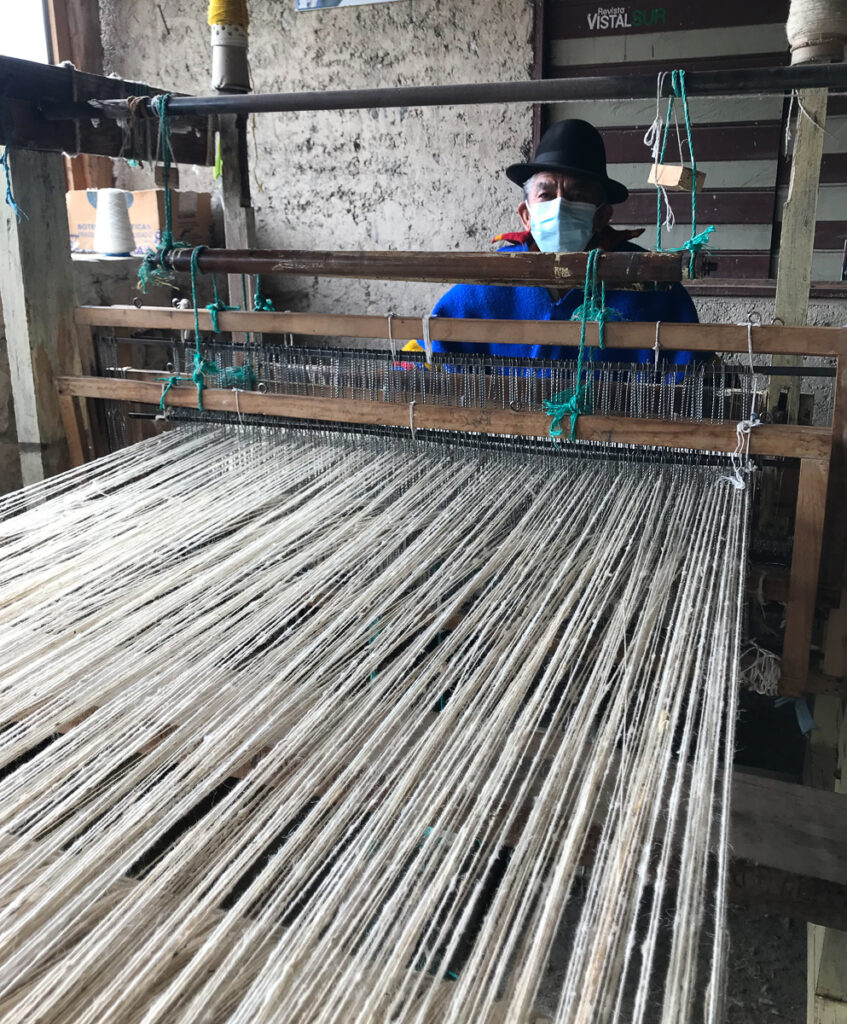 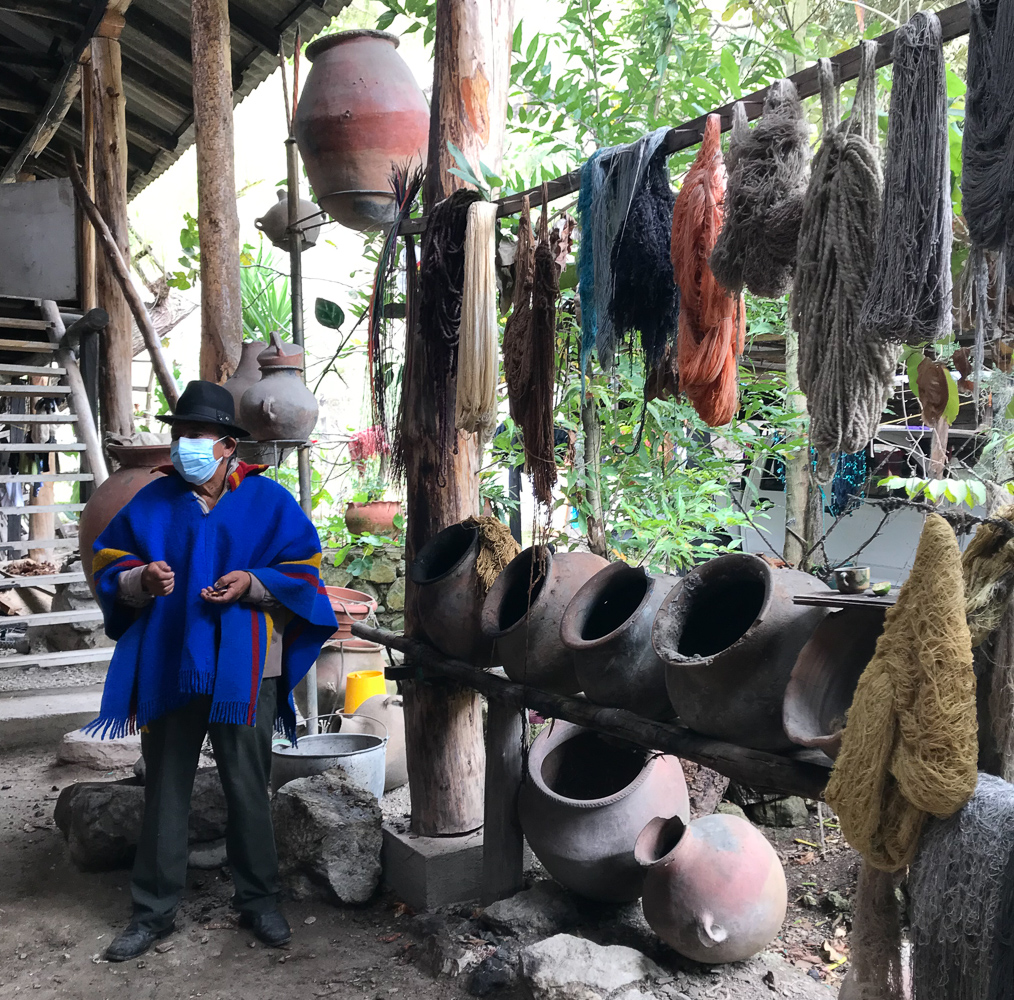 Some historians suggest that the ikat technique was already present in some aboriginal cultures of the pre-Columbian period, thus reinforcing the theories about the links that the original peoples of South America had with South East Asia. At the moment no vestiges or physical samples have been found of aboriginal fabrics that present this technique. There are, however, similarities between designs painted on ceramic pieces of Asian origin with the fabrics of the Gualaceo cloth.

The Ikat technique has its proper origin in Asia, from the trading system known as the Nao of China. This system integrated several Asian, continental and island territories. Spain, Portugal and their colonies, as well as other empires of Europe were all parts of this trading system. It had as its central point the archipelago of the Philippines, whose confluence of several peoples allowed multiple styles, textile techniques and traditions. These techniques were then brought by Spanish merchants to American territory.

During the Colonial Era, the Spanish trade of the Nao with all that merchandise from Asia, via de Manila Galleon, which consisted mainly of spices and textiles, had as one of its main destinations the Port of Acapulco in Mexico. Later in the 17th century, the ports of Callao and Guayaquil became primary destinations as well. These were places from where many textile garments and their techniques were disseminated throughout Colonial South América.

Various historians conclude that the Manila Galleon incorporated blankets with Chinese embroidery, fabrics of Hindu, Malaysian and Indonesian designs. Among them were garments made with the Ikat technique, which possibly was first practiced in Mesoamerica: Mexico and Guatemala.

Soon “New Spain´s” trade agreements with the Southern Pacific coasts were also popularized in the Viceroyalty of Peru.

Ecuador, which at that time corresponded to the territory of the Royal Audience of Quito, was no exception. The popularity of shawls from China and South East Asia, known as Mantón de Manila grew among Spanish ladies, both peninsular and those of the American Creole nobility.

This popularity required that the raw matter materials of threads and silks be imported, to locally produce various textile products with techniques of oriental origin. Local production was made possible via the displacement of native Asian artisans to America, specially to what is now Mexico. They brought with them techniques of weaving and dyeing blankets that were adapted to colonial taste, resulting in a textile product that comes from the integration of pre-Columbian techniques and its respective evolution of styles and needs of the colonial clothing of the era.

Since cotton is a common fiber among Native Americans and Filipinos, it follows that the transfer of technology was not difficult at all. They shared similar methods, such as waist or pedal looms, common both in Asia and the Pre-Hispanic-America. Curiously, this technique was not concentrated in large urban centers, but rather took root in small towns of indigenous and mestizo tradition. Bulzhun and Bullcay and some towns in the province of Latacunga –near Quito– were among them. The reason for its dispersion was due to the development of a textile industry that displaced the Ikat, the complexity of ikat manufacture and also the changes in taste that were increasingly adhering to European canons. 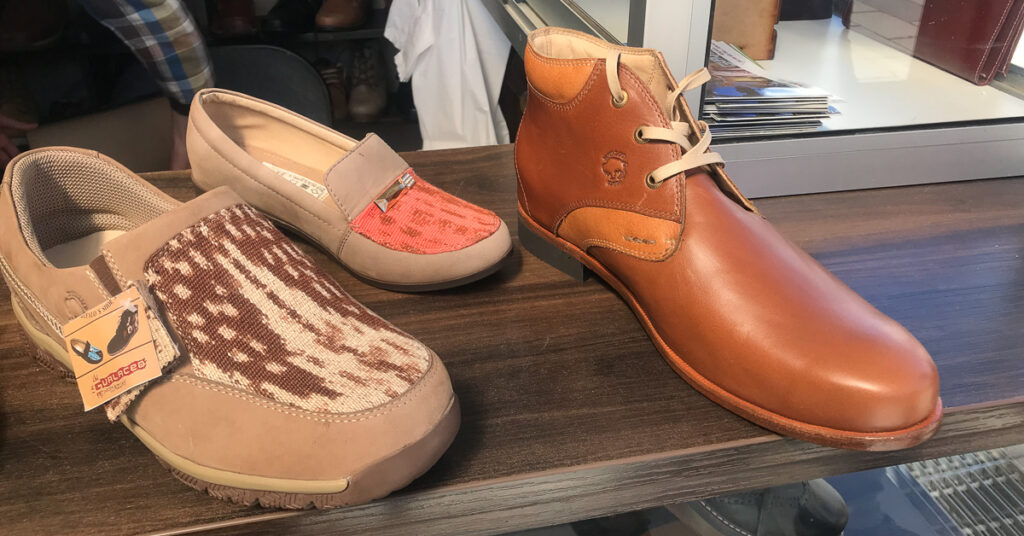 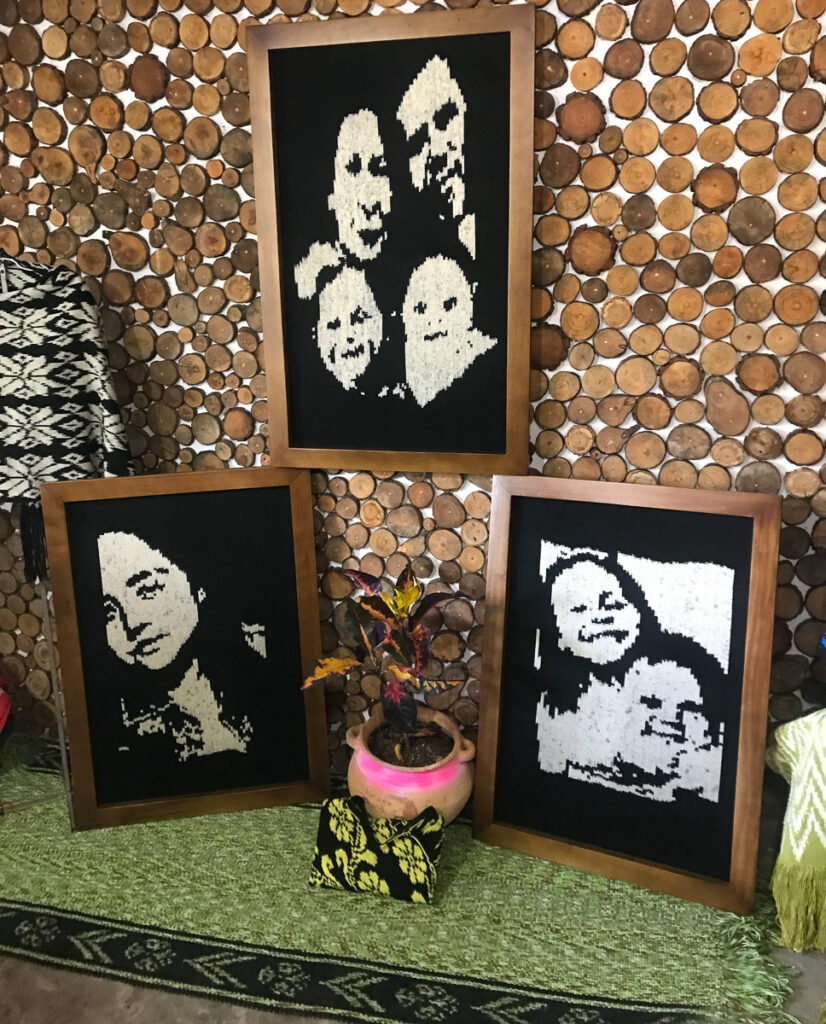 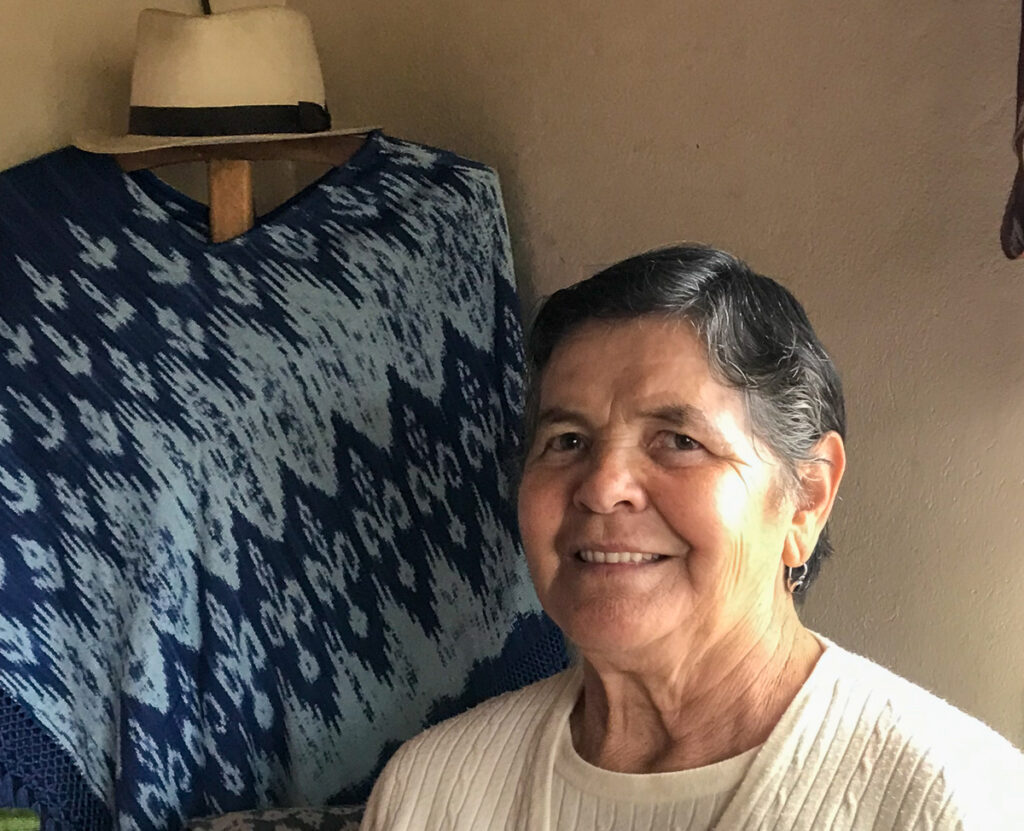 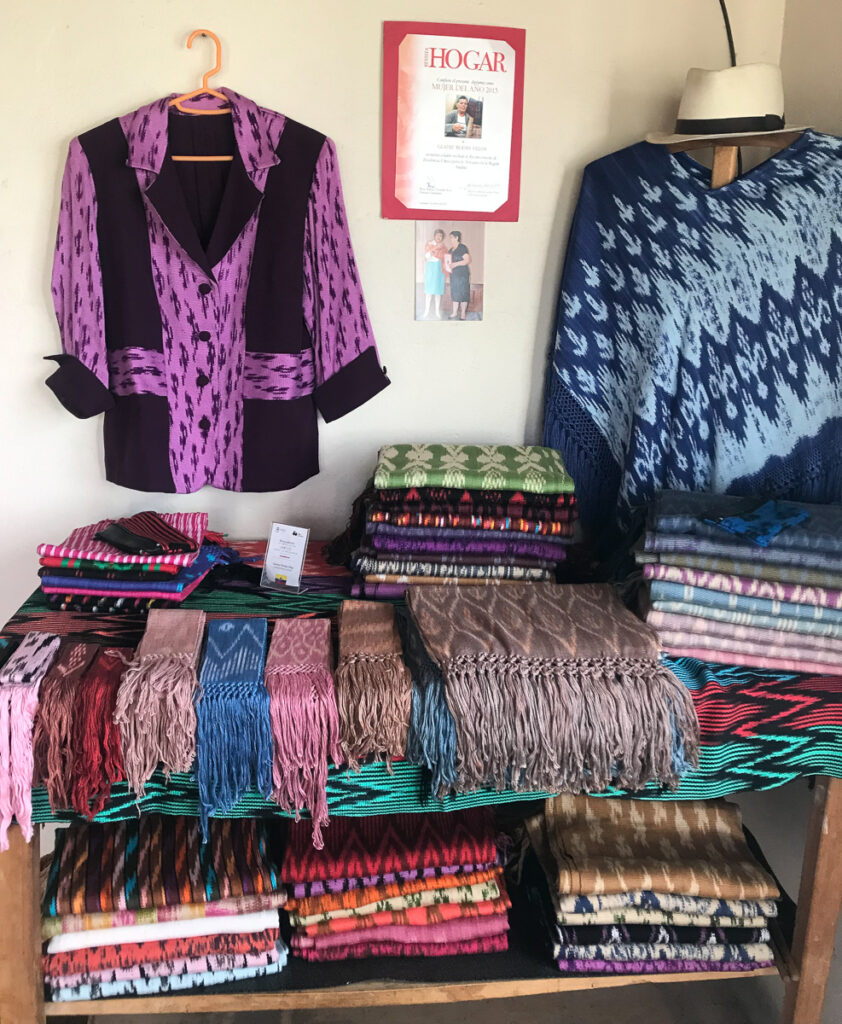 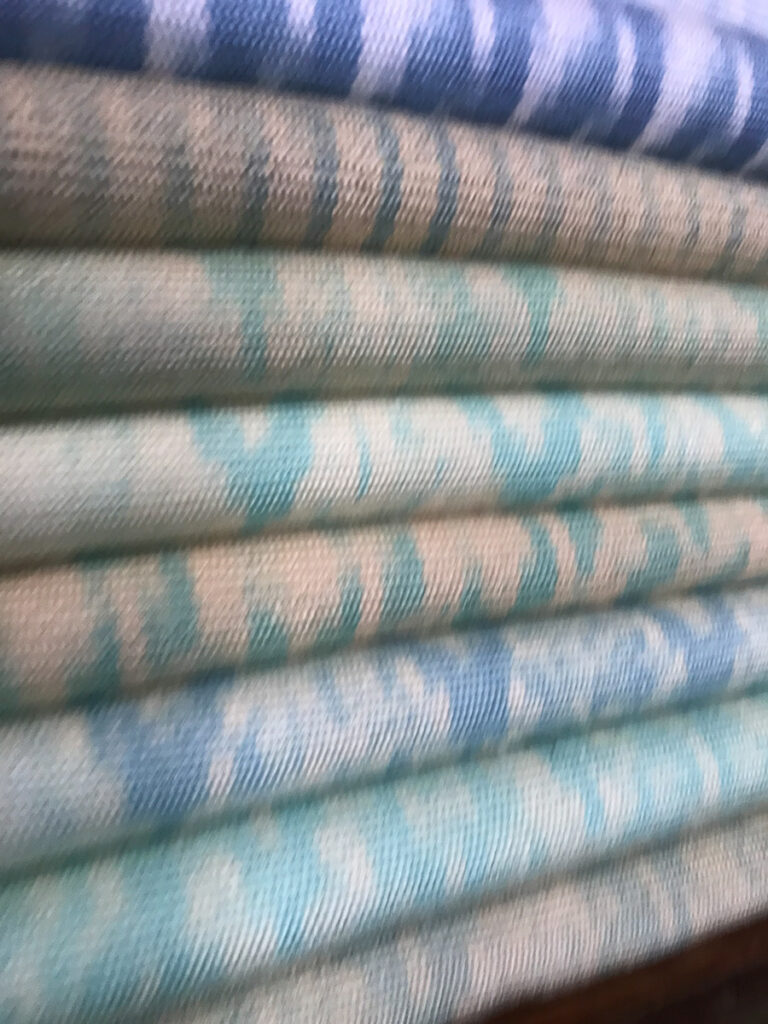 In the Philippines, Guatemala, Peru and Ecuador the Ikat technique is included in the making of various garments of traditional clothing for men and women. However, in Mexico this technique was limited only to what became known as the jasper shawl. In the case of Ecuador, the macanas incorporate the knotting of the ends on their edges to which many researchers attribute European and Muslim roots. These elements make up a style, a product of history and the crossroads of cultures and geographies. Behind the macana there is a whole reflection on how the Ikat technique is confirmed as a fragment of a primitive and pagan humanity that took place in extreme geographical territories, and via the Hispanic colonial period, reappeared fortuitously in the towns of Bullcay and Bullzhún.

This garment exhibits a whole network of symbolisms, mainly linked to its use in society and to life itself. It continues to be part of women´s clothing, both for women from the country and the city. These women wear this garment either for the pleasure of its aesthetic value or its usefulness.

Especially for rural women of Azuay province in Ecuador, the shawl meets everyday needs: carrying food when it is hung on the back, or children on the lap, as well as to go to parties, funerals or Sunday masses. Colorful cloths are still worn for parties. Fuchsia with black is very common, which has always been used for important events: weddings, baptisms, anniversaries and beauty contests such as that of the Chola Cuencana.

Undoubtedly the finest work of the Ikat technique that survives in the South American continent is in the towns of Bullcay and Bullzhún in the Gualaceo canton. Currently, its Asian origin is rarely mentioned. It is still woven in backstrap looms, which are indigenous to the area, and the reserved twist technique and dyeing have made its origin official in the Hispanic Colonial period. In this way, the Ikat blankets have been legitimized as one of the most representative crafts of Ecuador worldwide. They have been made by several generations over centuries, which enhances a feeling of identity and continuity.

The macana is traditional from Ecuador because it has consolidated a unique historical process of transmission of knowledge and techniques. To establish a tradition, it is not necessary to look only in primitive peoples or outside the West. The tradition of the macana is just that: the aesthetics of change and the novelty that it acquired during the colonial period to adapt over time to different modes of production, both artisanal and industrial. The continuity of this tradition does not detract from the use of foreign elements or innovations, since that is what the preservation of artisan work is all about. Without innovation and adaptation of its uses and aesthetics to contemporary times and markets that demand it, it would be doomed to disappear. 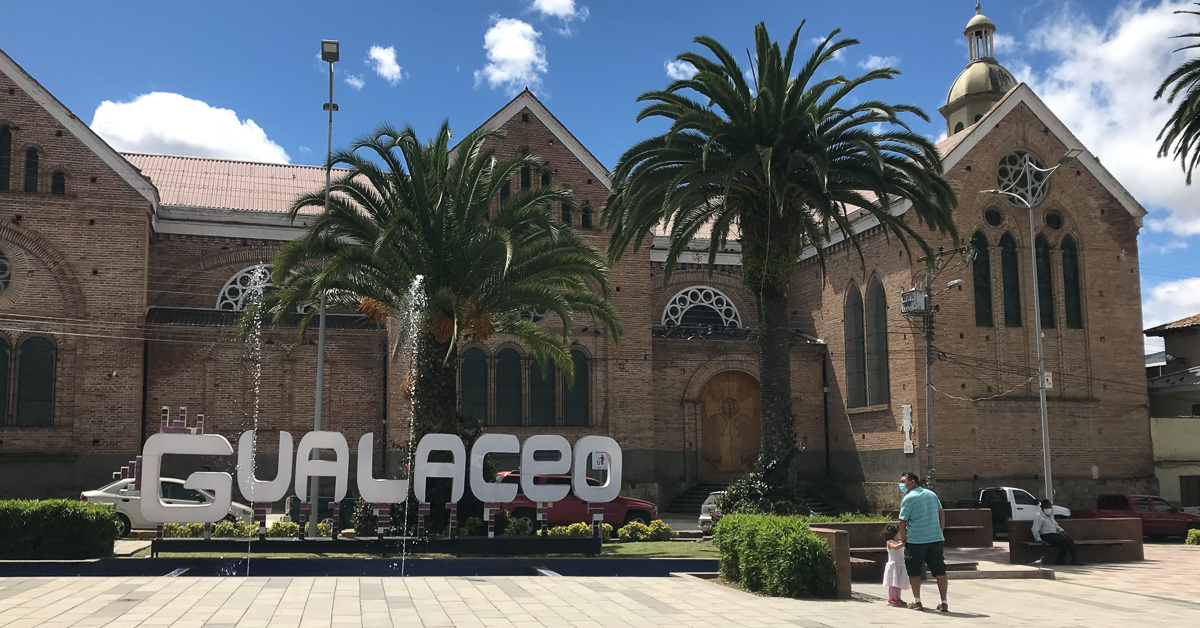 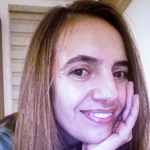 Berenice Cárdenas lives in Cuenca, Ecuador. She has a B.A, Salisbury University, MD. USA  and M.A. Art History, University of Chile. She is an independent Art Historian, researcher, lecturer, teacher, translator and writer with interests in Latin American Colonial Art, Baroque Iconography, Female Iconography in the Renaissance period and handicrafts in the Latinamerican Colonial Period. Currently collaborating for the WCC Latinamerica region as Presidency´s assistant. Collaborator/ Editor for the Latinamerican Handicrafts Encyclopedia.

The linking object: A textile mourning ritual
A new festival for Madagascar, the home of wild silk
Eyes for Chile 👁️👁️ Ojos Para Chile
Alchemy in Japanese traditional craft: Forging and polishing the spiritual world
To steal a golden earring: In search of the chola in the mountains of Himachal P...
Charazani Project: Inca weaving revived
Yilaalu - objects for carrying stories
My grandmother’s hands: Nina Oberg Alaifea and Stephanie Oberg