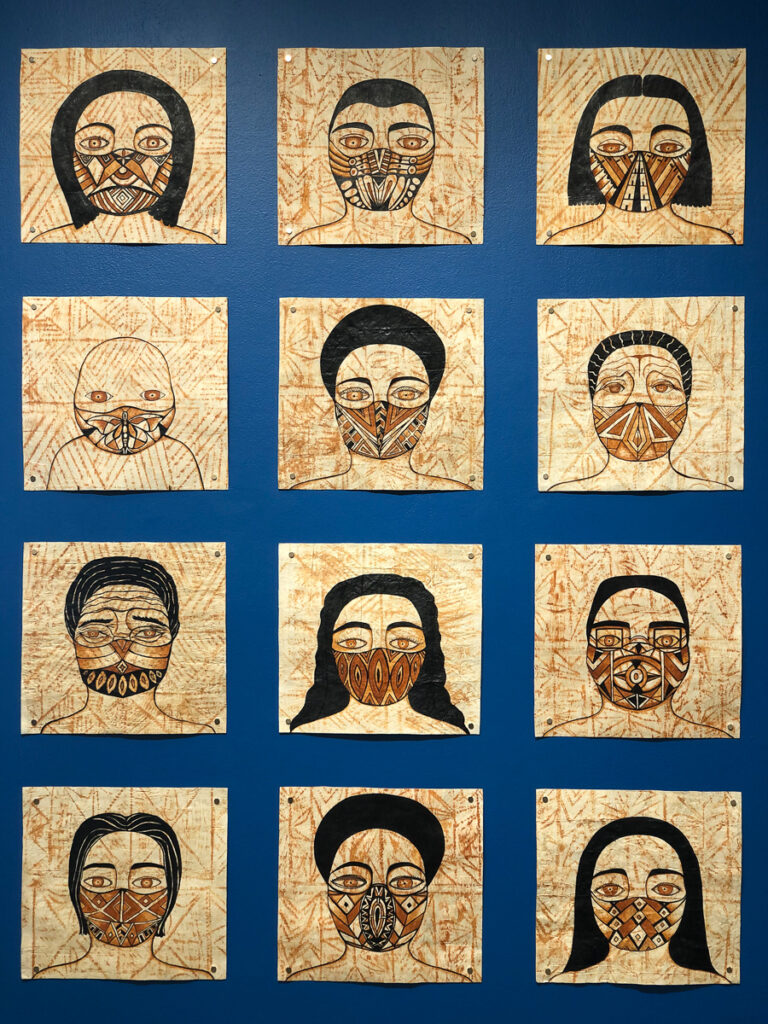 Covid-19 has shown us all that the Universe is a wild place. Even in the concrete safety of the city, we are still in the wild. An earthquake, a cyclone, a disease can attack us and overcome our defences, no matter how prepared we think we are. We can try to prepare, we can be ready for action but the constantly flowing and changing environment of the Universe can still sweep away the predictability and safety of our ordinary lives and upend our plans and force us to put our dreams on hold.

The latest exhibition by mother and daughter collaborators Sulieti Fieme’a Burrows and Tui Emma Gillies is called Voyagers – The Niu World. It refers to the changes we are all undergoing as a species and the new realities we are being forced to deal with because of the Covid-19 pandemic. It could also refer to Sulieti and Tui’s practice as tapa artists, which is also affected by and always responding to the world around it.

When Sulieti was growing up in the village of Falevai in the Vava’u island group in Tonga, her family realised that they could make money from their traditional art by selling pieces as souvenirs to the growing number of tourists. Usually they would make tapa cloth by beating the bark of the mulberry tree and covering it with symbols relating to the Tongan royal family. But increasingly they began to incorporate imagery the tourists liked such as fish and families of turtles. The same process occurred with their weaving of mats and baskets and with the making of floral necklaces known as kahoa heilala.

When Sulieti moved to New Zealand in the 1970s, she brought with her the best of the heritage traditions and the developing trends and slowly mastered her craft. She sold her pieces at the famous Otara Markets in South Auckland for years and before long, her daughter Tui, was also painting on the tapa cloth and on Saturday mornings she would be sitting next to Sulieti and her pieces would be being sold alongside her mother’s.

Universe is bigger and more powerful than we can imagine and it can toss our tiny waka like the giant waves of an angry sea.

Sulieti’s work was based on traditional ideas and designs, but Tui incorporated the stuff she picked up from her mum and mixed it up with political issues she felt were relevant and whatever burst out of her imagination.

It was only a matter of time before the quality of their fine and intricate work started to be recognised by the wider arts community and found its way into the galleries and museums of first Auckland and then the rest of New Zealand and the world.

But while Sulieti and Tui were keeping the tapa painting traditions of Falevai alive, the practice had stopped there. No mulberry trees grew in the village any more. So in 2016, mother and daughter returned to the homeland and gathered all the women in the village to help make kupesi stencils and decorate two ngatu, or large tapa cloth pieces. The project was a huge success and, afterwards, mulberry trees were again planted in Falevai and the tapa painting tradition has been revived there. The project also formed the basis of an exhibition in Auckland called Falevai Flava and a short documentary of the same name and the two ngatu were purchased by Auckland Museum.

Tui’s work has continued to explore the changing role of women in society from the viewpoint of a Tongan European artist and mother living in the working class suburb of Manurewa in South Auckland.

Tui has just moved back there with her family, living with Sulieti, after three years in the Far North township of Kawakawa. The place up north is a beautiful getaway from the city with lots of space in a studio downstairs for daughter and mother to work on their art. A group of film students stayed in the town for a week and made a short documentary about Tui and Sulieti’s practice called In The Water House (The Water House is the English translation of Falevai). 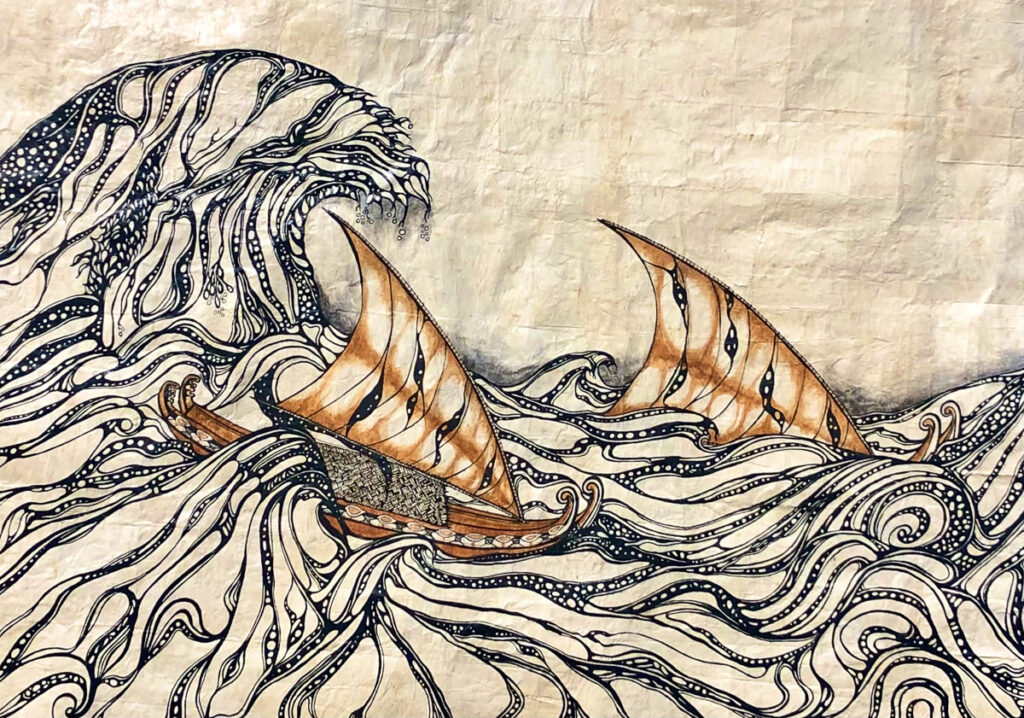 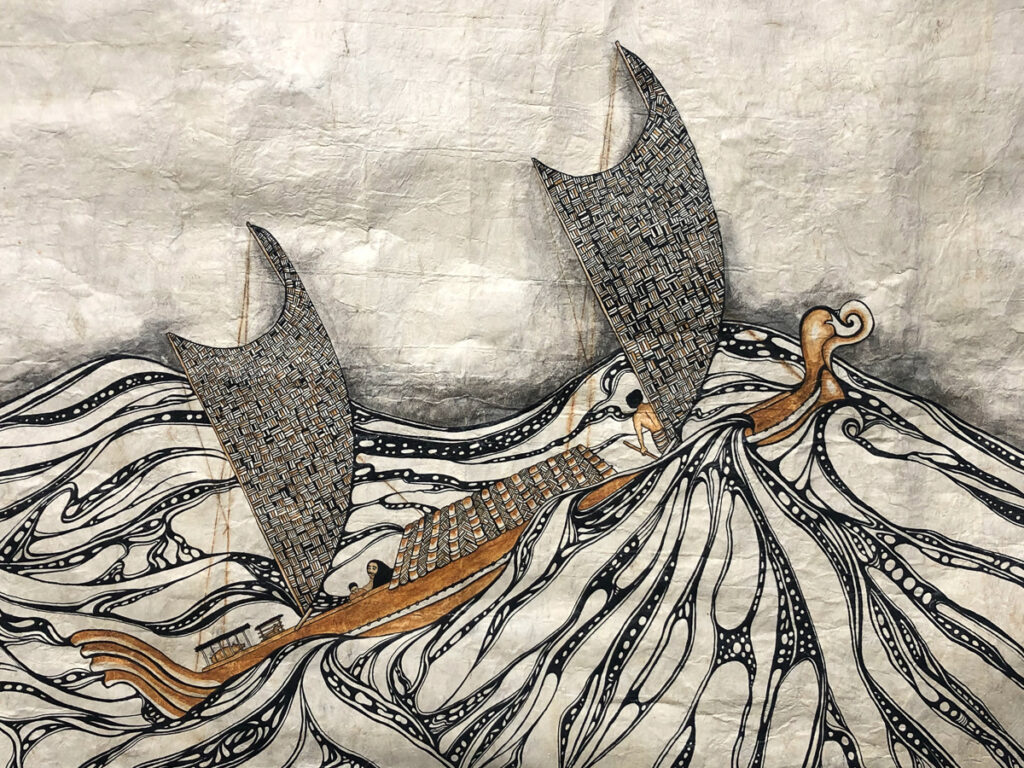 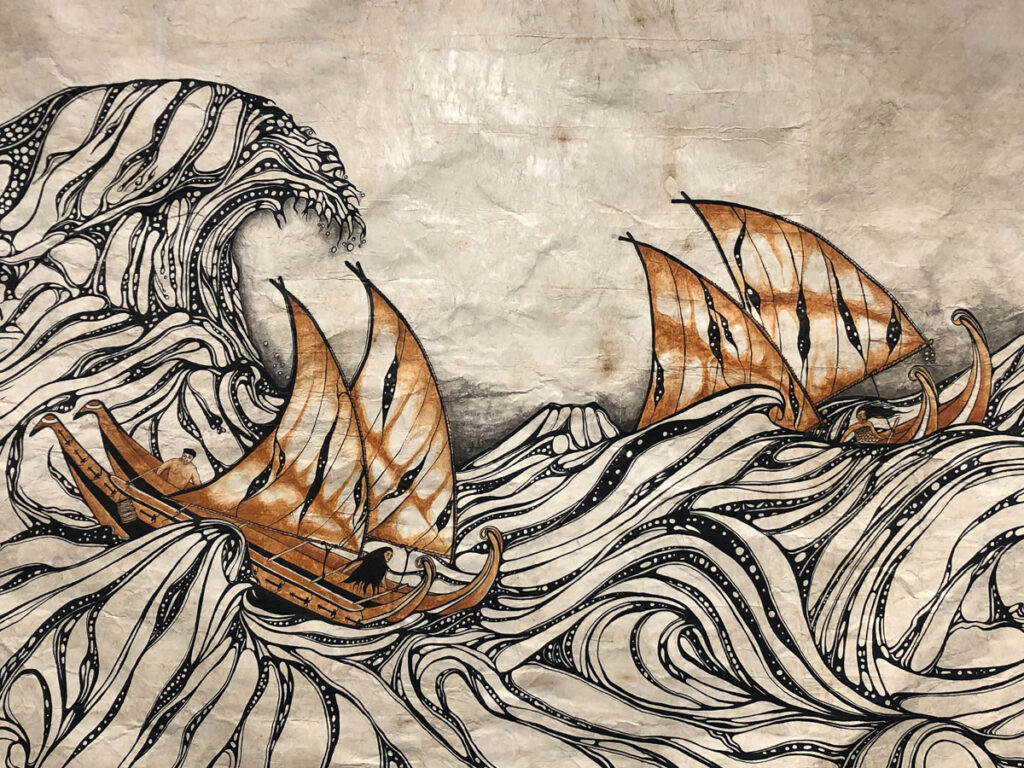 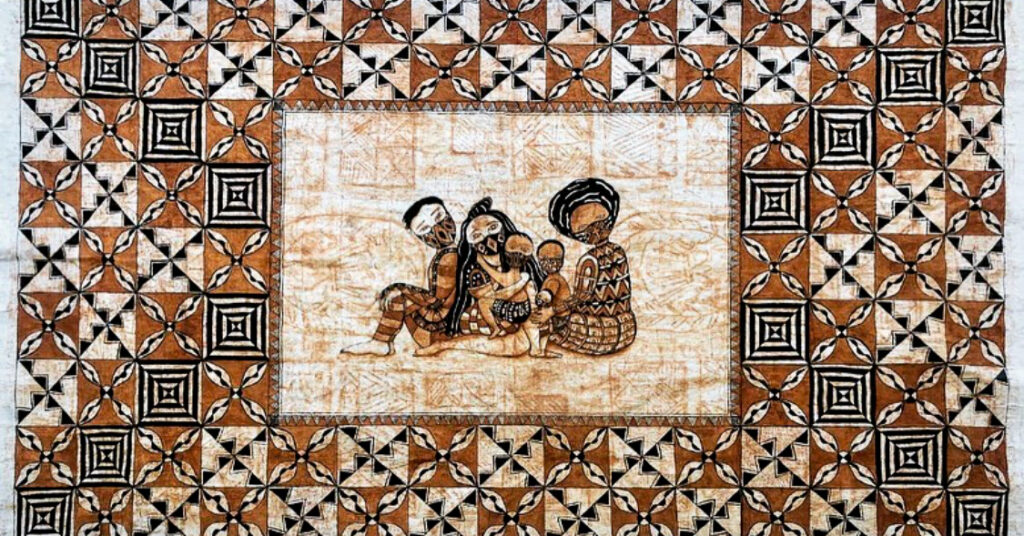 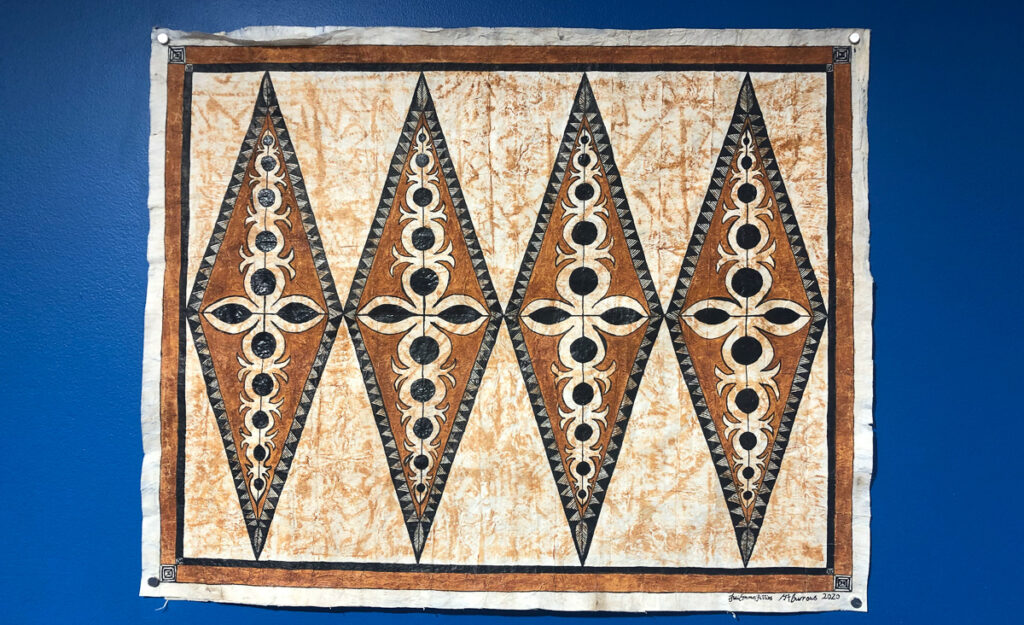 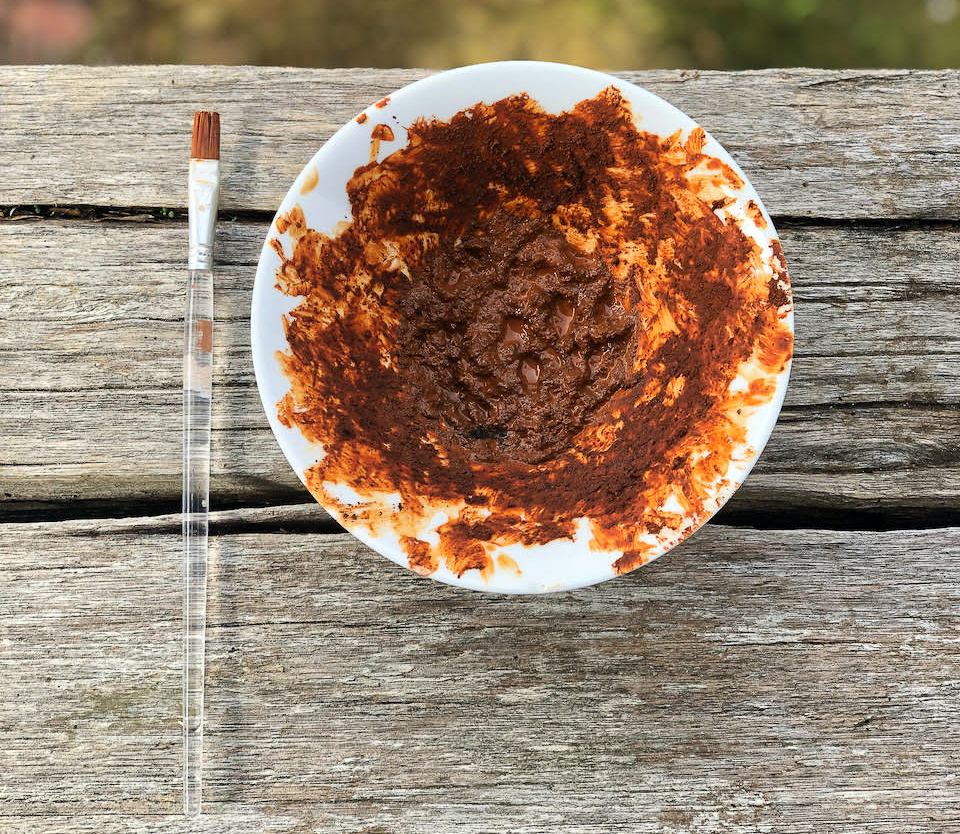 It was in Kawakawa that the work was done for the Voyagers exhibition, held at Tautai Pacific Arts Trust. During the COVID lockdown Tui had started painting people and other creatures wearing masks and dealing with the claustrophobia of their bubbles. This overflowed into the work for Voyagers – The Niu World. Tui wanted to both meld and offset in an exhibition the humans-against-the-elements essence of Hokusai’s famous Japanese print The Great Wave with the hurry-up-and-wait helplessness experienced by everyone going through the lockdown.

“We have noticed that many people from Oceania have a special affinity to that Japanese print. We think it speaks to the great voyages our ancestors took to arrive at the places we call our homelands and the voyages we are embarking on right now in our tiny waka sailing across the mighty Universe.”

Tui and Sulieti decided to work together on the project. The traditional and the modern had to work together, the two generations had to work together, as did all the ancestors before them and the generations to come. Pele, Tui’s 13-year-old son, practised his piano incessantly while they worked. His music influenced the painting. And he too was brought into the project, performing at the opening and to give a public performance. His baby grand piano was transported from Kawakawa to Auckland and sits in the gallery. Another son, Cassius, and daughter Aroha, were drafted in as traditional dancers. Now there were three generations in person involved and countless generations in spirit. 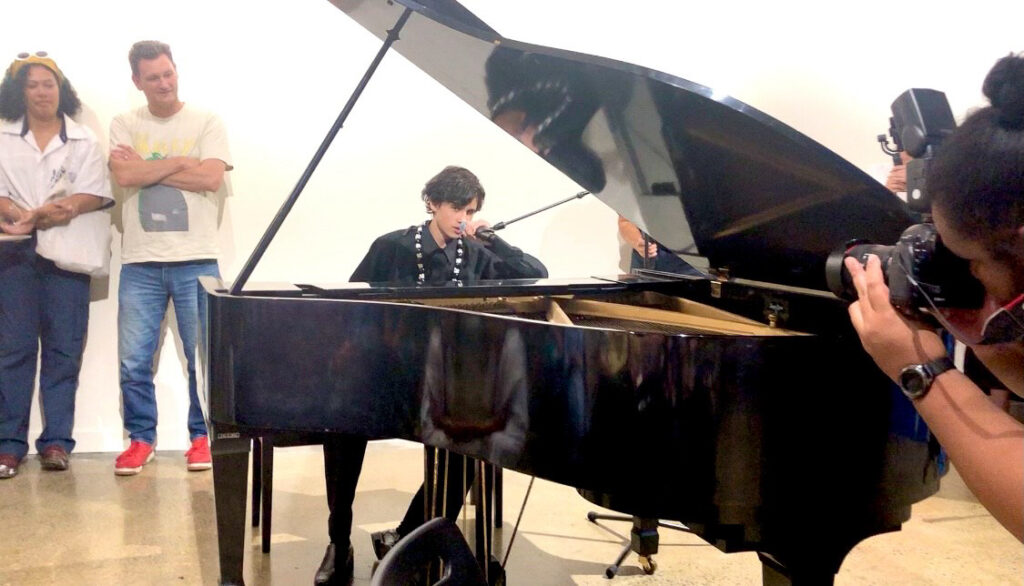 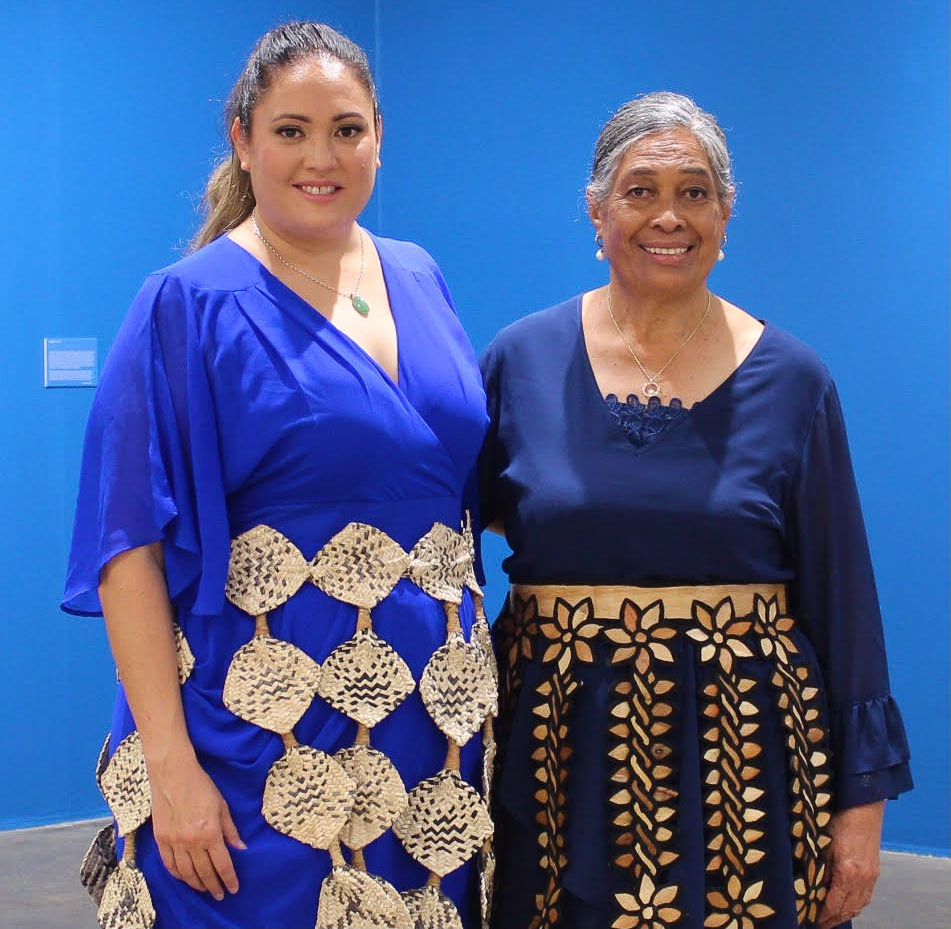 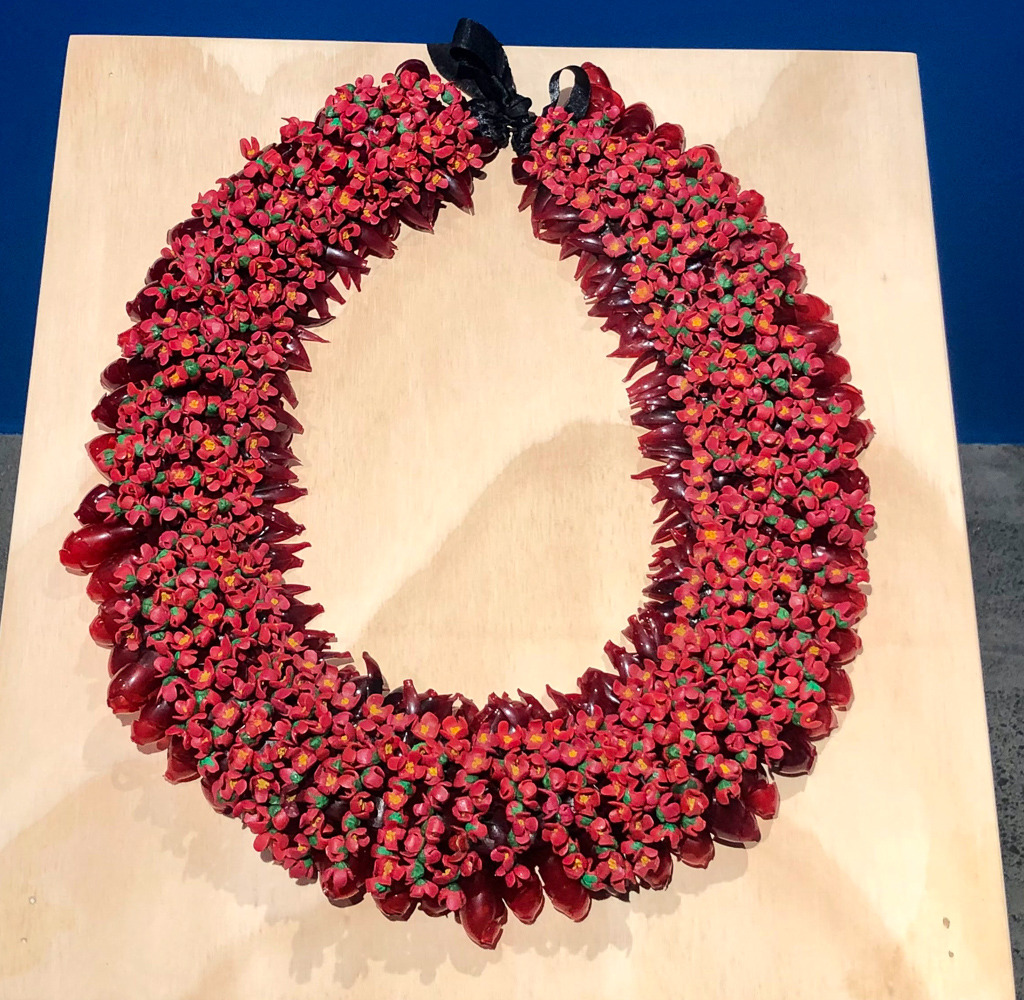 The first thing people see when they walk into the gallery space is twelve giant faces in masks. But these aren’t ordinary masks. A baby has a moth or a butterfly across his mouth. One woman looks like an Escher-like tunnel leads into her subconscious.

“The faces we have painted are those of people in the middle of their journey through the pandemic that swept the world in 2020 and 2021. They were started when Aotearoa was in full lockdown and finished while we were enjoying a reprieve and the rest of the world was being over-run as Covid-19 mutated into ever more contagious new variants.

“Some are old, some are young and some are in the prime of their life. All are getting to grips with the idea of living behind a face mask and of being at war with an invisible yet formidable opponent who can’t be given an inch.

“The background kupesi etchings are created by Sulieti, my mother, and this seems appropriate as the traditions are always in the background, influencing and informing and suggesting ideas and ways forward for that which sits in the foreground.

“The fictional characters in the foreground are created by me, the daughter, and this also seems appropriate that I should be creating something that springboards off the work already created by my mother. These fictional portraits are The Faces of the Pandemic.”

Voyagers – The Niu World is here to remind us: We are adrift on the Universe cruising in our tiny waka but we must not get complacent because we are tiny and the Universe is bigger and more powerful than we can imagine and it can toss our tiny waka like the giant waves of an angry sea. 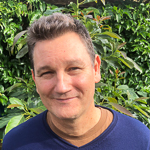 Angus Gillies is a senior producer on the nightly TV news programme Newshub Live @ 6 in New Zealand. He is also an author, having written sports and music biographies, novels and Ngati Dread, a three volume non-fiction series of books on Ruatoria’s Rastafarian sect, which has been optioned by Warner Bros to be made into a mini-series.

Tui Emma Gillies & Sulieti Fieme’a Burrows are New Zealand based Tongan artists specialising in tapa art living in Auckland. Their work mixes can be challenging, confronting and controversial, but always with respect to the roots of the medium and the ancestors who practised it before them. They have received grants from Creative New Zealand towards collaborative art projects and were the recipients of the Creative New Zealand Heritage Art Award in 2018. They have exhibited and presented their work across the globe and sold works to private buyers, including The Royal Academy of Art in London (during Oceania) The National Gallery of Victoria Melbourne, The Festival of Arts in England, The University of Hawaii Hilo and Auckland War Memorial Museum. Sulieti was made an MNZM in the 2020 New Zealand New Year’s honours. Visit tuiemmagillies.wordpress.com