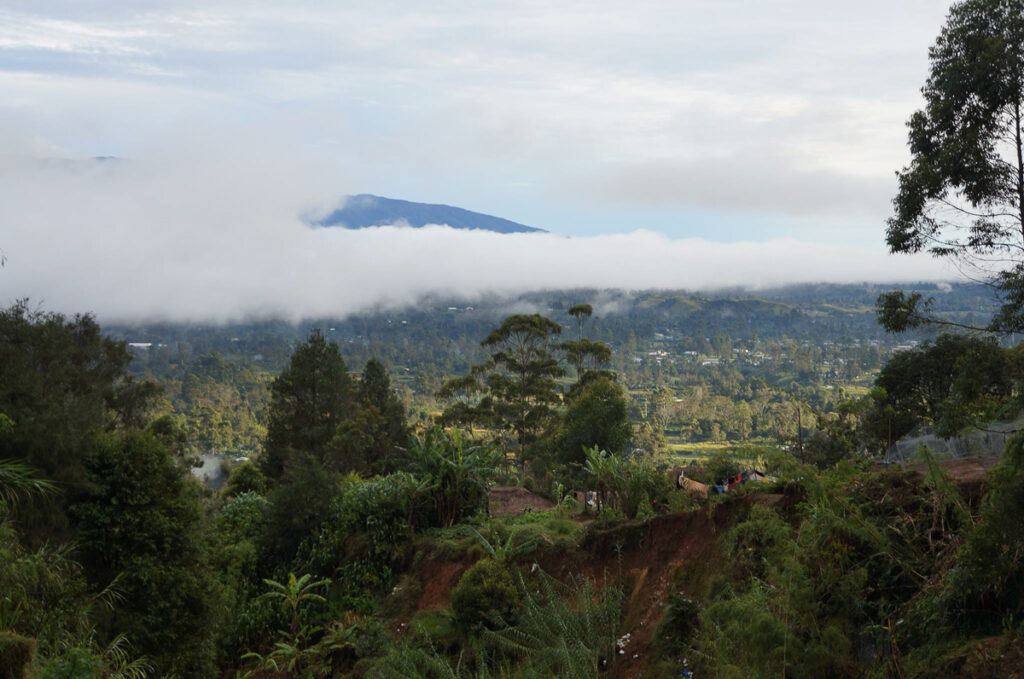 Along the Kunguma – Mt Hagen road

Rosemarie Rusch returned to the PNG of her childhood to study the traditional architecture of woven walls, but she also learnt to appreciate the social life and friendships of village life.

In 1965, when I was nine years old, my father moved his expanding family from Germany to Papua New Guinea (PNG). Together my siblings and I roamed the “bush”, sleeping in villages with our friends, exposed to a myriad of new and tantalising visual sensations.

Villages were hives of activity. Everyone, including children, was involved in the social process of making. Walls, mats and little toys were woven from bush materials and beautifully coloured using natural dyes. Canoes and buildings were no exception, often intricately carved and decorated with stylised birds, animals and people.

Papua New Guinea, it seemed to me then, possessed a remarkable traditional architecture of thatched and woven structures, constructed from materials readily available within the tribal boundaries. Since then, I gradually realised just how unique my childhood experiences were, for PNG gets under your skin. My continuing bond with PNG friends and family led to my doctoral research some fifty years later, attempting to understand PNG traditional architecture in the contemporary context. There is an intrinsic link between the legacy of traditional architecture and social practice in PNG, which embodies memories, cultural beliefs and behaviours deeply embedded in the cultural and physical landscape.

However, ethnographic fieldwork brings a sense of reciprocal obligation to be sensitive to the thoughts, behaviours and expressions of the people we study, and to maintain future connections after leaving the field. One of the ethical dilemmas of fieldwork is the perception of custodianship of material cultural heritage, a growing awareness of the commodification of culture, the politics of reciprocity, and protection from exploitation. I acknowledge that traditional architecture may fall into this category, yet my hosts spoke openly about wanting their voices heard, their desire to engage with research and to have the resulting outcomes disseminated more widely. It is in this context that I share a small glimpse of my visit to Kunguma Village, Kuta Ridge, in the Western Highlands Province of PNG, at an altitude of about 1,890 metres. 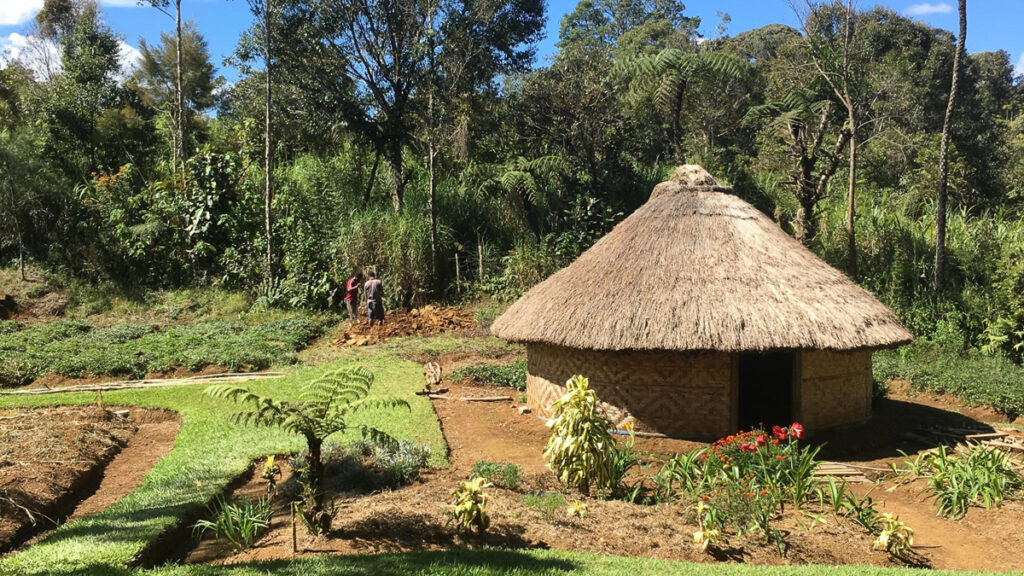 Kunguma is home to about 300 people of the Penambi Wia clan and the Temboka language group, one of about 800 distinct language groups in PNG. Beyond the mountain ridges and deep valleys, waves of distant ridges beckon, sometimes clearly defined against the azure sky and sometimes dim through mist and cloud, as the afternoon rain showers descend, bringing with them the cold evening winds. Despite the evening chill, chatting and sleeping in a traditional home during my village stay in 2016 proved cosy and comfortable; a warmth and calm was generated by the sight and smell of a log fire.

The village includes houses with woven walls and thatched roofs, verdant gardens cloaking every available space in a seemingly haphazard fashion, and the easy companionship of extended family living.

Much of the traditional built environment here is ephemeral, in a material sense, with traditional housing capturing remnants of past practices: weaving, binding, knotting. At Kunguma, these values are still steeped in the past, while being drawn, irrevocably, into the present.

If, as Semper proposed, the primary task of architecture is the determination, delineation and enclosure of space, knots are the symbols of the complications and contradictions between the visible construction processes and the invisible social values of PNG village life. There is a symbolic tension in knots: they can represent the ties of kinship and social cohesion. 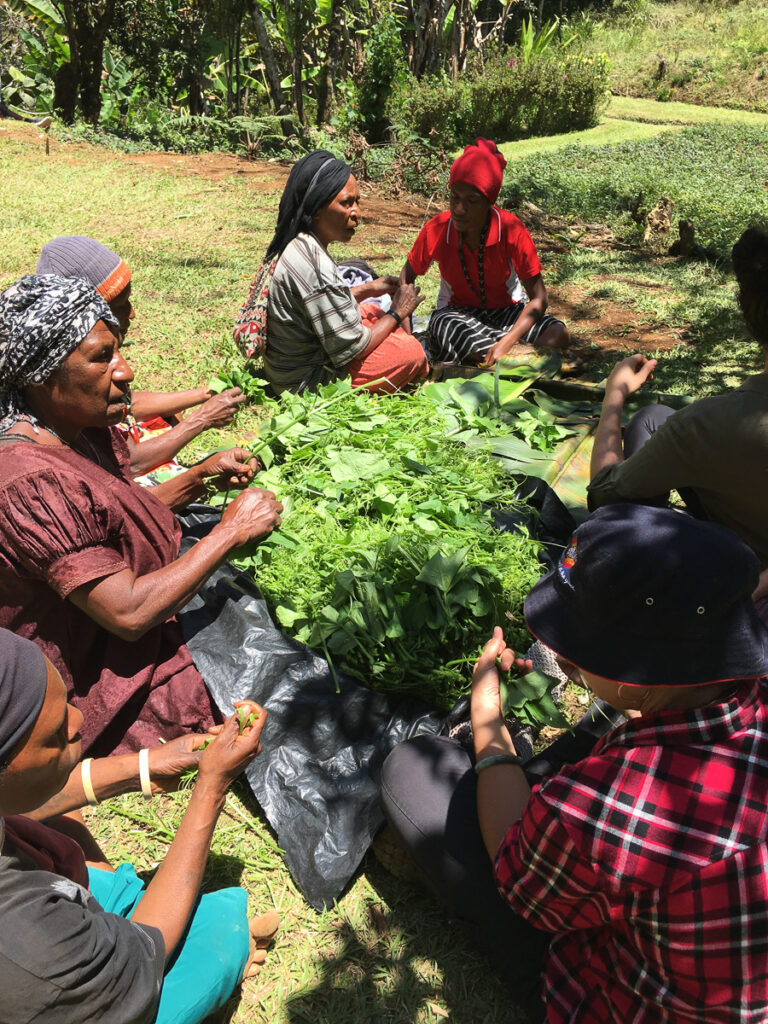 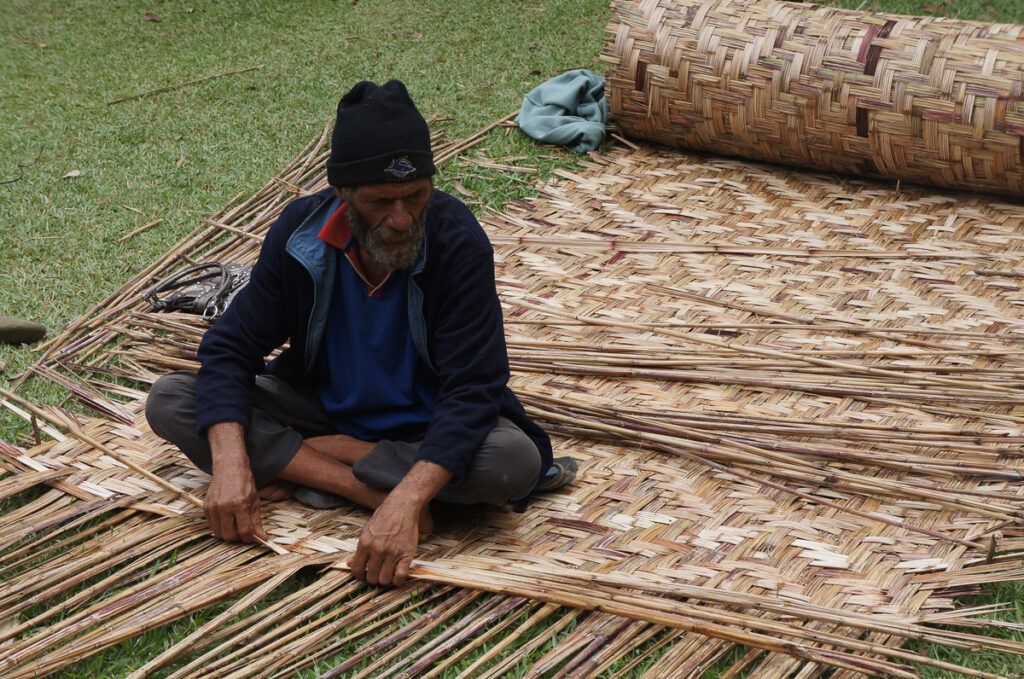 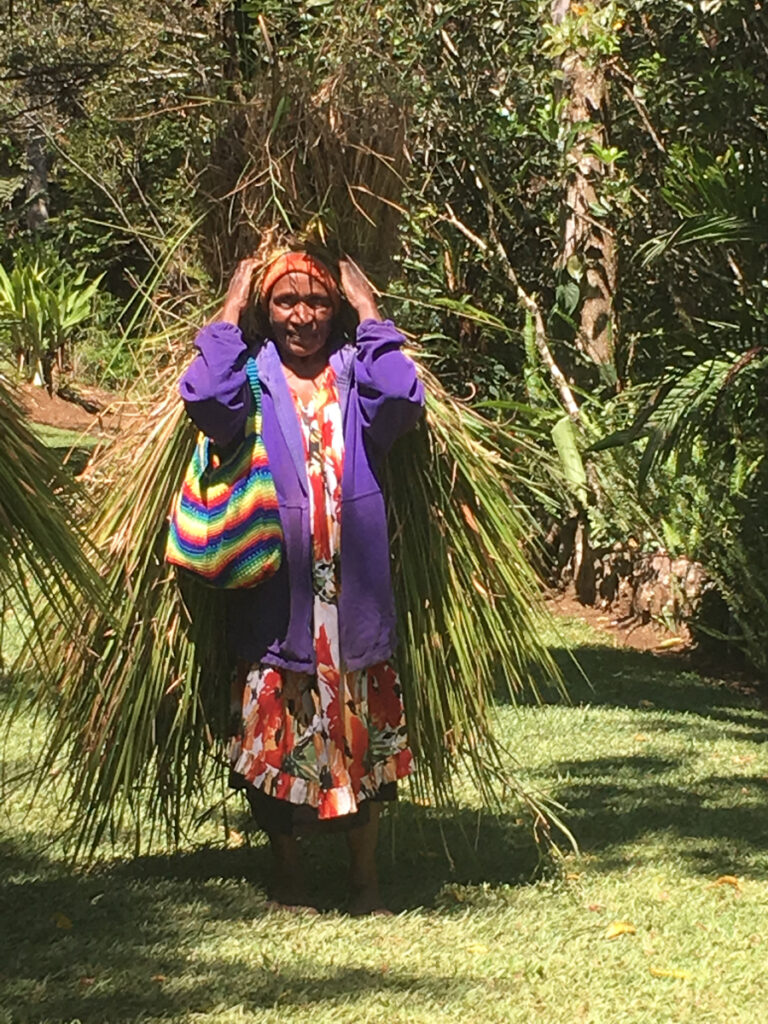 Building is a collective activity that brings the community together at Kunguma and is part of the traditional system of exchange which, in this region, is known as moka,  a complex system of gift and service exchange between kin and close associates or friends. The acceptance of any such gifts implies a moral reciprocal obligation either immediately or at a future date.

The symbolic importance of certain buildings, while no longer associated with traditional ceremonies in their context prior to the arrival of Christian missionaries, is nonetheless linked to the concept of continuity and identity constructed through architecture. The underlying sentiment attached to home is its significance as a means of maintaining connections to the land for the next generation, and the potency of identity within the Penambi social fabric.

In the Western Highlands, villages are made up of several houses, spatially organised around a central men’s house (Haus Man). Traditionally built for gatherings; important discussions, feasts for marriage, funerals, compensations and the like, decisions affecting the whole community are made in the Haus Man.

Most building materials are obtained from the forest within tribal boundaries. Trees are felled and dragged to the building site by two or more men. Once on site the logs are split, and timber posts, punga, for the main wall are shaped and sized with a machete. Kuang is the species of timber most often used nowadays. Hard and durable, it is said to last between 15 and 20 years, making it an ideal structural timber. Often the posts are re-used and relocated if a house falls into disrepair.

Woven walls, one of the most common cladding materials in this region, are known as blain. Using a type of cane grass called kumei (Miscanthus floridulus), a variety of patterns and natural colours can be designed. Native to PNG, kumei is commonly found along riverbanks, forming dense stands. Cut and bundled into a size that can easily be carried, it is dried in the sun for two or three days. The nodes of the cane are then split over a stone, and flattened by drawing through a forked stick, in preparation for weaving. 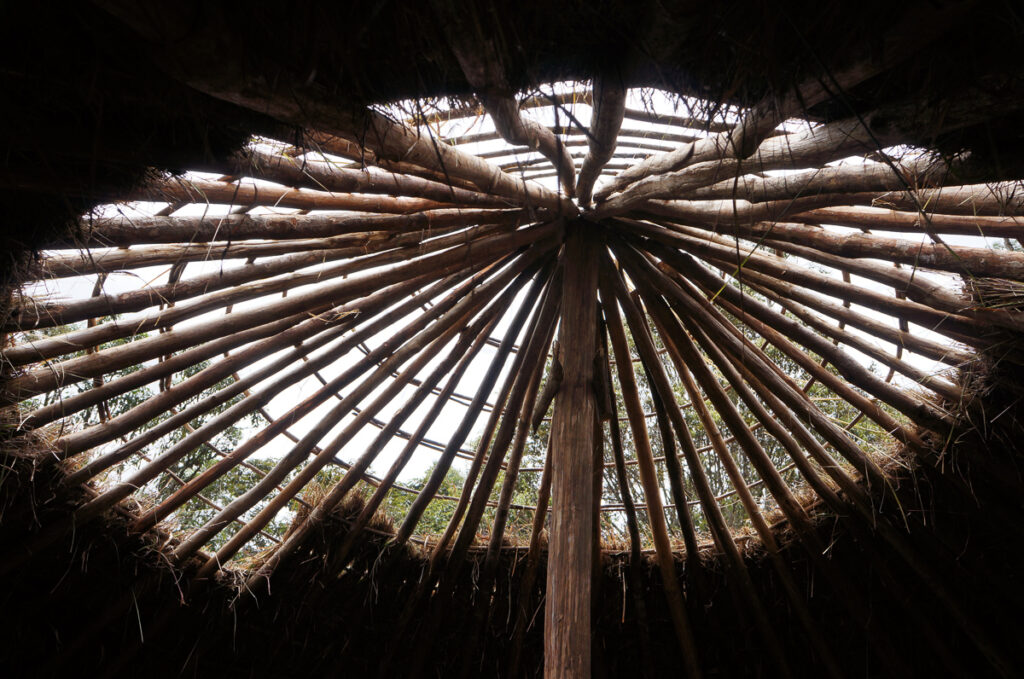 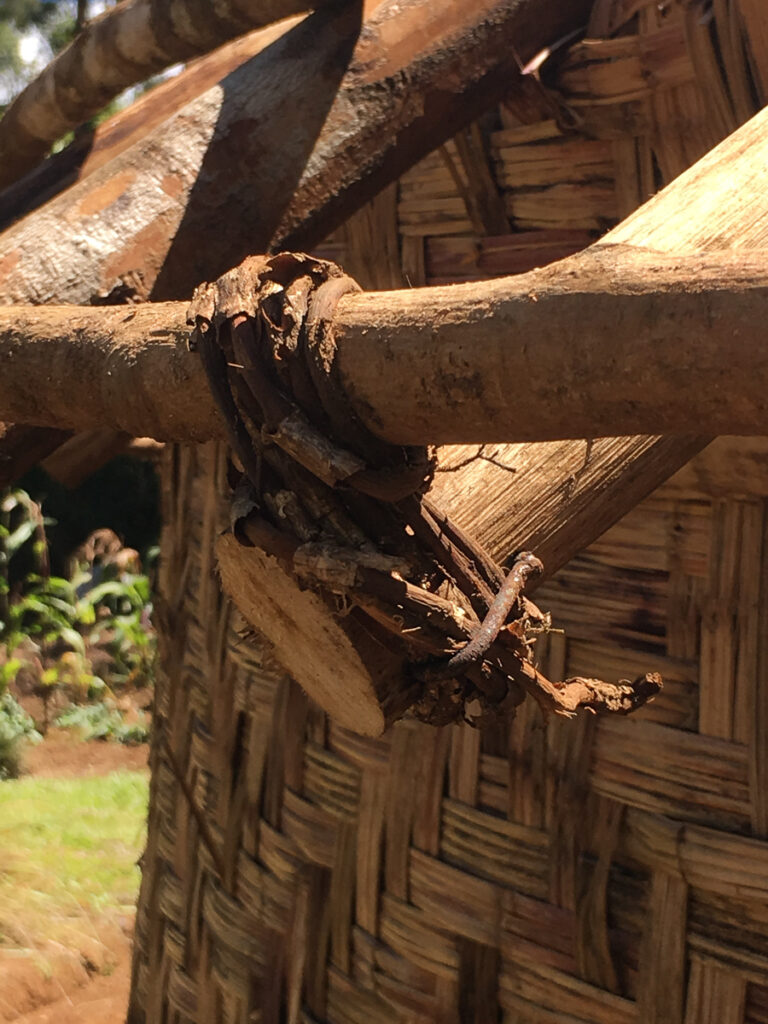 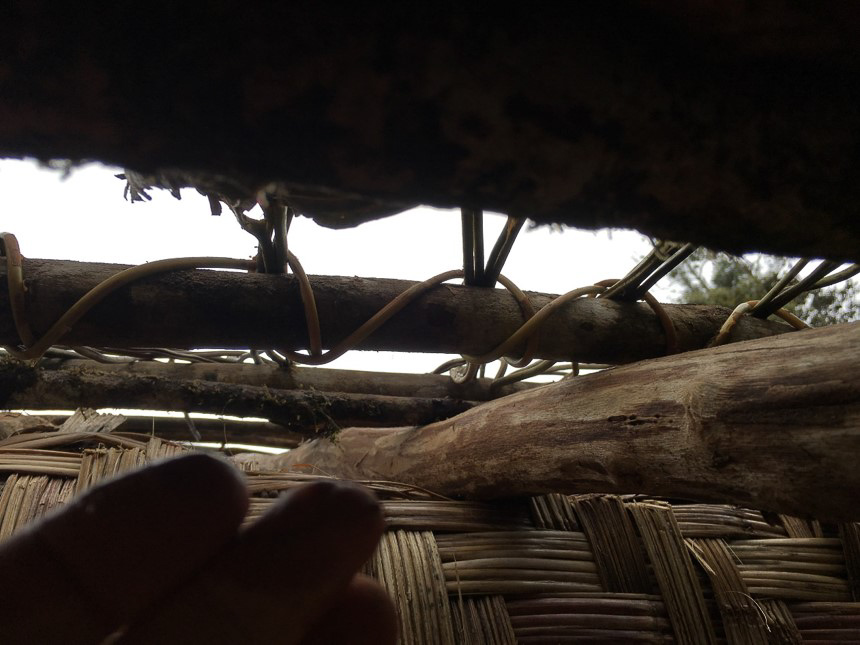 The average blain is about 1.8m wide and 12.0m long, with four rolls needed for an average small house. Although thought of as traditional, woven walls are adaptations of small projects taught at mission school about 50 years previously. Kuipa Tugl, seen weaving here, said that it takes about three days to make each blain. Previously, the buildings in this area were clad with pandanus bark or planks of split timber.

The rafters, koki, are saplings or branches spanning between the wall and centre post. Battens, tambiga, are cut from a flexible forest vine and bound with thinner vines, wieng, in a concentric circular pattern over the rafters.

Men and women work together to obtain kunai grass, ungamp, for roof thatching. When a suitable stand of kunai has been agreed upon, men cut the grass while the women bundle and carry it back to the building site, trekking several kilometres along steep, narrow pathways.

Large fern leaves, kirlkalch, are tied to the second row of battens and draped over the end batten to form a fascia hanging down from the projecting eaves. This helps support the bottom thatching and protects the ends of the rafters, while preventing rainwater from penetrating the walls.

The aesthetic qualities of traditional roofs are emphasised as the thatching nears completion.

With thatching pressed towards the centre of the ridge, a ring woven from vines and kunai is pressed around the top as a “necktie”, milkaipl, to fasten everything securely together. As a final finishing touch, a large tree fern stump is attached to the apex, kingbulg, with strong vines. Traditionally thought to be symbolic watchmen who guarded the house against enemy attack at night, these projections are now merely decoration.

Once the enclosure is complete a smoking ceremony takes place. A new firepit is built using ash from an existing house, symbolic of generational continuity, mixed to a slurry and shaped into a circular bund. Once cured, a fire is lit, smoke drifts up through the thatch, forming a black tar-like residue over several years to seal the roof.

Nourishment and reward for work completed results in a feast of yams, kaukau, greens of various kinds, kumu,  and a large variety of fruit from village gardens, all part of the informal economy and exchange system, together with the most valuable commodity of all, pigs, to provide for the tapestry of community, place and people matters, interwoven with the minutiae of everyday life.

I had hoped that my research would reveal tangible benefits for continuing the use of traditional design and construction methods, thereby contributing to the discourse on architectural solutions that are culturally appropriate, ecologically sustainable and more than just shelter and survival. On reflection, the serendipitous alignment of my research with my past links to Kunguma provided a richer and much more rewarding experience; one of laughter, warm friendships, the sadness of leaving and a renewed desire to share the creative processes of traditional building through the voices of this dynamic community.

Leaving Kunguma; walking down the mountain, the sound of Gospel singing drifts across the valley.

In the context of my visit there, we left on a Sunday morning to catch the flight back to Cairns, and needed to walk out of Kunguma because a large landslide prevented any vehicles getting in or out of the village. While the singing was uplifting, I felt sad to be leaving. Yet natural disasters are a normal occurrence in the Highlands of PNG, and life goes on.

Semper, G. (2010). The four elements of architecture and other writings. RES monographs in anthropology and aesthetics. Cambridge University Press. 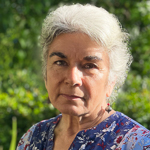 Rosemarie Rusch is a building designer, researcher and arts practitioner from Kuranda, North Queensland, relocating to the Gold Coast in 2000.  She lectures in Construction Management and Quantity Surveying at Bond University. Her current research interests are primarily in sustainable development and architecture, working in transdisciplinary research through the Centre for Comparative Construction Research, and is currently exploring the use of digital technology in architectural heritage management.

Moitará: An exchange between São Paulo and the village of Kaupüna
Judith Crispin ✿ Picturing the gentleness of death
Vipoo Srivilasa: Will my heart remember?
Heirloom: a celebration of herstories 🇵🇱
CIAF and Ghost Net art of the Far North
The craft heritage revival in downtown Hong Kong
Building a better dome
Women's Wealth Project: Biruko and Tuhu hoods