Anxi: A city of rattan and iron 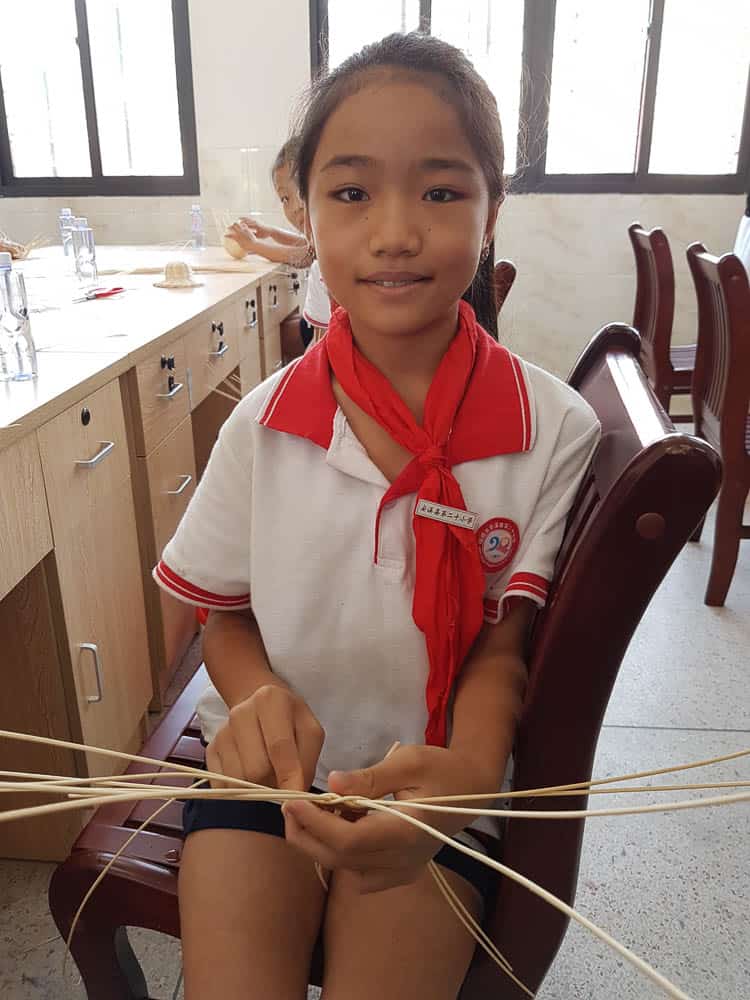 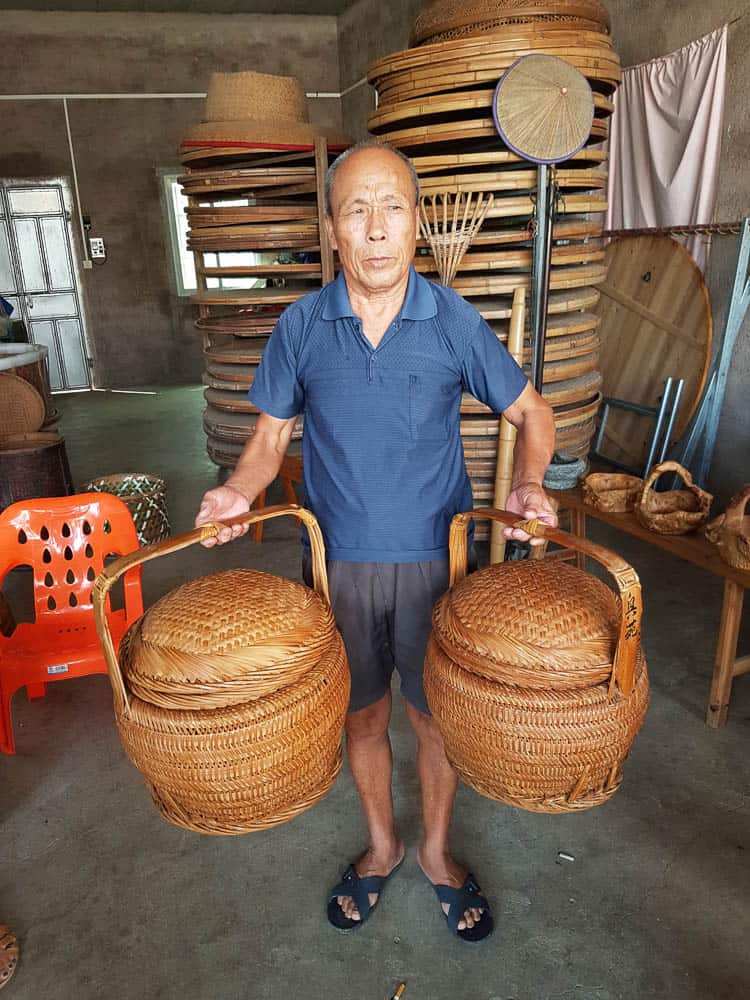 Layered basket made for temple offerings 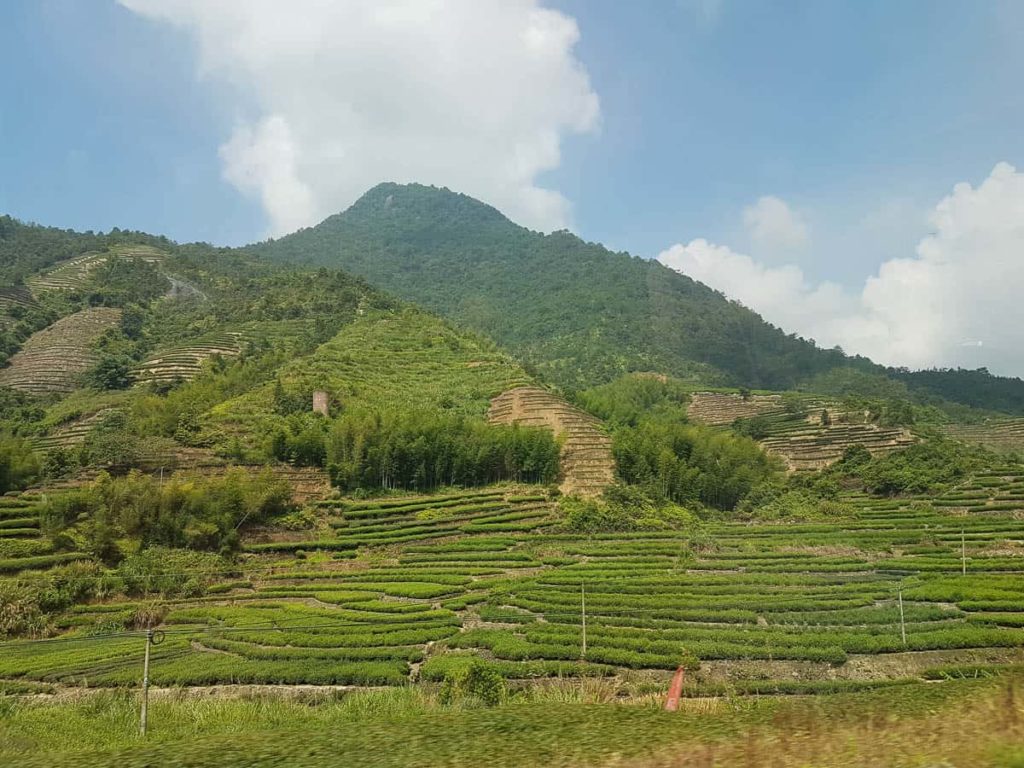 The terraced tea mountains of Anxi 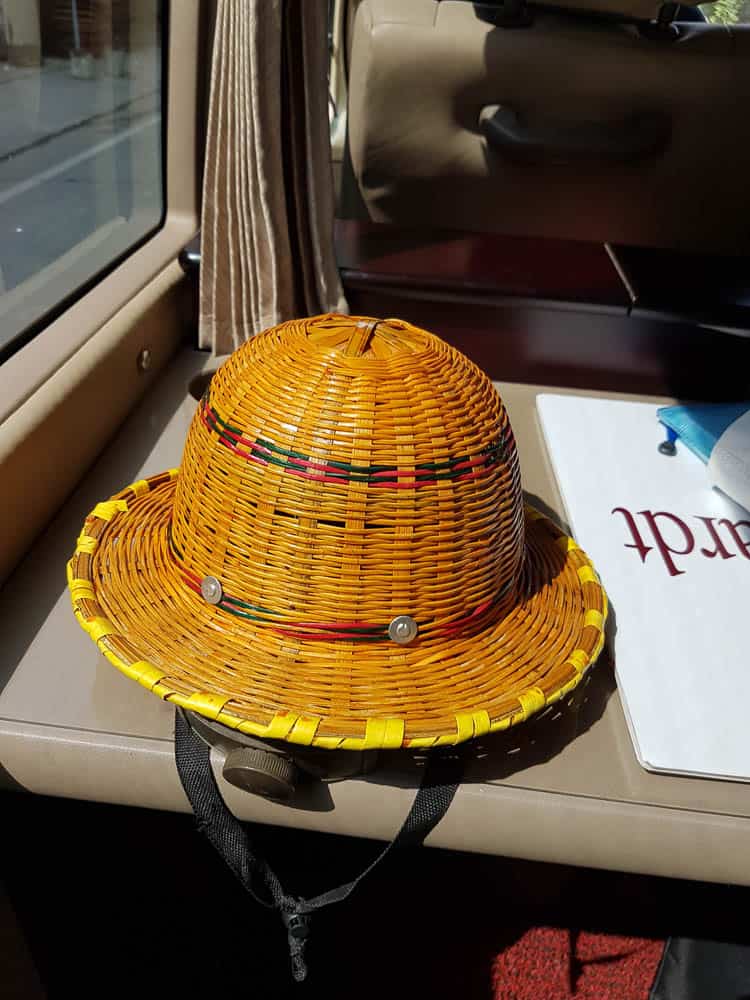 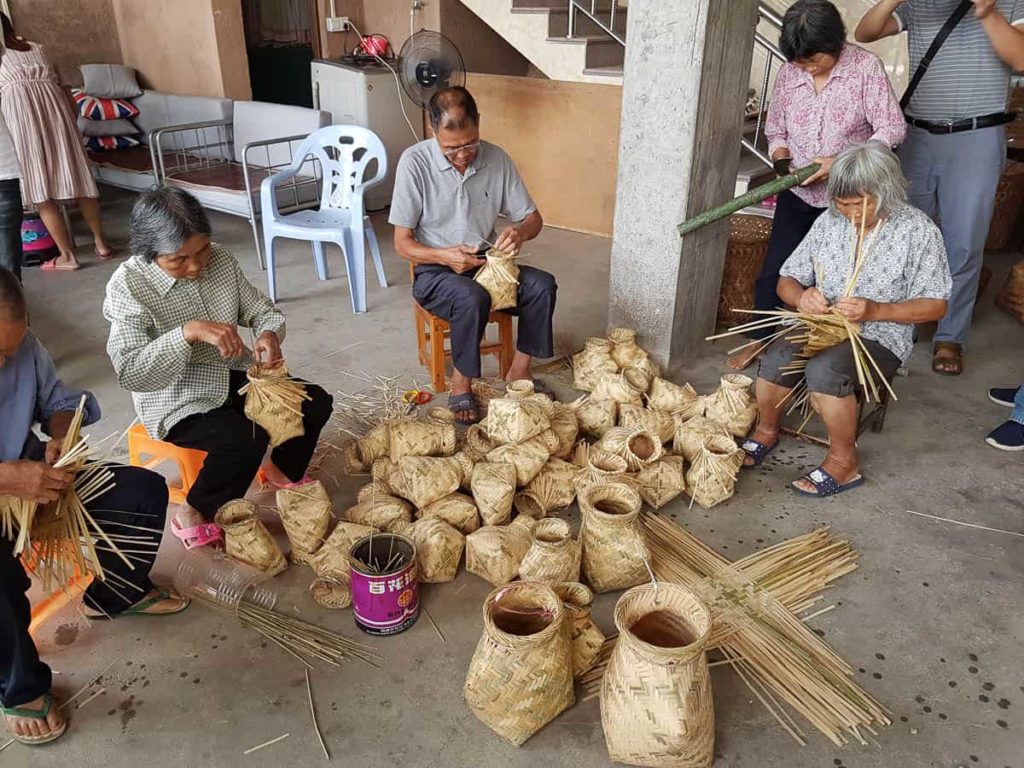 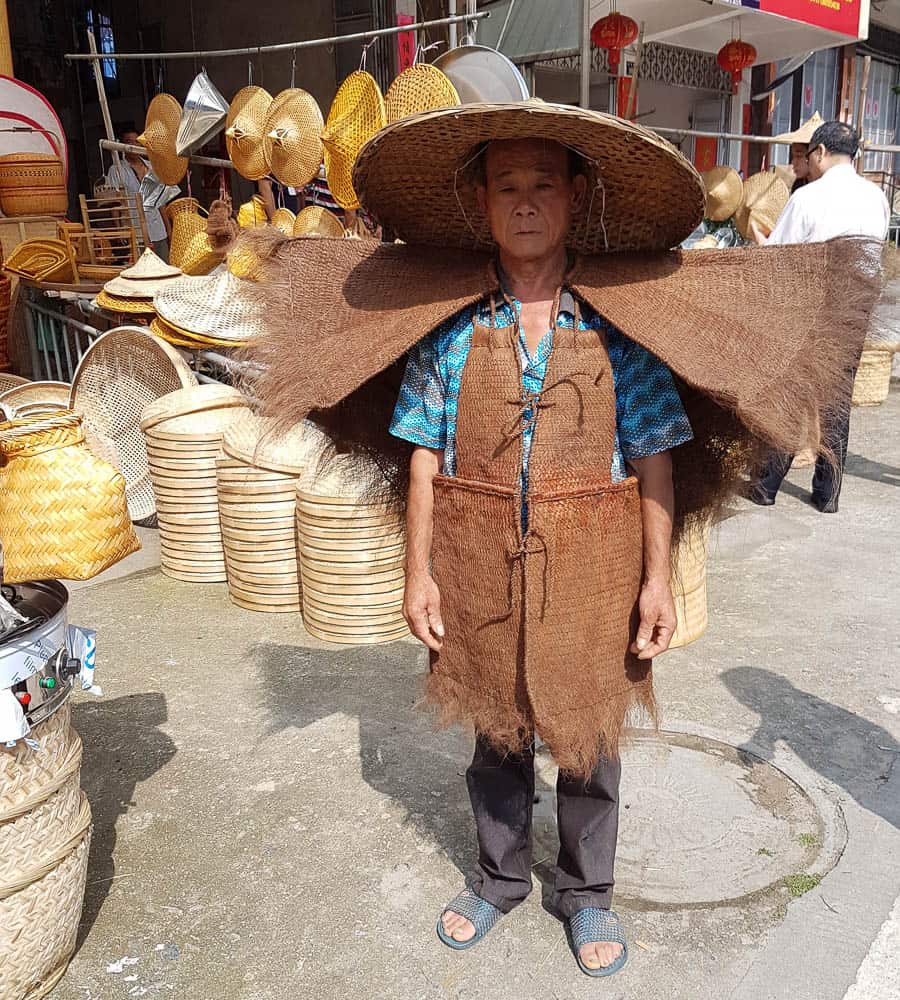 Protective garment worn by tea pickers, modelled by reluctant merchant (it was then purchased, making him happier) 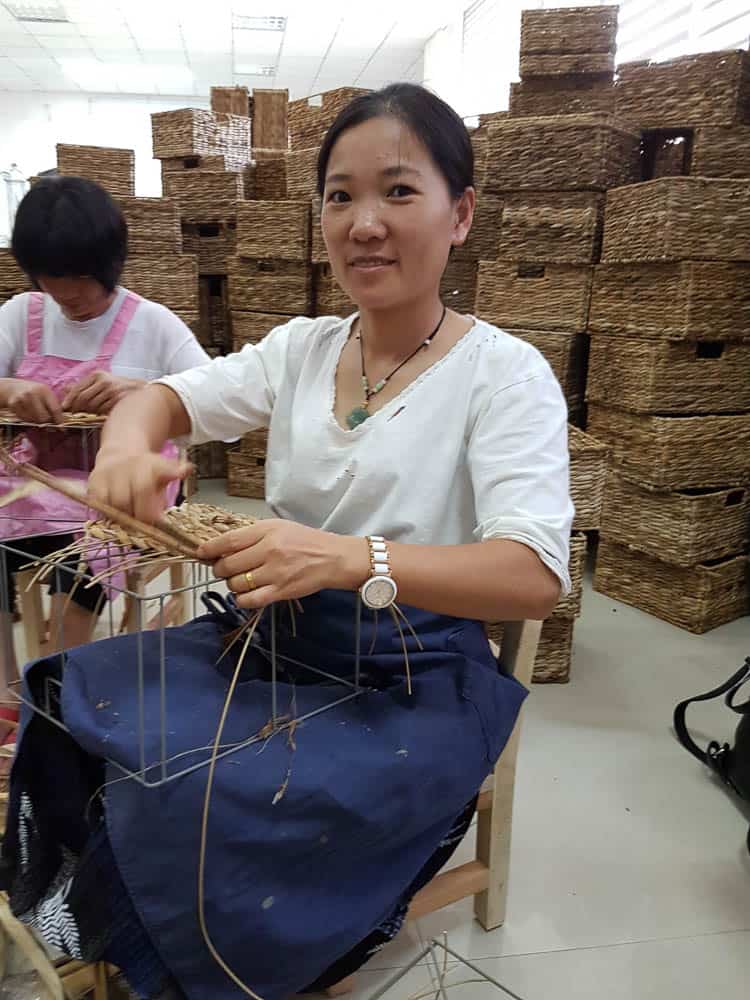 This woman may have woven a basket currently in your home.

During a visit to the southern Chinese city of Anxi, I learnt that China was much more than the world’s factory. Behind the scenes is a rich culture of folk craft and ritual. It seems that China is saving the best for last.

The Toronto room contained an assortment of gaudy household ornaments destined for the dens, living rooms and gardens of Western suburban homes.  Rooms were assigned the name of a Western city to help clients remember their selections. The Genoa room featured Halloween knickknacks, you could find Mediterranean Style in London or Christmas in Paris.

We were in Anxi, a city of 1.2 million in Fujian province, southern China. Anxi is typical of China’s astounding transformation in the 20th century. It rose out of dire poverty through well-planned industrialisation, building on its rattan and iron crafts to create production lines for export. The Party Secretary is now adamant that no one in the region today lives in poverty.

But wander through the endless warehouses and there is one story you will not be able to find – Anxi itself. The area is legendary in China as the source of the revered tieguanyin oolong tea, reputed to be the finest in the world. There is nothing in these warehouses to service the elaborate tea ceremonies where Chinese enjoy this beverage.

I was in Anxi with colleagues, Malaysian designer Edric Ong and UNESCO consultant Richard Engelhardt, to conduct a preliminary visit to help develop Anxi’s application as a World Craft City. We demanded to see some of Anxi’s own folk crafts and were driven an hour out of town to a village where locals make fibre objects for their own use, particularly collecting tea from the beautifully terraced mountains.

We visited an extended family weaving together in a circle. I asked one of the women where they sell their products. “Taobao”, she declared proudly. This e-commerce enterprise has been very successful in integrating remote Chinese villages into the economic exchange previously restricted to the major cities like Guangzhou. It offers a local market that bypasses the major export belts that target foreign consumers.

Looking through village baskets, we came across a stunning construction made of layers. I asked its function and was told that it was for temple offerings. Food could be kept in separate layers and be protected from mice. I asked when these offerings were made. It was especially popular in the festival of the dead Qingming, in April. What a contrast between these elegant forms and the gaudy pumpkins and witches that filled the warehouses in town. Cultural festivals in the West have been infected by a consumerism that transforms them into manic shopping projects. But the country servicing this process has ironically kept its own festival of the dead immune to commodification.

The distinctive combination of rattan and iron, fibre and metal, has great potential as a deeper story underlying the beautiful objects that Anxi produces for itself. The juxtaposition of hard and soft, reflecting its symbols of the dragon and phoenix, evokes the yin and yang duality that underlines Chinese traditional thought.

Visitors to Anxi who are seeking the source of tieguanyin tea cannot fail to be struck by the beauty of the landscape where it grows.

I had the opportunity to talk to a young student who had been dragged into the primary school from holidays to demonstrated basket weaving for foreign visitors. When I asked what she wanted to be when she grows up, she looked at me sheepishly, “I want to be a singer, but I don’t think mother would like that.”

I then asked whether the likes weaving baskets. I thought that since she was in a confessional mode, she might admit that it was boring and tedious. She smiled, “I do like it. It makes me feel pure inside”. It’s not the kind of statement you expect from an 8-year-old student, particularly in the West. But maybe there’s something in that purity that inspires such beautiful objects.