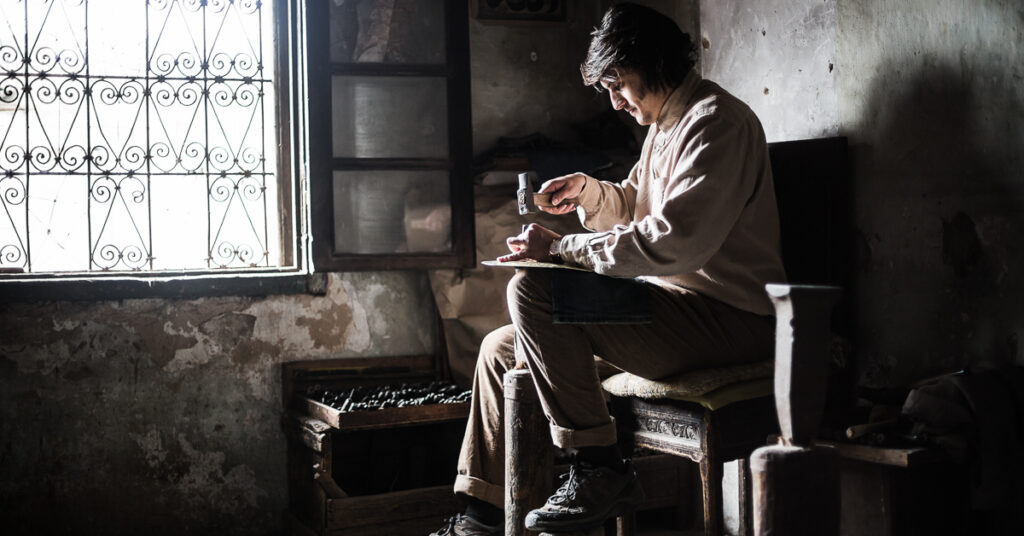 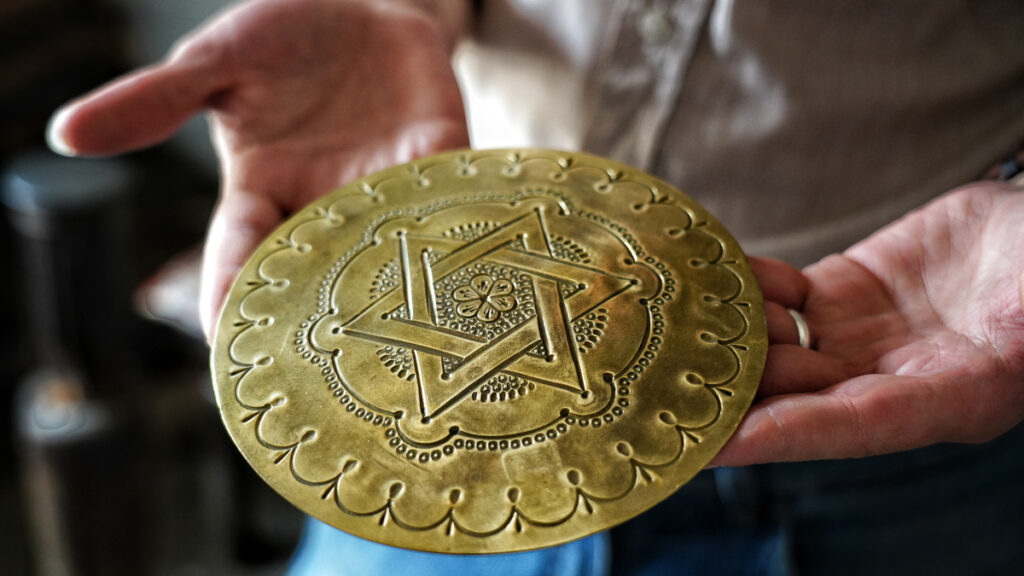 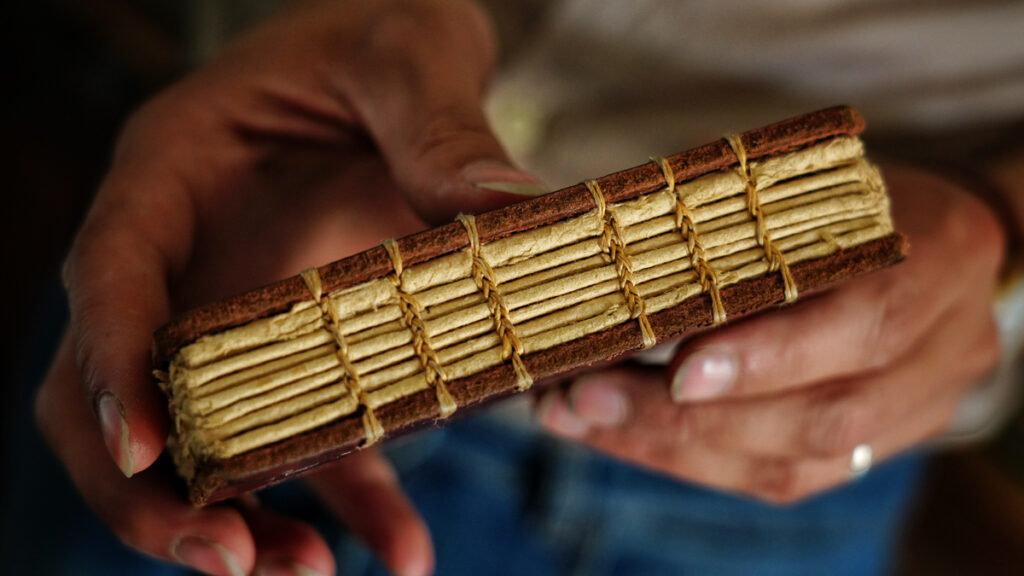 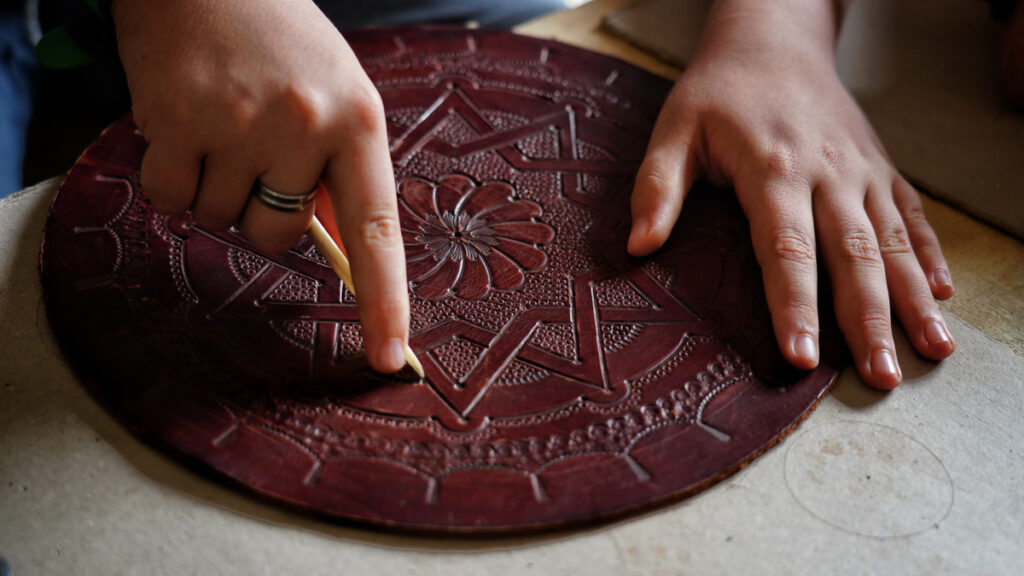 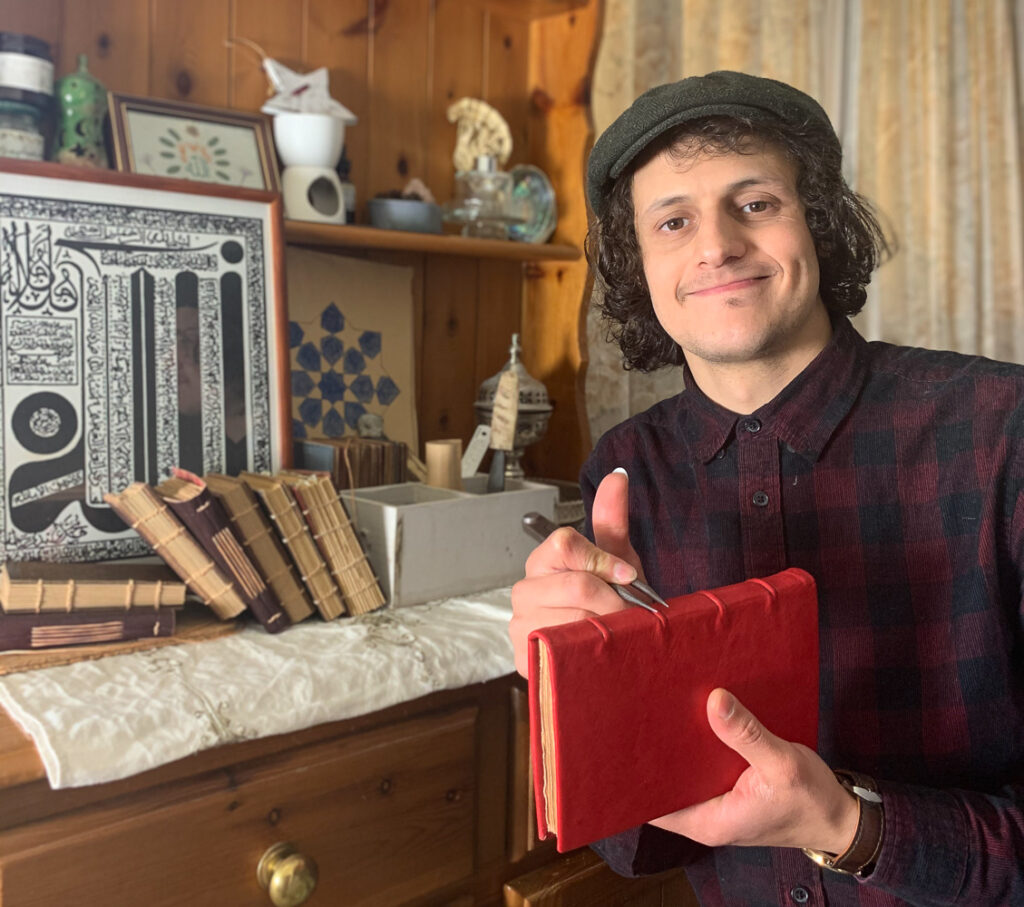 Growing up in a mathematically inclined household, Pythagoras and Euclid were often guests at our dinner table. While much of what they said evaded me, I did enjoy the action of drawing out perfect circles. I didn’t realize it then, but I was engaging in an act of mindfulness, with a compass as my anchor. As I grew older, I became obsessed with the notion of imperfection. During this time, I discovered the wonderful Japanese notion of enso. Enso is a circular form hand-drawn in one or two uninhibited brushstrokes. This represents a moment in time when the mind is free to simply create. This perfectly encapsulates what we at VAWAA hope for people to experience, which brings me to the story of Hamza. Hamza, and an entire intricate craft built on two simple ideas: the centre and the circle.

“One of the things I learned when I joined the guild in Fes is—your ego should be killed—and every time VAWAA introduces me to you all, they aggrandize my ego … and I am just glad that my father doesn’t understand English and that he is not here right now!” jokes Hamza as he is introduced to the participants of his VAWAA Online “Moroccan Geometric Patterns”. Hamza, a VAWAA artist and multidisciplinary craftsman from Fes, Morocco is a geometer, brass smith, bookbinder, Andalusian Oud musician, and founder of a Morocco arts studio. He comes from a long line of artisans. Hamza apprenticed under his father and other masters across fifteen different countries. A VAWAA, or Vacation With An Artist, provides people with intimate access to the incredible world of master artists such as Hamza. With the knowledge and skills passed down through generations of masters, VAWAA artists provide us with a unique way to experience their culture and craft. This is through five to seven-day mini-apprenticeships hosted by multifaceted, skilled artists. 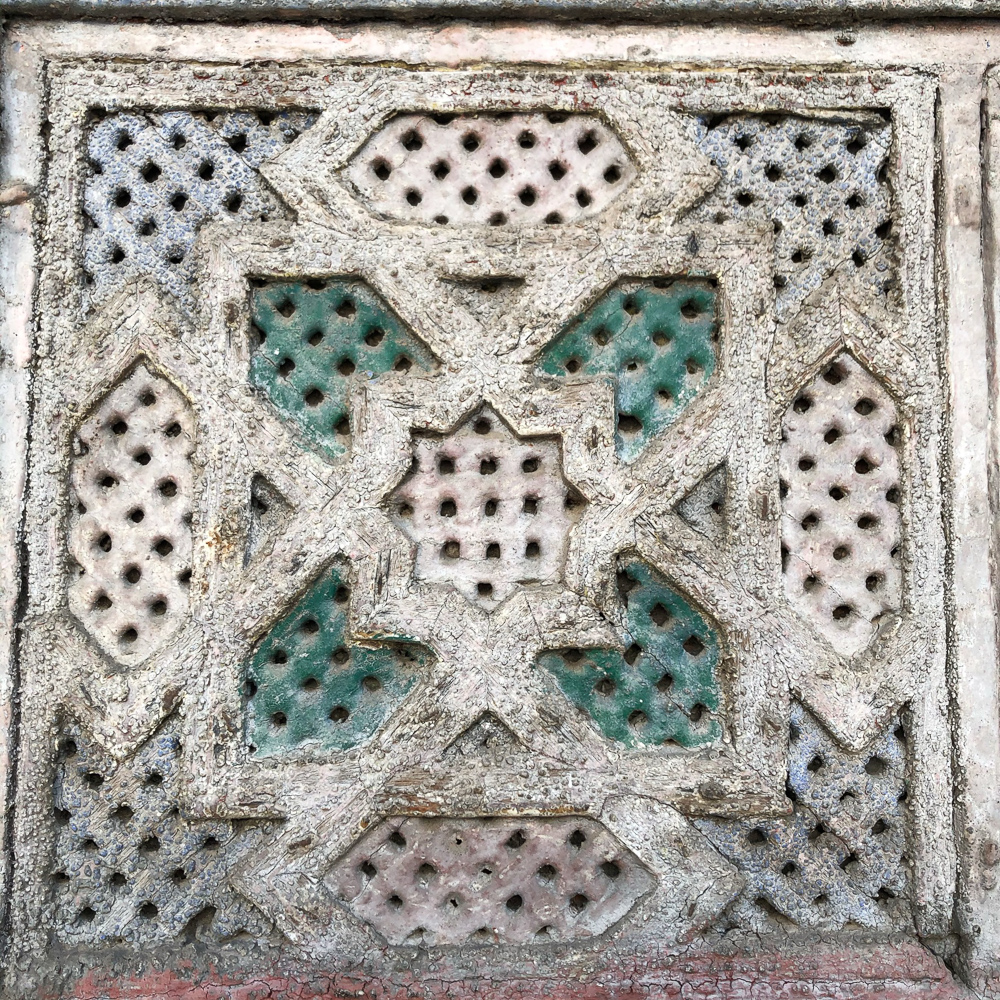 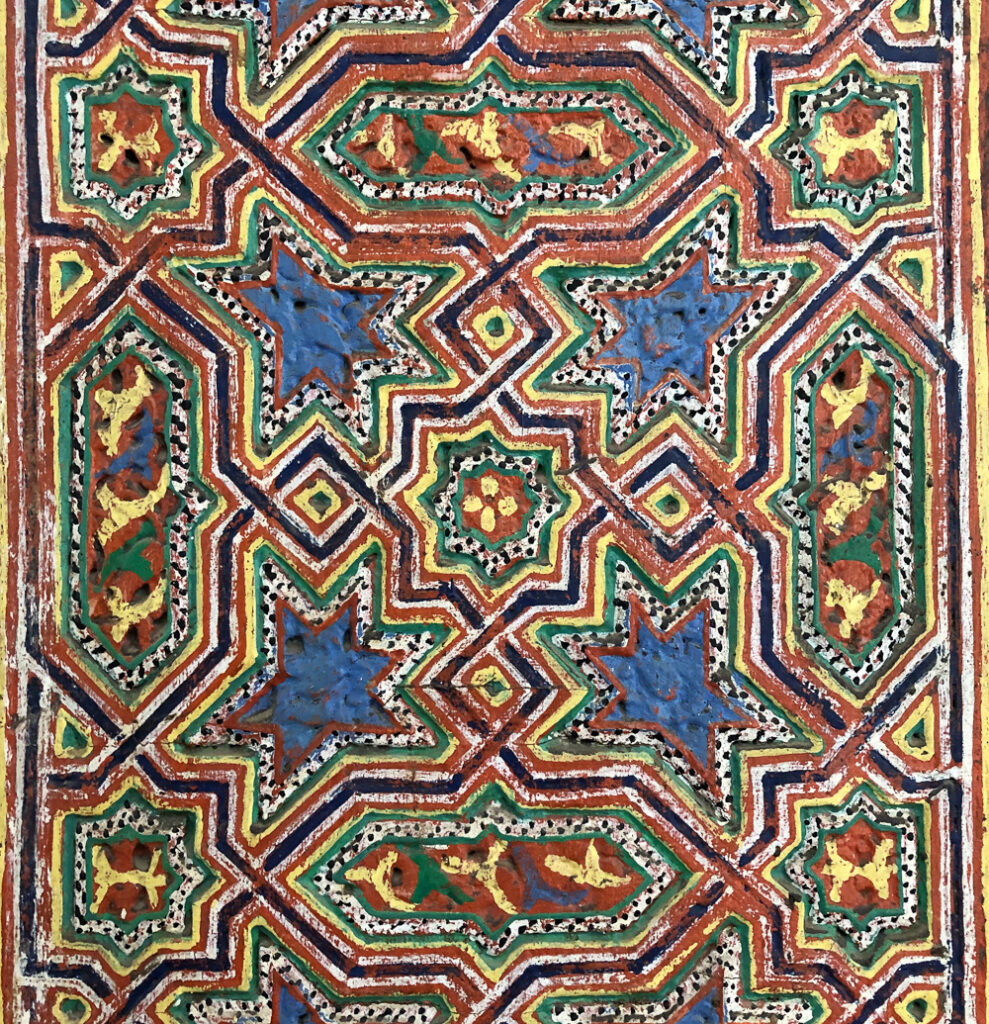 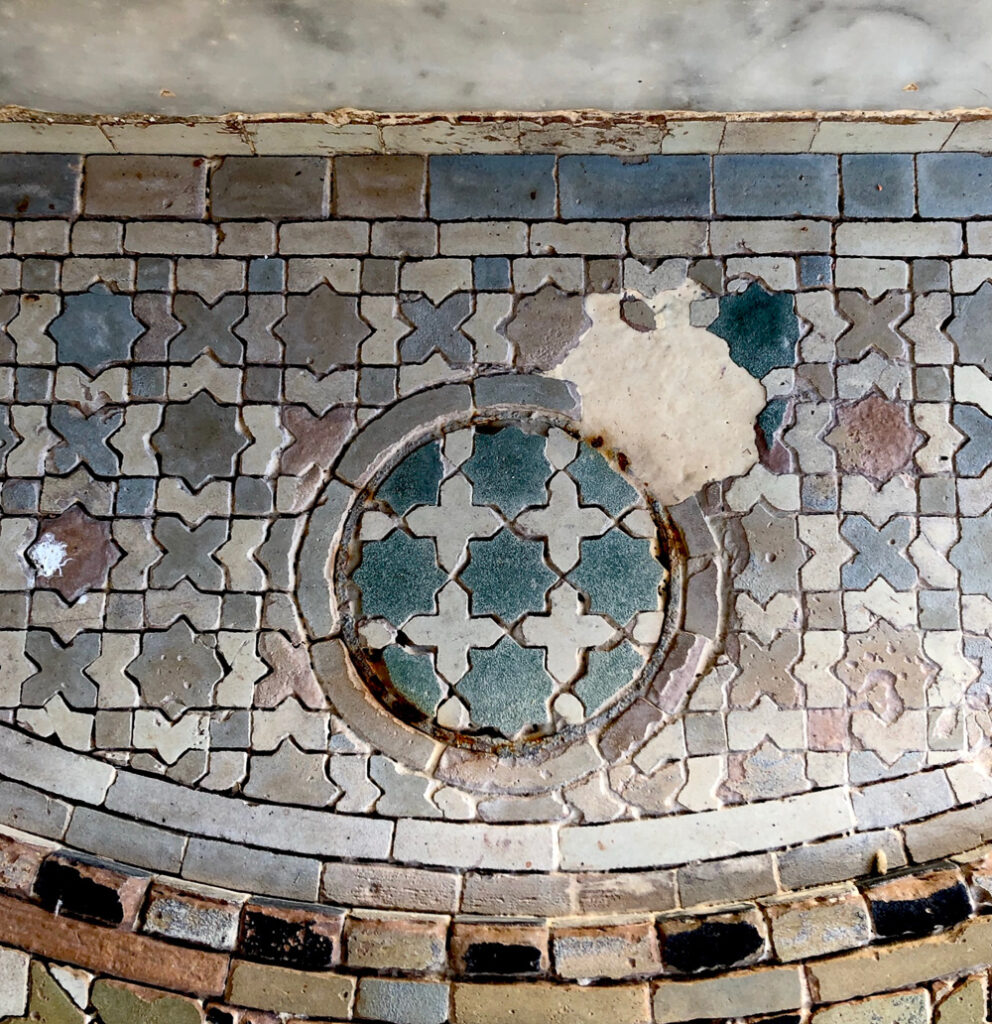 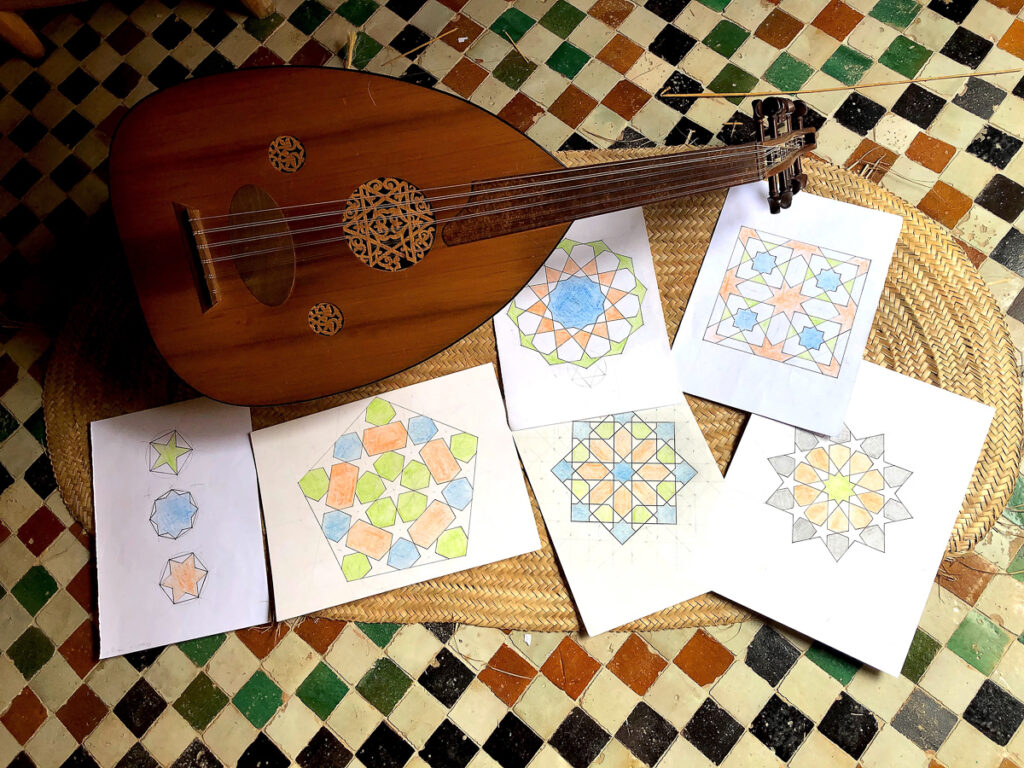 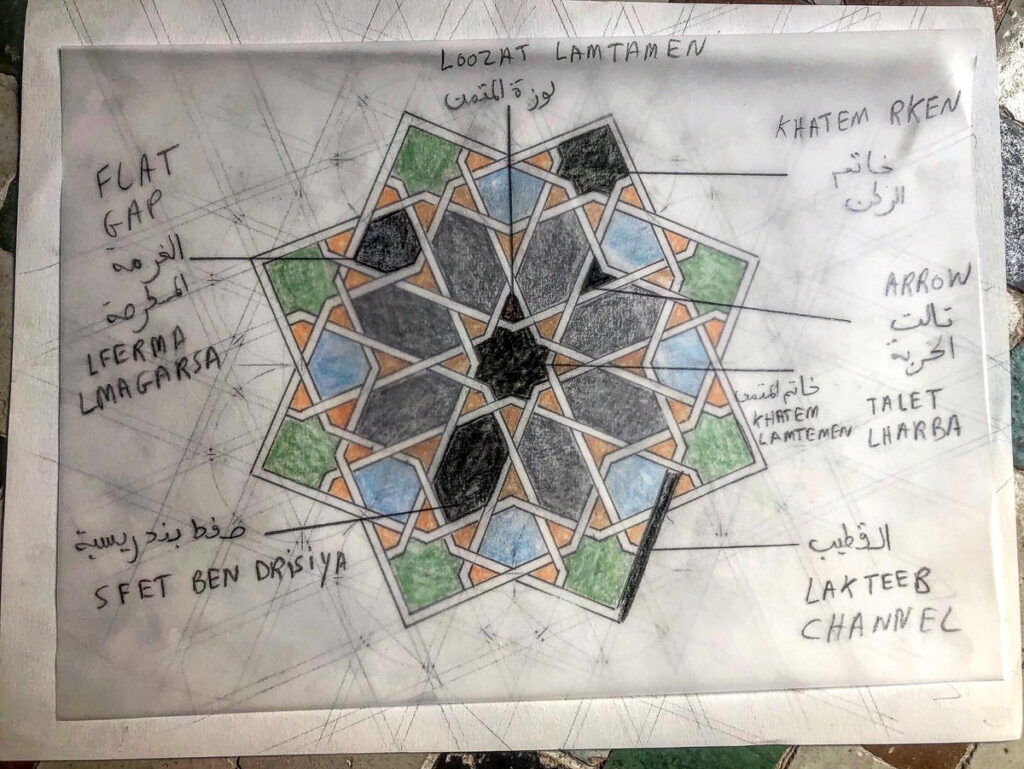 “The secrets are in the simplest patterns. If you understand just ten simple ones, you can combine them and make a huge big one. A few things about Moroccon patterns – think of them as performing arts. You can think of someone who applies geometric patterns on a brass plate as someone who is simply performing an act. And that act is bound by one simple rule, which is, no eraser, no perfection. You are always moving forward and progressing, there is no way back”.

Hamza’s beautiful metaphor reminds me of the words of famed Persian poet Jalal ad-Din Muhammad Balkhi (possibly known to you as Rumi). “As you start out on the way, the way appears”.

In this session, Hamza presents how to recreate a circular pattern, which is traditionally found in the Al Quaraouiyine mosque. This was first founded twelve hundred years ago. Hamza explains that the main common point between all symbolism in Islamic patterns is that everything is facing the centre, which represents the unity of God. The first step, he says, is to find the centre. When Muslims pray, in the act of praying, they face the direction of Mecca, and so for Muslims, these patterns are perfect, as they all face the centre. All patterns begin with a centre, and a circle. Through the lesson, the camera pans to the work in progress of participants sitting in, from across the world, as they share their patterns, and follow up with different questions. Hamza is speaking to everyone live from his studio in Fes. During the pandemic, VAWAA began to offer what many people yearned for. A connection to other cultures. A widening of each person’s circle. Through VAWAA online experiences, artists such as Hamza helped people around the globe connect with a sacred art form, and provided a window into another world.

Hamza and the VAWAA online participants continue to talk to each other after the more than two-hour online experience comes to an end. “Moroccan geometry is all verbal traditions, unfortunately, nothing is written down,” says Hamza, as he brings out his beautiful Andalusian oud, a stringed instrument. The pick, he says, is made by a friend of his who is 91 years old, who is the last known artist who makes them from bull horn from Andalusia. Traditionally, it used to come from the bulls who lost it during bull-fighting, and the horns were shipped to Morocco where they would become picks for the oud. Hamza ends his lessons by playing on the oud, a perfect way to conclude this beautiful and engaging experience. “The logic of the music sheet is similar to the logic behind the construction of geometry. They all have patterns and basic constructions”.

Hitasha, a participant, shared that the surprise moment was when Hamza played the oud for them after they were done with pattern making. It made the whole experience personal and real to her.

Mona loved how he provided them with variations, different possibilities of the pattern. This piqued her curiosity and nourished her creativity.

Tania feels that being able to participate in the Moroccan Geometric Patterns session with Hamza was educational and inspiring. “Not only was his teaching wonderful but getting to hear him play the oud was a treat every week. My fellow classmates were also inspiring and I hope to take more classes with Hamza in the future… perhaps one day in Morocco!”.

Tania might not have to wait very long. As countries begin to reopen their borders, a Vacation With An Artist seems to be the best—and the safest—way to travel. Travelling to, and spending time in a single destination is the safest option for travellers and local communities. Covid protocols are well managed before and after the VAWAA.

Ultimately, VAWAA is an invitation to inhabit the rich, multilayered, world that is an artist’s most sacred creative circle. Standing at the centre of this circle, one finds themselves a series of incredibly special, irreplaceable moments that one never would have experienced otherwise. The perfect way to step out into the world again. Life seems to have once again come full circle.

Kimsuka Iyer is a member of the VAWAA (Vacation With An Artist) family, passionate about encouraging people to transform through creativity, curiosity and connection. When she’s not drawing circles, she can be found reading historical fiction or practising the art of lucid dreaming (napping involved).

Garland received no payment for this article. We support businesses that support culture-makers, especially during the COVID-19 pandemic.