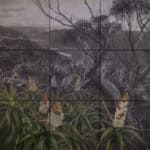 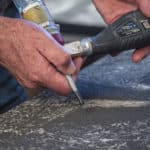 Hewitt drawing with ash onto canvas, Photograph by Bewley Shaylor, 2018

Running for three weeks only at Gallery Central in Perth, Recinder features the natural monochromatic tones of ash, collected from Western Australian and Tasmanian fires. This ash is layered onto canvases to create a series of vulnerable and uneasy landscapes which bring into light destruction, rebirth and forgotten histories.

Hewitt collects ash, then grinds, filters and separates it into five different tones, and then creates the artworks using two distinct techniques, unique to his practice. He developed special tools in order to lay down the ash on the canvas, a painstaking process which must be done in a completely windless environment.

In the first technique, Hewitt places small pyramids of ash of different tones to create an image broken into pixels.

In the second technique, he uses a specially made tool with a nozzle in order to “paint” with the ash, drawing fine lines on the canvas. Each work takes approximately three months to complete, with some taking up to six months.

From up close the viewer is confronted with a digitised abstraction in burnt ash, but from a distance the works look almost photographic, full of details that take time to reveal themselves.

Hewitt said the result functions as a metaphor for the disappearing landscape itself, along with the many endemic species of flora and fauna it supports.

“Ash is a strange medium and it is loaded with inherent meaning,” he said.

“For me there is something very exciting about taking a material that has be discarded and attempting to give it new life by returning it to a form that resembles what it once was.”

Hewitt is based in Perth, a graduate of the Claremont School of Art. He grew up in Tasmania and spends part of the year there. The Tasmanian landscape is the subject of the works in Recinder.

In some works, he takes the romanticised landscapes of colonial artists like John Glover and Frederick McCubbin and places them in a contemporary forest of ash. In others, he juxtaposes rough, monotone ash with another medium that is the complete antithesis, smooth wax coloured by oil paint.

“Collectively, this body of work speaks about more than just a landscape at risk. It addresses colonial attitudes which have determined our natural and social relationships as Australians,” Hewitt said.

“I investigate, through juxtaposed subjects and mediums, my personal reflection on a history, land, and identity contested.

“This serves to make reference to what has gone before, what is now and what is to follow.”

Recinder is Hewitt’s first solo show since 2011 and features 12 new works, created over a six-year period.

He has exhibited extensively in solo and group shows around Western Australia and nationally and has received many local and national art awards throughout his career, including the 2009 Black Swan Prize for Portraiture for his Portrait of Richard Woldendorp.

In 2015 Hewitt won the prestigious Glover Prize, the country’s richest landscape art award, with Woven, an artwork using ash from the 2013 Dunalley bushfires. A study for this work, along with several large-scale artworks feature in the exhibition.

Hewitt’s work is widely collected and he is represented in the collections of the Art Gallery of Western Australia, Curtin University, Edith Cowan University, Artbank, SGIO, BankWest, Wesfarmers, Holmes a Court, The Stein Collection, among many others.

In 2016 he was granted a Creative Development Fellowship from Culture and the Arts (WA). This exhibition has been developed as a result of this fellowship.