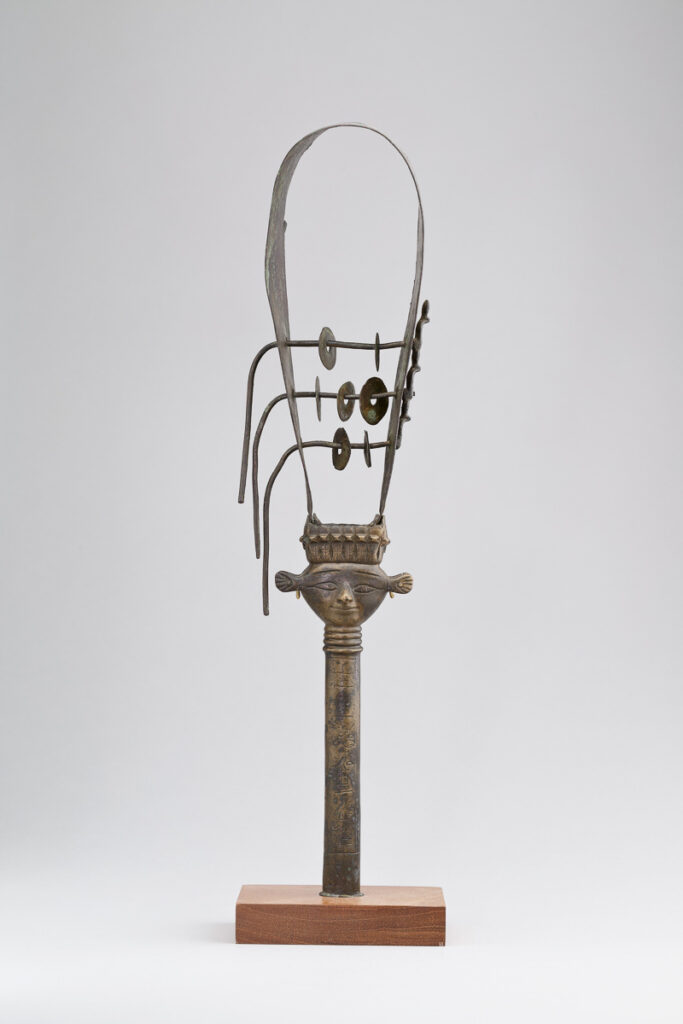 In the sixth and final instalment of #africamade_n_played, Gary Warner reveals the ubiquitous source of rhythm that animates African music and bodies.

Crowded beyond the limits of adequate description innumerable manifestations of rattles and shakers playfully animate the polyphonic soundworlds of African musical traditions with a bewildering diversity of buzzes, clacks, swishes, clatters, crackles and shimmers. Each idiophonic instrument has its characteristic sonic signature arising from its materiality, construction, durability, articulation and cultural specificity. Hand-held, body-worn or instrument-attached, each type provides different ranges of expressive and sonic potentials that, across the continent, reinforce the rhythmic core and enhance the sensuous vibrancy of African music, song and dance.

Handheld types such as the hosho, kayamba, shekere and axatse allow for the broadest range of individuated activation. Every muscle and surface of thumbs, fingers, palms and wrists can be brought into play by striking, twisting, spinning, rising, falling, flailing, shaking. Movement can be fast to slow, strong to weak, insistently rhythmic to inventively improvisatory, and the resultant sound skilfully modulated from loud to quiet.

Body-worn types such as the ideh, magavhu and ngonda produce sound in response to movements of the dancing or instrument playing body. While the range of sonic effect of body-worn shakers might be somewhat constrained, there is still a breadth of nuanced variety available to the practised performer. Instrument-attached shakers such as the guembri’s sersal, the djembe’s ksink ksink and the mbira’s machachara tend to be sympathetic resonators quivering and sounding in response to vibrations of the host instrument. All types make a significant contribution to the interdependent ensemble of sounds particular to the musical expression of each locale, language and tradition.

Four thousand years ago in ancient Egypt, documented in definitive paintings and archaeologically recovered in material remnant, the handheld sekhem or sesheshet was shaken by priestesses in ceremonial worship of deities Hathor and Isis. It was a rattle made from an elongate hoop of bronze, wood or ivory with rods pushed through the sides and sometimes paired discs loosely threaded onto them. When waved to and fro in the hand, the rods shift back and forth striking the hoop, and the discs knock rhythmically together. A possible antecedent of the modern tambourine, the instrument radiated throughout the Mediterranean where it picked up a Roman name, sistrum, with Greek origins meaning “shaken thing”. Millenia later, and a long way from home, the sistrum was specified by the French composer Hector Berlioz as an additional instrument in the orchestra for his 1850s opera Les Troyen.

The sound of small loose objects such as seeds or pebbles captured within a hollow container such as a calabash, moth cocoon or woven palm-frond box is not only used for maintaining beat. In many traditions, the sound is believed to be a sacred one which spirits gravitate to, and ancestors hear. The Edo people of Benin honour and summon their ancestral lineages using ukhurhe, intricately carved tall wooden staffs placed on cumulative ancestral altars at the passing of a respected elder. 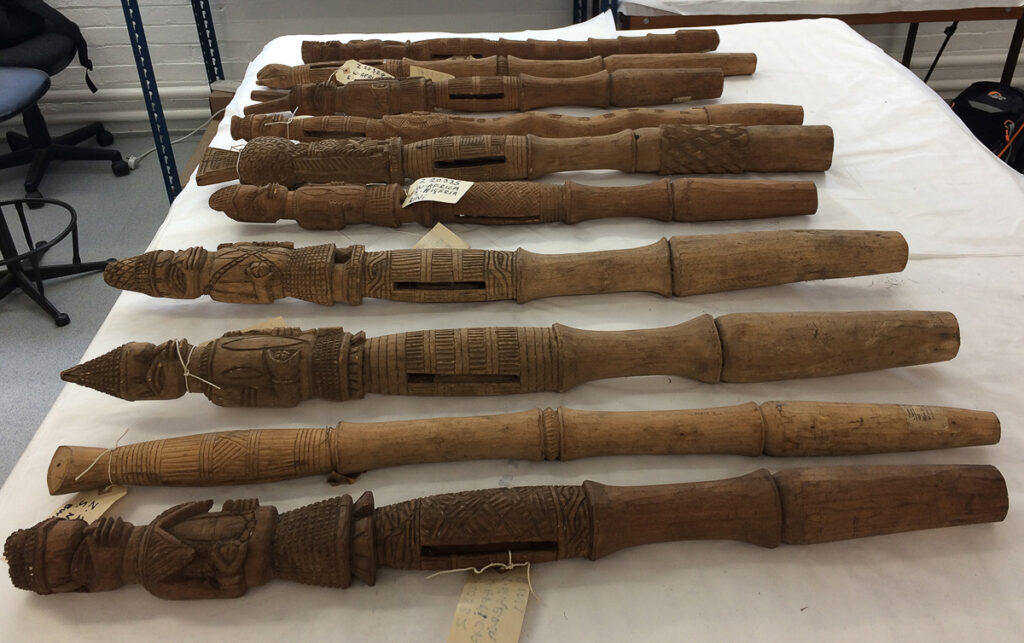 The form of the ukhurhe rattle-staff includes a hollowed section with a piece of timber trapped inside. When struck forcefully on the earth, the resonant wooden clatter connects the living present with the spirit world of ancestors. The olusangu of the Umbundu of Angola is a hand rattle made from a group of dried spherical seed pods of the tree Oncoba spinosa. Filled with small seeds and mounted in a row on a wooden handle, it is sounded by costumed figures during important ceremony. A 1929 expedition for Chicago’s Field Museum of Natural History was told an olasungu is used by a mother of twins or triplets to greet others, instead of spoken word, to protect the lives of her multiple offspring. 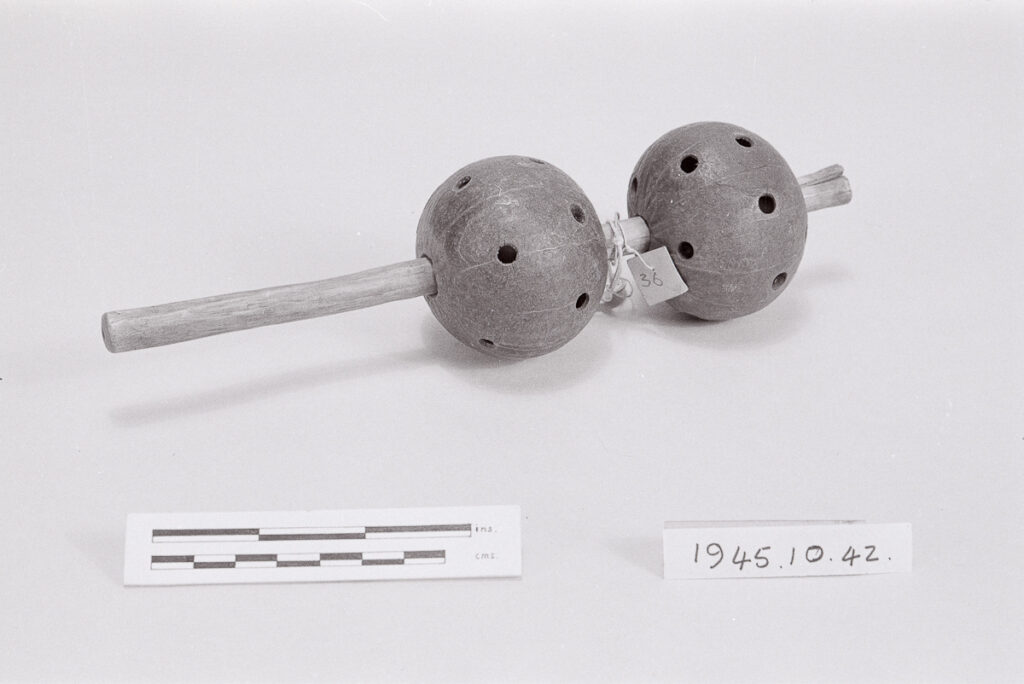 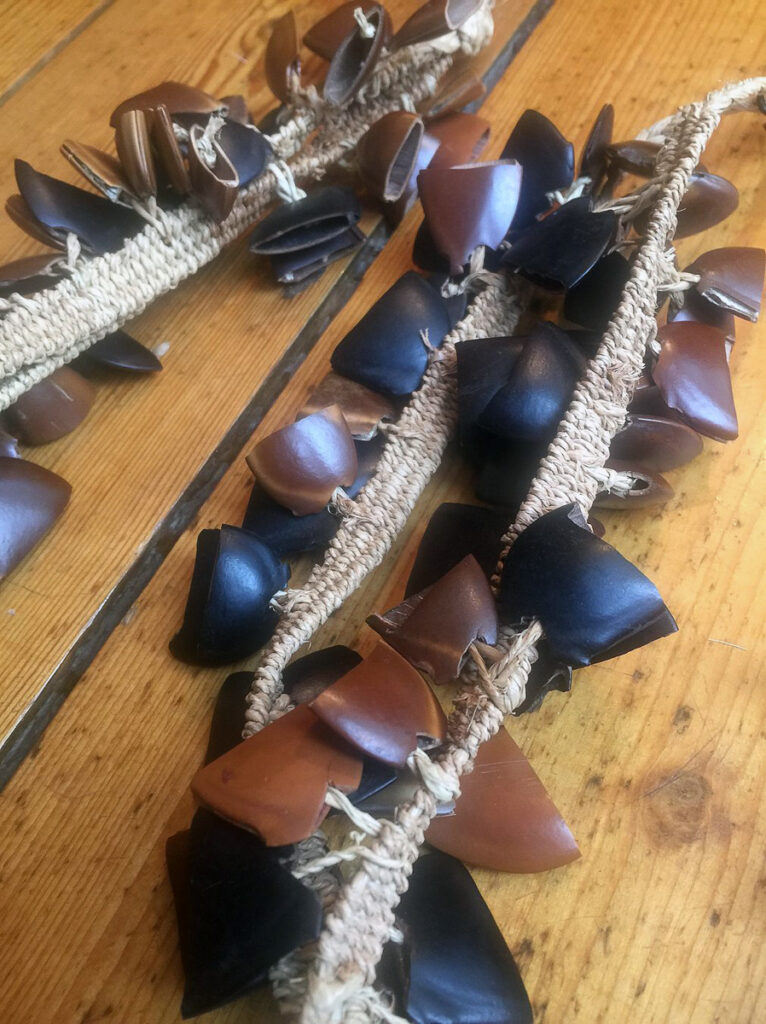 Ideh are body-worn rattles of the Igbo people. Made from dozens of hollow woody seed pods, halved and gathered together with twine, they are worn on the ankles to sonify the movement of dancers. Ideh generate a light clattery sprinkle of sound that varies with leg movement such as side to side, stomp, or jump and land. 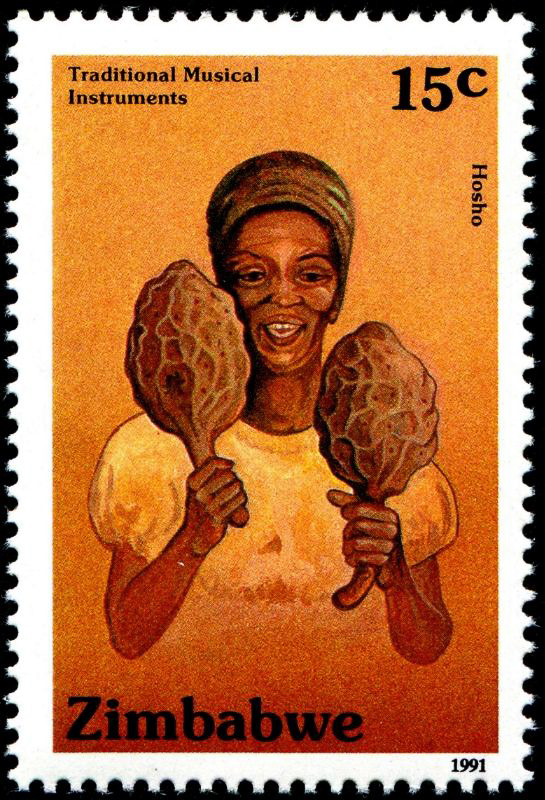 Handheld hoshos, played in pairs, are the partner instrument to the Zimbabwean mbira. Made from dried mapudzi gourds (Lagenaria sp.) filled with the black round seeds of hota—the canna lily—traditional hosho have distinctive wrinkly skin and curved form. In performance, they sustain the timeline rhythms alongside mbira, with a sharp, clear cracking sound that energises players and audience who may well be singing and dancing. 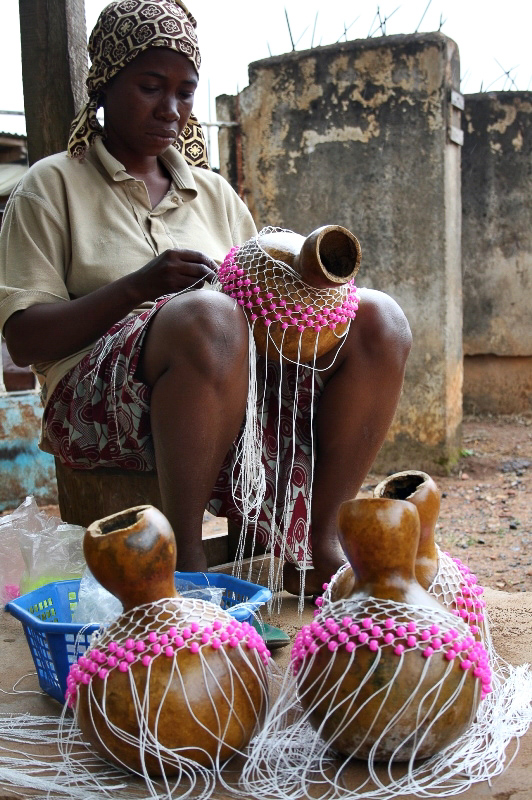 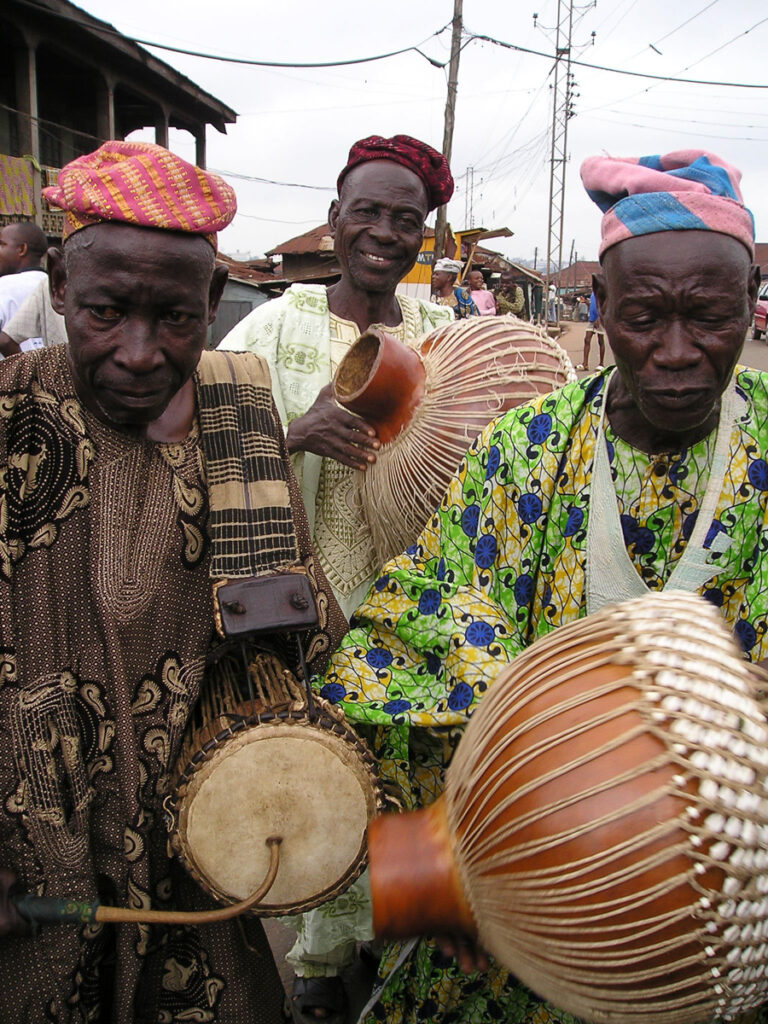 Shekere is one of many names for a hollow dried calabash open at the top and covered with a loose fibre net studded with seeds, shells or beads. Originating in west Africa, it is today one of the most widely diffused musical instruments throughout the African diaspora. Shekeres are made in numerous sizes and variations of fibre, net structure, threaded sound objects and sound production. The somewhat unpredictable natural shape of the gourd predetermines aspects of the instruments sound. In Nigeria the agbe is the largest version, a sacred instrument never shared by the initiated designates who play them in groups for ceremony. Shekere can produce many different sounds: a pitched whoomp when struck on the base, pa and ta when tapped, various shishes when the net is rolled either by gravity or by hand. Adroit repetitive combinations of hand, arm and body movements create a characteristic rhythmic sound that underpins much sacred, secular, festive and ceremonial music of west Africa, Cuba, Haiti, Brazil and “world music” stages everywhere. 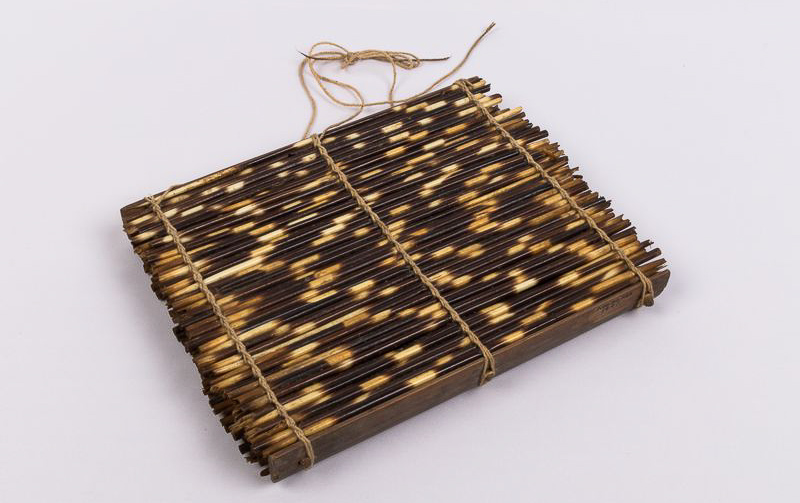 Kayamba – Banjuni people, coastal east Africa. This kayamba was collected in the field by Diana Powell-Cotton c1936. Two panels of porcupine quills are bound together with cotton and separated by bamboo panels along the sides. The box contains small white seeds for sound activation. 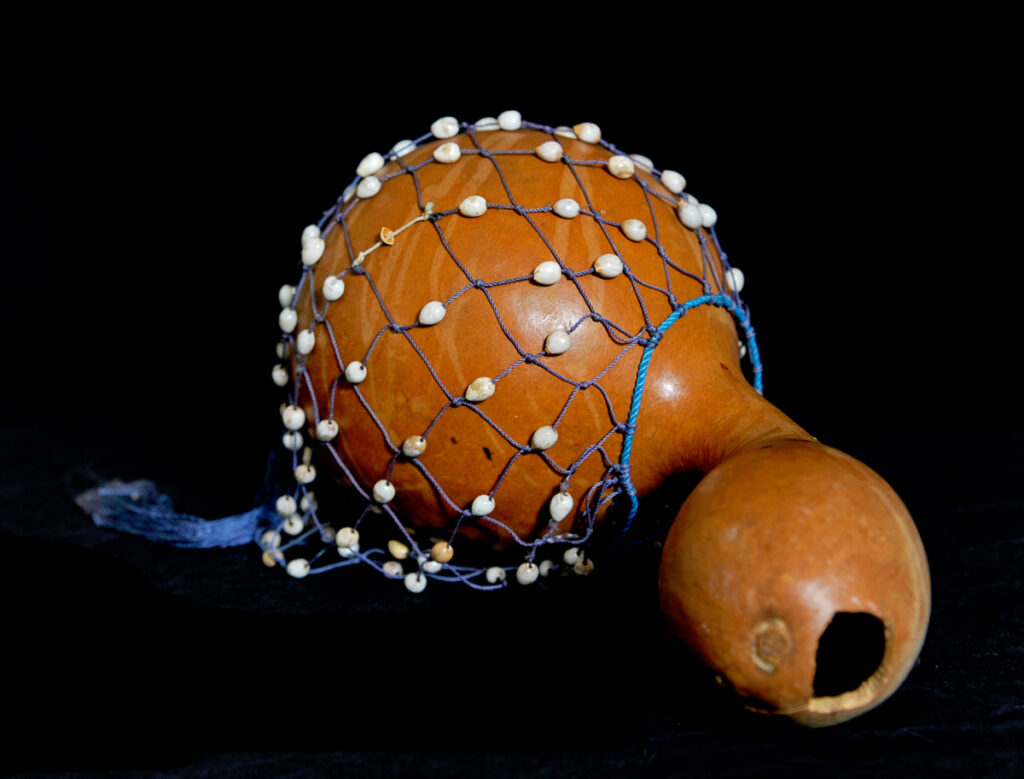 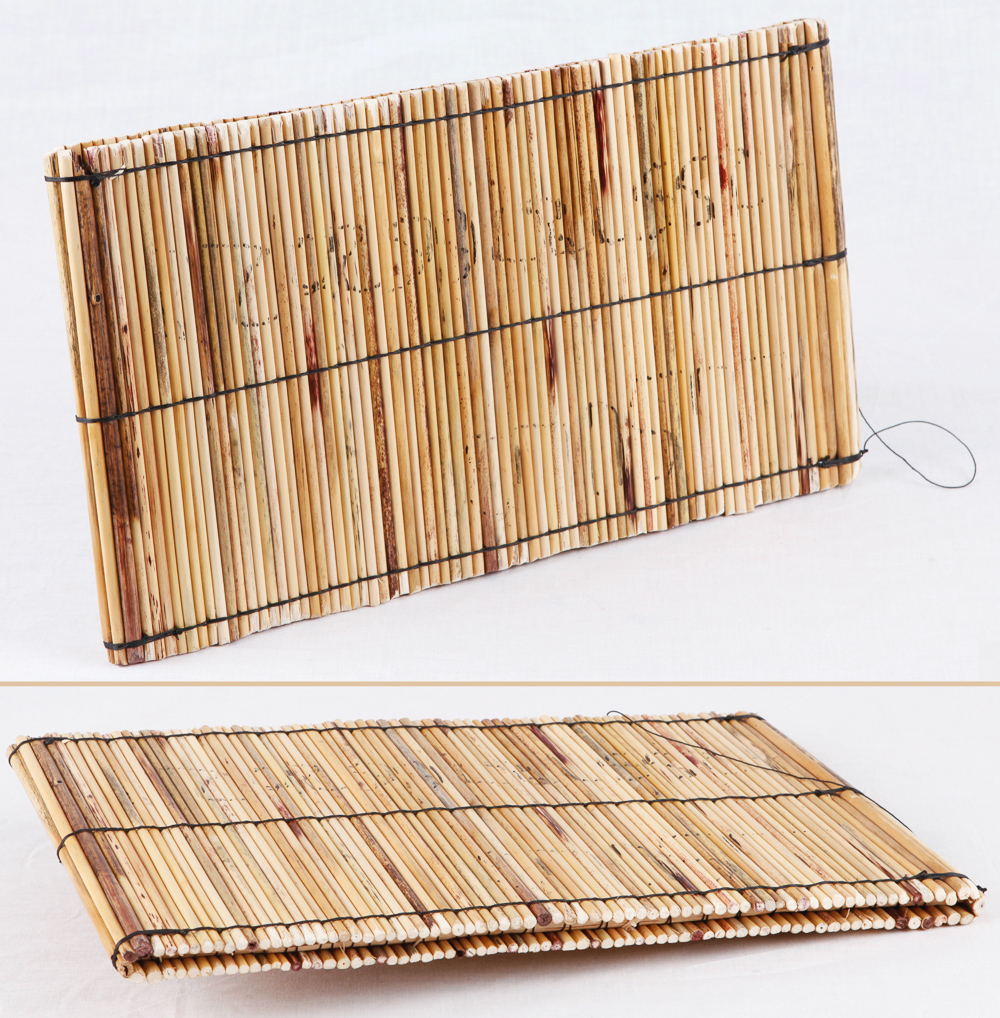 Throughout east Africa, the kayamba is a popular and distinctive form of shaken rattle. Typically played by women (though not exclusively) it is made from thin dried reeds of grass tied together into mats or rafts. Traditionally, kayamba were made seasonally from dried stalks after harvest. Two rafts are fixed together, separated by thin wooden walls around the edge, to form a shallow box about the size of an A4 sheet of paper. Collections of seeds or small pebbles are trapped inside. The kayamba is held in both hands and shaken side to side to produce a soft rainfall sound. Some players also strike the surface with their thumbs for an added percussive effect. The coastal Bajuni people of Somalia and Kenya make a kayamba from the quills of the African crested porcupine (Hystrix cristata). The continent’s largest rodent, it quivers its long quills to create a loud whirring buzz to warn off potential predators, so there’s a curious mirroring with its quills being used to make the kayamba rattle. 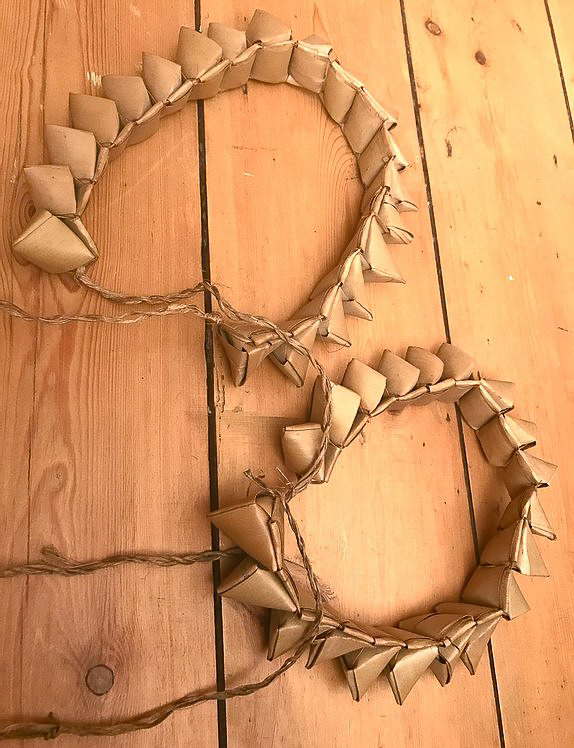 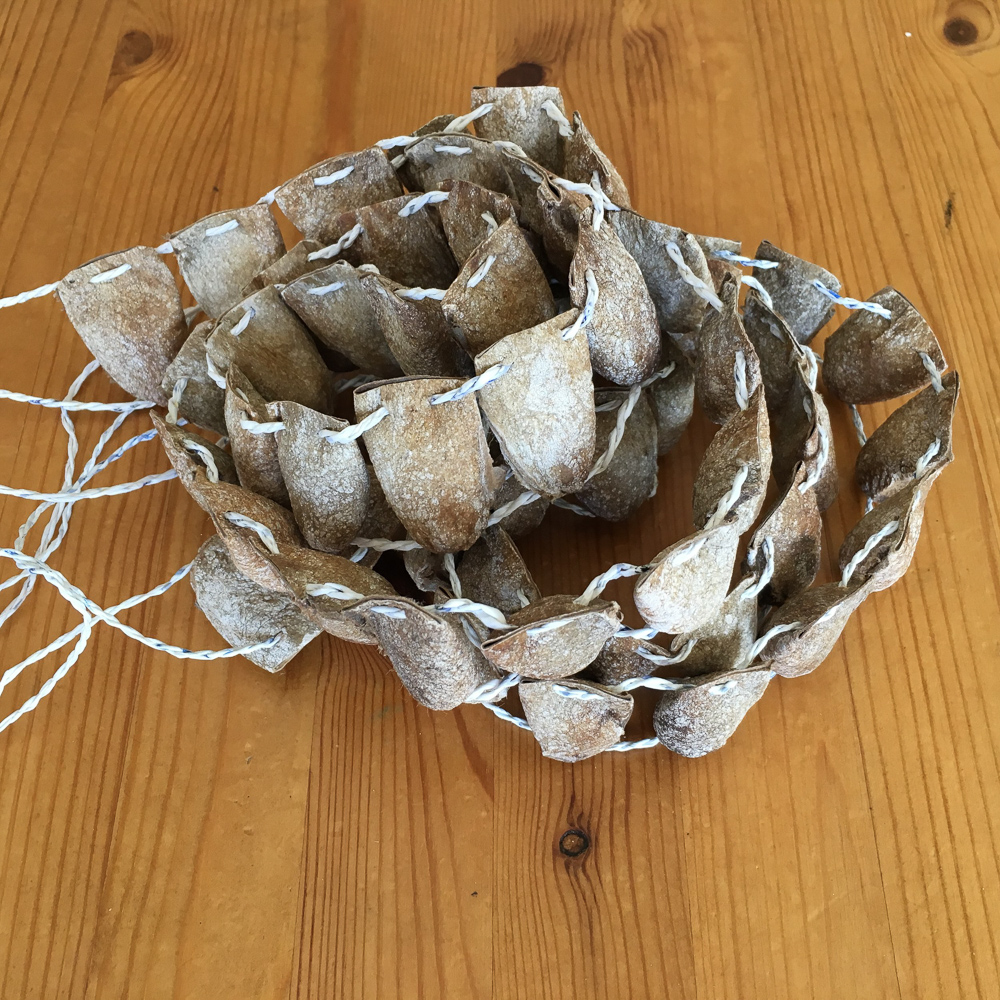 Matlhao – traditional form of leg rattles made from  moth cocoons filled with seeds, Botswana. via tasteofsoutrhernafrica.com

The Giriama and other peoples of the east African coast make body-worn rattles from palm fronds woven together into chains of small boxes each containing seeds. In some sub-Saharan traditional medicine practices, people convalescing after illness are given a fowa, a small rattle made of a woven palm leaf box with a segment of healing plant root inside. The sound of the rattle is believed to assist in getting well. 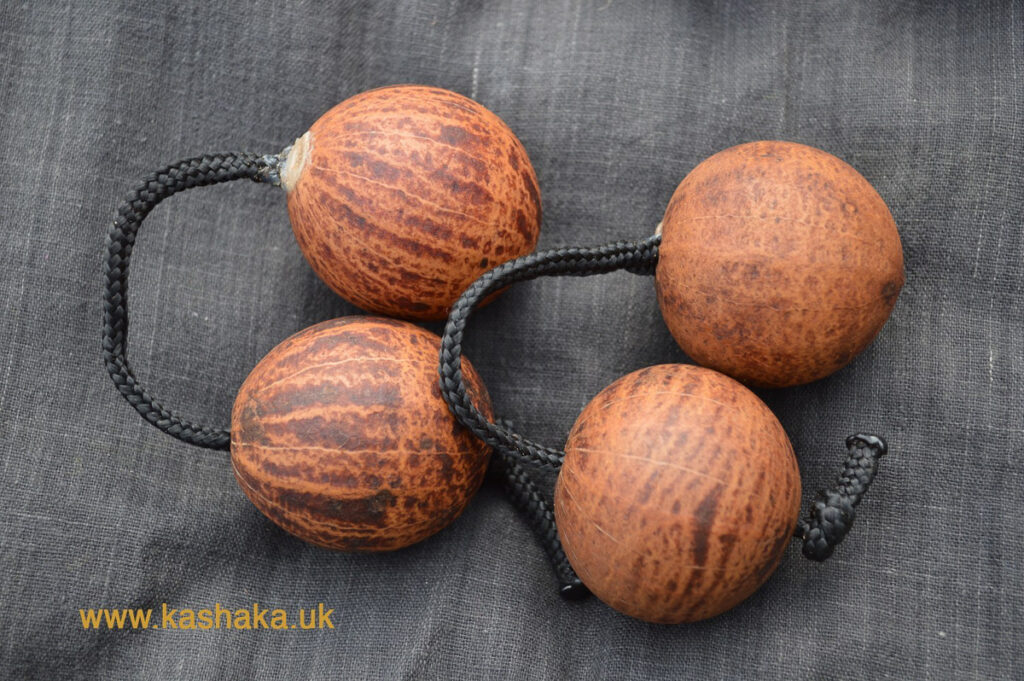 Asalato is a Ghanaian name for a fascinating handheld shaker-rattle, with many other names across Africa, made from the dried spherical seed pods of the tree Oncoba spinosa, about the size of an egg, with loose hota seeds inside. A pair of pods are connected with a short length of rope. One pod is held in the palm and the connecting rope passed between first and middle fingers to place the other pod “outside” the hand. This pod is flipped back and forth so that it clacks against the palm-held pod. With both hands playing together, combinations of shakes and clacks are manipulated to generate complex rhythms with a strange acousmatic effect. Skilled players find inventive ways to extend the sonic potential of the instrument by hitting pods against other objects and surfaces (bottles, pots, walls, doors), or clacking the pods in front of their open mouth as a resonating chamber. Different shapes of the open mouth create different musical notes.

These are only a very few of the rattles and shakers used to generate the ostinati that shape time into the crucial rhythmic frameworks underpinning African lifeways. Music is immaterial but incredibly powerful and affective, carried in the mind as memory, in the heart as emotional catalyst and in the body as haptic resource. It is at the core of our human identities, carries our histories, soothes our troubles, motivates our actions, connects us with ancestors, and amplifies our spiritual beliefs. The multifarious musics and infinitely variable instruments of Africa continue to evolve, adapt, influence and excite the lived experience of humanity throughout the world. Viva music! Viva song! Viva dance! Viva Africa!

This recording of around 40 Ghanaian men, women, teenagers and children in ambulatory musical ritual serves well to reveal the powerful spatial sonic field generated by a procession of voices and instruments grouped in type, performing tradition into presence. The sequence is: male voices, female voices, three sizes of fontomfrom drums, gankogui iron bells and axatse shakers. Members of the ritual ensemble experience different sonic emphasis within the tightly woven, culturally specific sound-mesh (especially perhaps the young women carrying the heavy loudly beaten drums on their heads). The sound-field variation is made apparent as the videographer shifts her position. The lead group of male dancers seem to be propelled forward by the rhythmic and choral energies generated behind them. But a quieter sacral energy also pulls them forward, ahead of the entire procession a female elder quietly, ceremonially, libates the dusty earth.

78rpm recording made by Hugh Tracey of Giriama singers accompanied by kayamba.