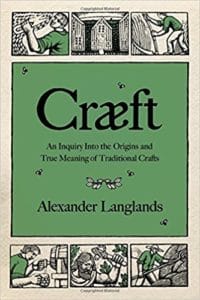 I recently came across an essay with the intriguing title, The Stick Is an Unsung Hero of Human Evolution: Stone’s silent sister in the archaeological record by a medieval archaeologist, Alexander Langlands.

It proved a gripping read. Langland sets the scene dramatically with the English Ronnie O’Sullivan’s uncanny snooker frame in 1997. But rather than focusing on the talent of the player, he turns our gaze around to consider his implement, the stick. His point is that we have overlooked the importance of the stick in the evolution of human technology, mostly because it has not been preserved as well as stone tools. Langland demonstrates this himself by attempting to cut down a tree with a handmade stone axe blade, only to realise how important is the piece of wood it would have been attached to. He then turns to the golf club as a way of understanding the critical role of hafting in human development.

Langland’s approach reminded me of Lisa Hilli’s essay about reconstructing the midi necklace of her Tolai ancestors. Sometimes, the only way to truly know a museum object is to try and make it yourself. This direct personal experience helps you understand much better the place of the object in the life of its original users.

But he has a different story to Hilli. The essay on the stick is taken from Langland’s latest book, Cræft: An Inquiry Into the Origins and True Meaning of Traditional Crafts. He uses the old English spelling of  “cræft” to locate its origins in the time of King Alfred the Great in ninth-century England when it was associated with virtue. Langland critiques the way that later in history, in the nineteenth century, the word “crafty” acquired a negative quality associated with deviousness. For him, this is indicative of the way techniques were considered errant if they were outside the mechanical formal knowledge of the industrial era. As a result, “We don’t have cræft in our lives any more.” We just push buttons. Langlands offers a vision of “paleo” craft as a healthy alternative.

Langland traces his craft critique of modernity in a direct line from Ruskin and Morris. But whereas these forebears looked elsewhere in Europe, like Italy and Japan, Langland roots his sense of craft firmly in English soil. That’s understandable. Langland has developed his public profile on the BBC Historic Farms series, including Victorian Farm, Edwardian Farm and Tales from the Green Valley. Langland’s is a Brexit concept of craft, by contrast with other recent writers, especially the more trans-Atlantic Richard Sennett.

That said, Cræft is an important book that is worth reading for the engaging way Langland applies his archaeological expertise. But we should take it with a grain of salt, or perhaps coconut water. In our part of the world, we should look more to stories like Lisa Hilli’s that add a cultural dimension to the project of reconstruction. Her story offers not just a critique of the mechanical and digital eras, but also towards the process of “preserving” the past that was destroyed through colonisation.

Either way, both Langland and Hilli are important reminders that “the past is in front of us”.