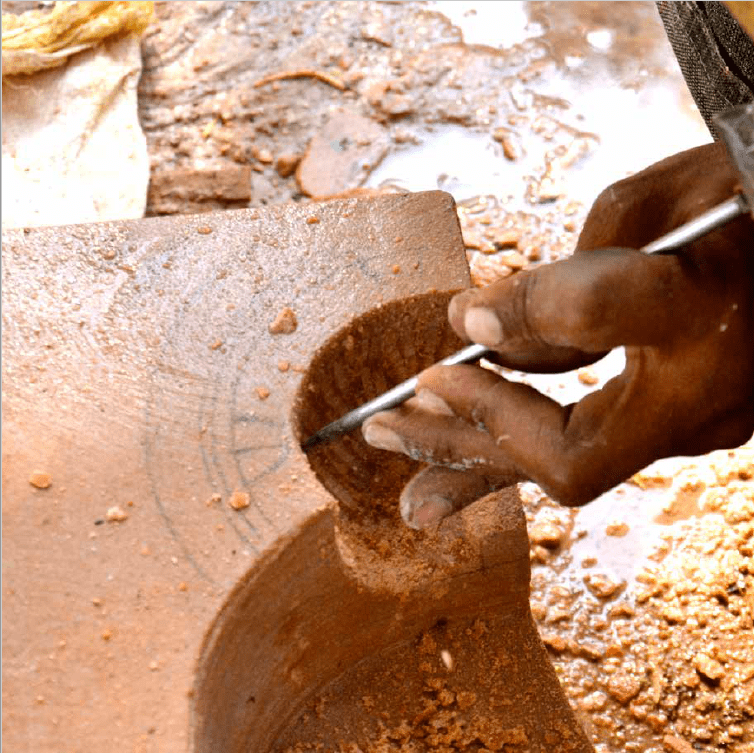 For many years. Rishav Jain has been researching the contribution of craft practice to interior architecture in India. While most attention is given to the object as the product of craft processes, in India there is a living tradition of craft skills in the fashioning of interior spaces. The repertoire of skills that can be applied to the built environment includes a variety of techniques involving materials like wood, stone, clay, bamboo, textiles and paintings. Finally, this research is now available in a handsome publication, Crafts in Interior Architecture: India, 1990 onwards.

As well as documenting outstanding examples of crafts in Indian buildings, Jain offers a conceptual framework for understanding the value of the handmade in architecture. This includes a fascinating exposition of the traditional Indian concept of kalaa, which combines craft, art, skill and technique. He also introduces some of the key concepts in English craft theory, such as “worksmanship of risk”, to consider the critical role of the handmade in the architectural process. This theoretical foundation offers an alternative to the fashional appeal of handmade as a nostalgia for a lost past.

From this foundation, Jain fashioned a methodology for contemporary architecture that involves five modes: Continuation, Standardisation, Apposition, Translation and Denotation. While the book is a wonderful overview of notable past architecture, it also offers guidelines to future practice as well.

Today where many architects are trying to plunge into the modern phenomenon of building and construction, there are still a few people, who are striving for the tried and tested methods of construction and its principles which have remained to be of use and worthy till date. “To say that craftsmanship was the strength of our earlier architecture may be true. But then what is craftsmanship – is it to exactly what our forefathers did? Craft has to evolve. If craft evolves, the focus also shifts. The criteria for craftsmanship also changes. So with the changing times, if everything changes, craft has also to change. The relevance of craftsmanship also changes.” The approach is largely characterized and influenced with the idea of change, where it is believed that with time one has to evolve, as mentioned by Uttam Chand. There is a derivation of new language in such approaches where the craft may or may not remain but the language is considerably different, there is no antecedent or precedent which is referred to except for the craftsmanship and the inherent values in them. Such positions/ approaches avoid the literal quotation or copy of the stylistic elements handed down from the eclectic tradition.

Such positions started coming into practice when new schools of architecture were established in India after independence. It was then that the discussions on the traditions the vernacular architecture and such issues started being raised at various levels. These models are strongly influenced by the practitioners’ personal lifestyles and various influences over a number of years. One cannot forget to mention the contribution of architects like Laurie Baker and Nari Gandhi who initiated a whole movement where building using the local material techniques and skills not only became a style statement but also provided clients functional and economical spaces. The practice of these architects was a derivative of the craft traditions. One of the earliest references of such approach would be the works of Nari Gandhi in 1960s where, ‘patronized by Mumbai’s rich, he built several deftly handcrafted and extremely unusual homes for them in the surrounding country.’2 The most influential architect who inspired many other architects to work with his philosophy was Laurie Baker. His works were characterized by the flexibility in design intentions and a freedom to experiment where the final outcome was governed by the construction process, the reflection of craftsmanship. Both these architects never claimed to have worked with crafts, or they have never been mentioned in the references of literature on craft to be accelerators for increased integration of craft in the built forms. But all the buildings which they produced were totally in harmony with crafts. The idea of craftsmanship was at its zenith when both these architects built various buildings across India. This inspired many other young architects of the region who followed the same design vocabulary.

They believed in the conservation of energy and minimum wastage and insisted on the natural techniques in handling the problems of climate. They preferred natural materials over the processed and were firm believers that the techniques should involve manual processes rather than mechanized ones relying on industrial products. Laurie Baker was known to be one of the few architects in the contemporary India who over the years modified his architecture to best suit the requirements of common man with the in- depth understanding of the problems. They did not go ahead and replicate what was existing neither were they redesigning the elements used in traditional architecture, but instead they derived a new language which emerged out of the associations with material and craftspeople while working on style. Following this was a huge number of young practitioners who started their practices on very similar lines, basing them on the same methodology and approach employed by many such architects. The architectural practices of Gerard Da Cunha can often be viewed in this light, as he largely focuses on the craft skills and the embodied knowledge but at the same time does not get trapped by its visual imagery. His building Nrityagram and Taj Kuteeram in Bangalore portray his extensive knowledge of materials and the idea of working on site hands on with the craftspeople helping to develop a new language. There is an extensive use of crafts and craftspeople yet there are no visual illusions or separate surface articulations which have been done. Every detail has been fixed with the stone masonry and other construction materials; even the furniture has been in-built integrating the furniture into the structure. Gerard believes, “Indian contemporary architecture must take this into account and use its strength, which is craft and labour, as a medium to express our contemporary approach.”3 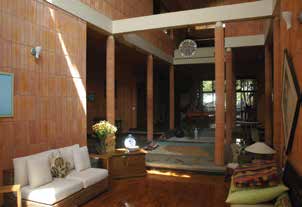 The C. R. Simha’s residence and Satish Gupta’s residence in Bangalore by Jaisim are elaborations of explorations that could be done within single material – terracotta. He complements terracotta using other natural materials like stone, thatch and wood. In both of these residences the elaboration of what a material could do with direct involvement of hand was amongst the few examples of craftsmanship in those times. They have executed a huge number of projects where the craft skills and the knowledge of the craftspeople are used to achieve the final output. And interestingly a craftsperson is involved in various decision making process from the initial level of conception. One of the important observations of his projects is that there is no replication which is being done, but the integration of craft is done so well in the design that there is no boundary seen between craft and design. Such projects follow simply the idea of uniqueness which is directly based on the foundations of craft in which no two objects were alike; each of it had a personal touch; being made by the hands of different people.

There is a requirement of immense effort for such attitudes and approaches, as there is a lot of local resistance among the clients to integrate such approaches within their projects. Uma Devi’s residence by Chitra Vishwanath uses various techniques of construction with mud to achieve the final design. The ceilings have been made inbuilt using small diyas made of terracotta, and many places the broken and left over pieces were utilized creating patterns on ceilings. This required a good amount of effort to convince the client. She mentions that how difficult it was to explain the possibilities of the material Mud. She shares her views saying “we had to show them what can be done with such materials, our own residences and offices became a mock up for them to understand what could be achieved and with subtlety, it was then and now, we have been working continuously.” 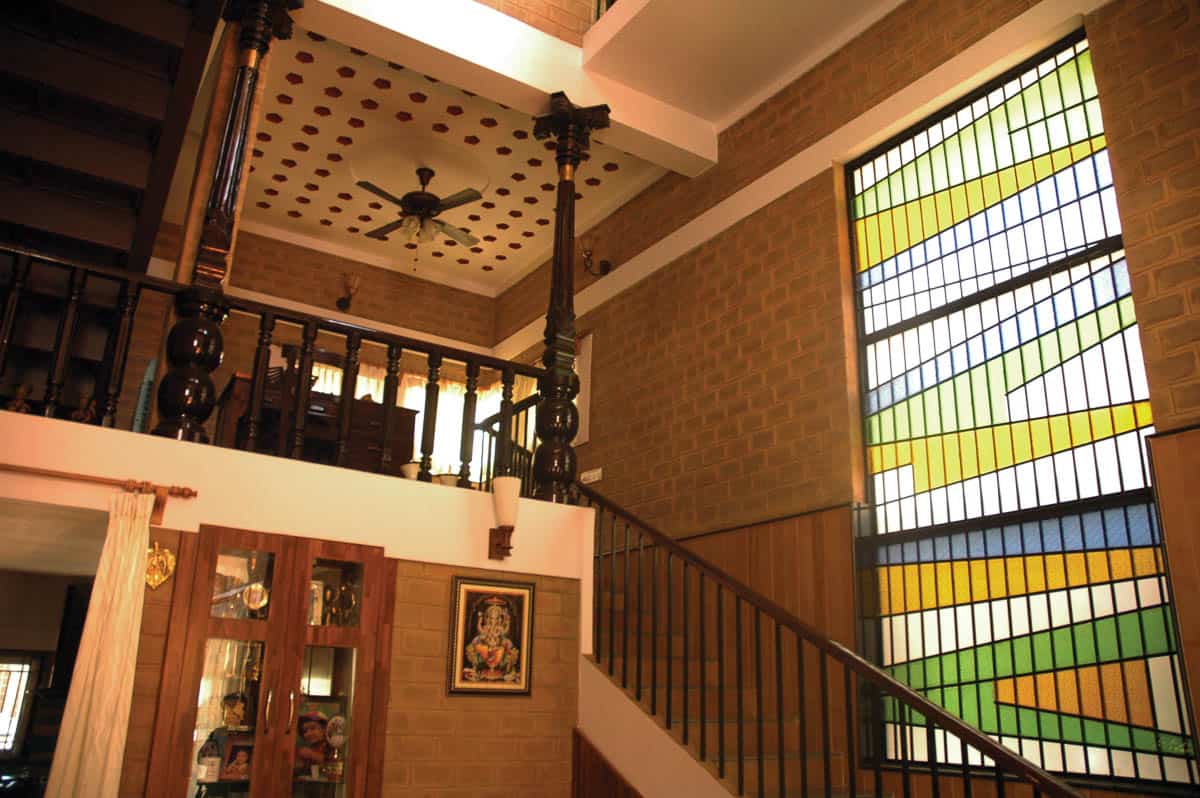 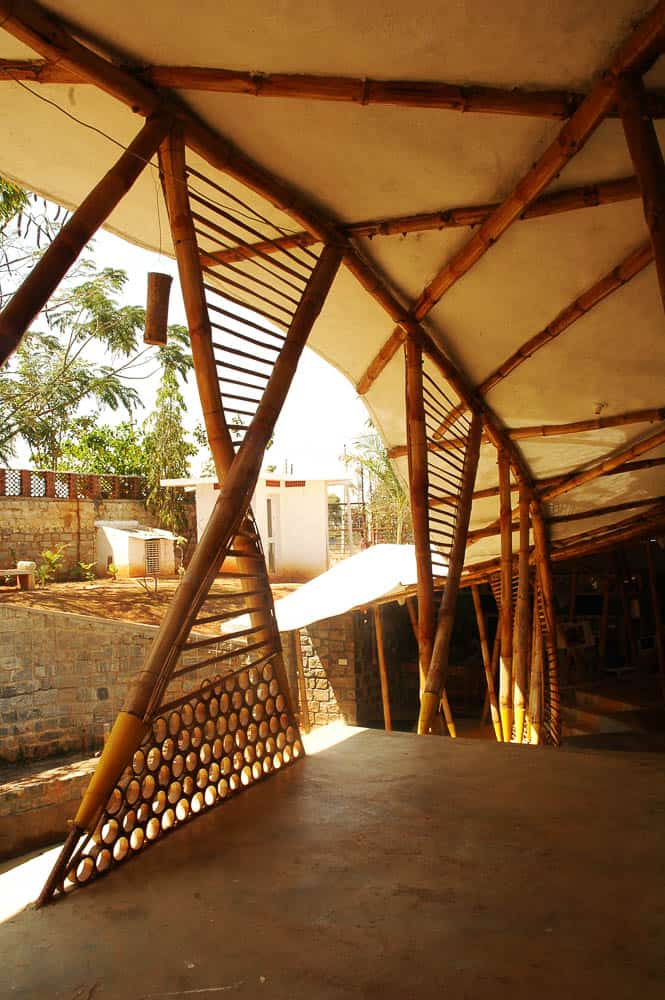 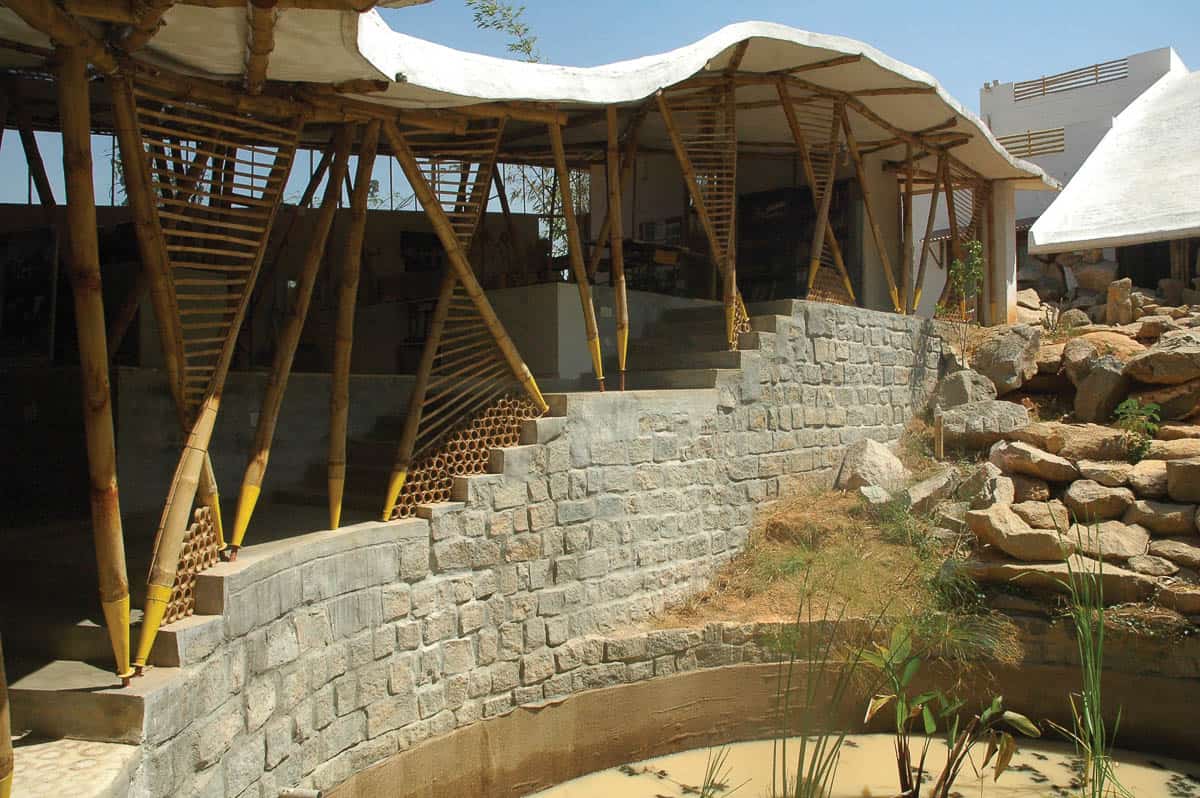 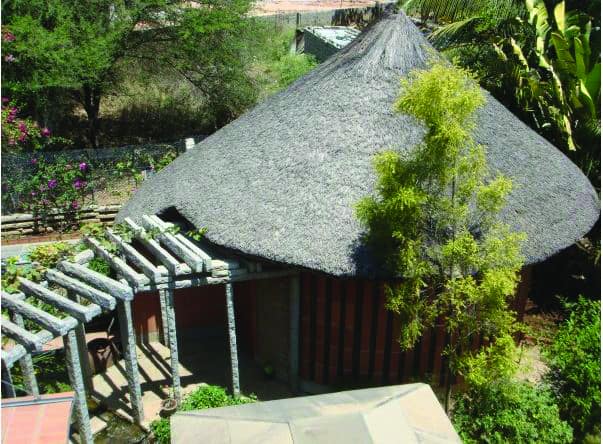 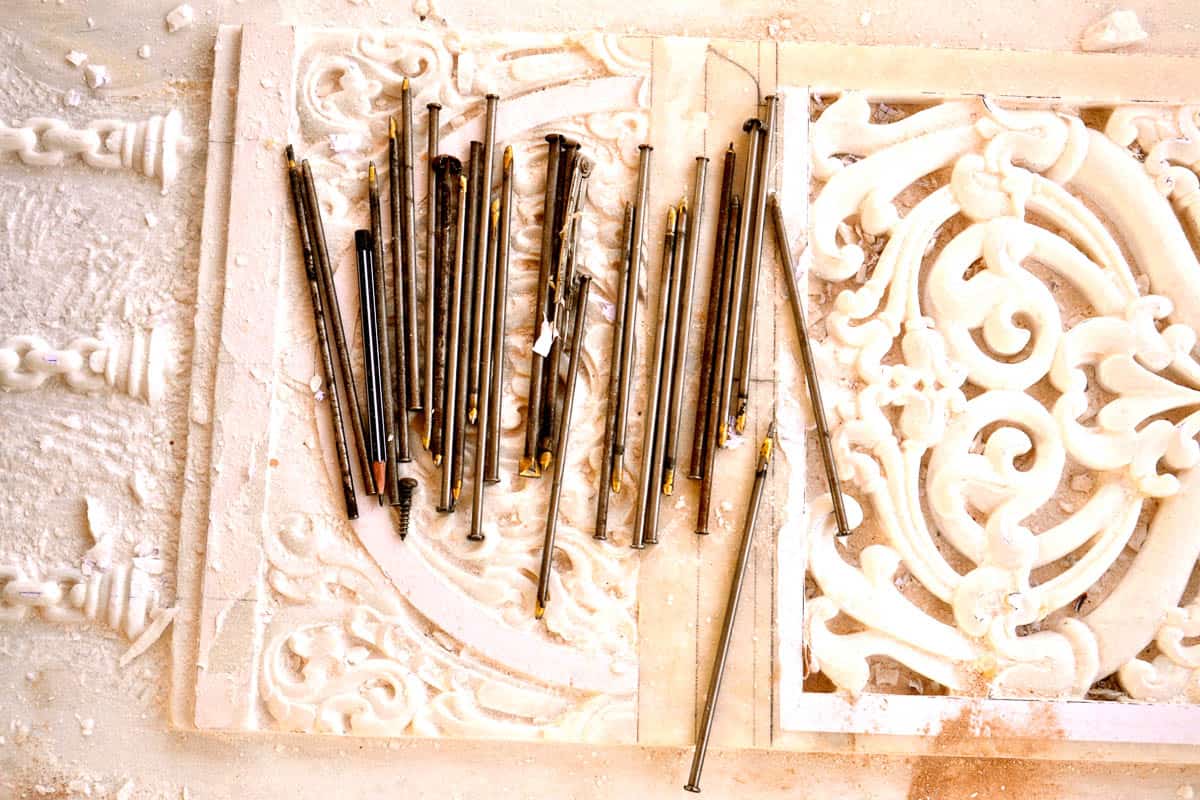 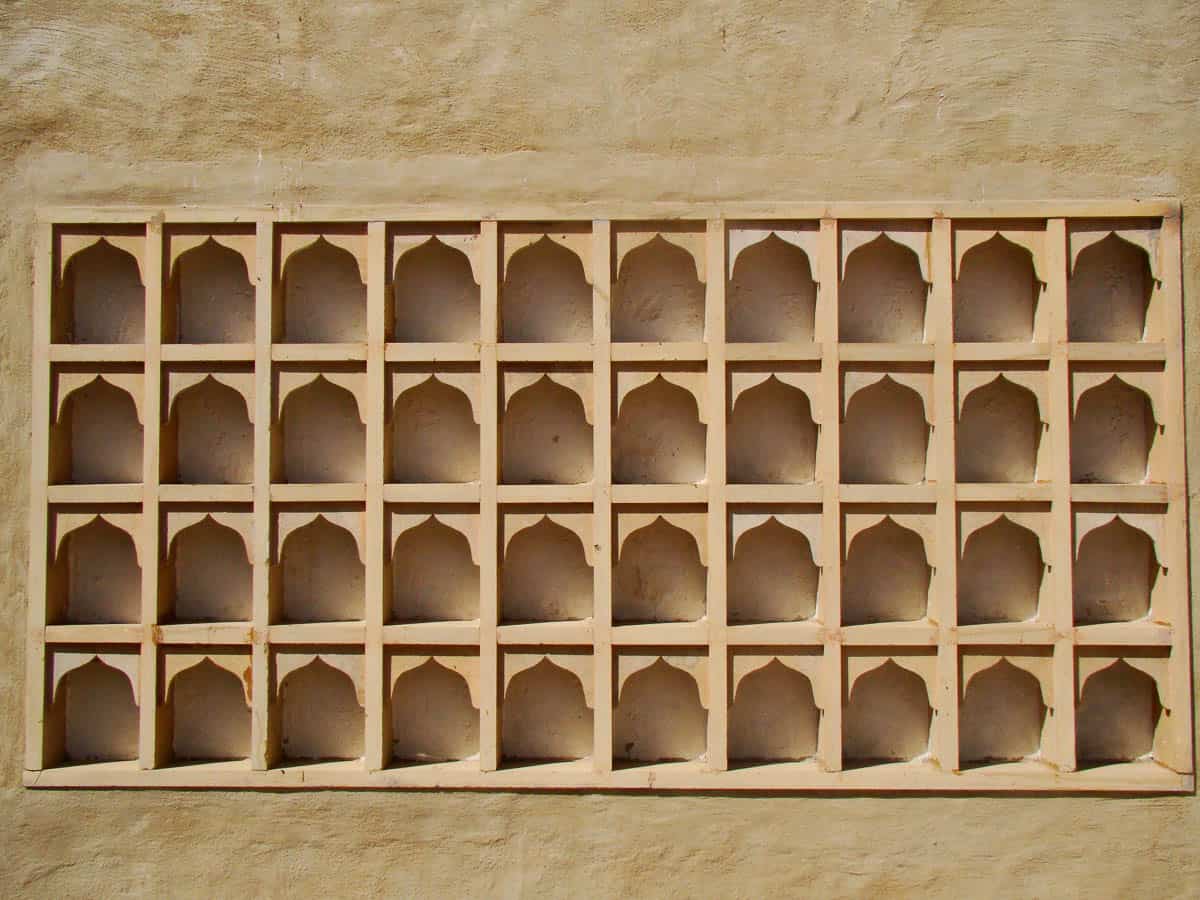 Bamboo symphony in Bangalore by Neelam Manjunath takes bamboo craft to another level. The office space used by the architect herself becomes a live model space for people to understand the possibilities of building with this material. Each detail has been worked out within the material by a joint collaboration of the architect and few master craftspeople. The walls, the roof, the furniture, the flooring etc. all have been worked out using bamboo. This is a completely new development of bamboo as a material and its craft where this project shows what all could be the possibility of building with bamboo as one of the prime materials of construction. Also the idea of sustainability is referred to here, where the architect elaborates how the use of bamboo has helped to reduce many hazards which a modern construction material is bringing today. Also with the employment of many craftspeople around the time of construction helped them to develop something new. Gopal Bhai who worked with the architect on this project mentions, “It was a very inspiring project exploring what bamboo could do, and experimenting with knowledge of both. Now that we have completed it I am getting many more projects through madam.”

You can also see this lecture on crafts in interior architecture by Rishav Jain:

Rishav Jain completed his Master’s in Interior Architecture and Design with specialization in Craft and Technology from Faculty of Design, CEPT University, Ahmedabad with a Gold Medal and a Best Research Award for his Post Graduate Research Thesis. He also has to his credit a Gold Medal and Academic Excellence Award for his Bachelor in Design (Interiors) from Guru Nanak Dev University Amritsar. He has been a contributor to various national and international journals, magazines, blogs and forums through his research papers, articles and essays. Currently, he works as an Assistant Professor at Faculty of Design, CEPT University, Ahmedabad. He is also a Research Expert with Design Innovation and Craft Resource Centre (DICRC), CEPT University where he is involved in research, innovation & development, education & training and resource building & dissemination. His research areas largely focus on various approaches in interior architecture as related to space making crafts and the changing role of craftspeople and their position in the society.