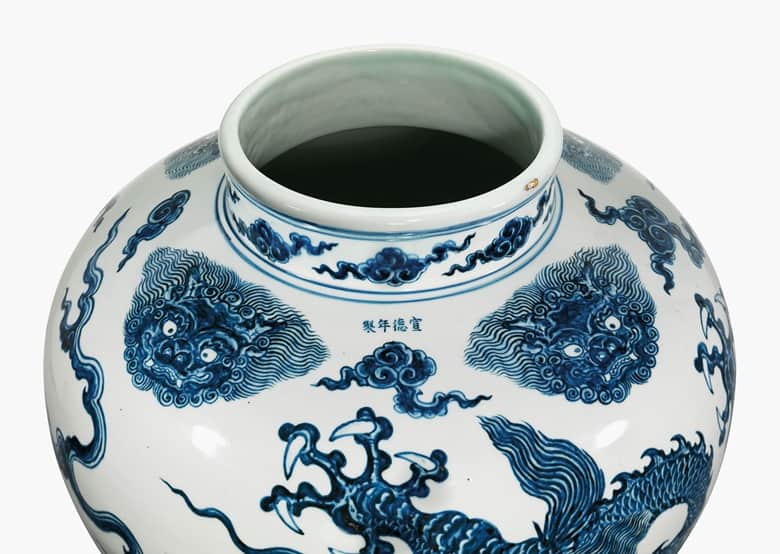 Detail from large blue and white ‘dragon’ jar, guan. Xuande four-character mark in underglaze blue and of the period (1426-1435)

Garland #15 is scheduled for June 2019 and will explore creative dialogue with the past in contemporary China and beyond. Recent years have seen a concerted revival of traditional crafts. This combines with a nation that is rapidly growing its economy and technological capacities. How do we connect the ancient and the futuristic?

This issue will include a focus on the key stories, such as the mythical creatures phoenix and dragon. We will use these theme to look at the way mythical creatures are the source of creative inspiration in other countries of the Indo-Pacific. The dragon relates not only to the mythical beings of other cultures, such as the rainbow serpent in Australia, it also has contemporary meaning as a symbol of climate change. Dragons in many cultures are associated with changing weather, such as rain, wind and storms. Today it gives meaning to the greater uncertainty of climate we experience thanks to man-made global warming.

The online exhibition will be a space for our network to participate in this theme. The call in China #15 is for works that connect ancient cultures to today. This can be in the form of decoration or design. Emphasis is on ways of living with the stories, values and rituals of ancient culture and how we interpret this in contemporary life. You can submit works using this form here. Works are due by 13 May.