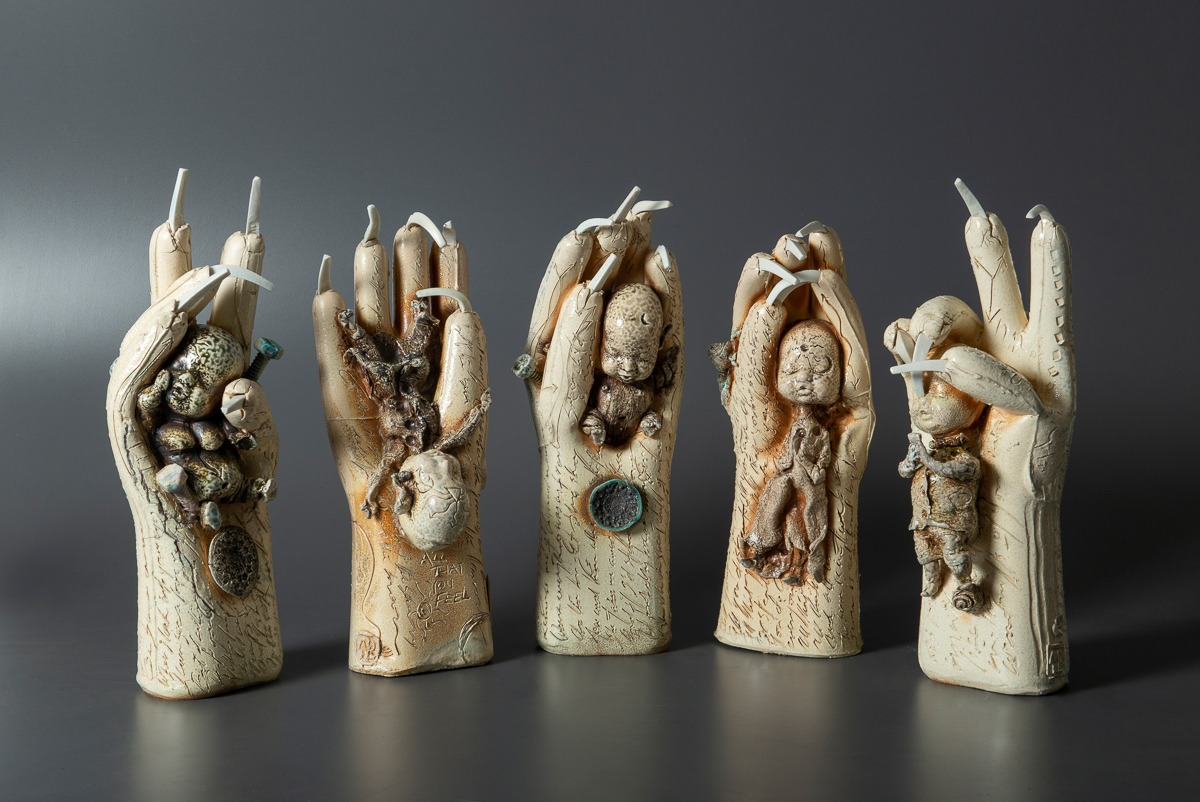 Adil Writer presents a series of figures that evoke the fraught condition of love for the Parsi community specifically and India generally.

A veritable potboiler of multiple faiths, languages & cultures, this land of mine has always embraced diversity. Notwithstanding a few hiccups currently, mother India has derived her strength from tolerance. Her soul resides in pluralism and tolerance which has become an essential part of the country after centuries of assimilation of ideas.

Take my example…. my forefathers escaped religious persecution in the then Persia and reached Indian shores in the early 8th? Century…. all it took was a glass of milk and a spoonful of sugar for us to be welcomed to the shore (see below)!

Today my community of parsis is a dying tribe. We number some sixty thousand in the world, less in numbers than what are termed “endangered tribes” in the Amazon basin. Taking a cue from this I designed a ceramic tableau “Endangered Species” at a residency in China, which is now a part of the museum collection in Fuping. The plinths on the figurines proclaim their very parsi names and vibe (Kerawala, Screwala, Freny Fatakra….) As in, they could be anyone residing in my Dadar Parsi Colony in Bombay! 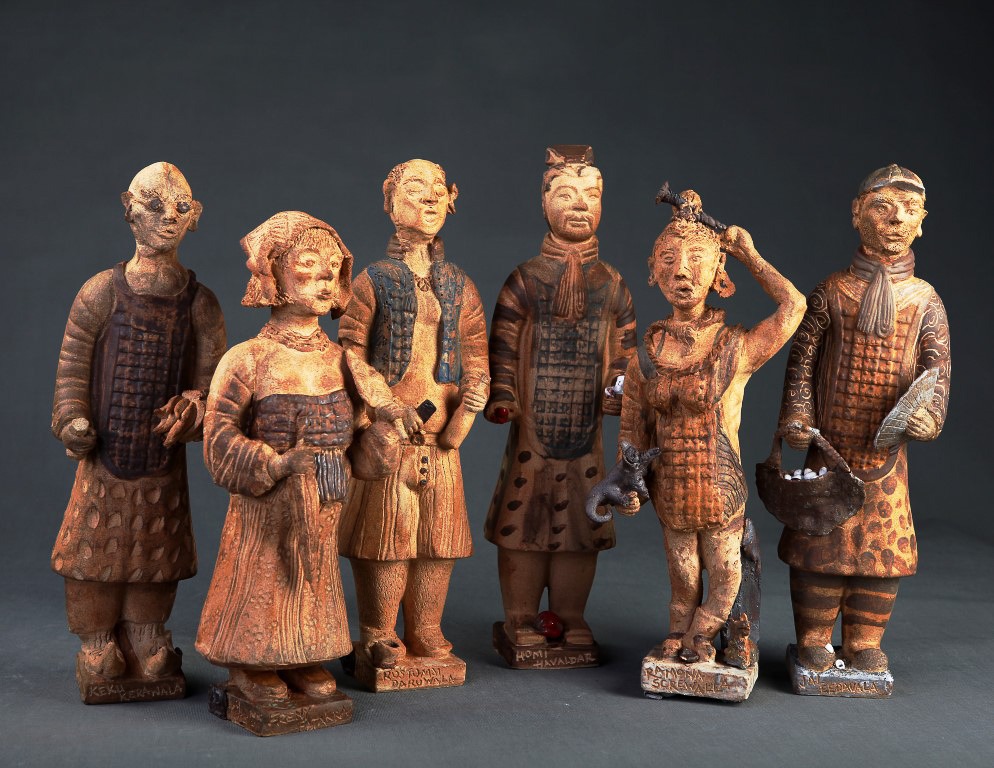 The dwindling of our numbers is mostly due to man-made rules where the children of those who marry out of the community, are not considered parsis…. but wait! This is a patriarchal community hence children of parsi fathers get direct access, and those of parsi mothers? A delete button! If this is not quickly resolved, (and there has been a lot of talk about this as expected), we will be extinct soon! Love and marry outside the community and you will be ostracized!

But seriously, “What’s love got to do with it? What’s love but a second-hand emotion?”!! Look at the terror spewed by the self-righteous, self-appointed moral brigade in India, the so-called “right-wing fringe outfits” They create havoc on the streets on Valentine’s Day, claiming it to be a western concept and “against Indian culture”! Err???? Showing a bit of oxytocinic love in public spaces… against Indian culture? 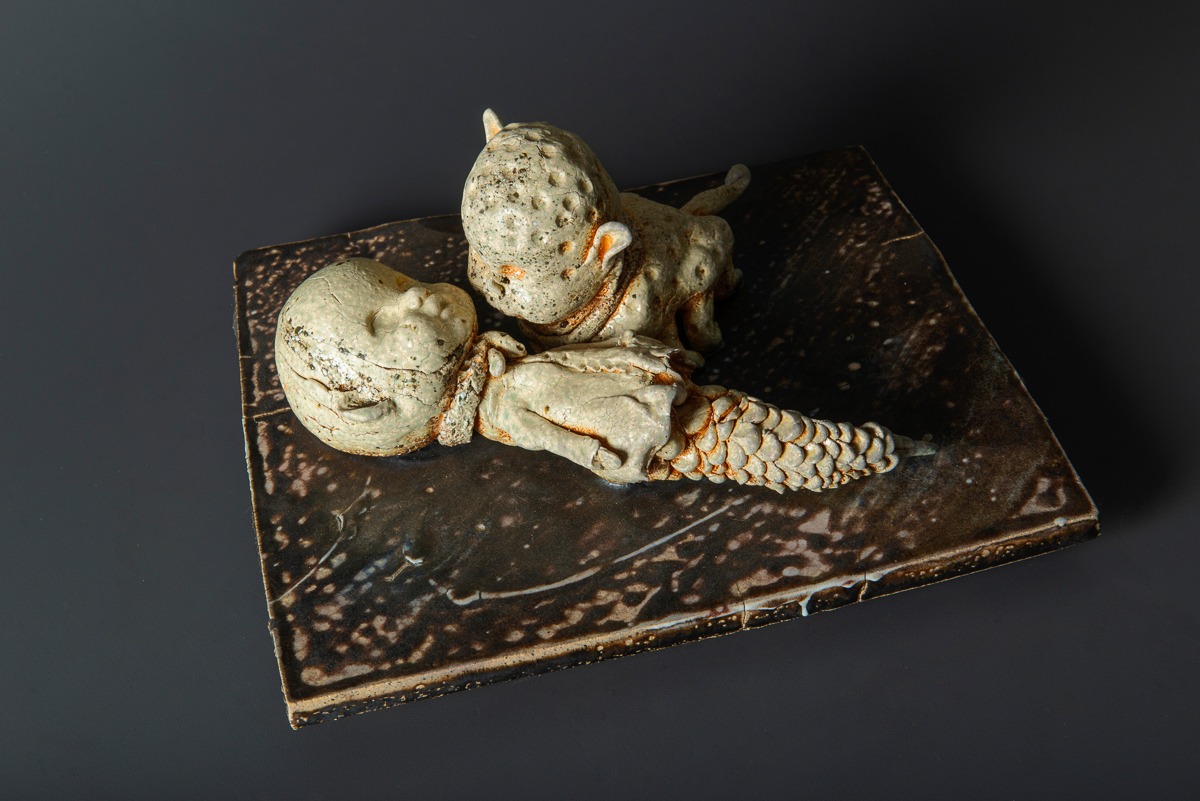 In a land where a beautiful blue godhead serenaded several gopis in spite of being smitten by a particular one? In a land which brought out the first manual as an ode to making love? Do other religions from other countries have anything close to the Kamasutra? Couples are trashed on footpaths and parks for showing affection in public places on the 14th of February by the very people who enjoy watching gyrating, over-the-top innuendo-laden Bollywood songs which would never survive #metoo guidelines.

My current sculptural series titled “Sweet Dreams” deals with memories of ceramic miniatures and images of Botticellian delicateness. In the jumble of Indian mythologies, we have what may be Krishna-esque cherubic mischief and a wink-wink factor. My figurines seem to know that they want what you feel is anything but predictable. Walking sharply on edges of macabre and Horror-chic, one may call them a grotesque reflection of our own seemingly innocent selves. 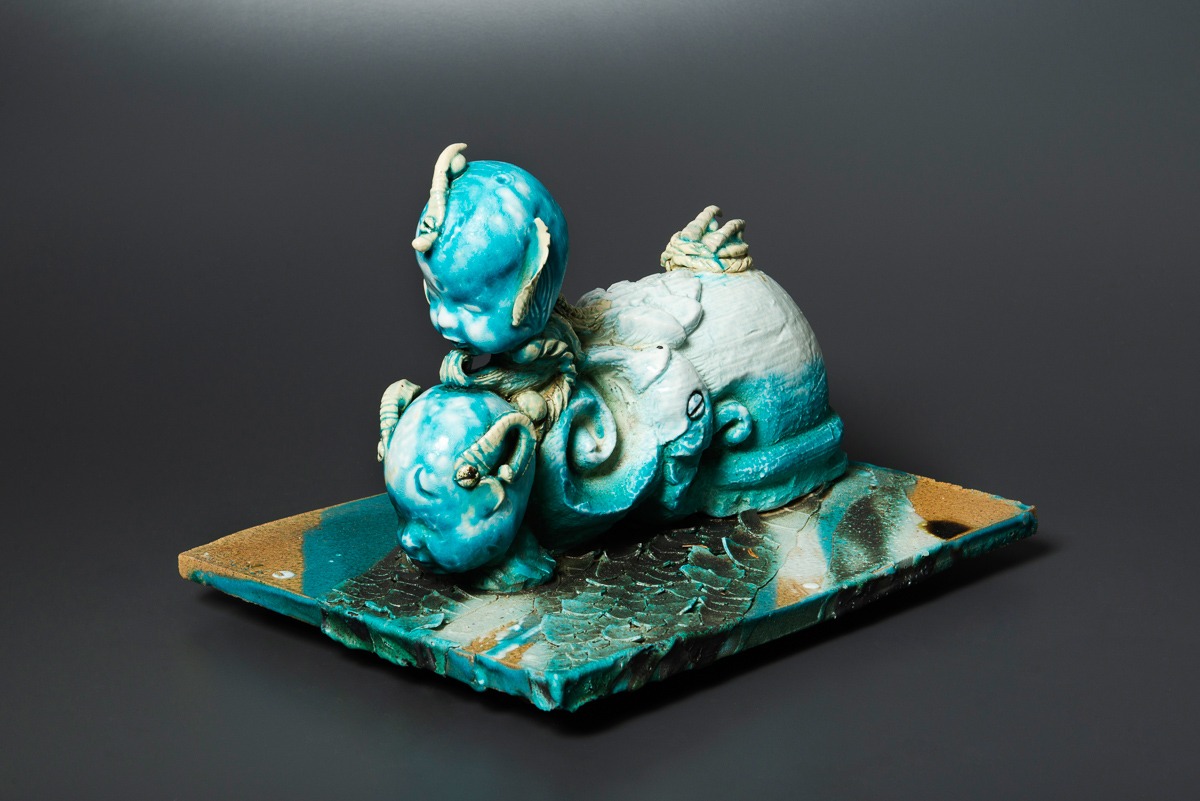 They project hope and gumption in their garbled forms, which despite appearing mangled are eagerly telling their stories—unfiltered, uncensored. They declare, “Yes, I could have been a forgotten, smooth skinned angel on your mantelpiece …but I decided to do the unforeseen, the unusual, to live my truth and now even if you hide me in a corner, you won’t stop thinking of me.” 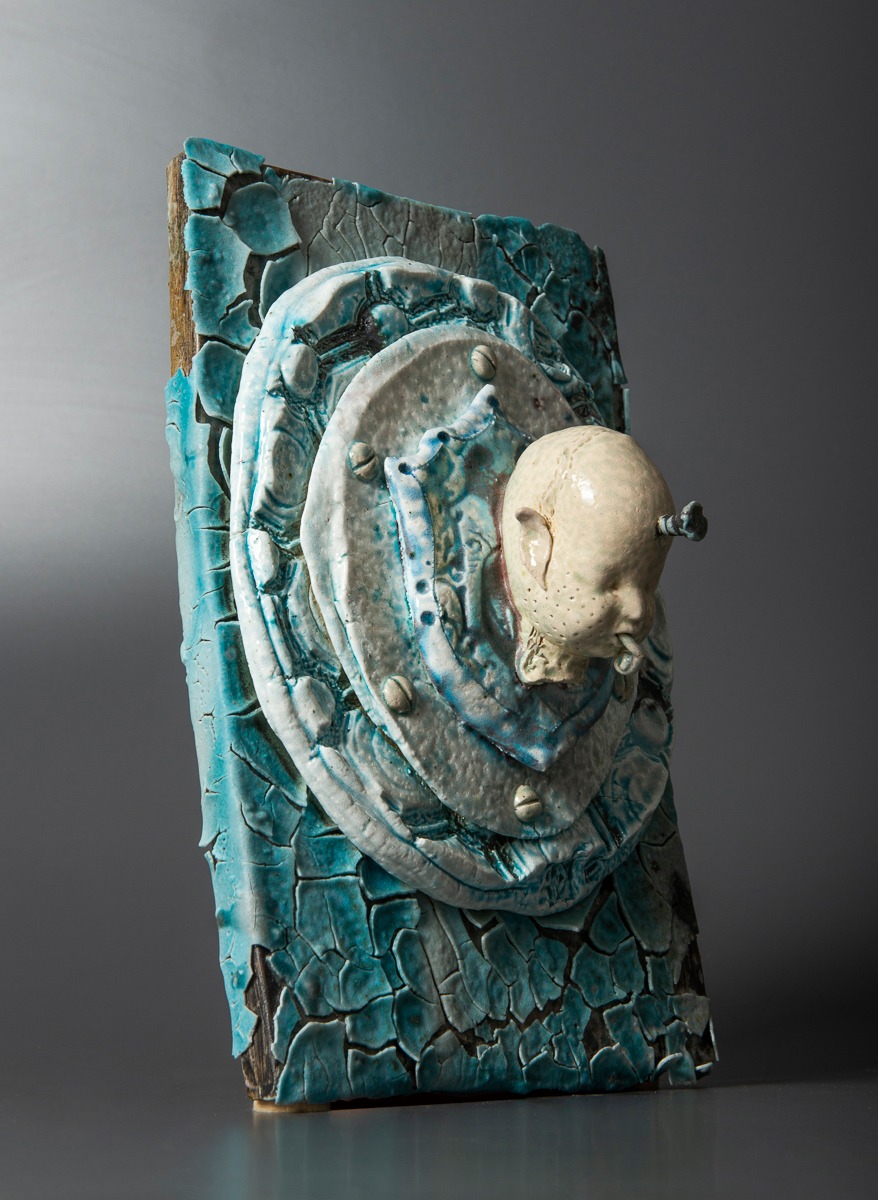 Often dismissed as a clash of cultures, the caste system in India had been exploited by the colonists to the max in nearly two hundred years of the British Raj. That was the real partition of India… far more acute than the partition of India that happened when we got our independence. One of the most significant yet paradoxical changes in the caste system in contemporary India is how it has become invisible for the upper echelons of modern society. That, or how it is shoved under tattered linoleum or Italian marble floors in various strata of Indian society. The changed climate in India’s famously argumentative democracy has come into sharp focus since the lotus bloomed to office in 2014. However, with the advent of television and social media, things are decidedly changing. The logic being, if an interfaith union is ok on telly, it may be, may be ok in real life too. 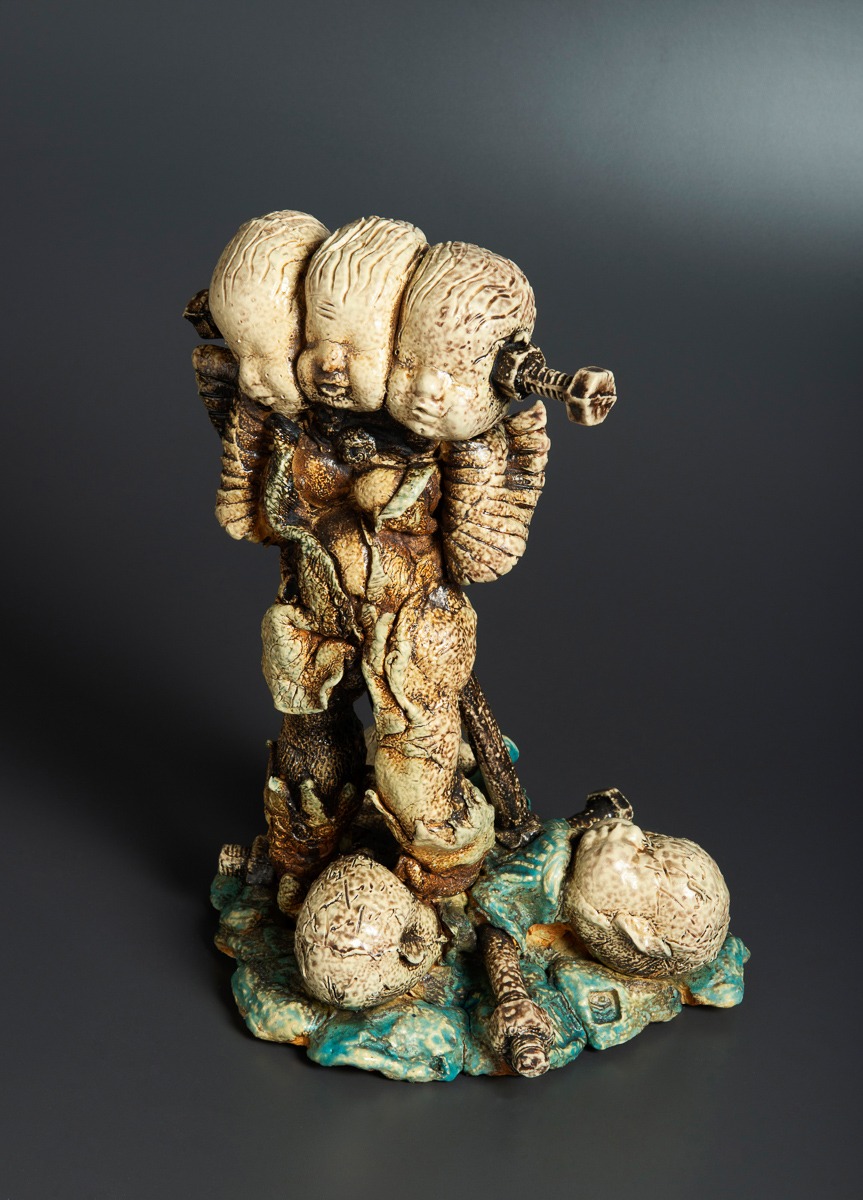 Since the current ruling party won the populist vote, there has been a marked increase in the feeling that space for liberal discussions and overall common-sense is becoming narrower. Although I pride myself on saying that our constitution is based on the idea of a liberal, tolerant society as envisioned by India’s founding fathers, lynching, assassinations and open threats at pubic forums, in the open media glare, are becoming the norm that any peace-loving Indian cannot fathom. Hindu assertiveness and “western cleansing” are openly supported by the powers that be; its no longer a simple Valentines Day uprising.

“I think you let the child inside you grow misshapen, trapped under the weight of the everyday”, someone observed looking at this piece, ‘Hey Ram!’ “It is reminiscent of Frankenstein’s Adam, that beautiful misunderstood creature no one wanted, but didn’t realise they needed.” 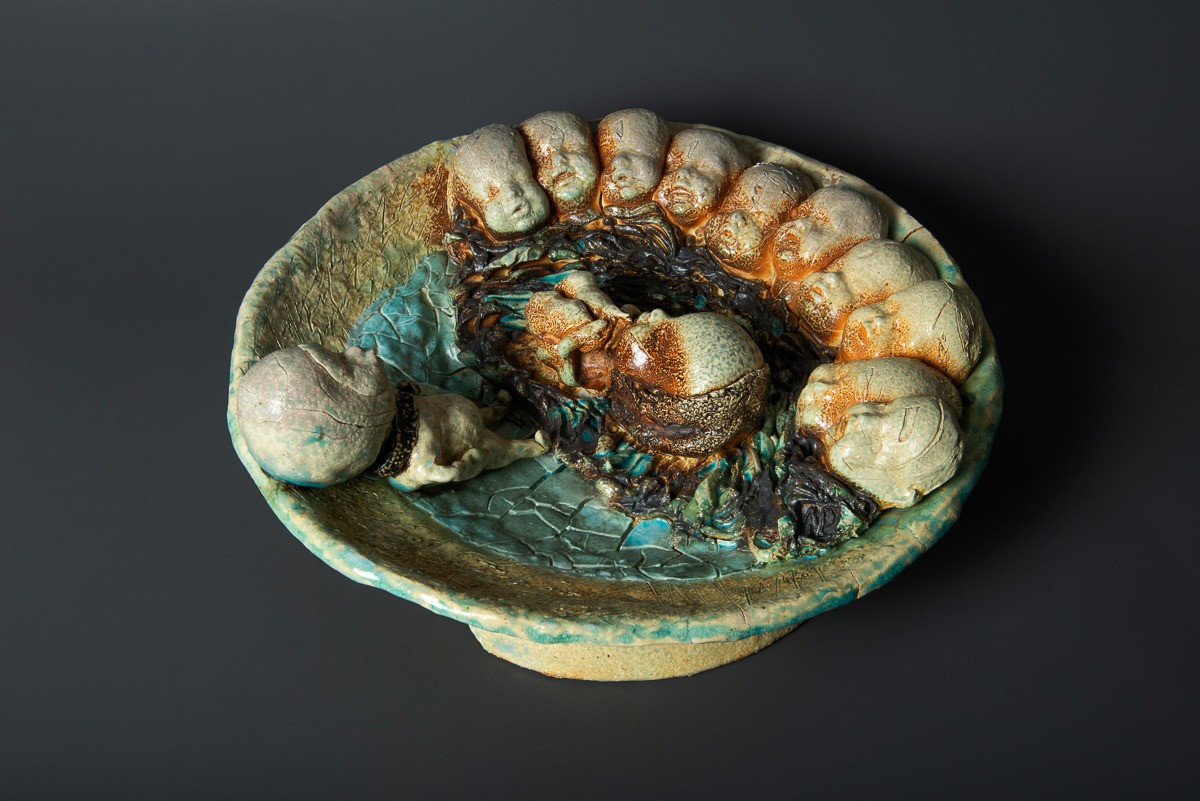 As a very vocal Indian politico / ex-diplomat, Shashi Tharoor, at his eloquent best, says, “We (in India) cannot simultaneously sell ourselves to the world as a land of pluralism, tolerance and Gandhianism, while promoting intolerance, communal hatred and minority insecurity within the country. It is time the government learned they cannot promote ‘Make in India’ abroad while condoning the propagation of ‘Hate in India’ at home.”

It is very clear; India’s pluralistic ethos is at stake here; love truly has nothing to do with it.

I would like to take you on a journey into the culture, and nuances of the Parsi Cuisine of India. I would like to present to you the famous Story of Parsi immigration (into India) and their welcome with Sugar in the Milk. One of the oldest stories of Sugar and Milk in Parsis (Parsi / Parsee Zoroastrians) folklore, comes from the time when they came over from Persia (modern-day land of Iraq and Iran and other countries) to save themselves and their religious faith. They landed in Sanjan a port in the Indian State of Gujarat. The king, Jadhav Rana, was the ruler of the land and a good one. The language of Indians and Persians was different, so to welcome the strangers and communicate that the land was already filled with people to the brim, he sent them a full glass of milk. The Zoroastrian priests immediately got the message and since they were peace-loving religious people, they wanted to send back a message that they would make the land and community richer and more prosperous by their good values, knowledge and hard work. The Parsis added sugar to the glass of milk. The King Jadhav Rana was so impressed with this gesture that he granted them asylum and welcomed them with gifts and helped them settle in the new land of India. Parsis thus settled and assimilated, blended in India like sugar in the milk. See full story here.

Adil Writer lives in Auroville. You can learn more about him at www.adilwriter.com.

All photos by Marco Saroldi, Auroville.

Does the wanting monster whisper to you?
Iran ✿ Poetry in limbo
India Craft Week live 1-3 May
The next Taj Mahal?
Narrative design - Learnings from India
In font we trust - Bangalore Mirror
Taller Grulla ✿ The forest at hand
Issue #5 - @India