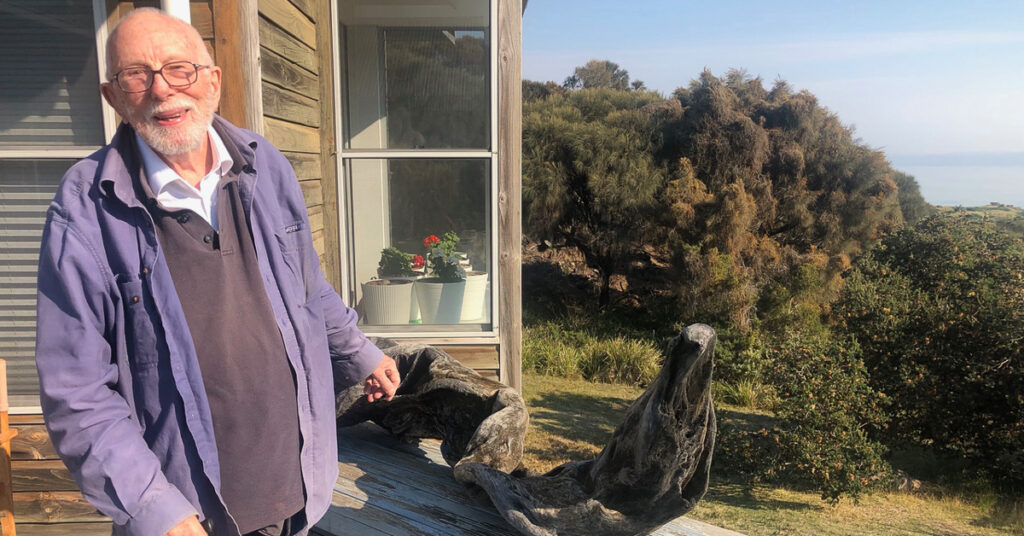 Daniel Thomas in his home at 90; photo: Andrew Andersons

Stephanie Radok reviews a collection of writings by the doyen of Australian art history, Daniel Thomas.

As an object, the book Recent Past by Daniel Thomas is like that Australian archetype/icon the Magic Pudding. What is remembered about the Pudding (apart from its frowning bad temper and I have never seen Daniel Thomas frown) is that it is never finished and can always supply more sustenance however many times it is eaten. It also changes from steak and kidney to plum, savoury to sweet or vice versa, as required.

So too with Recent Past the hardcover of which also comes in various colourways – bright blue and black, ochre and bright blue, orange and black…

A curious and wonderful person, Daniel Thomas, now in his eighties, devoted his life to Australian art and, though not primarily a writer as he points out, wrote rather a lot about Australian art.

He wrote as an art critic for Sydney newspapers while a curator at the Art Gallery of New South Wales. He worked at the Australian National Gallery in Canberra and then as the Director of the Art Gallery of South Australia in Adelaide. He always wrote as a professional who engaged with art with an unswerving and generous sensibility.

An intensely useful book, Recent Past, and the contradiction in the title is very Daniel, is a selection of his writing from 1958-2020 and also contains a full bibliography of all his writing.

It represents a certain passionate trajectory through Australian art. The editors Hannah Fink and Steven Miller would have had a wonderful time making the book with its author. Most of the articles or essays are flanked by recent lively 2020 commentary from Thomas placing and annotating, adjusting and clarifying. And enriching. How many people get to do that? I can also feel his pleasure in choosing double page spreads of certain images to tell a certain story, to place emphasis where he believes it should be placed. This is art history in the making.

And Thomas’ voice – precise, thoughtful, informed, yes a touch pedantic but always full of pleasure, beams through the book.

His induction into art began as a child when Dunera boy and Bauhaus star Ludwig Hirschfeld-Mack taught him at Geelong Grammar. Also as a child he had an early introduction to Aboriginal art in Central Australia when he met Albert Namatjira. And in the first hang of the National Gallery in Canberra back in 1982 he made sure to juxtapose Margaret Preston’s work with Arnhemland bark paintings. Recent Past includes a paper given by Thomas at a conference that was claiming that Aboriginal art had been neglected. He shows historically that indeed it had not been.

Place and people and particularity matter enormously to Thomas. There are no generalisations here but exact and joyful heartfelt insights abound. Not theory, correctness, one-upmanship or ego but materiality, presence, emotion, these are the touchstones used by Thomas in his long engagement with art. This is what brings it and the art it discusses to life.

He always advised the many curators such as Mary Eagle, Ron Radford and Ian North who worked with him to go to where artworks were made, to breathe the air, to find the place where the artist stood. “Fieldwork is more fun than library research.”

Thomas’ influence upon and accounts of Australian art are present all around us in exhibitions, collections and galleries, and especially in the 1988 blockbuster travelling exhibition and book Creating Australia which sits in a pile of really heavy art books in my lounge room.

Histories of Australian art are always controversial and perhaps will always need to be superseded. Thomas remarks that the continual publication or indeed existence of Robert Hughes’ Art of Australia is immoral. Bernard and Terry Smith’s History of Australian Painting fares better though focusing on painting is so old-fashioned. Thomas appreciated Bernard Smith’s sensibility but also recommends more recent histories by Andrew Sayers and Wally Caruana.

Another important thing that Thomas wants to say about Australian art is that the early art historical claims that early European artists like John Glover, Eugene von Guérard and WC Piguenit didn’t see the actuality of where they were is wrong. They did.

Thomas is well-known as a hero in particularly recognising and pursuing the history of Australian women artists through interviews and exhibitions. His regard for Grace Cossington Smith shines through. He admired both her work and her quiet confidence.

As it sits on my breakfast table I can cut and come again at the magic pudding of Recent Past thoughtfully encountering the mischievous delighted smile of Daniel Thomas cheerfully considering a country, its art and the light surrounding it.