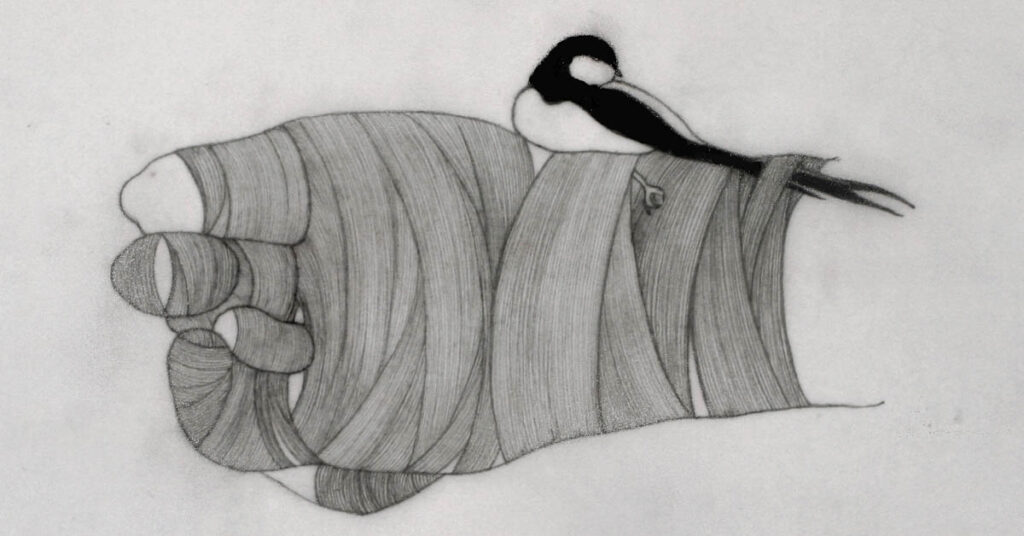 Jessica Hemmings writes about drawings by a Spanish artist that reflect a fraught violence.

In Susan Sontag’s 1978 book Illness as Metaphor, she wrote the now often-quoted passage: “Illness is the night side of life, a more onerous citizenship. Everyone who is born holds dual citizenship, in the kingdom of the well and in the kingdom of the sick.” Spanish artist David Escalona, who studied medicine as well as fine art, seems acutely attuned to this double citizenship, be it the arrival of disease, or the pain inflicted by war or domestic violence.

Mientras Dormías [While You Were Sleeping], Escalona’s current exhibition on view at El Centro de Arte Contemporáneo (CAC), Málaga through 4 December, comprises drawings, sculpture and a collaboration with Chantal Maillard of illustrations for her book of poems La Herida en la Lengua [The Wound in the Tongue]. The bulk of the exhibition is Vendados [Bandaged] (2013), a series of thirty drawings on tracing paper with graphite pencil installed at eye level in a continuous line around three walls of the gallery. While violence against the body is apparent throughout, the series does not invite sequential reading. Instead the actions of war, domestic abuse and surgery appear side-by-side, offering an uncomfortable reminder of the sheer ubiquity of violence in life.

On the fourth wall is a work that borrows its title from a verse by Maillard – Aprieta which could be translated as to squeeze or pull but suggestive of the trigger of a gun. Five leather cartridge belts hang packed with cartridges, as you might expect, but also white resin cast fingers. The work is distinctly unsettling. Whose lost digits are we witness to: the recipient or the perpetrator of violence? The exhibition press release refers to the work as a “metaphor for the fragile boundary between victim and executioner, and vice versa, a game established between the systems of violence and power.” While the work was created nearly a decade ago, viewing today conjures associations to Russia’s invasion and war in Ukraine and the ongoing reporting both of torture and desertion – of violence that entraps all sides.

But this is not an exhibition without hope. In Escalona’s drawings, bandages and threads play a prominent role. Wounded individuals, or in some cases several individuals, are often bound together. A heavily bandaged hand grasps a swallow. The small birds, capable of such airborne acrobatics, make a regular appearance throughout the series. At times they seem to be offering a witness to the pain endured, elsewhere perhaps an escape from bodily torment.

Escalona often creates distinct figures through the negative space around a subtle dusting of graphite that marks a clear interior. A woman stands in low-heeled shoes, head wrapped in a scarf holding the direct gaze of the viewer. Above her white calf-length skirt her torso is unclothed, leaving visible the scar of a mastectomy. In another work, three women stand with hands on each others’ shoulders. The body of the first is bound from temple to ankle in bandages that seem to have dissolved from the others. An ending, or escape, from the constant companion of pain.

In the catalogue for his 2018 exhibition Cold Fever at Künstlerhaus Bethanien in Berlin, Escalona writes: “To ‘forget oneself’ is conditio sine qua non, to vibrate, or like I usually say, to resonate, to open oneself up and to be part of the weave that forms the whole. In order to achieve that, one has to lose the limits of things, of those concepts that limit us; one has to be right on the edge of language, mumbling.”

Escalona arguably draws this edge of language in the Vendados series. If it is mumbling, it is far from indistinct. There are deeply held taboos at stake in some of these images, including compassion for the perpetrators of violence. The drawn lines that make up these drawings are incredibly delicate, but feel a good deal less about human fragility and far more about human survival – despite the ongoing suffering we bring to each other.

Jessica Hemmings is Professor of Craft at HDK-Valand, University of Gothenburg, Sweden, co-editor of the PARSE journal issue 15 violence: materiality and editor of the second edition of The Textile Reader (Bloomsbury: 2023).