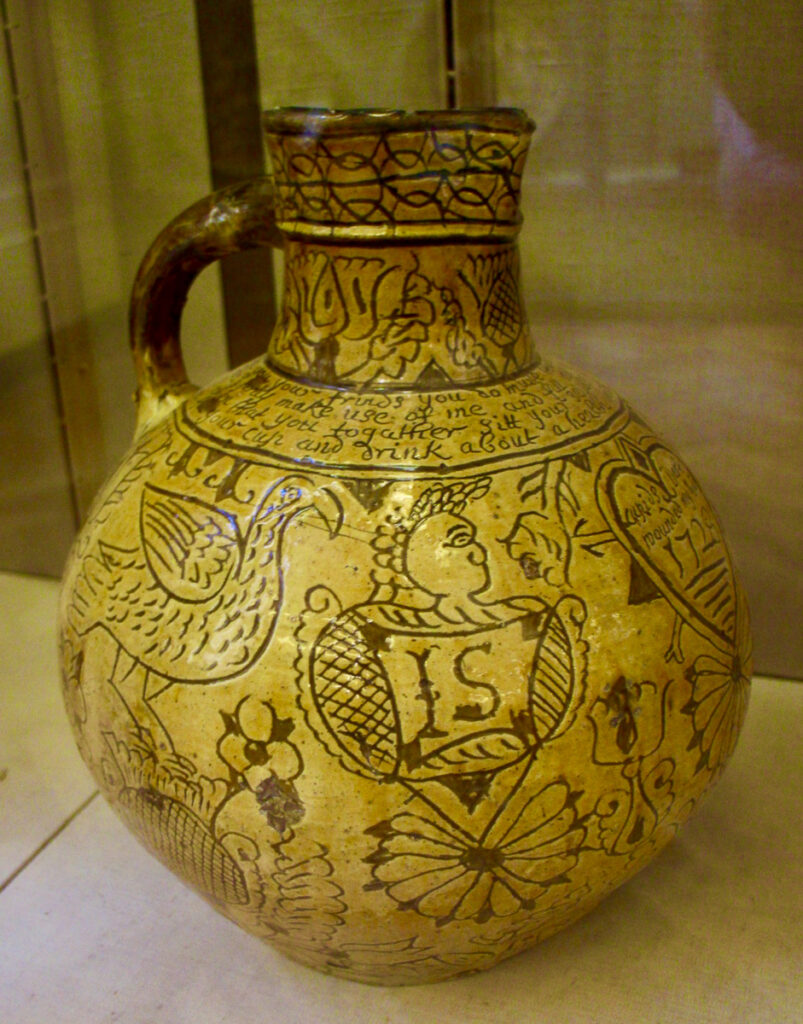 Sebastian Blackie listens to a garrulous clay jug from centuries past.

That girl was always making. Hers was clay country. Down by the brook that ran through the village of her birth she made her first pot. As a woman she could still recall the clay’s pungent river stench, its cool slipperiness, the way it changed colour from grey blue to tan as it oxidized. When the wind blew from the North she could smell the earthy flatulence of the distant brick kilns, their chimneys punctuating the horizon; beyond, a thin line of ink-black fenland lying beneath a blank unscripted sky. Her brook slowly etched its way across this unforgiving plain. It did not babble but kept its secrets close. A silent but meandering channel that moved with stealth in summer until winter floods thickened its water with gagging silt, kidnapped from another land. Errant whirlpools produced occasional stifled gurgles from the unseen deep. They puckered the speeding flatness of the water as it hurried darkly to the coast and the drowned dogger lands beyond.

My haptic knowledge was the first to go. I had opened a bag of clay and wired off a large lump as I had thousands of times before. But, what next? I stared at the bench my fingers, making incoherent marks on the fresh surface of the soft clay, waiting in vain, for instruction. I cut another lump from the bag but again I was bewildered. By that time in my life, my body had already lost some of its facility and stamina. Joints had become worn and damaged forcing me to try different ways to complete familiar tasks. I would prepare the clay on my knees so as to use less strength and more bodyweight. It worked well until I tried to stand up! Like a seized gearbox, bone, stripped of gristle, grinds on raw bone; un-lubricated sinews, stiff with age, screech in protest. But this was completely different. I was not in pain I simply could not proceed. It was as if a cog had gone missing bringing the rest of the mechanism to a standstill. I had been vandalised, deskilled, un-learnt.

Writing quickly followed. My handwriting, never fluent, became ever more disjointed. Inexplicably gs’ whose tails started ok bent backwards on themselves to become infirm qs’ while bs’ turn into dissolute ds’ that looked as if they had collapsed on the page like some toddlers tantrum refusing to pull themselves into shape. Finally the pen in the hand did not move at all. There was no meaning in these marks and I had forgotten even why I made them. I used to stare at the blank paper as if it was a rear mirror. I hope for a quick release from the terrifying chora ahead, that chaotic place where I briefly catch sight of my former, forming, self; she at the beginning of life’s journey, growing in strength and knowledge, the person I have become, returning empty to the terminus.

As I stare helpless at the bland ceiling my mind is not empty, just full of holes. Frightening blank spaces and a blur of terrifying indistinct shapes of uncertain scale and meaning; but further back it is as if a lens has been twisted. Memories are sharp and tangible, thought and feeling are as one. I can still remember something of the person I once was.

With clay her fingers could tell stories

The girl became a potter. She found her dyslexic brain, which struggled with the lofty structures of words, was fluent when giving form to lumpen, plastic clay. With clay her fingers could tell stories. With clay she started to understand the world and bring light to the dark East Anglian landscape of her childhood. Like doubting Thomas it was through her hands she began to believe, not in Jesus but in herself as she centred the clay on the spinning wheel. When she chanced to see the harvest jug it was as if a land of plenty was poring from its spout, its robust handle, like that of a spade burnished from use, gripped firm by an arm hardened by manual labor.

Its warm lead glaze flowing like honey over its rounded belly reminded her of barley ripening in the sun on plump West-country hills and the intoxicating smell of a harvested field on a warm summer’s evening. Decorated with flowers and script scratched through the creamy Devon ball clay to the russet earthenware beneath. The head of a woman and a man adorn its broad shoulders, celebrating the union of hardy farmers; this clumsy image, once drawn with the freshness of children, on a vessel that has now grown old. Battered by hard-living it is chipped and cracked from lip to foot and the slip on its belly has flaked leaving gaps in its thinking. Like some ancient pealing mirror, she reflected, it is redundant, its function left to the imagination. The thirsty workers that once filled up the fields at harvest time are also gone. They toiled and rested for a while to pour forth at the end of day. Like streams they found their way to the sea and boarded wooden vessels to take a new life in someone else’s land. Now the empty beaten jug stands in their stead, brittle testament to a bitter harvest.

Devon Harvest Jug was written in response to Feast and Fast at the Fitzwilliam Museum, Cambridge UK. The exhibition of almost 300 works from 1500-1800 demonstrated Europeans multi-facetted, historic relationship with food. The work of many famous artists such as Pieter Brueghel the younger were chosen as were the silverware and porcelain of the rich and powerful. But I was drawn to the harvest jug; firstly as a fine example of potting but also as an object that represents the anonymous stories of working-class people.

I imagined it from the point of view of someone descending into dementia as a metaphor for the way such individual histories are forgotten but also how what we now regard as historically important was, at the time, an individual experience. The Fenland landscape I describe is that of my birth and childhood, an area I returned to live in about 15 years ago. My feeling for the region’s topology is very intense so I chose to identify the protagonist as female to create a certain distance. Looking at the harvest jug I felt as if I was looking at a past and a landscape that was mine and recalled the exact opposite when walking in the bush of Western Australia. The jug, for me, represents loss. Made of earth it is the land from which the rural poor were driven to make new lives in the Americas and Australasia. 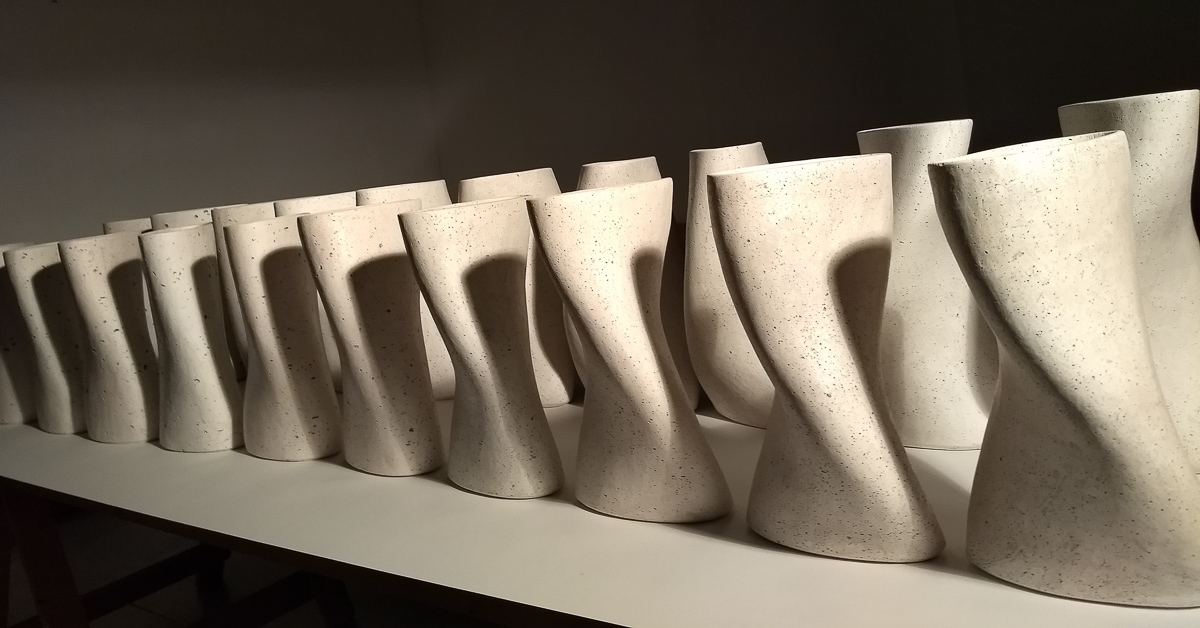 Dancing with stars: From light to dark from dark to light
Sebastian Blackie reflects on the celestial ceramics of Jane Perryman and Tom Hall writes about the accompanying soundtrack by Kevin Flanagan.