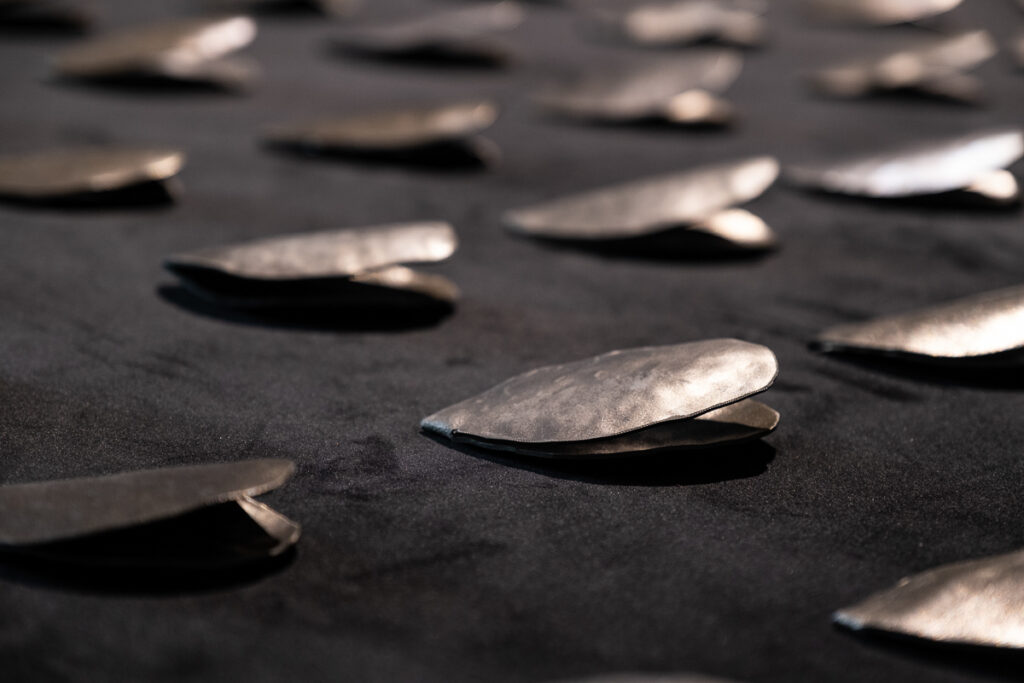 Sarah Stewart finds the work of Tasmanian jeweller Gabbee Stolp reflects the fleeting beauty that flows down the Derwent River.

A glimmer, an unexpected form: Gabbee Stolp’s jewellery catches my eye, and also my heart. Solid metal appears liquid, and I’m drawn in, fascinated. I want to touch it. She’s altered its form, and my expectation with it. Her melting down of the metal, and fixing it again, cooled in water, makes it changed from the experience. This transformation brings about a new state, whereby the liquidity of our most vital resource is captured in a lasting piece of craftwork. The language of water: it speaks to us of transformation, permutation and the course we take, finding our way from inner experience to outer expression. Artist Gabbee Stolp, from lutruwita/Tasmania, translates her perception of water into jewellery, sculpture and installation. Her work reminds us where we come from, what we carry with us, where we are going, and what we are made of.

We meet at the makers’ collective State of Flux, where she and three other artists have set up a studio in nipaluna/Hobart’s Salamanca Arts Centre. From drawers, boxes and tins Gabbee brings things: shells, fragments, fabrics, fisheye lenses (!), molluscs. Gabbee weaves these collected items into her work with a quiet reverence that honours origin and composition. Through repeated visitation to local bodies of water, through contemplation and intention, she makes work that conveys a language of water, and her meditations on it.

In the case of her jewellery, she offers the wearer a way to carry this reverence on the body, in a subtle yet direct acknowledgment of its beauty and journey into that which it has become. Earrings and pendants appear as splashes; rings are a stream around the finger. Her recent exhibition at Good Grief Studios, Derwent River: I have my mother’s eyelids, captures her fascinations via motifs of river ecology and personal pilgrimage. This body of work has seen Gabbee turn to the Derwent River in addressing her matrilineal inheritance: depositing her mother’s ashes there, repeated visits to its shores and collecting found objects chosen for their form and material significance. She gathers spent oyster shells from nearby oyster farms, and is captivated by the coalescing togetherness of interspecial bonding: mussel and oyster shells calcified together. It’s a sculpture, entire. 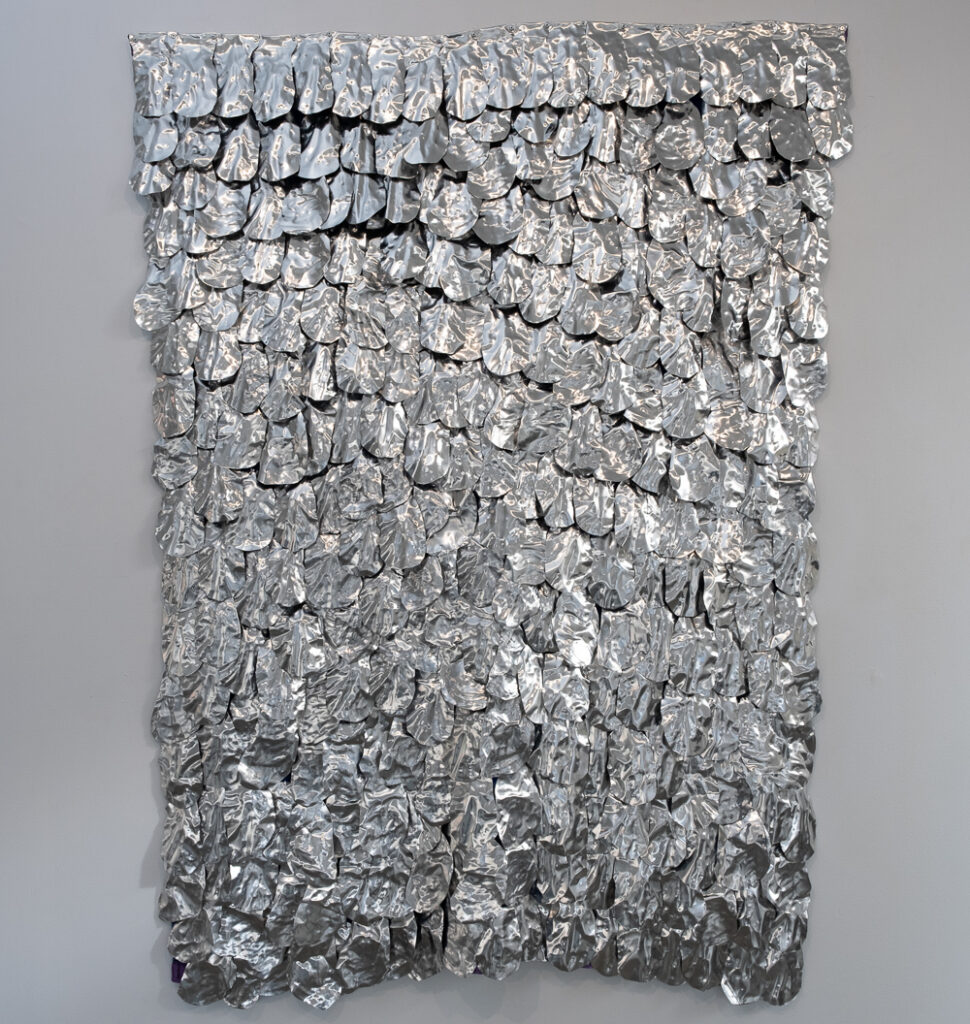 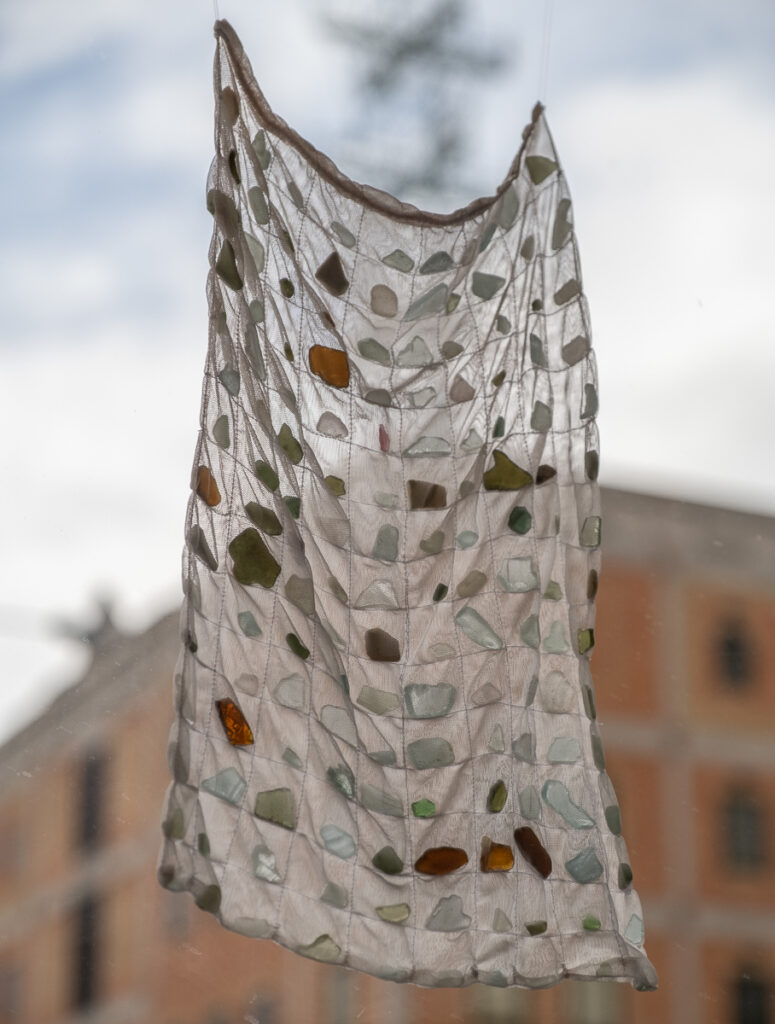 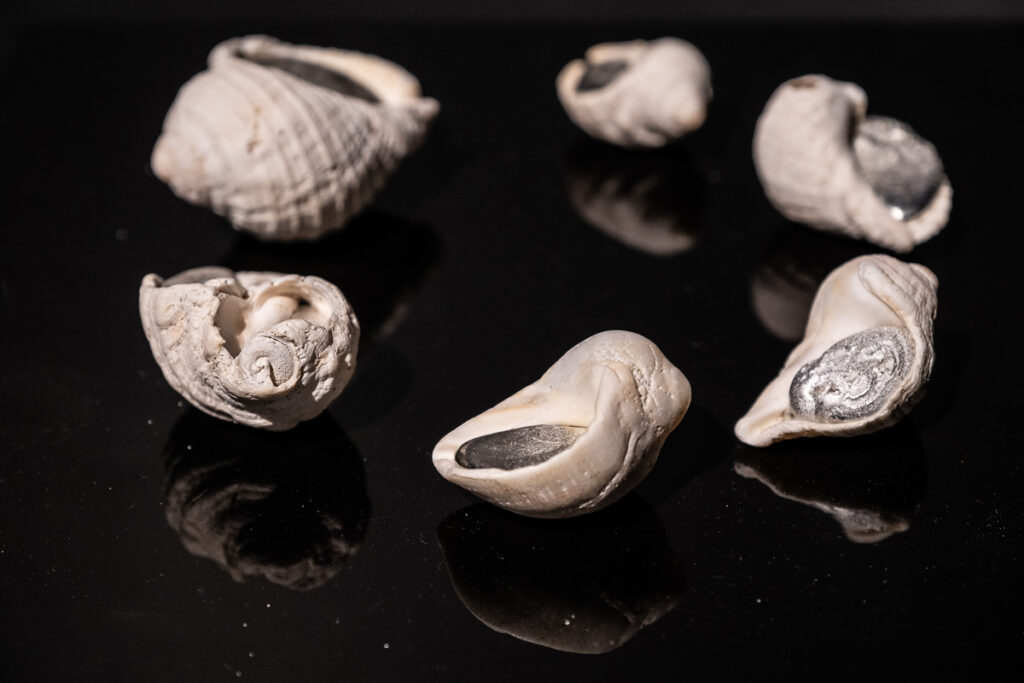 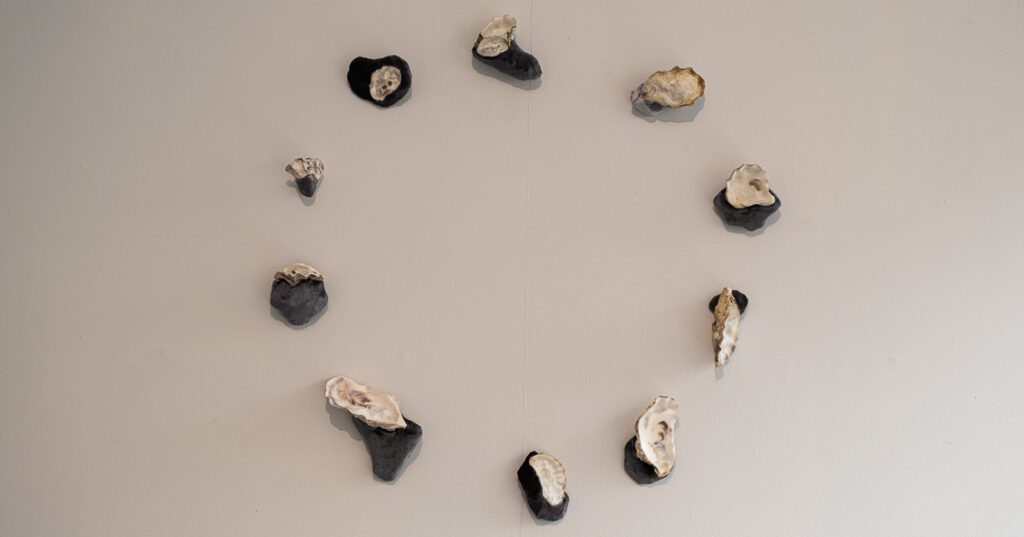 Throughout her practice, Gabbee examines water, how it carries particles of the land it traverses, traces of the animals who live in and along its courses, decomposing detritus of the forests and suburbs, industry run-off. Reverberations of 150kg-heavy whale hearts beat through sea waters and thrum alongside the echoes of peoples’ ancient song. Like motes of light streaming underwater, there is a current of luminescence through her work, in metal, fabric, shell: knitting into form an understanding of how life sustains itself through water.

Out of soft metallic leather, she has sewn a series of fish soft sculptures. They possess a surprising liveliness. One of these is a self-portrait: a spotted handfish, where Gabbee’s hands sit in place of fins. “They’re tiny”, Gabbee says of the fish, “and they have little side flippers like little hands and they go along the bottom of the water.” Gabbee explains how the Derwent River has been the province of the southern right whale, also. “Whales in the Derwent were [once] so prolific that people complained they couldn’t sleep at night. A few years ago, a southern right whale was born in the Derwent: the first whale I ever saw.” She also crafted a person-sized soft sculpture of a southern right whale calf that has her own eye. Or, more correctly, her eyelid: “My mother and my grandmother, I have their eyelid specifically; my aunty has it as well.” Handcrafted lead mussel shells also composed a piece in this exhibition, The weight of the river (49 objects). They shimmer with a dark yet beautiful foreboding, referencing the pollution of the waters thanks to the run-off from upriver lead manufacturing.

The Derwent River and its estuary grew in significance for Gabbee and her siblings following their mother’s death, after the family offered her ashes to the river in a ceremonial boat trip. Contemplating the transference of energy from one form to another, Gabbee reflects: “When I look at that photo of the ashes floating through the water, I think ‘that’s my mum, but she’s something different now’. It definitely solidified my relationship with the river, and gave a new empathy for people who have long ancestral connection to place that I don’t have, how torn people are from those places.”

After her mother passed away, Gabbee and her siblings spent a lot of time at the beach, watching the water. “I felt like I got to know it really well. This is a river, but it has lots of beaches. The estuary is quite massive, it’s one of the deepest harbours in the southern hemisphere.” Gabbee photographed her mother’s ashes drifting into the water and captured it on a layer of iridescent chiffon, in Back into the shimmering (my mother’s ashes in the river). She sewed small water-cast pieces of silver onto the fabric, echoing the light emanating from much of her work, like a lure or pearl. 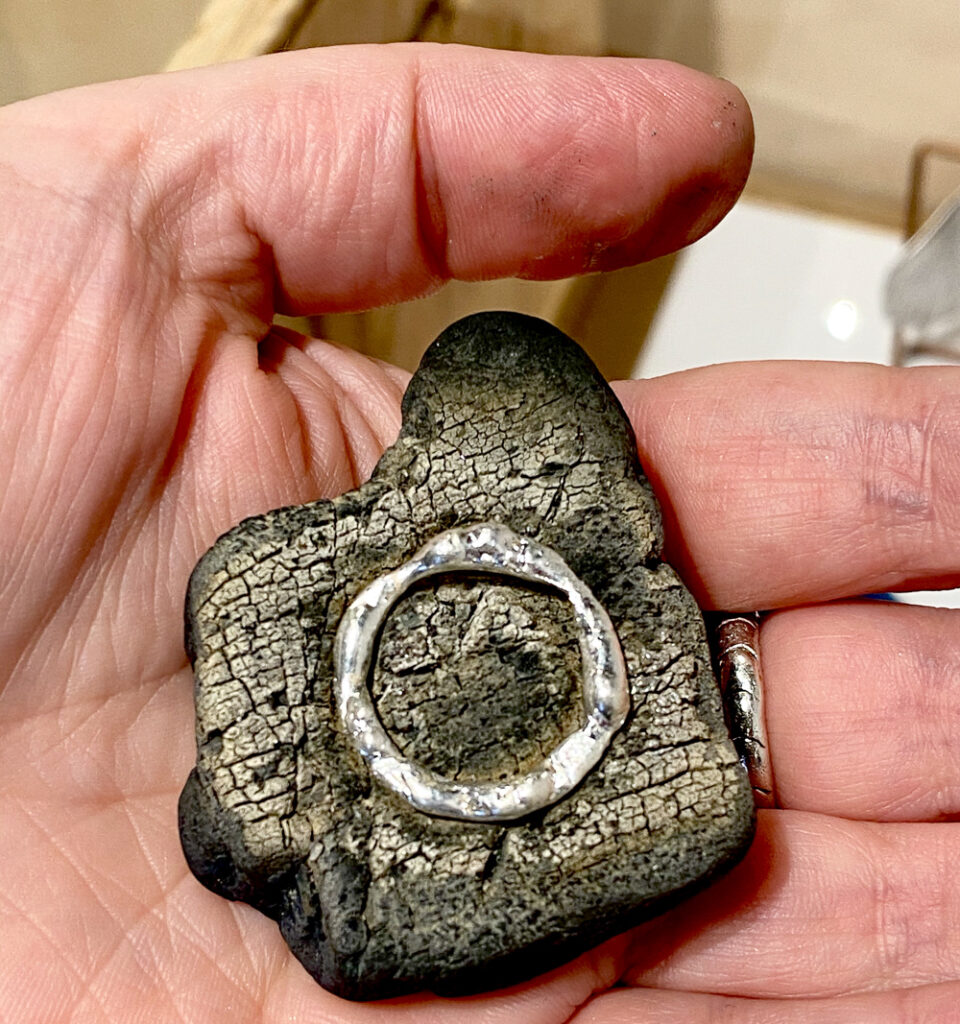 The provenance of water, how its origins and journey are imbued in its next iteration, has led Gabbee to harvest water from particular sources to use in her jewellery. Making metal molten, she casts it in a hand-carved mould to solidify in this collected water of meaning. She found coal at the defunct Saltwater River coal mine east of Hobart, and from it carved a mould with a diamond burr, making a space to cast her metal. “There’s a quiet stillness about [the mine], and also deeply entrenched trauma. At Saltwater River there’s coal in the water, all smooth like pebbles. It’s so soft.” Gabbee’s approach to water casting has seen her move from a learned, technical foundation of controlling the process to a new departure: experimentation has been gratifying.

“I had this idea that I could do it in a less controlled way, so I could get a reading of the water. I can go and get water from significant places; I wanted it to take on some of what water embodies. The shape and texture of it, liquid of it, and the massiveness of it, even. When I did it, it was better than I thought it was going to be. Capturing the water was quite a delightful, happy almost-accident.”

Gabbee’s work continues to explore the nature of water, our response to it, and the fate of water-dwelling creatures. She examines the periphery and boundary between intuited and named, liquid and solid, through crafting objects of beauty that spring from both natural and imagined spaces. Her efforts are as much about her process and relationship to water as the final pieces: water as purifier, message bearer, conduit of memory.

“I love being in the ocean; maybe this harks back to when my mother died. I feel like my bond with all my siblings became instantly strengthened, just doing things like going into the water completely clothed. Because there was all this surreal stuff going on in our lives, it just didn’t matter. I always feel like getting in the water is a real waking-up sort of feeling, and obviously cleansing, but makes you feel like ah, ok, I can move on to the next thing.”

Next things have included more exhibitions (Far From Here, Rosny Schoolhouse, Tasmania) and showing at Radiant Pavilion, which this year is exhibiting between The Boroughs in Melbourne and web-based presentation. Even online, I find the luminosity of Gabbee’s work calls me to look again. It reveals a true affinity with water as a medium and language, provoking in me a meditation on this precious resource.

This work is part of State of Flux at Radiant Pavilion 4-22 September 2021. Gabbee’s work is stocked at MONA and State of Flux (@state_of_flux_workshop) in Hobart and can be seen via her own Instagram @saintgabbee. 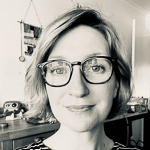 Sarah Stewart is a jewellery maker and freelance writer. She lives with her children and husband on a tree farm in Tarrawarra, Yarra Valley, on Wurundjeri Country; in her home studio, she makes jewellery as a response to the weather, the cosmos and her feelings. Combining her love of writing about artists and their work makes her heart content. Follow @sanctuary.precinct.