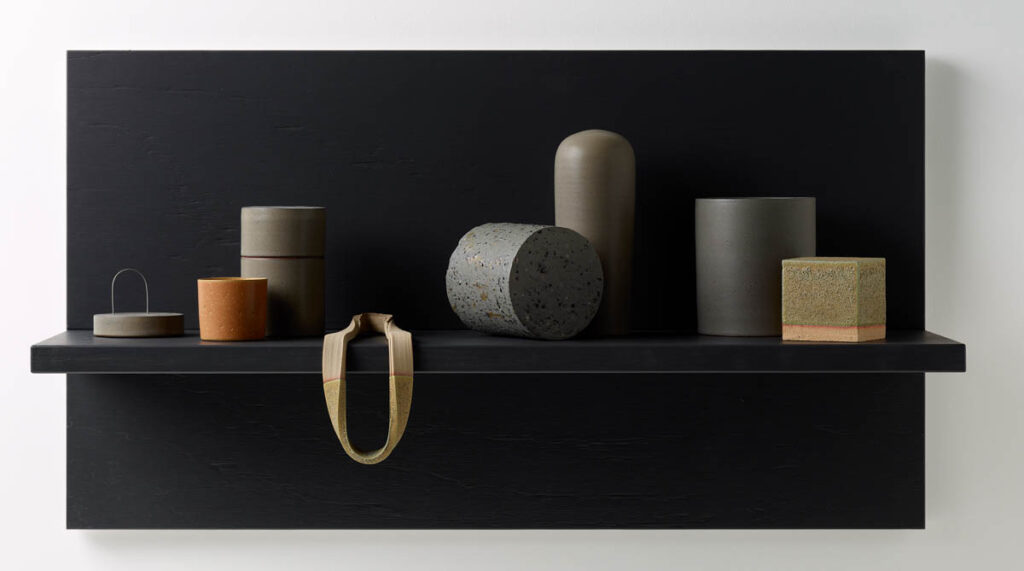 Jane Stewart writes about Kelly Austin’s ceramics, whose material response to the mined landscape of Queenstown reflects the genre of still life in painting.

If such categories were still relevant, it might be said that Kelly Austin is a painter who happens to work with clay. Over ten years, she has crafted exquisite ceramic vessels into assemblages which invite one to look, rather than use, and which create lively references to the traditions of still life and studio ceramics. Each piece is finely made, adhering to timeless expectations of the thrown form such as attention to edges and undersides, thicknesses of walls and lips, and evenly applied glazes. At the same time, they kick against this tradition and are predicated on her unsettled feeling that, in pottery, “there is a right way and a wrong way to work with materials”.

Austin calls these ceramic assemblages Stilled Compositions, a title which places them purposefully in the school of painting. They are the beating heart of her oeuvre and comprise an extensive and ongoing body of work—to date she’s completed 116 individual compositions. Collectively, they reflect the trajectories of her research and inquiry, her intense investigations into the ceramic medium and its place in the broader canon of art and still life.

Growing up in Vancouver, Canada, among a family of makers, Austin studied at the Emily Carr University of Art and Design where she majored in photography in 2011. Ceramics began as an elective where she recalls being taught the art of throwing “useful” vessels, although on graduating this medium is where she chose to focus her practice. She took a “deep dive” into ceramics when she enrolled in a master’s degree at the Australian National University, graduating in 2014. It was a pivotal period where she encountered influential Australian “potters” such as Gwyn Hanssen Pigott and Kirsten Coelho, as well as the Dutch ceramicist Geert Lap, whose works hover ambiguously between art and design. Jude Rae’s essays and realist paintings about everyday objects were also significant, particularly her thoughtful questioning of the seemingly banal.

Austin began to query the common perception that smaller ceramic items were to be used, held, filled and emptied. While components of the Stilled Compositions remained as open vessels, she also completely enclosed cylinders and other forms so they were stripped of their function. By placing these, apparently solid, three-dimensional objects beside bowls and cups, she was playing a subtle sort of trick on the “viewer”, prompting one to look twice and consider the peculiarity of these still life arrangements.

Recently, Austin has introduced a new language to the Stilled Compositions. While they remain grounded by the theoretical conversation about ceramics and still life, they increasingly reflect the environments she inhabits. In 2020, she was encouraged by her near neighbour, ceramicist Ben Richardson, to use the red clay from the lagoon near her home in Sandford, Tasmania. Furthermore, the works in her latest exhibition An Elemental Persistence are a visceral response to the industrialised, mined landscape around Queenstown, on Tasmania’s west coast, where she was artist-in-residence at the end of 2021. 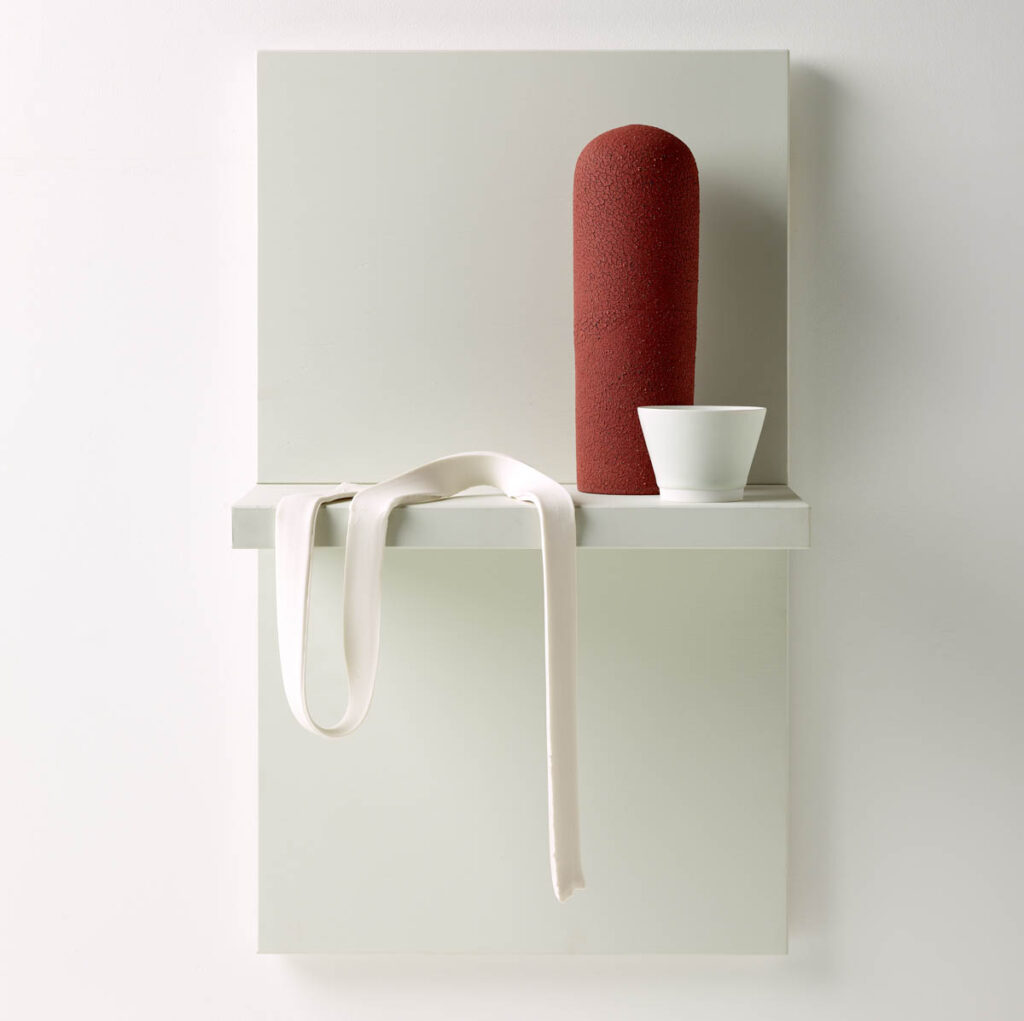 Austin arrived there within days of completing her third degree, a Bachelor of Architecture from the University of Tasmania. Stepping away from a concentrated phase of studying and designing buildings, she plunged into the fantastically raw, rugged and brutalised landscape of collapsing structures and hills debrided by mining practices. Recent exposure to architectural theories about “treading lightly on the earth” spoke paradoxically to the way in which dilapidated industrial structures were, over time, merging with the abused landscape.

Resident artist Raymond Arnold describes Queenstown as a place which has been “tempered and shaped by exposure to forces of nature and man. A prevailing westerly air-stream with two and a half metres of rain per year and over a century of mining have sculpted the hard rock landscape”. For Austin, Queenstown was the impetus for an intense phase of exploration. “Geology smacks you in the face here,” she wrote. “It’s as if someone’s scraped the layer of vegetation from the Earth’s surface and revealed what’s below.” Without access to a ceramic studio, she seized the opportunity to explore the strange terrain—to slow down, recalibrate, and capture new ideas through writing, drawing and photography.

Spending long days wandering through the town and its surrounding hills, she came across a colossal, sagging brick ruin—a smelter—describing it as “part architecture, part sculpture, part historical monument and part environment. A vessel at one point in its lifetime …”. Likewise, she was drawn to the crumbling remains of a vast tank which had been constructed decades past from a composite of cement and quartz:

The grit, rust and hard edges of Queenstown knocked sideways the delicate, subtle qualities which had characterised Austin’s work to that point. Ghostly, barely-there hues and perfectly smooth surfaces gave way to a series that is defiantly opaque: the deep, earthy palette bound to dark, overcast skies, rock, copper, gravel and rust.

In Queenstown, Austin dug clay from local sites. She also foraged for dolerite, bluestone and slag which she mixed with the clay body to create a rough, un-precious effect. These additives reacted to, or polluted, the clay and glazes in different ways: pitting, pocking, staining, repelling. In turn, the beautifully crafted ceramic objects give the illusion of being weighty and coarse like rock and concrete. Their tubular, conical and funnelled forms reflect the contrasting vernaculars of studio pottery and industry, as do the falling strips of clay which have been cut from large, thrown cylinders before being slumped from the shelves, their movement stilled during drying and firing.

In these works, handles are intentionally useless. Some are half-finished, clay pulled roughly into a horseshoe and placed carelessly—unglazed and unattached—within the perfectly finished pieces. Others are made from bent wire and poke flimsily out from the ceramic body like the handles of cheap plastic buckets. In Austin’s evolutionary cycle, functionality is becoming an unnecessary afterthought.

Glass and block-forms are also new to Austin’s oeuvre, marking a distinct departure from references to pottery and echoing instead three years of architectural studies. The textured and tinted glass rectangles emphasise the heaviness and opacity of the ceramic objects they lean against, creating a screen which distorts and invites reinterpretation. Equally, the right-angles of the clay “bricks” are a rude incursion into a dialogue that, once, spoke exclusively in circles.

The ground is shifting beneath Austin’s Stilled Compositions. Through the earlier series, she gave agency to ceramic objects which had traditionally been secondary to the still-life paintings that represented them. Nearly ten years on, these references remain although they have become the foundation for layers of observations which bring other meaning to the work. While the earlier pieces alluded to a half-life, or weightlessness, which was skilfully implied through pale glazes and the interplay of light and shadow, the new works are about the decomposition of solid form. On the one hand, Austin’s responses to dilapidated structures such as the smelter and tank in Queenstown are not so unlike the vanitas tradition in still-life painting, where dead or decaying matter represents the futility of life. On the other, her immersion in the ravaged, industrialised landscape, her search for local materials, and her keen observation of the tension between built and natural environments have fuelled a body of work which is fundamentally about life, where nothing is truly still. Here, Austin is pushing the boundaries of clay as an expressive medium, creating vessels and related forms which deny “usefulness” and exist, instead, in an animated conversation that moves between design and art, environment and life.