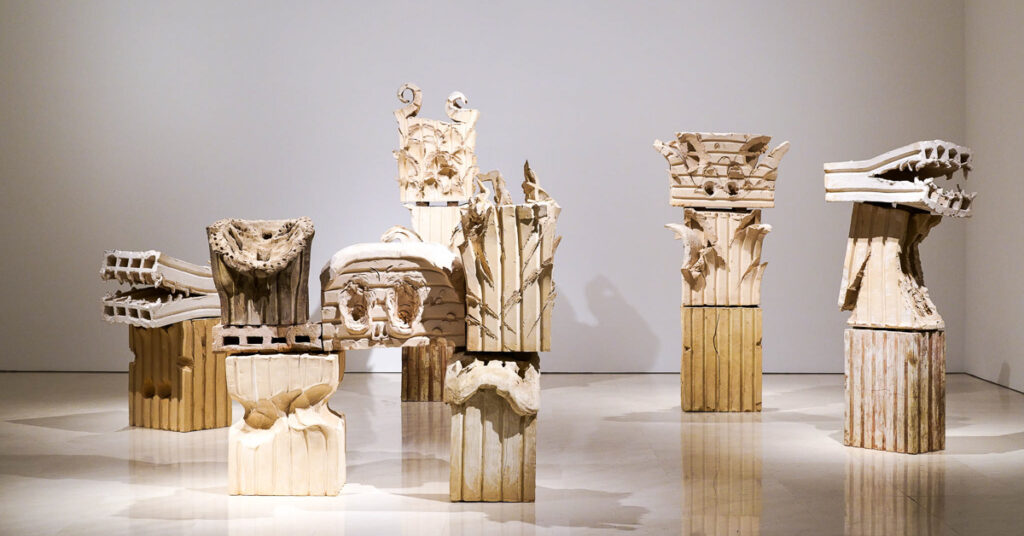 Majorcan artist Miquel Barceló’s extended stays in Mali provided his initial introduction to working with clay in the 1990s. With limited firewood available, the largely self-taught artist explains, “I started by picking up a stick, mixing, grinding… the most basic, definitely; really starting at the absolute beginning” (audio). Traces of the Spanish artist’s unconventional introduction to clay are apparent today – a certain irreverence to the rules, replaced with a sense of visceral material contact that could not be further removed from overthought perfection or the disingenuity of sloppy craft.

From this modest start with clay, Barceló has produced monumental works. Alongside stained glass and furniture, he produced a 280 square metre terracotta mural for Palma de Mallorca Cathedral (2007) that depicts the Christian miracle of the bread and fishes. He describes—and welcomes—the deep cracks that punctuate the work “like a jigsaw” where the drying slabs evocatively pulled apart (“Works in clay and paint” 2013). Opening a year later, his remarkable depiction of marine stalactites drip from the domed ceiling of the Human Rights and Alliance of Civilisations Chamber, in the United Nations’ Palais des Nations in Geneva.

Barceló’s consistent emphasis on materials (an earlier series of paintings was allowed to be intentionally eaten by termites) is conveyed in his choice of vocabulary. “It’s not exactly ceramics that I make, though: it’s more pieces of fired clay and sometimes not even fired, simply wet clay” (2013). Remarkably, the energy and possibility of wet clay remains palpable in finished works. Described as “another form of painting” (278), Barceló invites chance material change, explaining: “Sometimes the negative form of a droplet, a tiny spot, appears on my ceramics; they’re droppings from the owl that lives in my studio, which often fall on my ceramics and are turned into invisible spots at more than 1000 degrees” (2013). Similarly, “an error in the preparation of the firing” of Fulla de l’arbe negre (2017), Leaf of the Black Tree in Catalan (spoken along with Spanish on the island of Majorca) “makes it unstable and causes it to release small particles of material. It is therefore a piece that is in continuous transformation” (wall text). 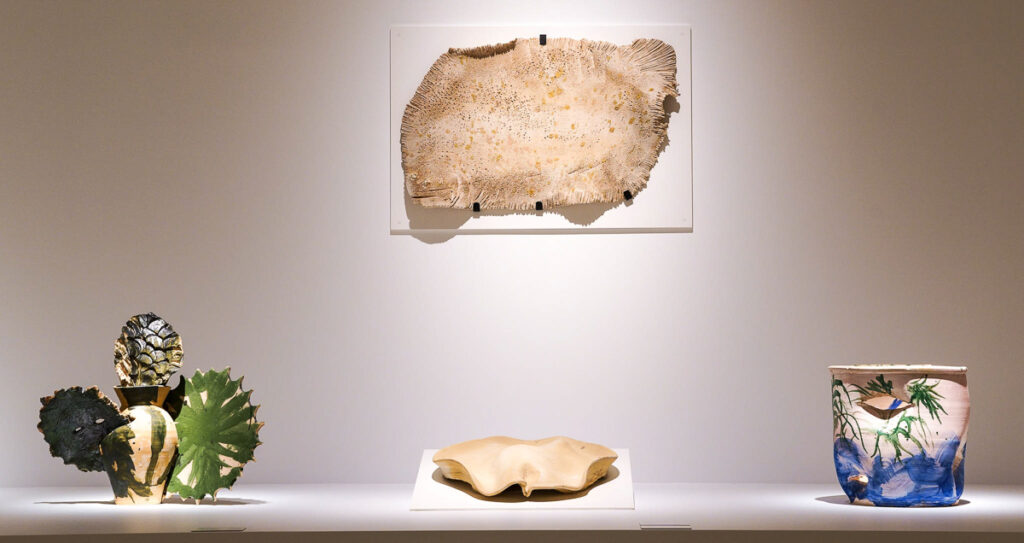 Curated by Enrique Juncosa, Metamorphosis is only the second exhibition of a living artist for the institution created in recognition of Picasso’s place of birth. The show “focuses on the artist’s culturally nomadic nature” (press), but Barceló’s practice is equally materially nomadic. Works in bronze, watercolour and mixed media are included alongside clay. His illustrations of canonical narratives such as Goethe’s Faust, Dante’s Divine Comedy, as well as the exhibition’s namesake, yet-to-be published illustrations of Kafka’s allegory, are a reminder of the artist’s breadth of references.

Thirty cut, crumpled and pieced works in clay suggestive of collage comprise the core of the exhibition. “Each work is experimental. Each work is a trial run for another that will probably never exist,” Barceló offers with a refreshing disregard for creative continuity (press). There is, of course, a little more continuity than this comment may say. Recent works reference botanical and marine themes evocative of the artist’s studio and workshop in Vilafranca de Bonany on the island of Mallorca. Rhododendron (2019), for example, is pieced from slabs with a terracotta leaf propped in the neck of a vessel, further foliage piercing the body. One colour—a deep green—appears in quick loose brush strokes across portions of the surfaces. Also from 2019, Planta Negra, Planta Ensofrada and Planta Groga share with Rhododendron the format of vessels holding evocative clay foliage protruding from the neck and sliced sides. 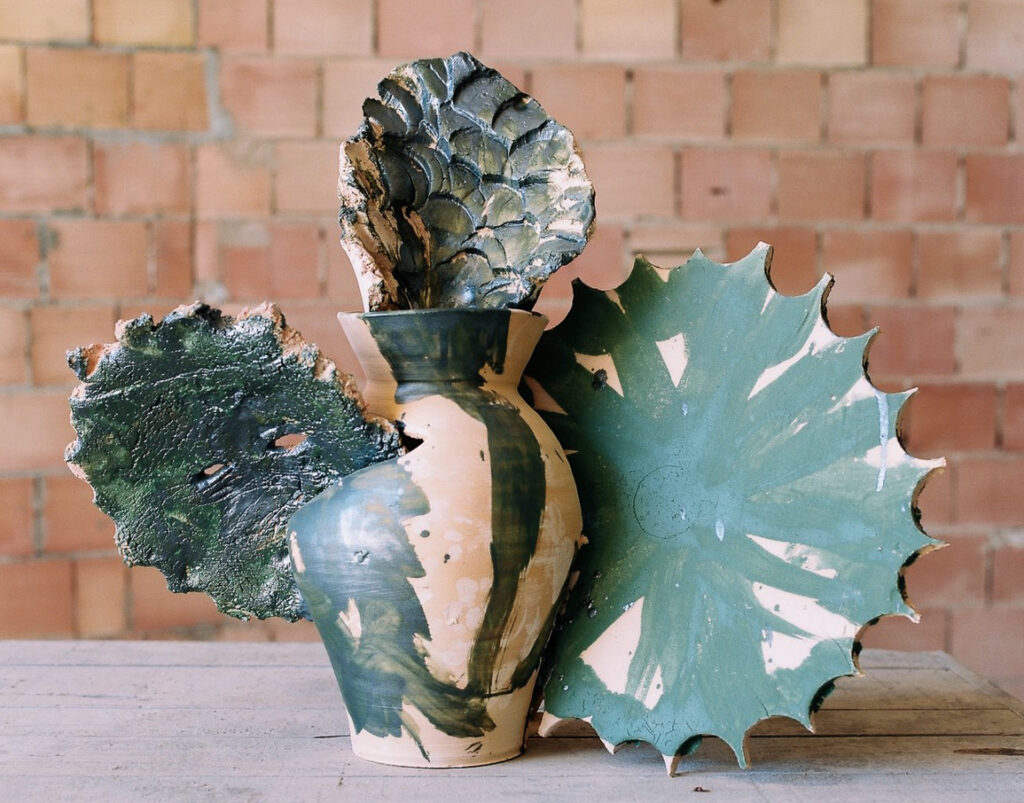 In other works, such as Acanto (2016), foliage slumps, while the anthropomorphic face of Peix Elefant (2016) is humorously pinched and pierced. There are moments too of stunning accuracy. A flatfish graces the gallery wall in Projecte de Trespol (2018), a work that must draw from the artist’s visual experience as a scuba diver (278). Two small bulging eyes, mottled skin and serrated periphery confirm Barceló’s detailed attention to the subject. In contrast, a collection of large uncoloured Totems occupying one entire end of the gallery. The sliced and carved blocks of clay also feel like something to encounter submerged, but suggest hasty experiments in the revival of classical architecture from a curious culture resurrecting their own understanding of material from an unknown future.