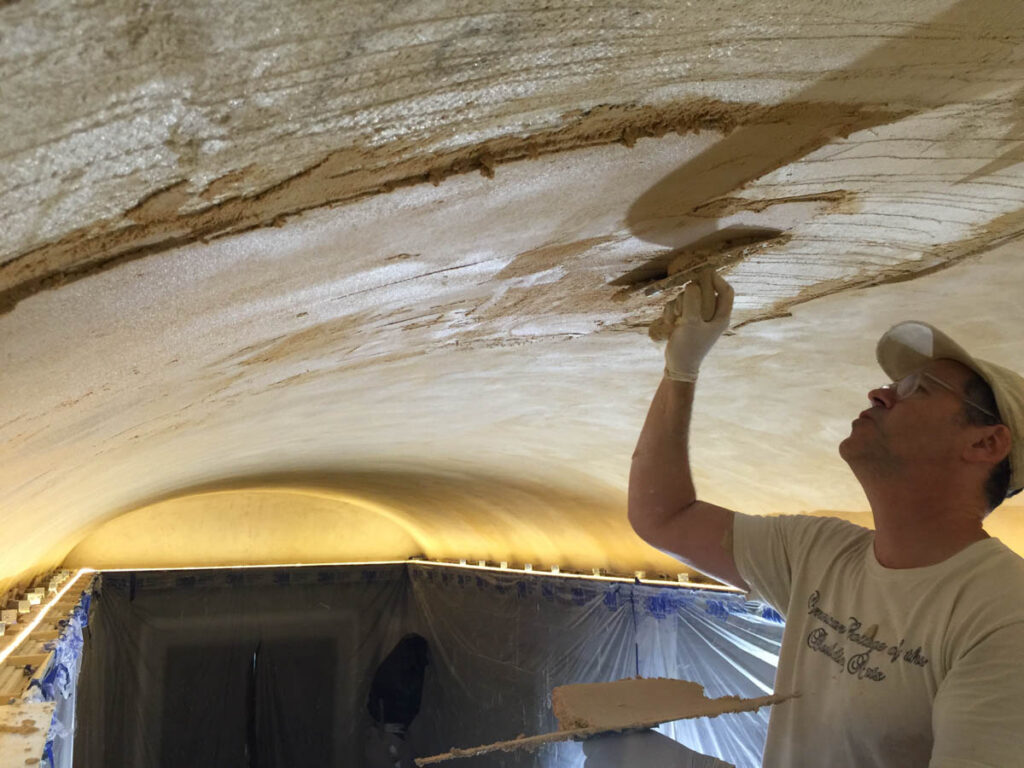 Patrick Webb at work on a ceiling

Kevin Murray interviews Patrick Webb about his perspective on the world as a plasterer.

Our current issue, titled Know How: The Grammar of Making, features an article by Patrick Webb, titled Maker Mythologies Classical Origin Stories for the Crafts, which is a fascinating overview of the key role played by craft in the ancient understanding of the world as a divine creation. This is a taste of the rich offerings from his blog called Real Finishes, which I highly recommend. What intrigues me about Patrick is that he articulates this complex world knowledge not as a university professor in humanities, but as an exponent of his own craft, as a plasterer.

Patrick offers a view of the world through the eyes (and hands) of a plasterer. For Patrick, plaster is part of the process by which humans were able to leave their caves and venture out into the world. Of course, the very word “ceiling” derives from the role of plaster in rendering impermeable membranes for our shelter.

Plaster is by nature a demanding substance. Beginning as a liquid, it quickly sets when exposed to air, which causes Patrick to believe that “the material is the master.”

When I ask Patrick whether craft could be considered a form of knowledge, he doesn’t shy from its dimension as labour: “What I do requires a great bit of physical exertion. You build muscles, you sweat.” Rather than drudgery, Patrick sees the physicality of plastering as good for both physical and mental health.

Nonetheless, Patrick does advocate for a kind of knowledge that is revealed in the doing. When he reaches the limits of describing this in his writing, Patrick then turns to poetry to reflect this haptic understanding.

Patrick offers a critique of Plato, particularly the way his academy required students to know geometry, yet would not admit artisans who he saw as a lower form of life.

I was curious how Patrick gathers so much knowledge outside the modern academy of the university. For Patrick, the university is “a place of intellect and cognition” and therefore not a natural place for the “arts and crafts”. Craft knowledge is embodied experience that is best taught through the apprenticeship system.

I wonder if that is necessarily so, especially given Patrick’s critique of Plato’s academy for the exclusion of artisans.

Finally, I brooch the issue of gender in Patrick’s language, which frequently mentions “craftsman”. Patrick says that he did ask some female students what they preferred to be called, and found “craftsman” the most popular.

What I appreciate while listening to Patrick is his generosity of knowledge. He puts great effort into his various writings without the systemic rewards that are built into academic careers. It is a testament to knowledge as a currency that we can all share.