Rowena Strain ✿ Broome, the centre of the world 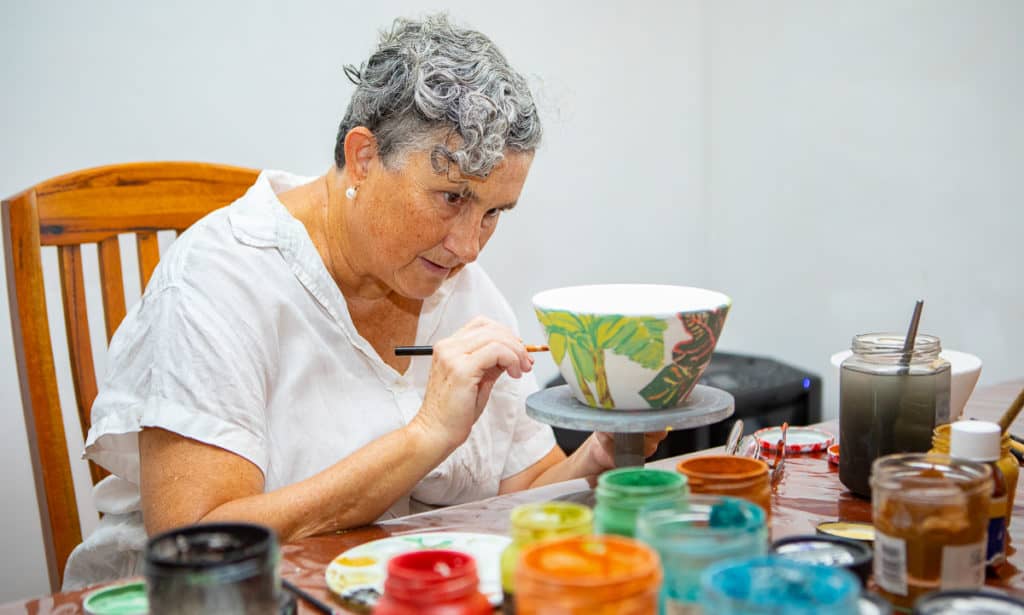 The north-west Australian town of Broome is a vibrant cultural centre. The exhibition Alternative Archive at the Broome Museum’s Sailmaker’s Shed featured local artists, including the potter Rowena Strain, whose bowls tell the story of Catholics who’ve made a home “at the centre of the world”.

I’ve lived in Broome for the past 20 years, after growing up in Sydney and studying at the École des Beaux Arts in Paris. I majored in painting. I started learning ceramics at Broome TAFE about seven years ago with a great teacher, Karen Morgan. I enjoyed hand building until I learnt to throw on the wheel, then I never wanted to go back. I established my own studio four years ago, making functional ware and experimenting with glazes. Maiolica glazing has been important to me for the past couple of years. I enjoy being able to paint in the glaze, with a smooth satin surface. I had an exhibition in December 2018 of functional ware painted in maiolica with local bush flowers and plants.

I wanted to create bowls which would tell the story of different people who have come to Broome and are part of the Catholic Church here. 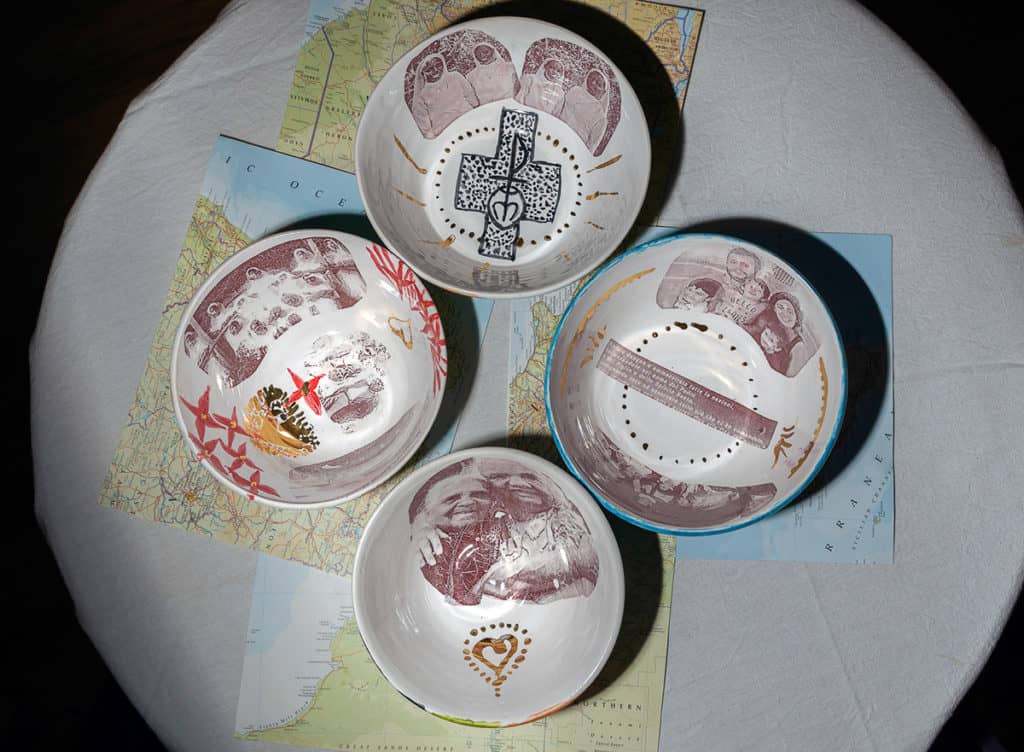 1. A Spanish brother, who left his order, married a local Aboriginal woman and started a sheep station. He has passed and his daughter now plays the organ for the choir.

3. A Jaru woman lives in Broome after her Stolen Generation childhood saw her taken from her mother in Halls Creek at two years of age. After many years of deprivation at Moola Bulla government station, she was taken to Beagle Bay Catholic Mission, where she married and then moved to Broome with her young family. Some of the others from Moola Bulla were sent to the East Kimberley and became protestants. 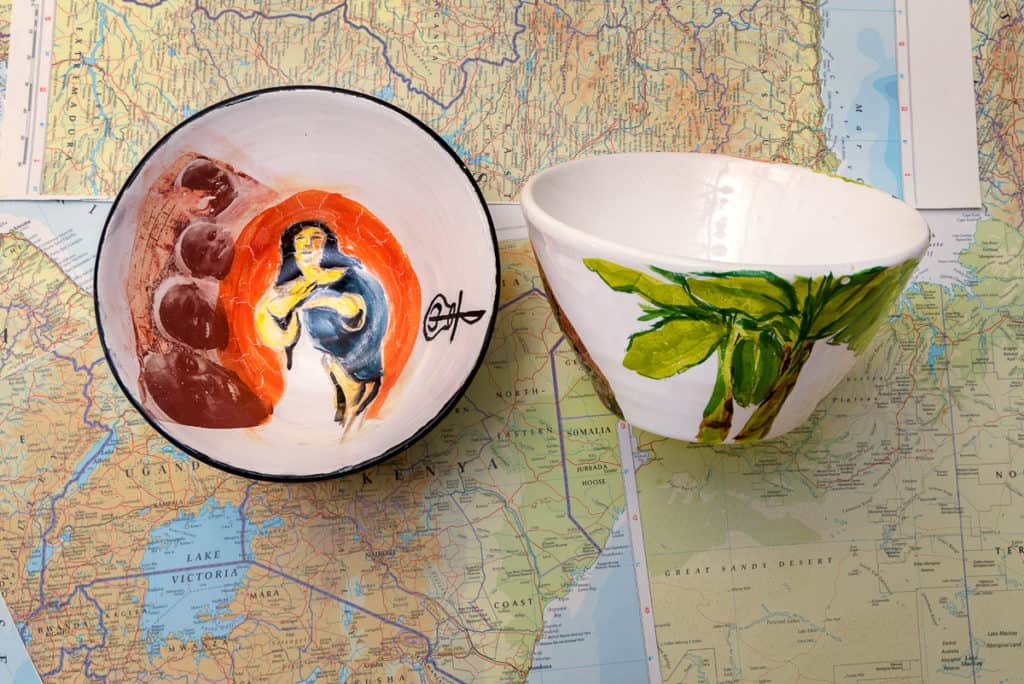 4. The Sisters of Our Lady of the Assumption. These four vibrant women came together to Broome from Kenya. I met them through the choir at church where they sing beautifully. When I explained my art project, they were interested and invited me to morning tea. I explained that I wanted to include a photo of them, and also images from Kenya and from their order. They each wear a coloured bead bracelet which they explained was the colours of the Kenyan flag, black, red and green. They showed me pictures of Our Lady of the Assumption and of the symbol of their order. I was interested that the symbol included a pot holding up the cross. I asked about the significance of the pot. They explained that in Kenya a family shares their meal from the one pot, there are no individual bowls.
We took some photos out the back under the mango tree.

My process in creating the bowl was to bisque fire white clay wheel thrown bowls. They to paint the maiolica elements, for the Sisters this was the flag, Our Lady of the Assumption, tea plants and the symbol of the order. This was fired, then a photo decal was applied and fired. Then some lustre decoration was added and fired.

For the exhibition, I displayed each bowl on a small map of the country of origin. The Sisters were very appreciative of their bowl and of seeing their country under it. 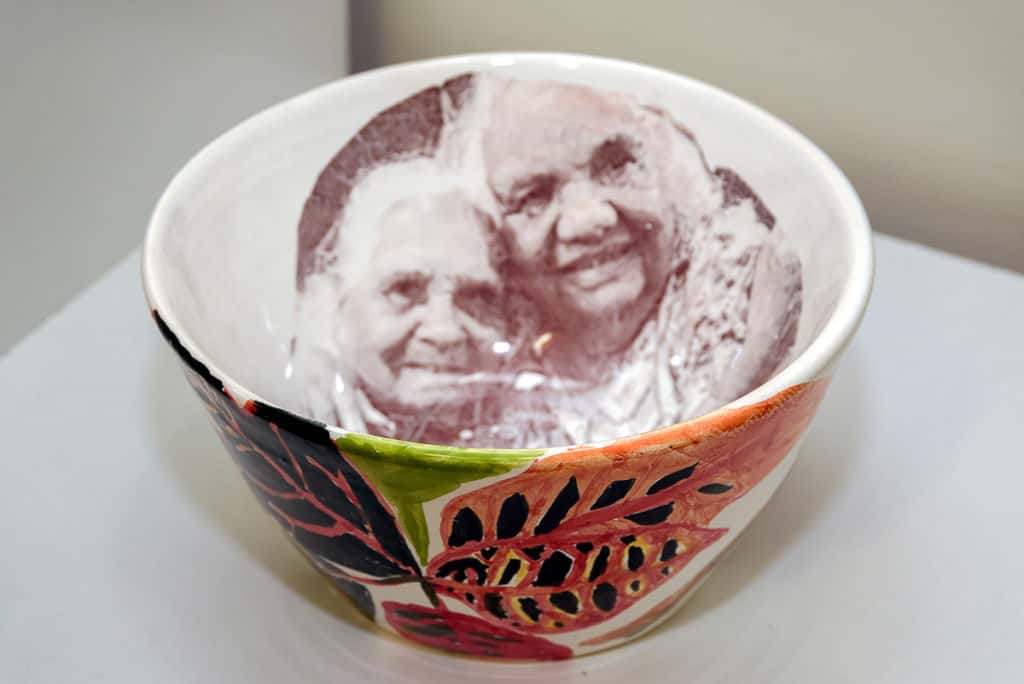 Well, I really enjoyed making these bowls and hearing people’s stories, seeing their photos and then putting the bowls together. I’d like to find ways of continuing to work like this. Using photo decals and lustre were new to me and I’d like to keep working with them as I think they go very well with the maiolica painting.

Rowena Strain is a Boome-based potter who has a Facebook page here.