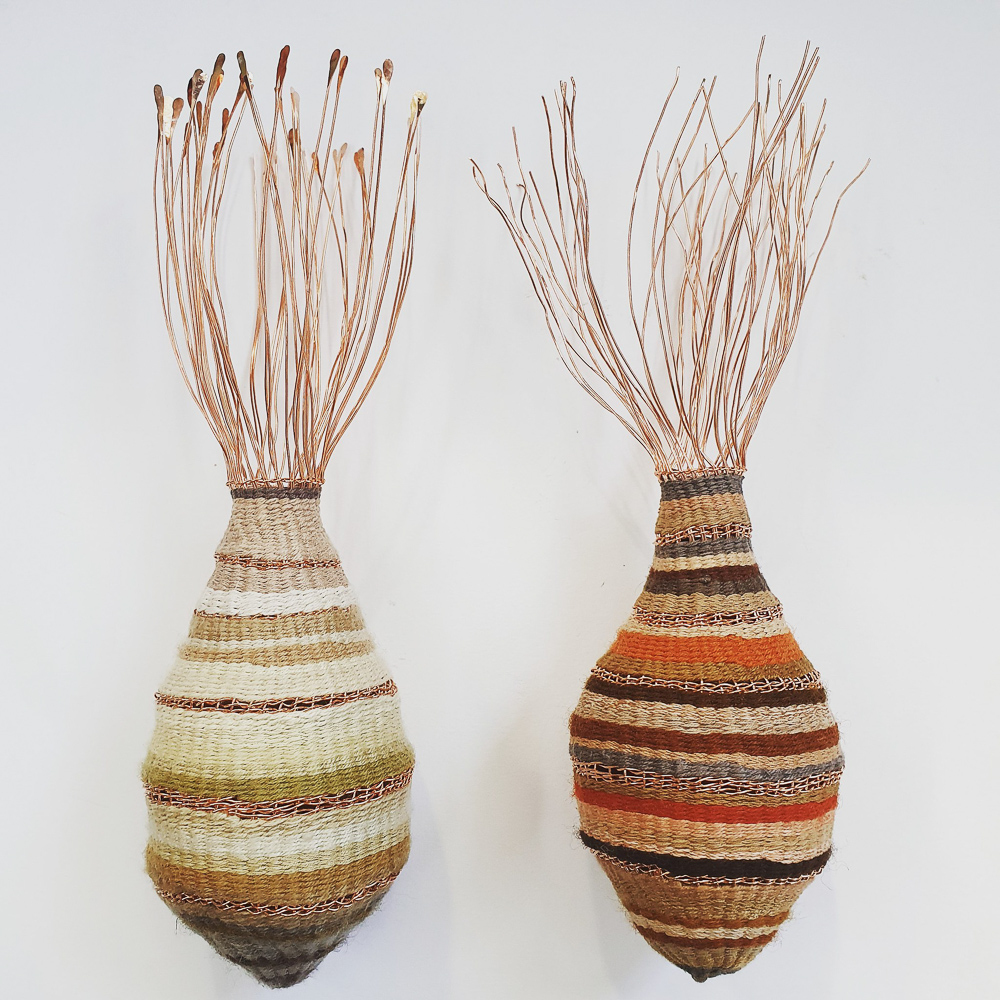 Vy Tsan introduces an exhibition by Sally Blake that reflects the cycle of destruction and regeneration in the Canberra landscape.

Place Markers is an exhibition with ideas that have ebbed and flowed with the landscape that it is inspired by. The solo exhibition, on now at Craft ACT: Craft + Design Centre, presents the work of Canberra- based visual artist Sally Blake whose practice spans across textiles, drawing and sculpture.

Blake’s practice is influenced by her keen interest in cycles of death, renewal and regeneration as expressed through the cycling patterning and experimentation with plant matter in her work. Blake is a celebrated artist, being a finalist in significant art prizes such as the Blake Prize, The Waterhouse Natural Science Art Prize and the Woollahra Small Sculpture Prize. Blake’s investigation of place and research in creating eucalyptus dyes is supported by funding grants from The Australia Council and ArtsACT.

The ideas behind the body of work presented in Place Markers were seeded for Blake almost a decade ago. In 2014, Blake spent a month in the Gudgenby Ready-Cut Cottage at Namadgi National Park through Craft ACT’s Artist-in-Residence program. While at Gudgenby, Sally focused her research on the collection of plant materials from bogs and fens to use for plant dyes. During the residency, she mused that “[a] plant’s rootedness means the colours it produces indicates aspects of the environment in which it grows”.

For Sally, “working in the space between art, science and conservation [was] particularly rewarding”. After her residency at Namadgi National Park, Blake continued her research into organic materials and their use in textile forms. Throughout 2018 and 2019, Blake began collecting leaves and barks from the ACT eucalypts at the Australian National Botanical Gardens. These plant materials are processed to create dyes that colour the thread and cloth that is used in Blake’s woven works.

It was not until 2020 though, that Place Markers would come into full fruition as the body of work currently being exhibited. The fires that burned through Namadgi National Park in the summer of that year revealed to Blake how places have been marked in history by climate change’s devastating effects. This resulted in a series of works crafted from burns, ash, drought-affected burnt leaves, and weaving techniques that bring together the physical loss caused by climate change.

Blake considers plant dyes to be “a unique intersection between humans and the natural world”, her work highlights how the landscape responds to our relationship with nature. This body of works in this exhibition demonstrate how the eucalypts, as they go through growth, destruction and regeneration, produce colours and textures in their dyes which document Australian history.

The exhibition itself ebbs and flows like the natural world it is inspired by. Pieces in the exhibition which explore degradation such as, “Burnt Spikes” are balanced by the optimism of the “Holding Hope” series. CEO and Artistic Director at Australian Design Centre, Lisa Cahill comments on the exhibition’s ability to explore how “devastation creates a landscape seemingly without hope but then nature prevails revealing the shoots of new growth and the possibility of renewal.”

Copper wire, silk, wool, linens and plant dyes weave together an exhibition that uniquely documents our relationship with place. 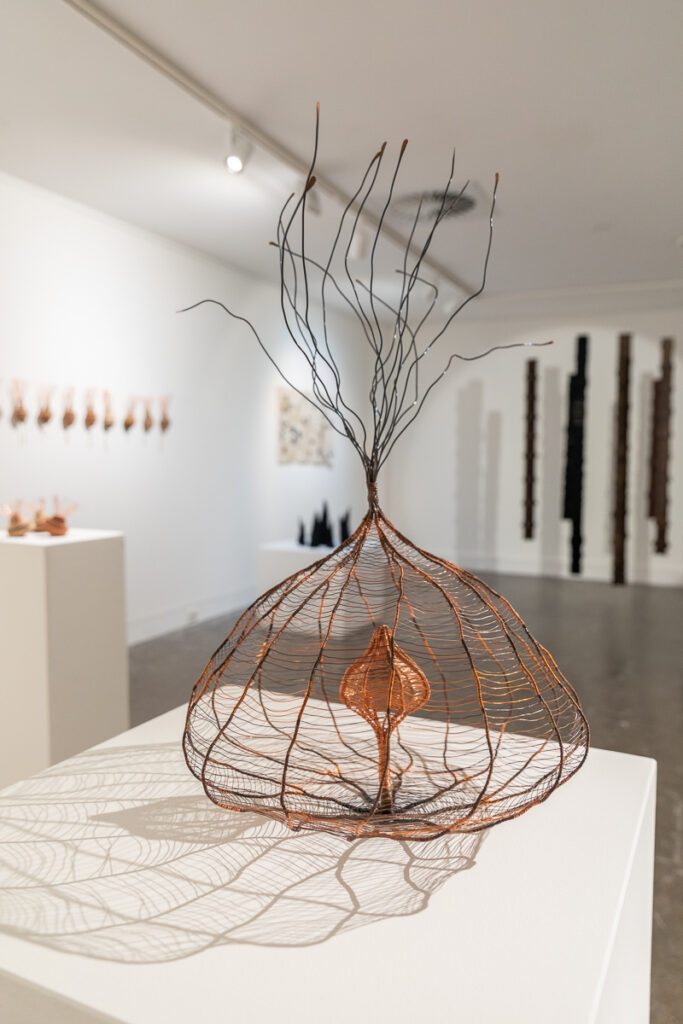 My research for Place Markers began in 2018/19 by collecting leaves and barks from the ACT eucalypts at the Australian National Botanical Gardens. I processed these plant materials to create dyes to colour threads and cloth to make baskets and work on paper. Each basketry work in the Holding Hope series is made from the dye colours collected from one species of eucalypt. To highlight the flourishing of life that the ACT forests protect, I also drew a series of animals, birds and insects with ink and pen.

After the dye research was completed 80% of Namadgi National Parks eucalypt forests were burned in the 2019/20 fire season. The fires throughout Australia were so devastating that they have marked a place in history where climate change undeniably declared itself. In Canberra, although protected from the kind of devastation the 2003 fires wrought through the Canberra suburbs, we lived for weeks with pollution levels amongst the highest in the world. It felt like climate change was upon us and I hoped, like so many others, that policy and decision-makers would now act. At the time of these fires, I was working on another solo show The Ancient Gaze which was all about climate change which opened in mid-February 2020 at Belco Arts. At the time I wrote,

Climate change has declared itself in Australia through catastrophic droughts and fires. There is profound heartache as we contemplate the incalculable losses of life and habitat, instant extinctions, a shifting sense of safety as we wonder if this is the new normal. Horror at the vast losses of forested landscapes.

There is palpable anger about the lack of wisdom and action from those that hold power. Rage that scientists and firefighters have told us what will happen, yet their warnings have gone unheeded.

There is also an up-swelling of compassion and support for people and communities who have lost family and homes, for the animals who have died, and for those still suffering. There is a deep sense of gratitude for the firefighters who have worked so hard to protect what they can.

Hope has also sprung up. Hope that the grief and anger, compassion and gratitude can be harnessed with wisdom, so the necessary environmental, social and economic changes will be made to avoid worsening effects of climate change.

To make works for Place Markers that acknowledges the huge loss and destruction in the ACT forests I worked with burns, ash, drought-affected burnt leaves to create works on paper. I also made a suspended series of tubes, Burnt Eucalypts, with double cloth weaves dyed in eucalyptus and iron. Hanging in this series is also three works made with stitched black felt. Now in mid-2021 life has begun to regenerate in the forests, and I made a large copper wire work Regeneration to celebrate this renewal. 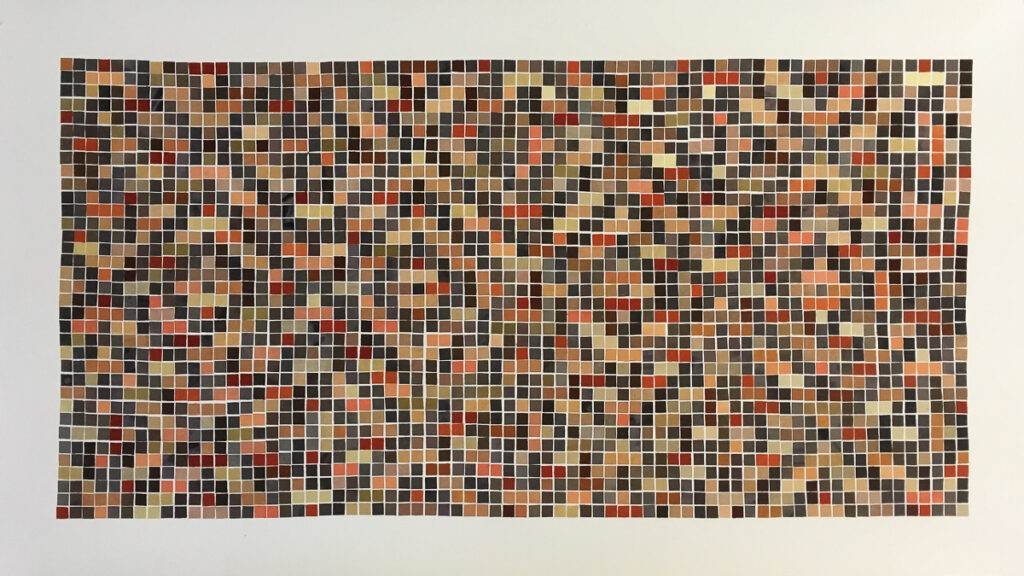 The Eucalyptus Dye database was first created through research at The Australian National Botanical Gardens in 2016 with a grant from the Australia Council. This allowed me to collect the dyes from the leaves of 230 eucalypt species and the bark of 100. The ACT eucalyptus research was the second large contribution to the database, and this was supported with a grant from ArtsACT.

In the future, it would be ideal to continue adding to the database. To do this I need to work with Botanical gardens to make sure the species are labelled correctly. Collecting the plant materials, processing them, photographing the dyed samples and digitising them for the database is very labour intensive and I need time between projects.

I have also done research on the effects of weather, season on the dye colours from the same tree over time, through a weekly collection from a local Eucalyptus melliodora (yellow box). I have studied the effects of location on dye colour by collecting from the same species growing in ten different locations across Canberra. There are noticeable differences and I have shared this research with my students at ANU and in workshops. I will add this to the database.

Inspired by the peoli ✿ Textiles that emerge between the river and the forest
"We are a country whose lungs are on fire" ✿ Mourning the lost trees of Turkey
Becoming blind to climate change: An age-old Japanese solution
4,000-year-old string discovered in Egypt
Helen Ganalmirriwuy ✿ The magnificent gunga mat
The precious "ta leec" backpack from Co Tu village
Project Dor ✿ Care to wear
Julie Ryder ✿ Hidden Sex