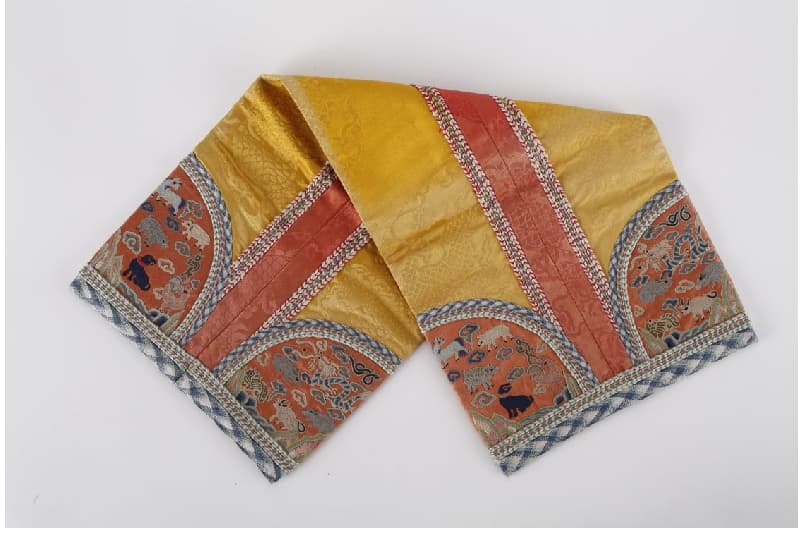 The snuff bottle pouch adorns a key ritual that binds Mongolians together: the exchange of smells.

“This process can occur anywhere. Anywhere. And with anyone. I have taken taxi rides where the driver offers me his snuff bottle and we go through the motions. Once, during a long train ride, I had to be woken up to accept some stranger’s snuff bottle. It is a beautiful thing.”

-A tourist to Mongolia, writing here in 2012

Long having outstripped its original purpose, the snuff bottle in Mongolian culture retains a singular power to unite strangers. For many special events, especially first meetings, the exchange of snuff bottles still serves as the time-honoured equivalent of a handshake. A host and a guest may meet on a doorstep, each extending their own bottle, and, after exchanging them, both sample gently the other’s snuff, before returning it to the original owner. The practice of this tradition is far from uniform: in different regions, different protocols may apply for exchanges between elders and youngsters, family and extended family, lovers and rivals. What unites these transactions is the snuff bottle as a symbol of earnest intention; of a warm greeting and the hope of an enduring relationship. Perhaps just as importantly, the snuff bottle, and its accompanying bag or pouch, stand as rich vessels of the artistic and cultural history of Mongolia.

The snuff bottle has its beginnings in the Qing Dynasty of the sixteenth and seventeenth century, when European traders introduced tobacco to the kingdom. While the smoking of tobacco was soon frowned upon and even outlawed, the inhaling of snuff, or powdered tobacco, was allowed, ostensibly, for its use as a remedy for common ailments, especially headaches and colds. Of course, it would quickly find favour, too, among those with more recreational pursuits in mind. The snuff box, the snuff bottle’s European analogue, was supposedly inadequate in the new surrounds it found itself in. It is said to have proved insufficient at keeping the humid Asian air from spoiling the dry goods inside. Admittedly, too, its size and sharp corners rendered it cumbersome to handle and for long travel. A snuff bottle, then, would serve the same purpose as its European cousin, and indeed eventually take on a very similar artistic and status-seeking symbolism, while doubling as a more sturdy and condition-suitable vessel. Early on, snuff and the snuff bottle were the preserve of the Qing Dynasty’s upper class, and bottles of startlingly ornate design began to be commissioned by the rich and the powerful. But, over several years, they would spread throughout the whole of Central Asia, including to Mongolia, and among every social class. During this period, the exchange of snuff bottles began to develop into the social rite still practised today. And even as the Qing Dynasty’s power receded, and the recreational use of snuff died too, snuff bottles became increasingly sought after as a collector’s item. Authentic bottles from the period can these days sell for tens of thousands, or even more. 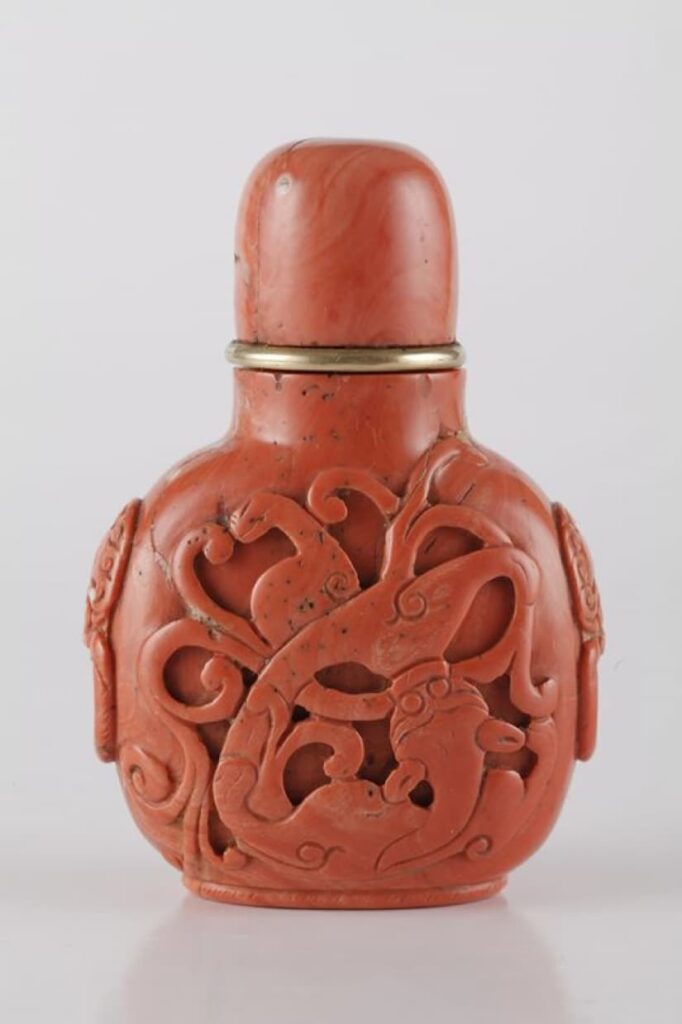 In Mongolia, snuff bottles were often made out of precious stone long-revered for their special powers. Coral stone, for instance, was one of the most expensive and desired stones with which to produce and fashion a bottle, regarded for its healing and protective powers. Women in labour traditionally rubbed snuff bottles made of coral stone with their palms to facilitate a smooth and complication-free delivery. Chalcedony, meanwhile, is said to be capable of treating epilepsy and seizures and dissolving negative vibrations. Chalcedony snuff bottles are thus another popular variety of bottle found across Mongolia. Adorned often with engravings of dragons, lions, and the good luck symbols of bats, lotus flowers, and the holy fungus, the most spectacular Mongolian snuff bottles stand as a lasting testament to the land’s artistic tradition. But just as rich in culture and design are the pouches or bags made for the safe-keeping of snuff bottles. Made almost always of fine silk, and embroidered with vivid ornamental designs, many snuff bottle bags exemplify the still-thriving art of Mongolian needlework.

In 2017, an exhibition at the Bogd Khaan Palace Museum in Mongolia unveiled more than a hundred pieces of “embroidery from Mongolia’s foremost embroiders and rare pieces from the repertory” of the museum itself, which is the site of the Green Palace, once occupied by the eighth Jebtsundamba Khutughtu, who would later become Bogd Khan, or ruler, of Mongolia. The exhibition also officially launched a six-month project of remaking, at four times the original size, Bogd Khan’s famed snuff bottle bag. The project was overseen by the NGO Egneshgui Sanaa, which was founded in 2005 with a mandate to revive traditional Mongolian embroidery art.

“By the time our NGO was founded, traditional Mongolian embroidery art was on the brink of being forgotten,” the head of the NGO, Mrs. Z.Tsengelsaikhan, said at the exhibition.

“And now, I personally have taught embroidery to 3500 women, passing down the precious art to future generations.”

Mrs. Z.Tsengelsaikhan, as one of the leading practitioners of traditional Mongolian embroidery, remains dedicated to teaching the next generation the lessons she received as a child from her paternal aunt. Even the current COVID-19 pandemic hasn’t sabotaged her teaching. She recently collaborated with the Facebook page Oyocenter to deliver virtual lessons to youths stuck inside like herself during the pandemic.

While the resolve of teachers like Mrs. Z.Tsengelsaikhan should ensure that the ancient lessons and life of her people continue to be transferred to the next generation, the lasting effects of COVID-19 on society are, of course, not yet known. Like the handshake, the exchange of snuff bottles may have to be avoided as a token of greeting for a long time yet. But when households all over the world can begin again to receive guests in steady number, there is little doubt the snuff bottle of Mongolia will be offered by host and visitor alike as a gesture of lasting goodwill.