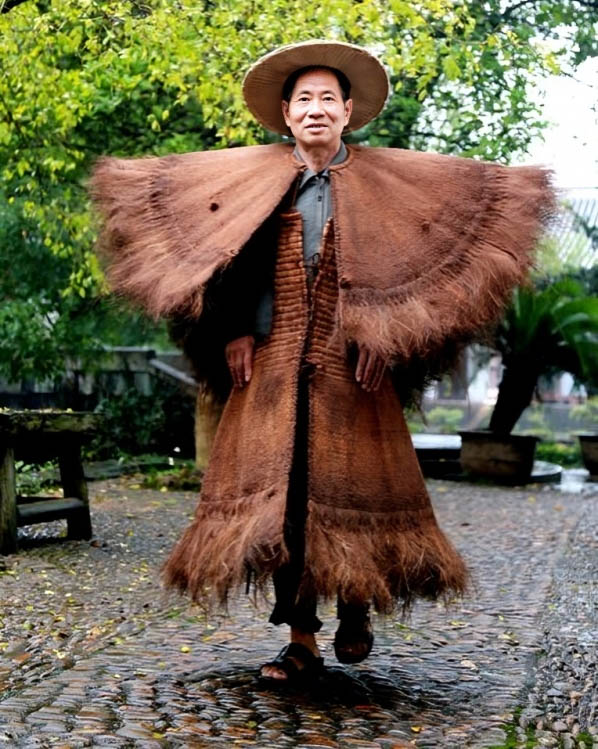 A villager wearing a full set of suoyi.

Shuai Shao finds one of the few remaining makers of the palm fibre raincoat that has protected Chinese farmers for generations, but has now become a popular good luck charm.

IIn the past, people in the Jiangnan area of China were not unfamiliar with straw clothing, also known as suoyi 蓑衣. Suoyi is made of pure palm fibre, which is highly breathable, durable and environmentally friendly, and will not rot for decades. The hood is large and thick, making the person look like a clumsy hedgehog; However, it shelters people from the wind and rain and acts as a cushion for countryside farmers to rest on. People with suoyi were not afraid of getting their clothes wet or cold. In the past, poor people may have had thin quilts in the winter, so they put their straw capes on top as extra quilts. It was an indispensable and beloved item for farmers in the old days and still is one of the fond memories for folks living in the countryside. For Rucai Lyu, it has been his life’s work for over 50 years.

Rucai Lyu was born in 1950 in Longyou County in Quzhou. His ancestors were engaged in rope making, but the rope industry was no longer prosperous by his father’s generation. His father believed that people had to have a craft to have a stable life, so Rucai took the village’s suoyi maker as his master and learned how to make suoyi. Rucai has a pair of skilful hands and learned the craft quickly and satisfactorily. “At that time, the master often praised me for my fast learning.”

Rucai finished his apprenticeship after three years of learning. In a time of an underdeveloped economy, Rucai started to travel around as a craftsperson for a living, constantly changing places. He is very proud of his craftsmanship, “The average suoyi weighs about 5kg, but the ones that I make are about 4kg. This is proof of great handwork and skills.” At the time, every household needed suoyi, but it was expensive. “The average suoyi costed 10 yuan at the time, which was equivalent to half a month’s salary to some folks.” For this reason, Rucai’s suoyi were made with the most delicate details and of high quality so that farmers could wear them for at least 30-40 years.

As time goes by, plastic raincoats have replaced traditional straw capes, farmers have also stopped to farm in the rain, and suoyi is gradually dying out. “Suoyi craftsmen have disappeared since almost 20 years ago.” As an ordinary craftsman, it is difficult to resist the impact of time on an industry and a craft. For Rucai Lyu, he can only learn a few more skills to ensure that “there is food for the first and second half of the year”. “I persisted for a few years, then I had to switch to make palm beds and mattresses to earn incomes.” Rucai is also skilled at making cotton wools, “craftsmanship never stops. We are either busy making straw capes, or producing cotton wool during the Spring Festival times.” In the eyes of Rucai, who has worked all his life in the countryside, it is hard to have such luxurious enjoyment of “retirement”. 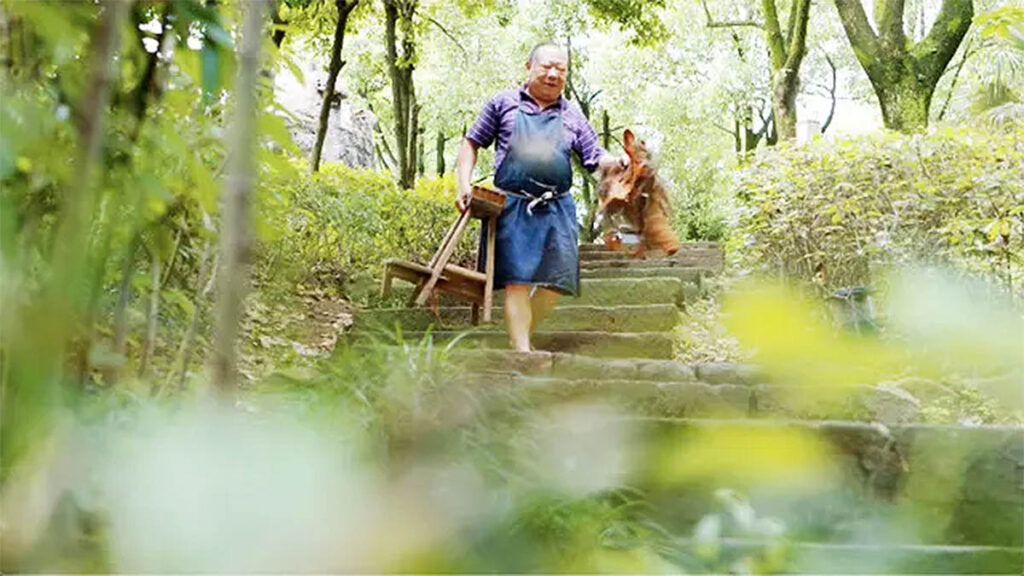 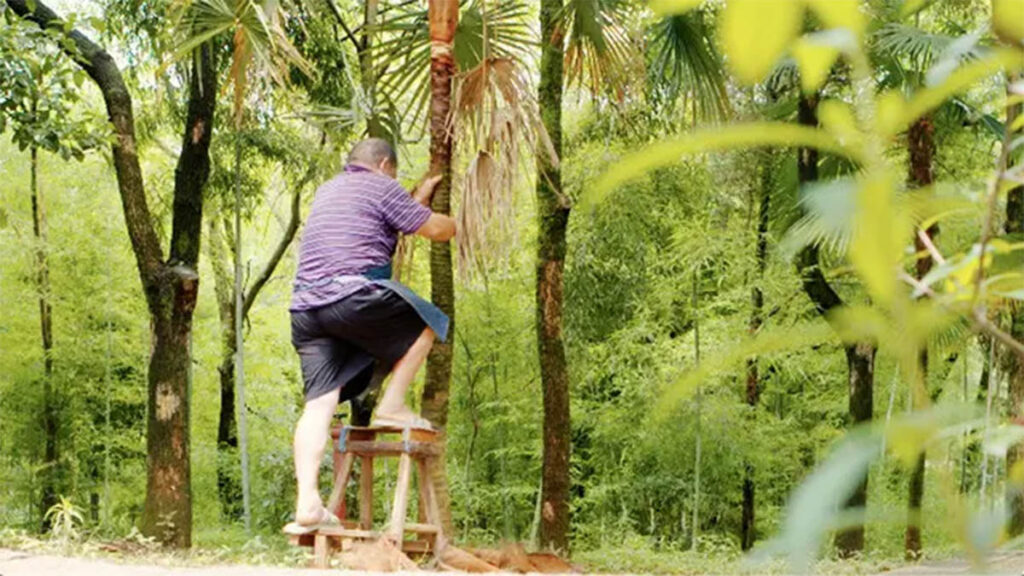 In the production process of suoyi, the first step is to collect palm leaves. Collection of such leaves requires climbing to a high palm tree, which is a very physical-demanding process. After harvesting the leaves, they need to make the palm leaves into palm fibre thread that can be used for weaving. This requires using a metal claw to repeatedly pull hard on the palm leaves to create thin fibres. Afterwards, the fibres need to be rubbed in hands to make them into thin threads, and then the thin threads are twisted into ropes to have enough strength to be woven. 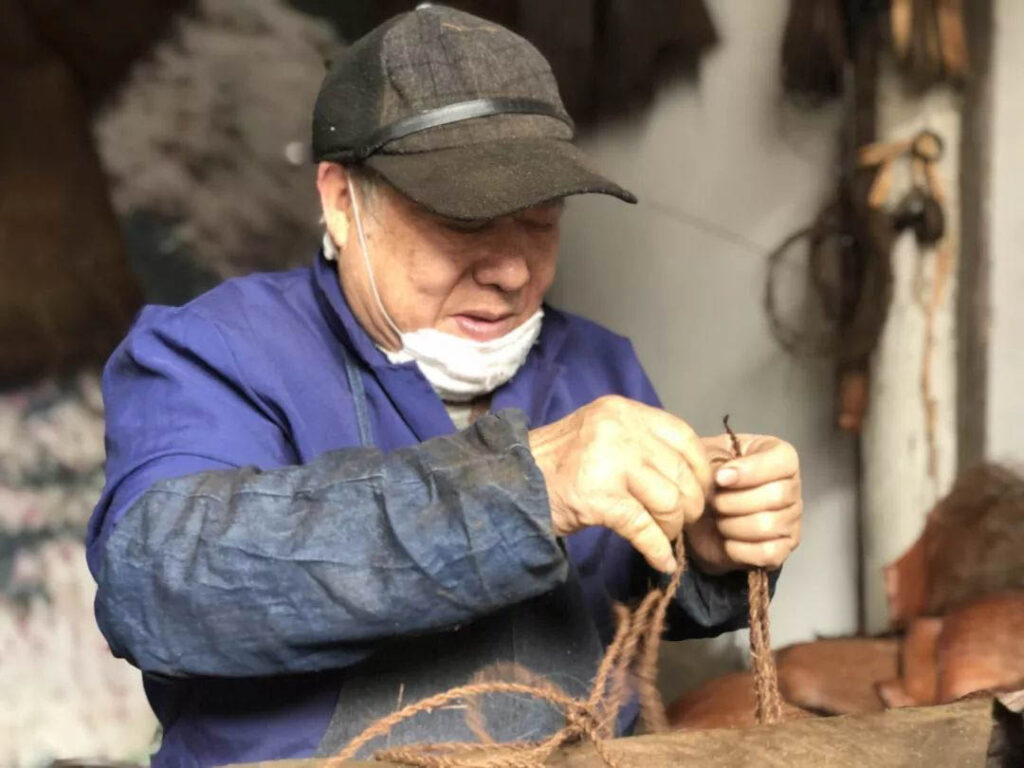 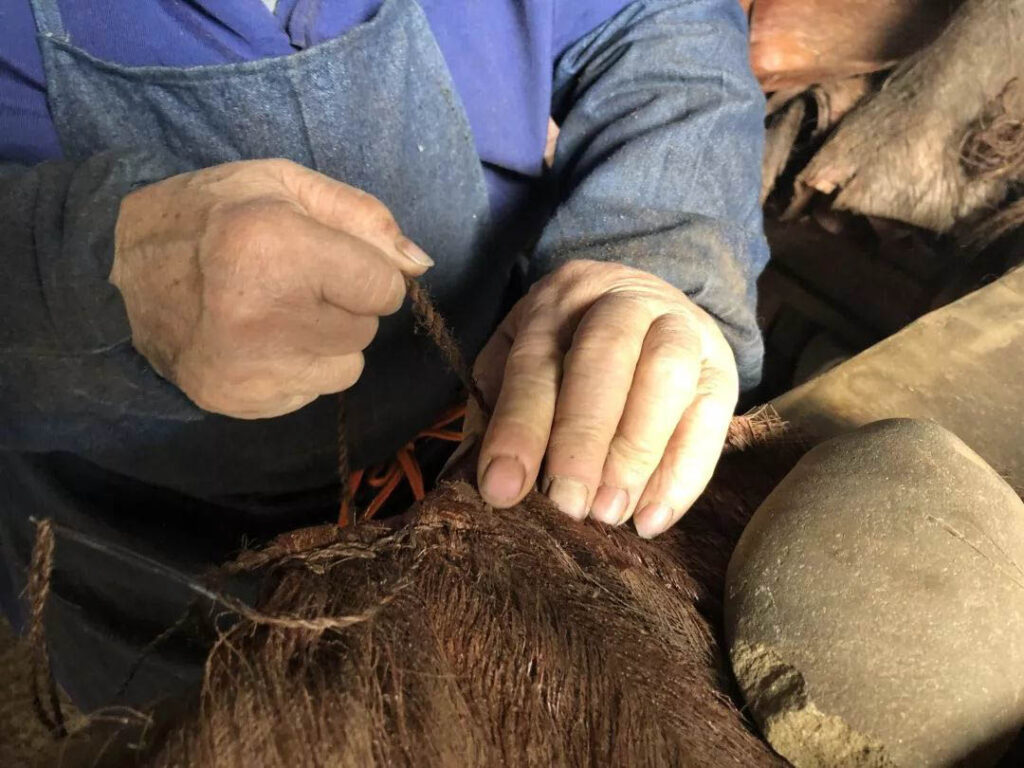 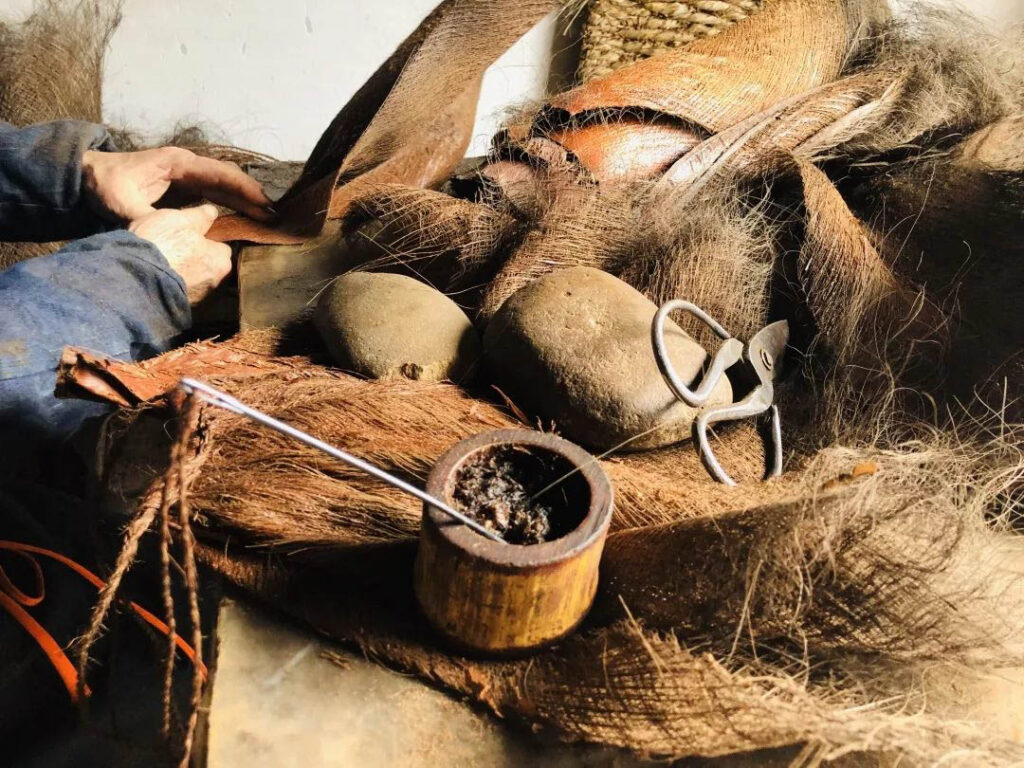 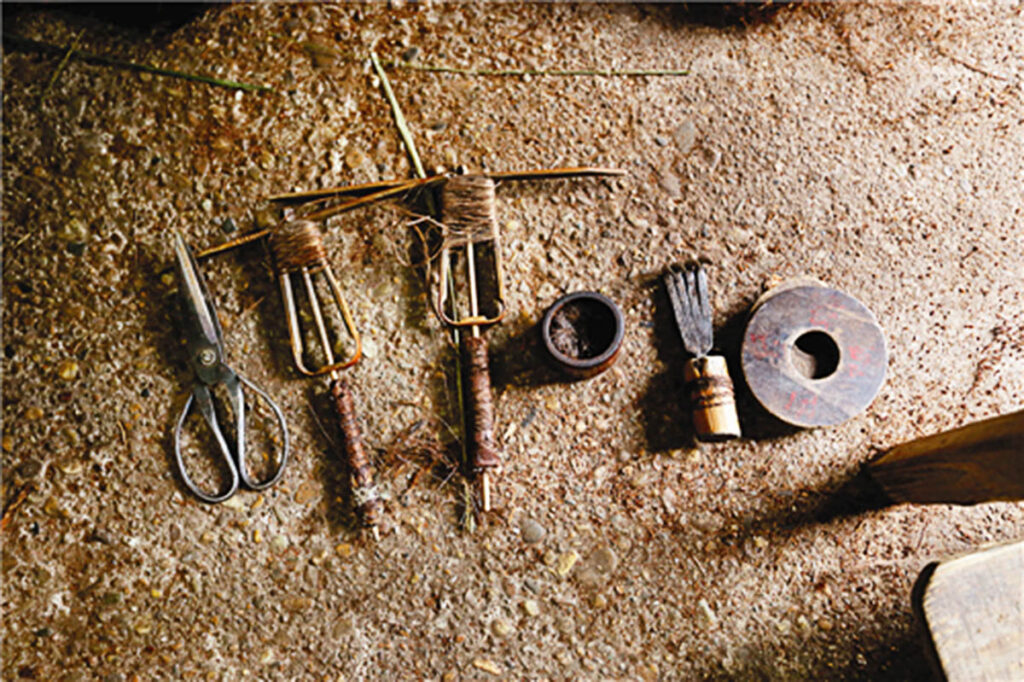 The production process begins after the preparation of threads. Since the palm threads are less flexible than other materials, and the suoyi is purely made of palm leaves, it can’t be folded. Therefore, when hand-making suoyi, the makers must keep a squatting position so that the clothes are in a relatively relaxed state. When they were young, they squatted even longer than sleeping every day, which also made their joints extremely burdened, and many are left with joint problems.

The crucial thing in all of the processes is the production of the collar. After the collar is woven, the palm leaves can be connected to the collar. This is the production method of the simplified modern version of suoyi. Craftsmen often use a round bowl to simulate a human neck and then weave palm threads around the bowl to form a neckline. After completing this step, they also pet the neckline with their hands repeatedly to soften the collar and make the clothes easier to wear.

After that, they only need to weave the selected palm leaves on the neckline to complete the production of the suoyi. After the suoyi is finished, it looks like a butterfly with open wings. Although it’s sleeveless, It can ensure that most part of the body stays dry in the rain.

It was not until 2006, in the census of the intangible cultural heritage of Longyou County, that Rucai’s weaving skill was discovered again by the government. In 2007, Rucai was invited to be a long-term artist in Longyou County’s Residential Garden to exhibit weave Suoyi.

“I haven’t made suoyi for many years, and I’m afraid I had become rusty. What I didn’t expect is that once I held the needle in my hands, I instantly remembered how to do it.” In the grey wall and black tiles, Rucai regained the skill of crafting suoyi as the days went by.

In addition to participating in trade fairs all over Zhejiang Province and showcasing the weaving skills of Suoyi, Rucai often goes to school. “Children like to learn things from me.” Lyu knows very well that in about a dozen classes in a semester, children could only learn how to make a rope. “But at least, they have seen suoyi and know that people used to wear suoyi to work in the fields.”

“This craft work is not a quick fix, if you want to learn the craft, I will definitely teach without reservation, or else, when our generation is gone, this craft will be lost.” 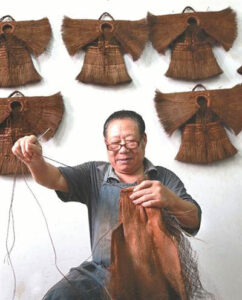 In August 2018, a group of Taiwanese tourists came to Quzhou for sightseeing, and Rucai was invited to show his weaving skills. “They liked it very much. They bought several small suoyi and said they will use them as amulets.” The small suoyi that Rucai makes is, in fact, very popular, and the size and weight are only about one-third of the adult version. Many overseas Chinese, especially those who have ancestors or have lived in the southern China area, purchased his mini version of Suoyi to comfort their homesickness.

“I have never been abroad, but my works have been sold to the United States and Japan…” Lu Rucai is very proud of his work.

Right now, his only worry is that there is no one to pass on the craft. “Many people came to learn, but none of them stayed. A young nurse persisted the longest, learning for a month.” Rucai says that times have changed, and he doesn’t quite understand how young people think now. “We wanted to learn the craft well back then, but now people ask me if they can make money when they come. This craft work is not a quick fix, if you want to learn the craft, I will definitely teach without reservation, or else, when our generation is gone, this craft will be lost.” Rucai said.

Even in the countryside, Suoyi has been retired and is fading away. But in the main hall of the workshop still hangs a large straw cape, like an eagle with wings spread, guarding the craftsman busy at the table.