The Kyrgyz yurt: Let the hearth not go out 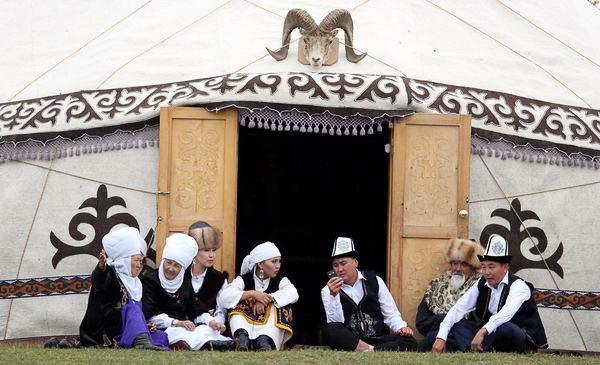 Kyrgyz family sitting near a yurt during the World Nomad Games in Cholpon-Ata, 270km from Bishkek, Kyrgyzstan, 04 September 2016. Teams from Azerbaijan, Kazakhstan, Mongolia, Kazakhstan and Tajikistan participate during the World Nomad Games are competing in ethnic sport games during this cultural event that runs from 03 to 08 September.The mission of the Games – the revival and preservation of the historical heritage of the nomadic peoples of the world civilization.

Kyrgyz culture, habits and general outlook, spirit are contained in a yurt. Yurt was a home they lived in harmony with nature, gray, blue sky, the sun. Cool in summer, warm in winter. Yurt has a great philosophy. Yurt used to move about for thousands of years.

Another type would be a camel, gray house. He was blindfolded and uniting the two bigger, straw and covered with tin, its felt kind of fast, easy to handle, quick to sew. Made in accordance with a young family to live on their own temporary. His appearance was like a camel, that’s easy to build. Nomadic people living in the mountains quickly and easily take off to camels and trucks. Yurt is holy to the Kyrgyz nation. It expresses th e beauty of the Kyrgyz people, family, social life and culture. In the Soviet period, the yurts were used as houses for shepherds. Yurts were comfortable in rain, storms. At present, yurt special highlights of each family. 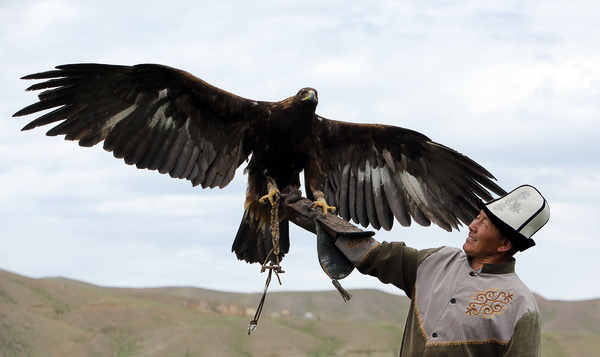 Wood part of the yurt

The yurt consists of wood, felt, chiy, boo-chuu. Tunduk, uuk, kerege and bosogo sticks are made from wood, namely from willow and birch. Tunduk is the wood rim on the roof, through which light coming in and smoke going out. Tunduk consists of alkak, chamgarak, chegir or bastyrma. It made by master called tundukchu. The next thing to be fixed is kerege-expanding lattice wall-sections. Tunduk and kerege are joined with the help of special wooden boards called uuk. The prop, to which is fixed kerege and uuk, is considered as the wooden decoration, and made from rounded sticks. It is called sacanak. The next thing made from wood is doorfame. It is ornamented and fixed by the door, but often it is fixed by the door made from chiy. 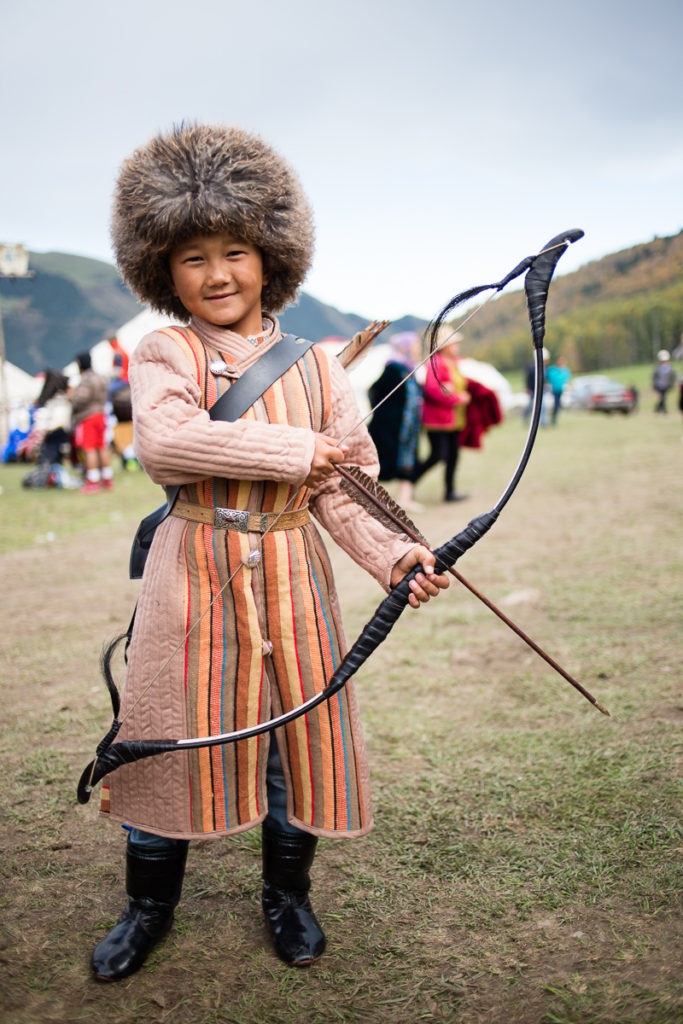 Felt part of the yurt

The next part of yurt is – felt. Tunduk jabuu, uzuk, tuurduk, eshik jabuu are made from felt. Uzuk is made from three layers of sheep’s wool, white on either side and a thicker layer of black wool in the middle. Uzuk is totally covered over uuk, without leaving any hole. Uzuk consists of two parts in the form of isosceles trapezoid.

The lower part of uzuk which is ornamented and decorated called totogo. Decorated part is called kyldyrooch. Covering for the kerege called tuurduk, which is in the form of a rectangle. The number of tuurduk depends on the size of the yurt. The corners of tuurduk are fixed by terme boo, the other sides are fixed with woven belts and terme boo is fixed to uuk. Tunduk is covered by a square of felt named tunduk jabuu.

Yurt’s woven part is made on the tool called ormok. 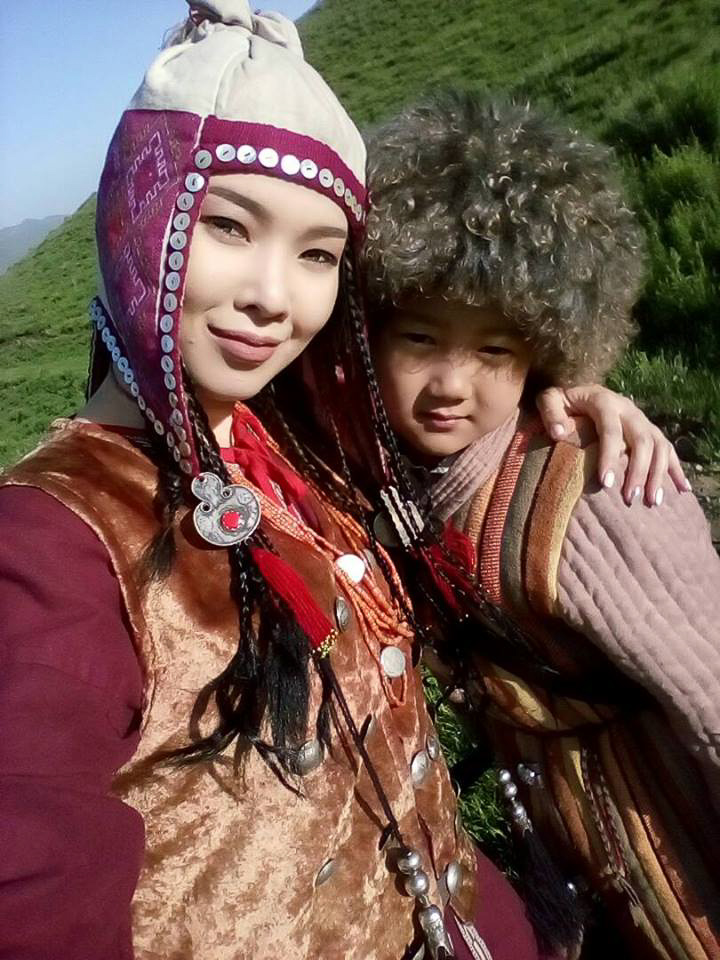 Another decoration of yurt is a mat made out of the stems of chiy. Mats are used to insulate the latticed frame of the yurt and to separate the kitchen from the other parts of the yurt (ashkana chiy). The internal part of door, eshik chiy, was also made of a patterned mat. Chiy mats around kerege can be made plain or patterned. But the chygdan chiy(ashkana chiy) are always patterned. The kerege is comprised of separate sections called kanat. The size of a yurt depends on how many sections it has. For example, a small yurt is comprised of 4 sections, and a large yurt is made of 12 sections. A medium-sized yurt is 6-8-10 meters in diameter and 4-8-10 meters in height. At present times two-three yurts are set combined. 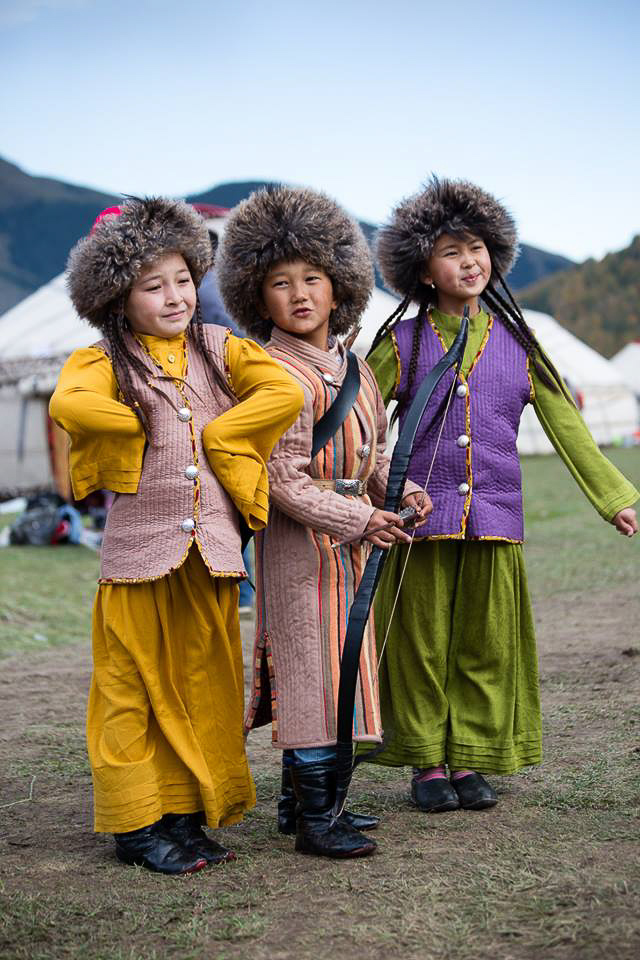 Setting of the yurt

Usually in the yurt installation, women take the most responsibilities. The men help to set tunduk and cover uzuk jabuu. The first thing to do is make a wooden frame, then comes a door frame, which is joined to expanding lattice wall-sections called kerege. The expanding lattice wall-sections are fixed by special straps made of camel and bull skin, and to the doorframe kerege is fixed with a woven belts (terme) decorated with ornament. Then the tunduk is elevated with the help of a special stick called acha bakan. The dome of yurt is created of the special curved poles called tunduk. The next step is to wrap up felt and mat. At first two long mat are tied around the expanding lattice wall sections, the dome of the yurt is covered with two felt carpets called uzuk, and the ropes are covered with felt, called tuurduk. In the center of the dome is fixed a four-sided figure from the felt.

Internal side of yurt

The inside location of yurt and distribution of its products have been identified with the life of people, habits and each side had its own meaning. The kolomto is the center of the yurt under the tunduk, where the hearth is located. The place in front of the juk is called tor, and the most honored place in the yurt. Only elderly people and guests of honor are offered a seat there, to the right of the tor is the women’s half of the yurt called epchi jak, and to the left is the men’s half of the yurt called er jak.

Tor is placed opposite to the door in front of the juk, where carpets, blankets, clothes, felt bales and pillows are put on chest or wooden stands. The floor near the juk was covered with colourful felt carpets: shyrdak, ala kiyiz, richly decorated with national ornaments.

Women’s part is the right half of the yurta, it is called epchi jak. It is divided from other sides with ashkana chiy, there are kept kitchen utensils:ayak kap,kookor, konochok, konok etc. The male half is called er jak it is the left part of the entrance where men kept their weapons, horse and hunting gear. Ulaga is the entrance, where usually stands saddle. 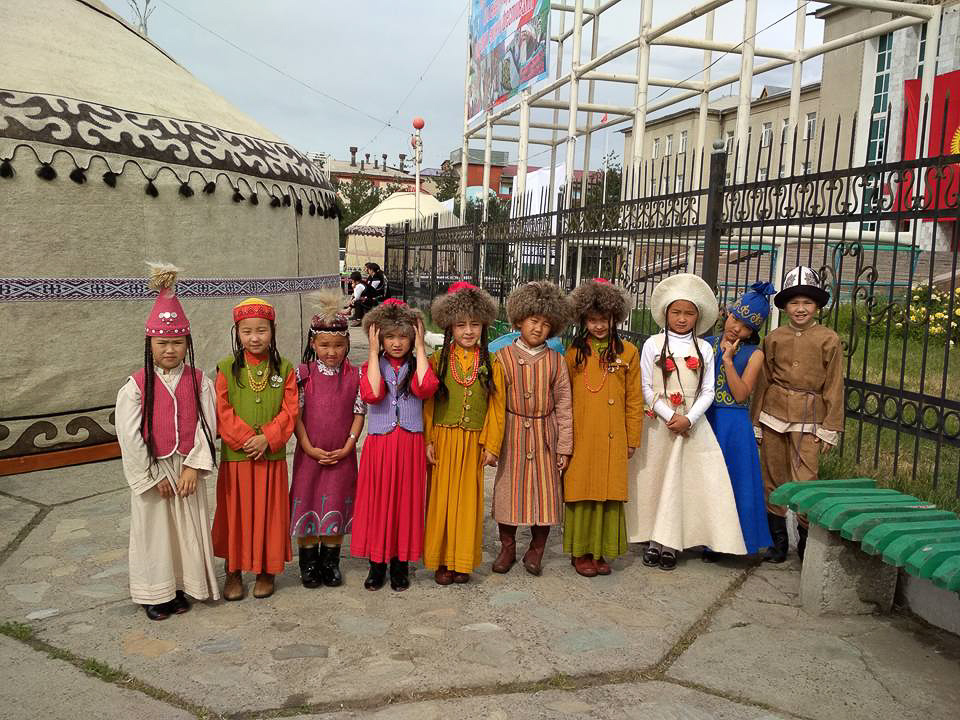 Decoration of the yurt

The yurt is divided into white and black house. In ancient times, poor people had a black house, and rich people had a white house. Rich people had several yurts (big, small, guest house, kitchen). They were richly decorated with national ornaments. For example the best wood craftsmen (jygach usta) carved and painted wooden part of yurt ( kerege and uuk) so masterfully, that it was equal to decorating shyrdak or ala kiyiz. All this created a rich fund of national patterns of our people, has become one of the sources of modern culture. Even the yurt has become a form of national art and architectural elements. And one of examples of it, the dance “Holiday in Kyrgyz land” of I.Moyiseev, in which it is shown the setting of yurt.

The places in yurt

Every place inside yurt was distributed in accordance with the way of life of nomads. It is mainly divided into five groups. Entrance, the two threshold sides of bosogo, called ulaga and kerege. This is the place of men, where they meet and see off guests. The right side is a women’s half, epchi jak, the left side is men’s half-er jak. The left is the men’s half of the yurt called er jak. The place in front of the juk is called tor, and is the most honored place in the yurt. Only elderly people and guests of honor are offered a seat there. The place between tor and epchi jak is a place of a young girl. Sitting there, she learned handicraft and listens to the conversation of elderly people she learned the secrets of life. The center of the yurt under the tunduk is called kolomto.

The structure of the yurt, making and decoration of every single part of yurt, location of subjects, pre definition of allocation of every person, all this shows that yurt was not just a dwelling, but it contains the whole culture and philosophy of kyrgyz people. 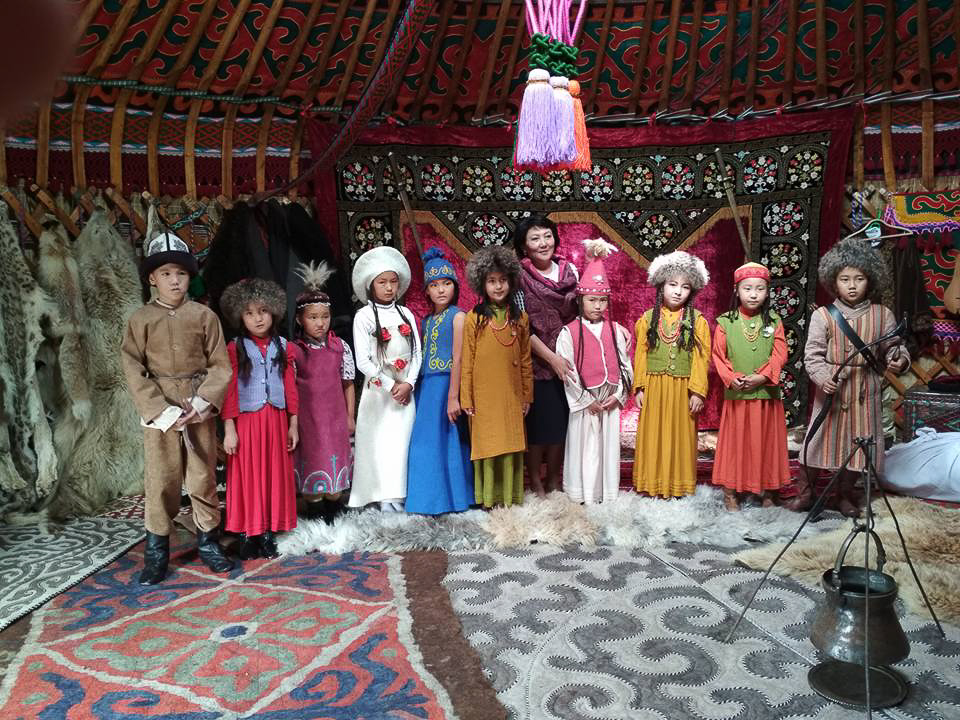 The ceremonies of the yurt

Nowadays certain rituals have not lost their significance. We do not ask to guest to give him dinner or not. We don’t point legs towards the hearth and Mecca, don’t put out the fire with water, don’t kick a door to open, don’t run around the yurt, sleep on top of the blankets, don’t count the stars, don’t point a door to west side, etc. Good wishes for the Kyrgyz yurt – Let the hearth not go out.

Issyk-Kul region is known as a tourist area, many tourists arrive here and astonished by views of nature and interested in yurt. Kyrgyz yurt is registered in the list of UNESCO’s as cultural heritage and introduce Kirghiz nation to the world. Yurts human livelihood, traditions, rituals sigh a great philosophical significance. Kyrgyz Traditional yurts, today recognized all over the world, not only in Central Asia, people can buy out up 200-300 yurts annually. 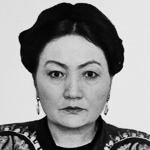 Alymkozhoeva Kүlүm Shamievna was born in 1959. She graduated from a teacher training college in the city of Karakol, then Kyrgyz StateUniversity named after Arabaev Faculty of Natural Sciences (arts and crafts). Her thesis was titled Kyrgyz National Yurt and its decoration. Since 2006, she was Head of the Craft (Craftsmen) Association of Issyk-Kul District and Director of Issyk-Kul State Historic Cultural Reserve Museum.

The world in a yurt
Waking up in Tuva