Know your weaver: The revival of Udupi sarees 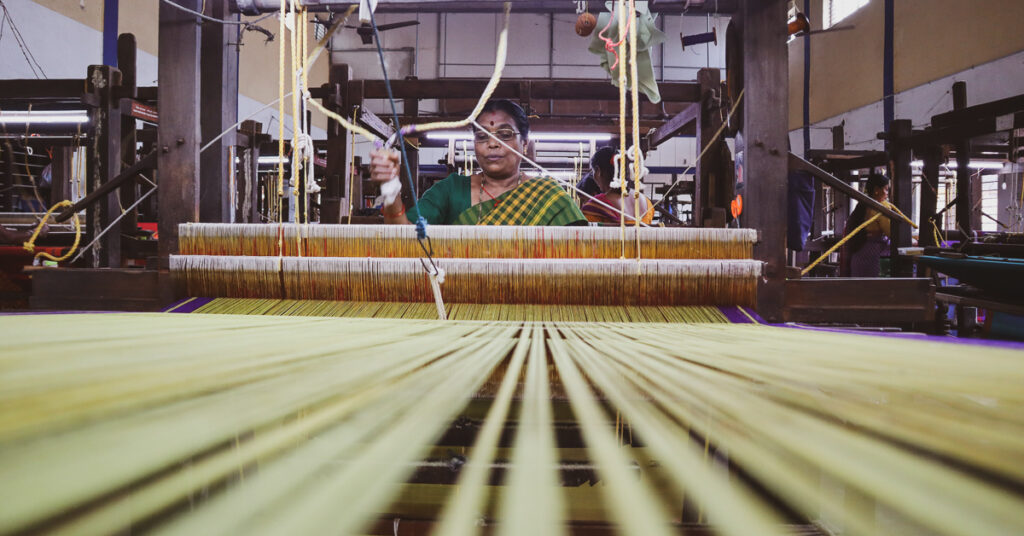 The tapestry that unfolds after being woven over a loom is a microcosmic representation of a culture, a process, and an illustration of a tradition. The weave, woven thread by thread over a loom, is the actualization of a man’s dream going through the rigours of chiselling through the choice of colors and illustrated as an eye-catching and heart-enduring spread, pulsating with liveliness interspersed with sweat and grime of the weaver, which adds a dab of realism to the product.

Karnataka is among the few major states in India where cotton is cultivated. In the northern part of the State of Karnataka, cotton is cultivated on a large scale, as it is endowed with black soil, providing the nurturing ground for cotton. Every year 0.8 billion bales of cotton are produced in Karnataka. Cotton cultivation has an element of historicity associated with the state and the tapestry of weaves unspooled through the looms also has its genesis from the eighth century AD.

Karnataka is amongst the most endowed states, as far as the diversified kind of loom-produced products available for the consumers is concerned. These products are mainly concentrated in saree weaving. Liveliness and vitality of this tradition are ensured through different kinds of sarees woven over the looms. The different kinds of sarees woven in Karnataka include Ilkal from Bagalkot, Patteda anchu–from Gadag which was woven in and around the villages of Gajendragarh, Belgaum, Raichur, Kodal, Bidar, Bellary, Gulbarga and Dharwad in tenth century AD, Mysore Silk which is a GI-tagged saree from Mysore district, Mokalmuru from Chitradurga and Udupi sarees from Udupi- the latest inclusion in the GI tag for sarees from Karnataka.

The Udupi saree is the latest variety that has obtained the Geographical Indication tag (in 2016). This story is an attempt to trace the process of revival of Udupi sarees and its placement in the saree market internationally as also at the national level. 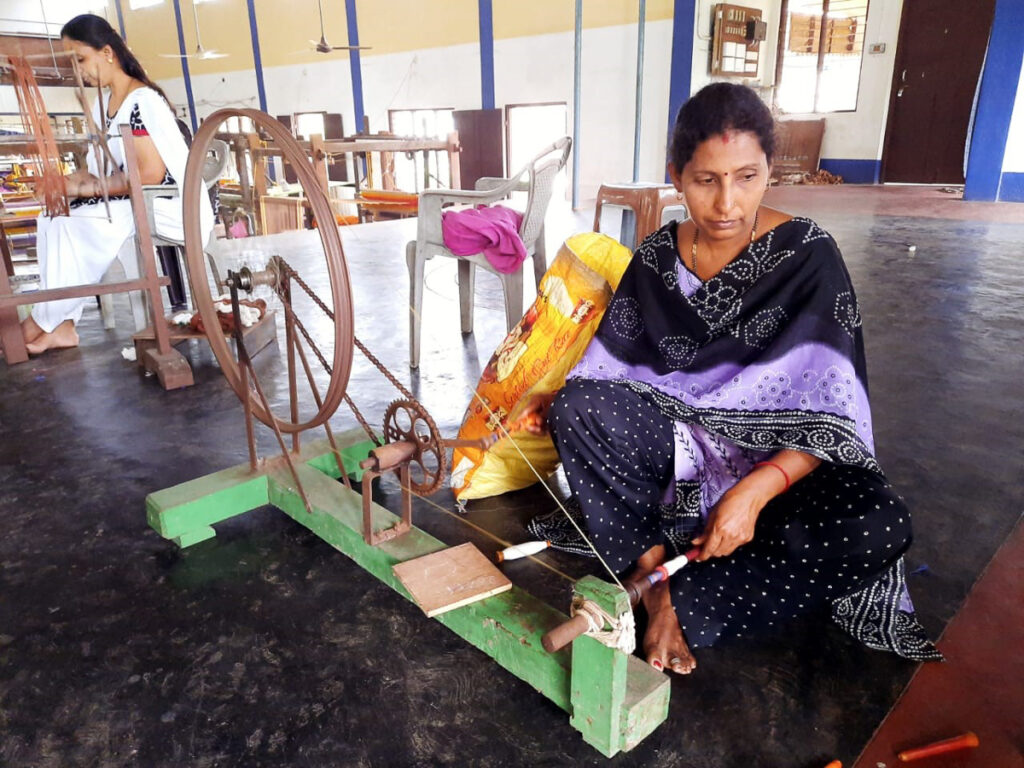 The advent of Kadike Trust around Udupi & Dakshina Kannada has catalyzed the process of revival of Udupi sarees along with the institutional support provided by NABARD (National Bank for Agriculture and Rural Development, the Apex level bank of India focused on agriculture and rural development).

The revival of Udupi sarees was engendered by focusing on the weavers who were weaving the Udupi sarees.  It was an attempt to revive the craft, as the tradition of weaving of Udupi sarees has a history of more than two hundred years. Weavers of Udupi sarees, it is believed, came to Udupi either from Tamil Nadu or Andhra Pradesh and they are referred to collectively either as the Padmashalis or the Shettigar community.

The decline of Udupi sarees began around the 1980s, and slowly it reached a point of extinction with only 42 weavers left to practice and continue to pursue the craft of weaving Udupi sarees. Such being the grim scenario, Kadike Trust Karkala a not for profit organization, in association with Talipady Weavers Society started  Udupi Saree  Revival  Project in the year 2018.

To revive the craft of weaving Udupi sarees, an element of innovation had to be incorporated to wean back the weavers who had adopted different job works. It was attempted through the initiative-Know your weaver– by the Kadike Trust. 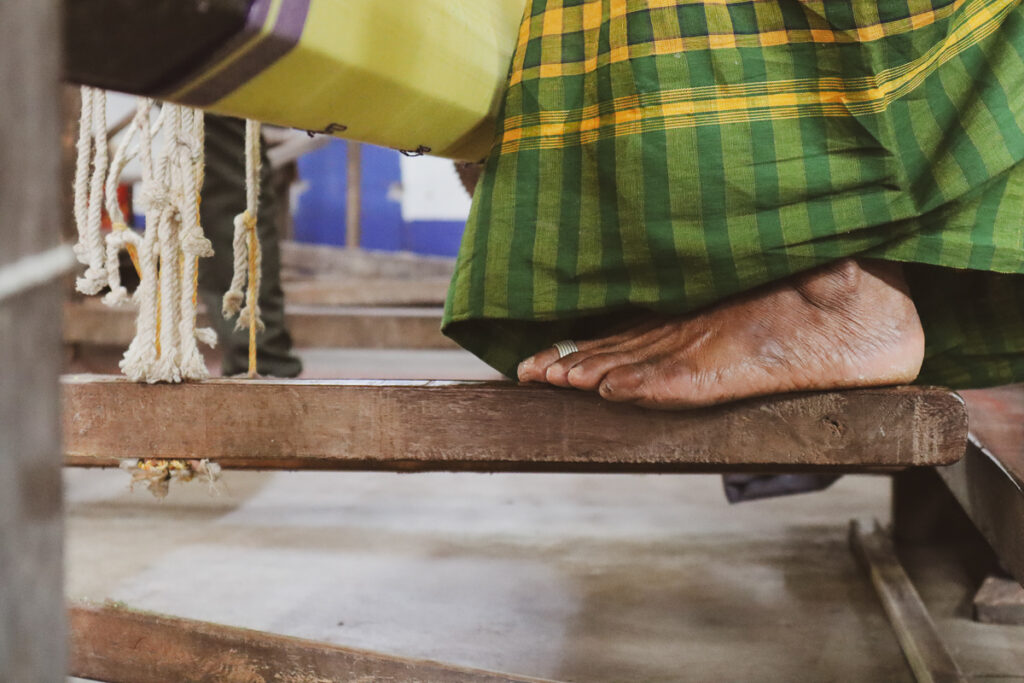 Weavers otherwise are a faceless entity, but through the intervention of Kadike Trust, every saree woven has henceforth carried a picture and the profile of the weaver as well. The customers, especially those belonging to the Diaspora as they get an organic link through the weaver to the motherland, lapped up this initiative.

Apart from connecting customers with the weavers, this initiative also umbilically created a sense of belongingness about the craft among the Diaspora and they started getting customized products by linking with the weavers.

This being the age of social media, and the positive inclination of the diaspora to link with the motherland and its associated events, Kadike Trust also created a Facebook page of Udupi sarees and was able to have an organic linkage with the aficionados of Udupi sarees spread on the map of the country as also those who have branched out to different corners of the world.

Green shoots of revival were initiated but to sustain the growth and inject diversity into the momentum, traction in the form of institutional support became the need of the hour. Institutional support was imperative to create a diversified pool of weavers that would culminate in a more robust product line.

Kadike Trust got institutional support from NABARD through their SDP ( Skill Development Programme)  a specialized training programme that focused on imparting skill-based training factoring in the requirements of the market and ensuring continuity by engaging master craftsmen in 2020.

As a part of the SDP, 10 weavers were provided intensive training. An indirect outcome of this training programme was women from the nearby villages, some of whom hitherto were not associated with this craft also evinced desire to learn the skill of weaving.

The biggest benefit of the institutional support in the form of SDP by NABARD has been that the younger generation, which had moved away from the family heritage and strength of weaving, has started getting associated with weaving once again.

To give a perspective, before the training programme, the majority of weaving was undertaken by weavers above 60 years of age but now the age profile of the weavers has a range from 30-60 years.

Udupi sarees have GI tag (geographical indication tag) for their unique features and these sarees are woven over Malabar frame looms in Udupi and Dakshina Kannada. The intervention of NABARD to revive this craft was not only limited to providing training through SDP, but NABARD also provided additional marketing support for these sarees through a  global online event,  and it connected the diaspora from Udupi through nostalgia. The social media event provided a major fillip in expanding the outreach of Udupi sarees.

Factoring in the awareness created for environment conducive products being demanded by the young generation, Kadike Trust has also introduced natural colors as a part of its revival efforts and adapting to the emerging marketing dynamics.

Recognizing the work done by the Kadike Trust, Mammies School House based out of Canada which encourages the use of natural colors and fibres in the weave,  has instituted scholarships for Mamatha Rai, President Kadike Trust.  Only two agencies were selected internationally for the first program introduced in 2021 and Kadike Trust is one of the agencies.

A good life, in the end, is a semi-finished product spread out over a loom with threads in the form of days being added to the weave, threads symbolizing energy and struggle of life, the essence so to say.

Before the intervention of Kadike Trust for the revival of Udupi sarees and subsequent hand-holding provided by NABARD through its SDP, only eight weavers were left practicing this craft at Talipady Society and 45 in two districts, but after the handholding of NABARD and Kadike Trust, the number of weavers has increased more than 5 fold to 34 at Talipady out of which 18 weavers were trained with the support from the NABARD. In twin Districts of Udupi and Dakshina Kannada, the total number of weavers has now increased to 74. The biggest redeeming point of NABARD intervention has been that youngsters who had moved away from the looms have started warming up to the music of the cluttering bases of the loom.

Udupi down South is one of the most revered towns amongst the Hindus for the icon of Lord Krishna. For the Talipadi Weavers, it is a matter of pride that the little Lord Krishna wears the six-meter of yarn woven and dyed in organic natural colors by the weavers of the society when he sports the Lakshmi Roopa or the form for the first time in the history of Udupi Sarees.

Crafts and practices have survived and thrived because of State patronage for eons. In modern times, such state patronage manifests in the form of handholding provided by institutions like NABARD to preserve, conserve, diversify and facilitate the modernization of the craft in tune with the requirements of the time.

Support provided by NABARD has helped Kadike Trust in bringing back the past glory of this indigenous art form. Kadike Trust was conferred with a national award as one of the best NGOs associated with NABARD in handloom sector- 2021 by NABARD  Head Office.

Udupi Saree Weaving is one of the finest examples of eco-friendly rural livelihood opportunity, which creates employment opportunities for rural youngsters at their doorstep and facilitates ebbing the migration to the urban metropolis. Such kinds of initiatives of revival need to be encouraged by conscious buyers as it would also facilitate fostering self-sustaining rural livelihood by using and pre-booking Udupi Sarees and other handloom products. After all, it is one of those products which traces its journey from nature and goes back to the soil, fully decomposed leaving no carbon footprints. 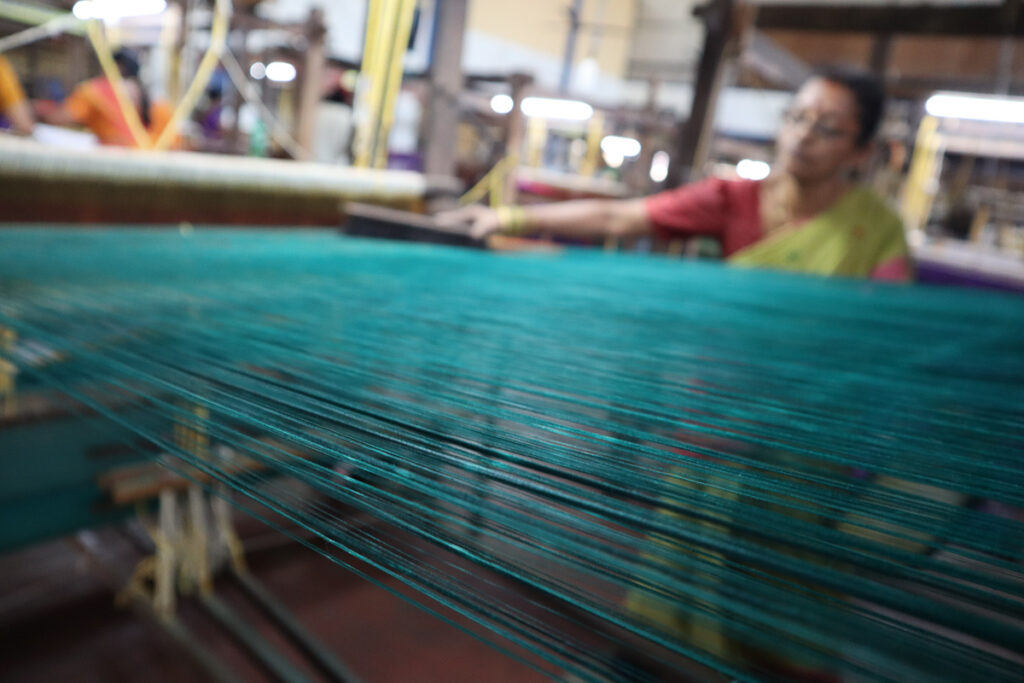 Weaving has a tradition of 4500 years in India. Udupi Sarees are one of the finest examples of this tradition. These delicate looking but sturdy sarees last for generations together and later used as bed spreads,  soft baby wraps and kitchen towels before being decomposed and has almost zero carbon footprint. Udupi Sarees are made with the finest single ply pure cotton yarns and dyed locally in soothing colors.

Udupi Sarees are woven in the geographical region of Dakshina Kannada and Udupi districts of  Coastal Karnataka.  Sarees are woven using fine 40, 60 and  80  count single ply combed cotton yarns and has a very long life.

Udupi sarees are woven using Malabar frame loom introduced by Basel Mission. The  Sarees have plain or checkered designs on the body with contrasting colors on pallu and border.  Unique practices like dyeing pallu portions of the entire warp of the saree in the dark shade after preparing the warp, applying starch on the loom while weaving, using the cut border technique to weave checkered sarees, and weaving motifs using extra weft technique are some unique features which brought Udupi saree GI tag in 2016. Production of Sarees is carried out at Five weavers Societies: Udupi, Shivali, Brahmavara, Padupanamboor and Talipady and a KHDC unit.