Julie Walker – We used to come down by the river 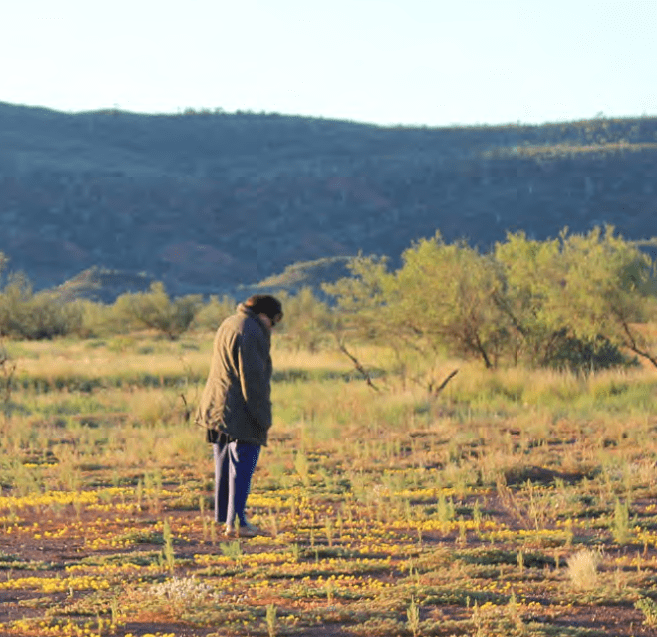 Kurlkayima Ngatha – Remember Me is a West Australian exhibition exploring links between botany, land and cultural identity. A collaboration between FORM and IBN Corporation, the Yinhawangka, Nyiyaparli and Banyjima people. This exhibition has revealed an extraordinary depth of knowledge about nature and the land that is sustained by the Aboriginal peoples in the Pilbara. This extract from their catalogue from Julie Walker, who shares her knowledge of the bush medicines in the Ashburton area.

My Aboriginal father worked around the Ashburton River basin area at the station, his whitefella or station name was Ashburton Tommy. The Ashburton River is known as the Mindurra to Aboriginal people. Mindurra flows all the way through to the Onslow coast. The Seven Mile Creek (Binbidnha) further up near Paraburdoo flows into this river as does Turee Creek (Thurri) and the Angelo River (Yirdibirdi) at the top end (Gubawara). These names are all in the Yinhawangka language. You can see little nyimari finches around here—there is a story that said if you see a nyimari, water will be close. The river used to run flowing, nearly every year, but this is the first time, in a long time that there has been an ongoing flow.

We used to come down to the river during time off when we lived on the Ashburton Downs Station as it’s just a little way from our camp. We used to have a corroboree and dancing at a place further up the bank. It has changed now. There used to be two separate pools, one side is this yinda side, and we wouldn’t go there, used to swim and fish over the other side near the old bridge. Catch gulhamba (fresh water trout) and binhthara (fresh water eel). Fresh water eels live in the mud.

But the river has changed and you don’t see fresh water eels anymore. Old people used to make nets to catch the eel from grasses, they would knit it like a netting and would stand up with a net on one side and then they would rattle the net and put their spears into the net. At Seven Mile they used to catch bony fish, there was a big mob of bulrushes which they would use to trap them up. They would train up the young people to use spears in the water, they used to use those bulrushes now [to trap the fish] to spear them fishes.

Also, they used to grind up a grass that became like a soap and this would stun them [the bony fish] with a poison, they would peel the grass and use the stem part which would be ground on a large rock. The plants that people use up and down the river that I remember are the bajila tree as it grows everywhere and is the main food for the bush turkey. It is green and shaped like a football, but when ripe turns yellow and the flesh is red, you can put the whole thing in your mouth, but you don’t eat the seeds, you spit them out. Turkeys eat the whole thing because you can see the seeds in their stomach when you open them up. To trap a bush turkey the old people would dig a hole underneath the tree, make a grid on top with sticks and cover this with a light wind grass – then the bush turkey will fall into the hole.

When I was growing up here bajila was the main bush fruit around the Mindurra river, but occasionally you might get bush honey marliya or jandaru. Old brother Kooline Mick used to ride on horseback to the Angelo River at the Wanyanha Junction to collect bush honey and bring it back. You still can see the scar tree from where he got the honey. Another place some way from here is Secret Creek, which used to be a secret army camp near the Beasley Pinnacles. This is the place where the gulyu sweet potato grows.

Film stills by cinematographer Giovanni C. Lorusso in the Pilbara, 2015.

Film stills by cinematographer Giovanni C. Lorusso in the Pilbara, 2015.

There is a big plantation of gulyu down by Secret Creek but it doesn’t come down this far. There are two different sorts of sweet potato, one with the purple flower and one that is a more brown and yam like. On the bank of the river you see tea tree as well, which, was ground and boiled for medicine, mainly to bathe in and smell the steam, as it clears the nasal and sinuses and is good for colds and respiratory problems. Mum used this when it’s cold to wash sheets and blankets for us kids so we have a good sleep, because the smell stays in the blanket. They would boil it in the old boiler at the station with the wooden heater. Boiled up babies’ clothes as well if they had a cold.

They used the leaf mainly and the new growth where it is still soft because it is easier to smash and grind it up. They used this for the bough shed too, as the gum tree leaf gets dry too quickly and this is not spinifex country, so they would make it with tea tree. It would help to keep the shed cool; they would put a pipe up the top with holes and the water drips down. We would get the mardawud sap from the paperbark and some gum trees over on the other side of the bank. Some people drink this for when they are not well, like an aspirin, it thins people’s blood. We never went to the doctor when we was little, just grew up with bush medicine. Jami is a plant also used for bush medicine for colds and sinus problems and is really strong and sticky, it has a little purple flower. Clears the head when you have a headache, cold or congestion. When we were children, we learnt to look for a certain, smoky tree as that’s where we’d know there was a soak with clean drinking water. We’d bring a billy to collect the clean water which would be approximately four feet down, at first it looks soapy and you’d dig until the water is clean, then let it refill for the morning. The soil acts like a filter.

Just up from the Ashburton River bank is where my Grandfather is buried. He passed away on Christmas Day in 1965. We made a stretcher with two sticks and a blanket, then buried him under a willow tree. We cut his hair and used this as a spinning jenny to spin the hair and wrapped it round a spear and sent his hair back to Yinjibardi country and buried the hair there. The spinning jenny is made from a plant with a yellow flower, it looks like a cross, one stick is long and another one is shorter and they spin it and it makes the hair belt. In those day, people just got buried where they passed away. Mum and my aunties got his body ready for burial, rub him with red ochre, wash his body, and wrap him like a mummy in a sheet. The grave has to be clean all the time, so when people walking along and see something in the clearing they know that it is probably a grave. They also have to be under the shade of a tree, or in a malu.