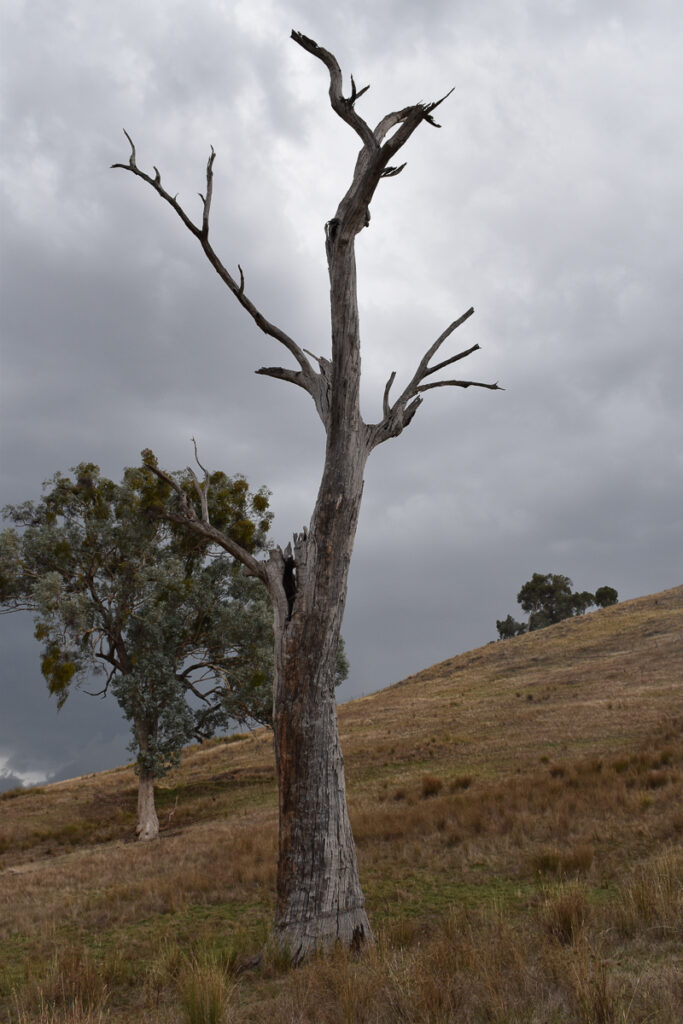 Cara Johnson makes adornment that embodies the complex settler entanglement with the land.

“Ringbarking is the circular frilling of the bark of a tree with overlapping axe cuts into the sapwood. The crown dies slowly over a couple of years but since eucalypts have astonishing defences against accident, many ringbarked trees sucker from the base. So the ringbarkers have to be followed up two or three times while the tops are dying by sucker bashes swinging their axes upside down to knock off any new shoots.”

The line the axe draws around the base of a ringbarked tree remains for many years after the tree has died, sitting around waist height, a metre or so up from the ground. Over time the bark rots and falls away and returns to the ground, exposing the sapwood, which greys and hardens with weather. The deep cut burnishes with sun and wind and rain, becoming a seam worn by the old tree, like jewellery.

To ringbark a tree one must face it, completely. You need to stand right up close to the trunk to ensure the full force of each blow is received. I imagine the ringbarkers would have smelt a woody wet eucalyptus sting up their nose.

For a while, I sat with the ringbarked lines until I began to understand that it was the axe and the axe-cut that was of interest to me. The inflicted line and tool that carved it. The ringbarking axe represents a point of connection between the human and the tree, like a hinge tethering the two together. Its sharpened steel blade cannot inflict damage without the brute force of the wielder. The axe is just the in-between. 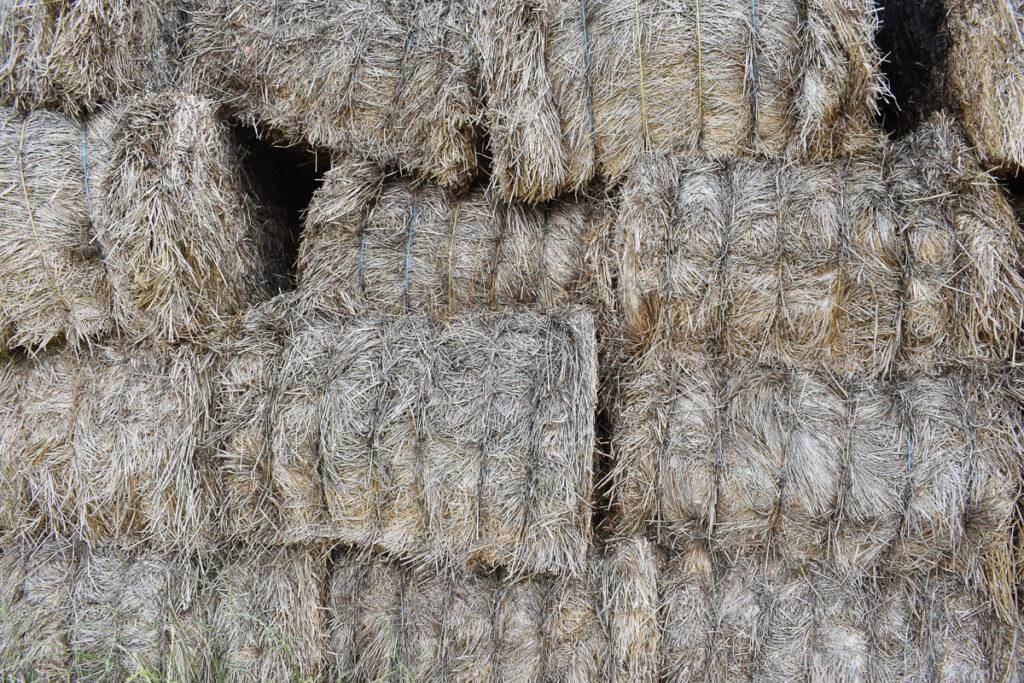 I also came to recognise the ringbark line as symbolic of a heavy-handed line, which I observed over and over, in slightly shifted forms. In fencelines that harshly portioned off the boundaries of pastoral land. In harvest lines that stretched out past where I could see, and in orderly, stacked bales of hay sitting in emptied paddocks. This heavy sort of line also emerges through the unnaturally neat rows of trees in shelterbelts on farms, that have been planted in an attempt to lessen winds that whip across cleared ground.

This sort of line is instantly recognisable as being a marker of a particular type of human presence, where lines are inflicted upon a place rather than informed by it. These straight, brutal lines all share providence in western agricultural values and although they differ in form, they’re derived from the same intentions. 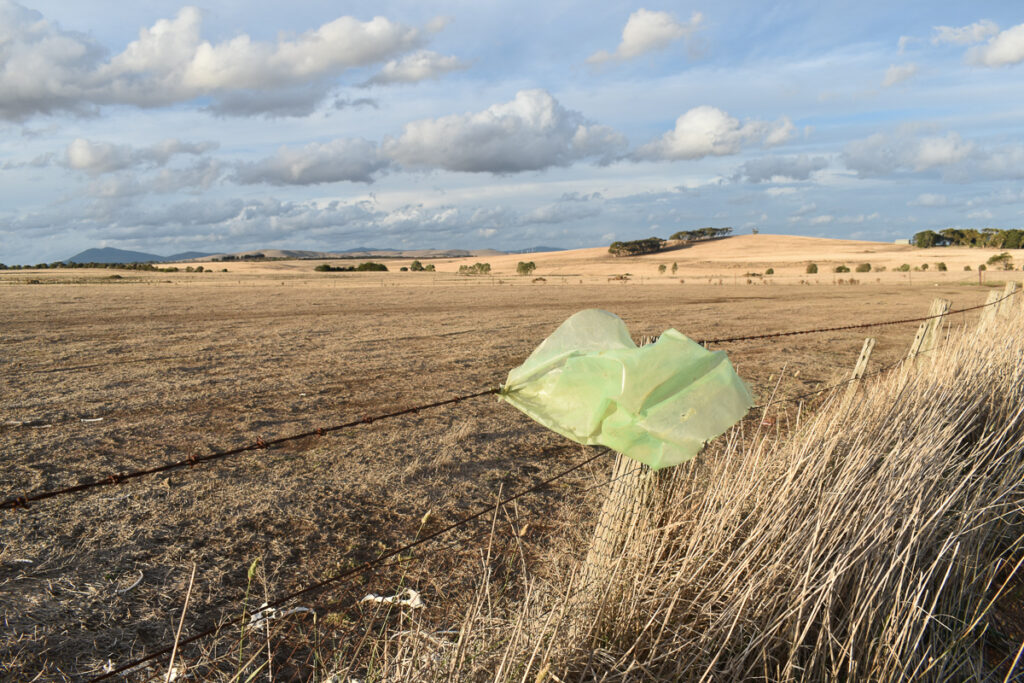 Tree guards are complicated. They are little transparent socks for trees, to keep them safe. A plastic sigh of relief, an “‘everything is going to be ok’” because we planted some trees.  How strange to have to house a sapling in a plastic bag. They are a marker of desperation, “‘grow tree grow!”’, and of longing to somehow go back and un-log and un-clear. But we can’t go back, and so now we have tree guards, little signifiers of hope standing in rows along freeways, protecting tiny trees.

Tree planting is a desperate scramble to fix the unfixable. An attempt to remediate the damage caused by land clearing.

The wettest months are the best for planting. Tiny seedlings hide from the wind in luminous plastic, which looks odd against the grey sky, and muddy ground. Rows and rows and rows of neat little trees, like stitches trying to mend the cleared patch of land. If they survive winter and get their roots down, and if the summer’s not too hot that year, they might make it. It is possible that they’ll become a big tree. 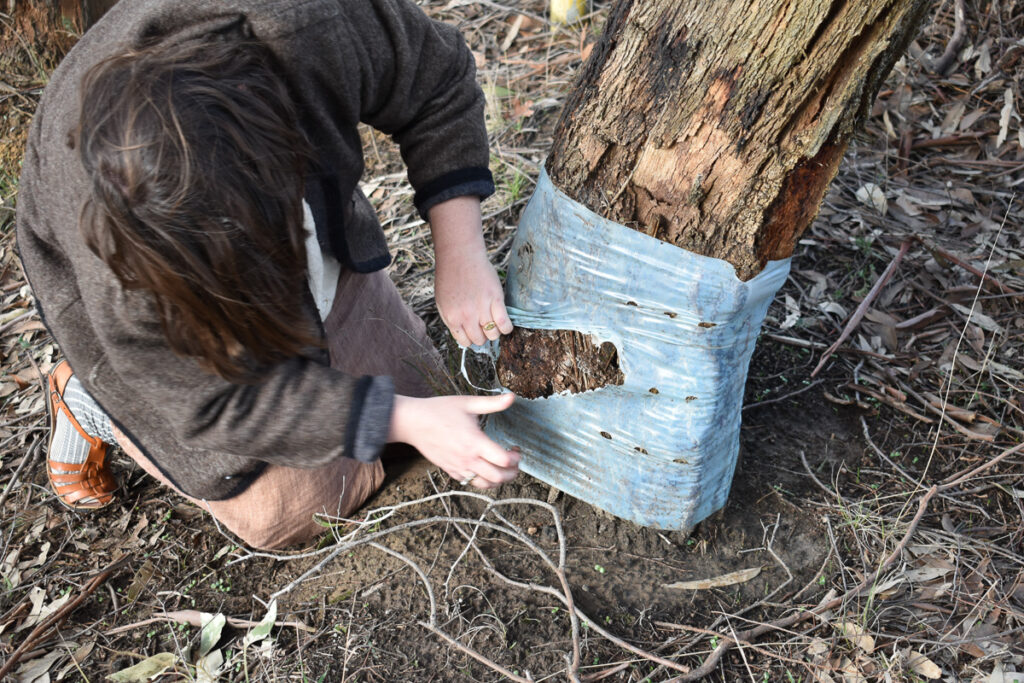 A tree ready to be planted isn’t really much of a tree at all, just a little seedling with maybe half a dozen leaves housed in a small black plastic pot. When placed in the ground the tiny seedling is vulnerable, still with only a shallow root system. In an effort to give it a good chance of survival a protective guard is placed around it and held there with a wooden stake.

The tree guard only needs to stay around the tree for maybe two seasons, until the roots establish and the crown emerges from the top. But, it’s not unusual to find tree guards caught in the undergrowth as rubbish or floating in a dam or creek. The guards often remain around the base of the tree as it matures, long forgotten by the hands that planted it, and if enough years pass a tree guard can slowly ringbark the tree it was protecting, as the trunk tries to outgrow its confines. 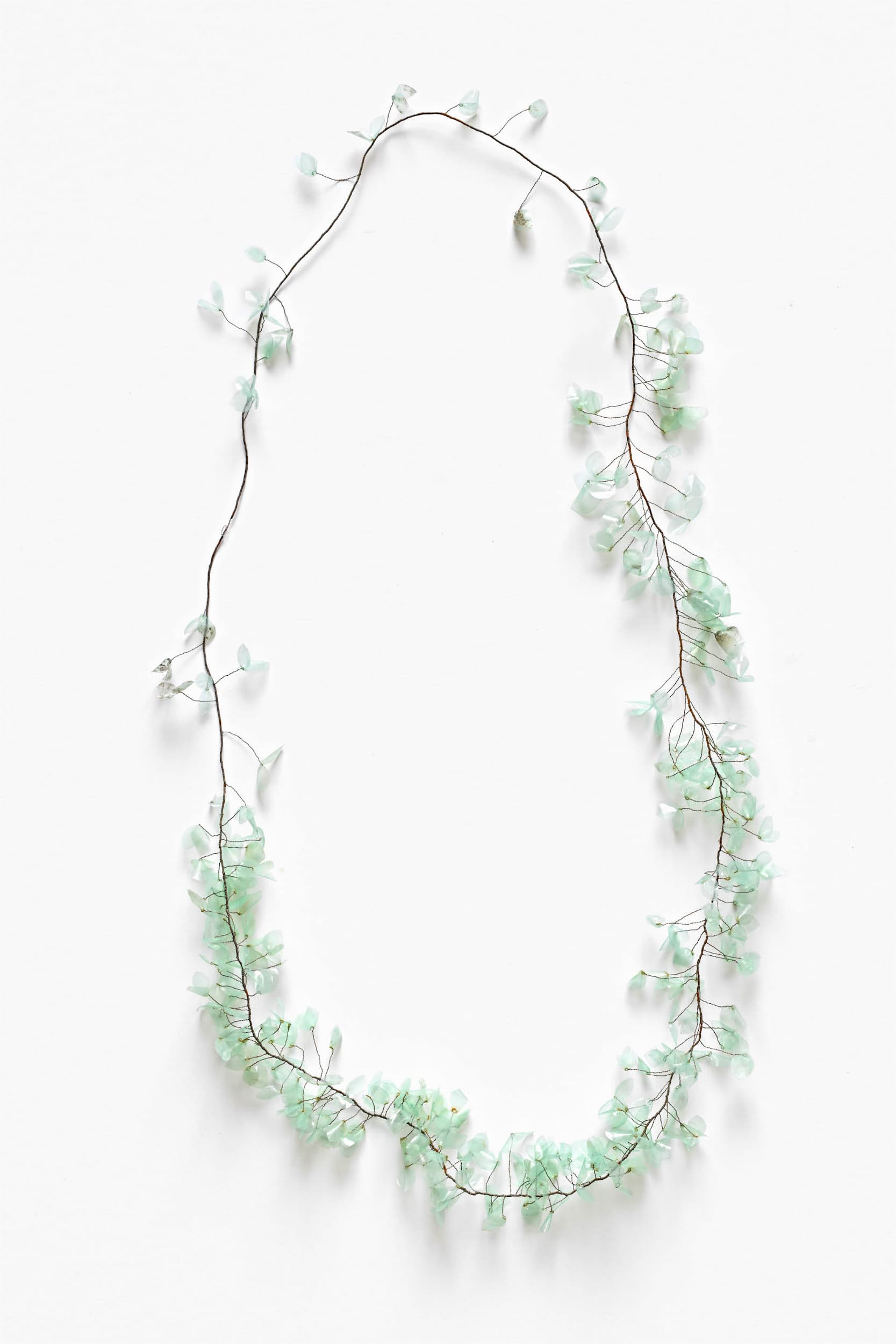 Tree guards and the ringbarking line are linked, not only in the ways that both trace the circumference of a tree (with one leading to its death and the other to its possible growth and life) but also in that both can be understood as representations of control. The ringbark line controls what lives, and the tree guard controls what lives, and where.

From a forgotten plastic tree guard that I found stuck around the base of a tree, I cut hundreds of small, leafy shapes. Then, using a fine iron wire (jeweller’s binding wire) I gave each of the tree guard leaves a stem, and wound and linked the leaf components together to create a continuous, linear whole work. The piece references a neckpiece, and it has a tiny (but impractical) hook and eye to secure the ends together. Its exaggerated scale would make wearing uncomfortable and awkward, which is deliberate. Through this work (Tether) I was thinking about returning materials, through form and essence, while drawing on the conflicts held within the tree guard material. I also used iron, a material I draw upon often, for its reference to fencelines and agricultural practice. 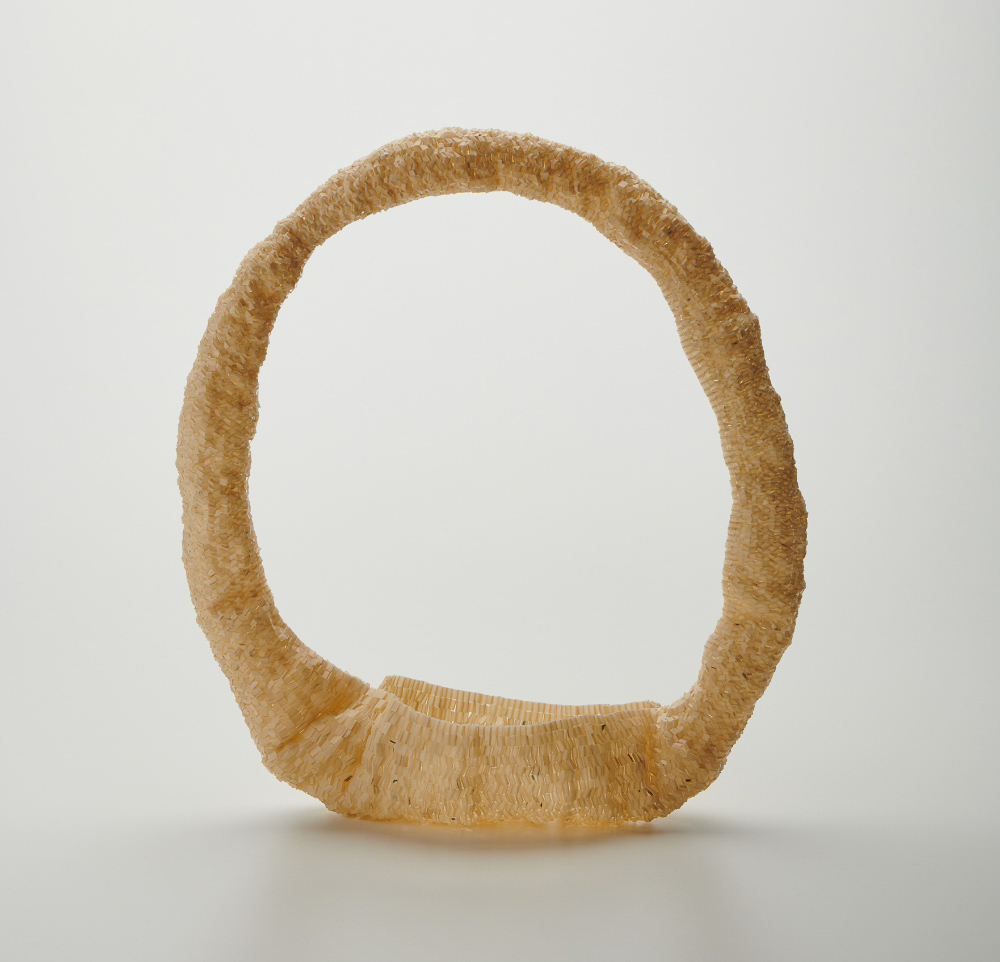 I found another type of tree guard hugging some weedy grasses that had grown into the triangle shape of their home. The weeds must have moved in once the sapling inside had died, and as I peeked into the surrounding guards I found that most of the other trees from that planting hadn’t survived. Perhaps it was the competition with unrelenting pasture grasses that made establishment too difficult, or maybe it was because this area wasn’t previously wooded but a vast grassland, so trees weren’t meant to be here to begin with.

This guard was the first of its kind that I’d come across, it was a faded warm creamy colour that reminded me of bone.  From it, I cut thousands and thousands of tiny beads and then began to piece them back together using an unravelled silage net (another agricultural reference) as a thread. I was trying to make a vessel for wearing, or carrying, and as I worked, I allowed the form to emerge.

Once complete I wove its ends into one another, which made it unclear where I had begun and where I’d finished, even to me. When light shines through you can see dirt and grime that’s built up on the guard from the time it spent in the weather, and some sections are transparent and pale, having faded from the sun. Through this work, Hollow, I was contemplating the incomprehensible scale and brutality of land clearing while trying to remain hopeful for some semblance of repair. Hollow cradles these tensions, while holding within it my own complicated grief, and despair.

A Million Wild Acres: 200 Years of Man and an Australian Forest, Eric Rolls 1981

The Bush: Travels in the Heart of Australia, Don Watson, 2014 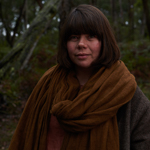 Cara Johnson’s craft-based works interrogate tensions and narratives surrounding land use. She completed a Bachelor of Fine Art (First Class Hons.) at RMIT University in 2016, where she is also a current PhD Candidate and sessional lecturer. Recent solo exhibitions include Understory at the Royal Botanic Gardens Victoria and Three Trees at Craft. Cara has also exhibited in widely in groups shows, nationally and internationally, notably Paper Art 2017 at CODA Museum in the Netherlands and at Gallery Funaki in Melbourne. This year she was selected for Schmuck 2021 and is represented in the upcoming Woollahrah Small Sculpture Prize in Sydney. Cara has works held in various public and private collections, including the National Gallery of Victoria.“I acknowledge, with sincere respect, that I spend my days on the lands of Traditional Custodians, the Gadubanud and Wadawurrung.”