Yarn ni Yatra: Crafts as a board game 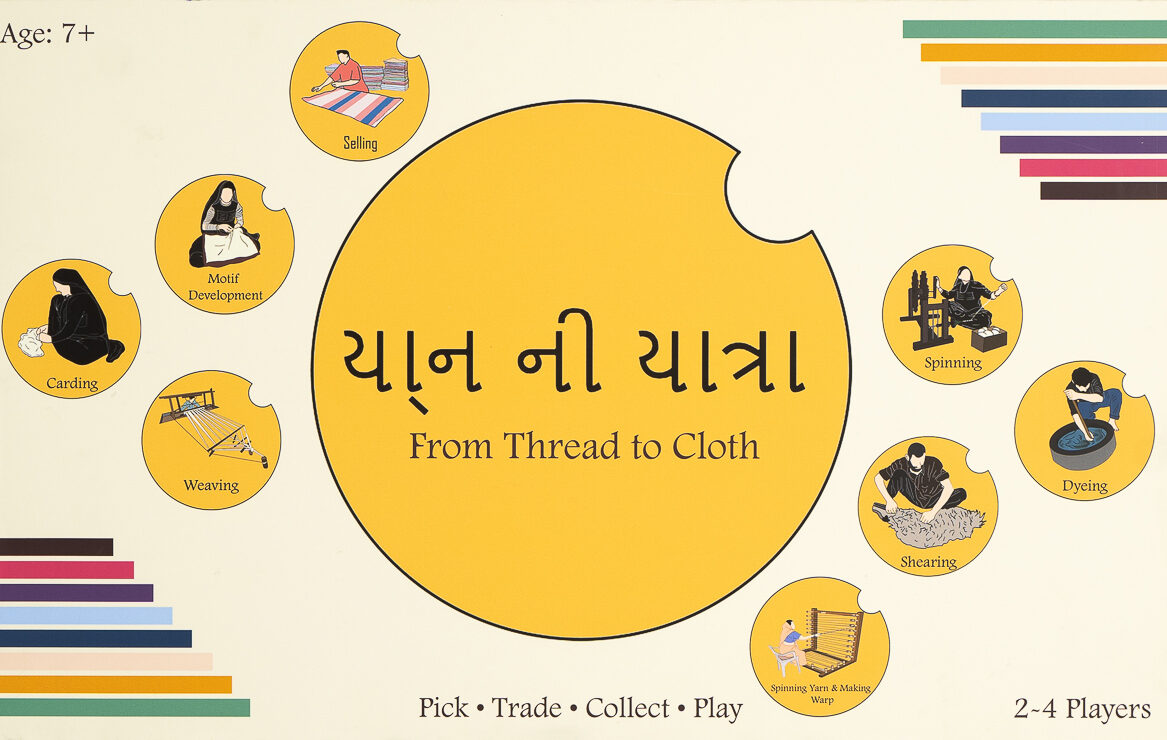 Mridushi Singhal explains the rules of the beautiful board game she designed to understand the craft cultures of Kutch.

✿ What gave you the idea of this specific game?

We visited the craft clusters of Kutch, including Bhujodi, Ajrakhpur, Mota Vernora, Gundiyali, Hunnarshala, and LLDC, as part of our studio curriculum, guided by Jay sir and our TA, Kamna Vyas. The photographs, videos, and outcomes from the field visit can be viewed on Threads of Innovation’s Instagram account, which can be found at @threadsofinnovation.

We learned about wool spinning and weaving at the Mota Vernora village, and through further interaction with the artisans, I discovered that gender plays a significant role in the craft and its process. Some activities are only performed by men, some only by women, while others are performed by both. We completed hands-on work with the artisans, which allowed me to have a better understanding of their roles. As a result, I used the central idea of “Bhumika”, the role of gender, throughout my work.

After learning more about the wool craft, I discovered that the technique and stages are extremely important. As a result, I created my game Yarn Ni Yatra based on the stages of the craft and the business that revolves around it, while also considering the gender aspect. As a result, Yarn Ni Yatra teaches children about the stages of the craft, the resources required, and the business involved, as well as the role played by both genders in the craft. It demonstrates that both genders are equally vital in the craft. 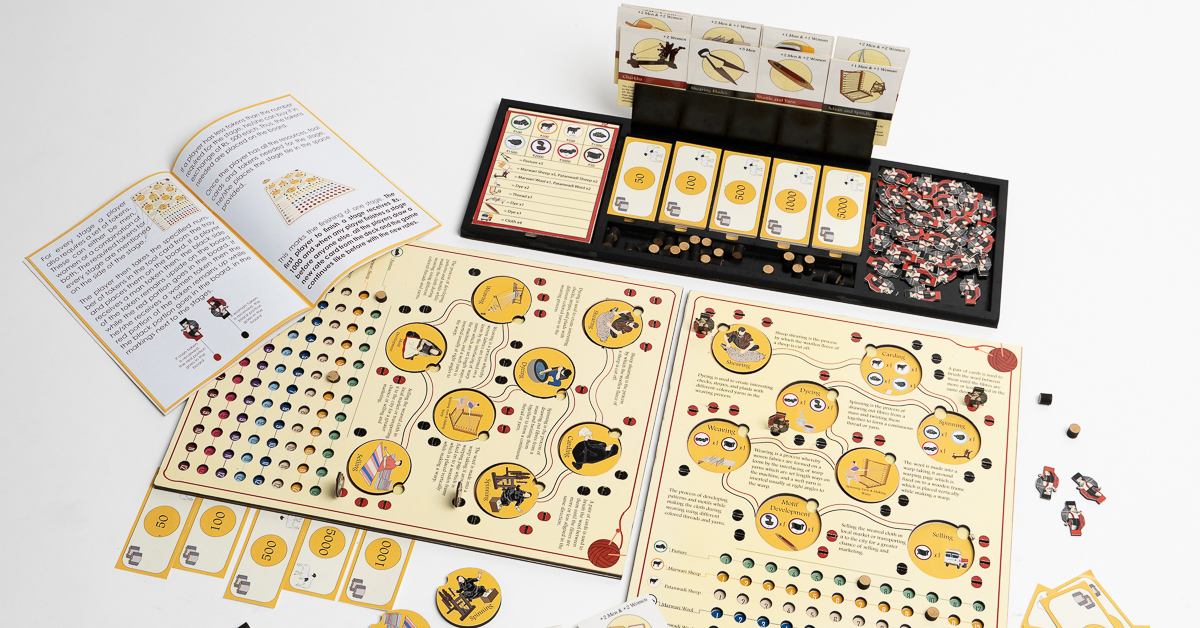 ✿ Have you had a chance to play it? What has it been like?

We tested the game with children aged 7 to 10 years old in Ahmedabad’s Khoj museum once it was completed. The children were really enthusiastic to play the game because it is tied to business and centres around trading and exchange. The game’s trading helped students comprehend how trading works in the craft, and the brief descriptions of each activity helped them learn more about the skill. The game proved to be rather captivating because the kids were determined to complete all eight stages of the craft and consequently played for hours. The thematic booklet also assisted them in learning more about the craft in depth, thus imparting to children the much-needed knowledge of the craft

✿ How would you like this game to be played?

The game begins with each player receiving a certain amount of money as well as one rate card. The players then proceed to purchase resources based on the rates listed on their cards. Due to the fact that all cards have varying rates, trading is an important part of the game. Tool cards are purchased in exchange for resources after all of the requisite resources have been collected, and these tool cards also offer gender tokens. When a player has all of the resources, tool cards, and tokens required for a stage, he or she takes the stage tile and places it on the board, marking the stage’s completion. As a result, the game’s purpose is to complete all eight stages of the craft with the given sum of money. This is a clear link between the game and the actual business of the craft, as finances play a significant part.

Since Kutch’s craft clusters are dwindling due to large-scale machine manufacture, passing on information about these crafts is critical to their survival. People need to be taught about the techniques and effort involved in these crafts, and they need to be encouraged. As a result, by putting these games in the curriculum of every school in India, they might serve as a medium for learning about the crafts. This would not only promote the crafts, but would also provide children with an understanding of the craft and the trading world. 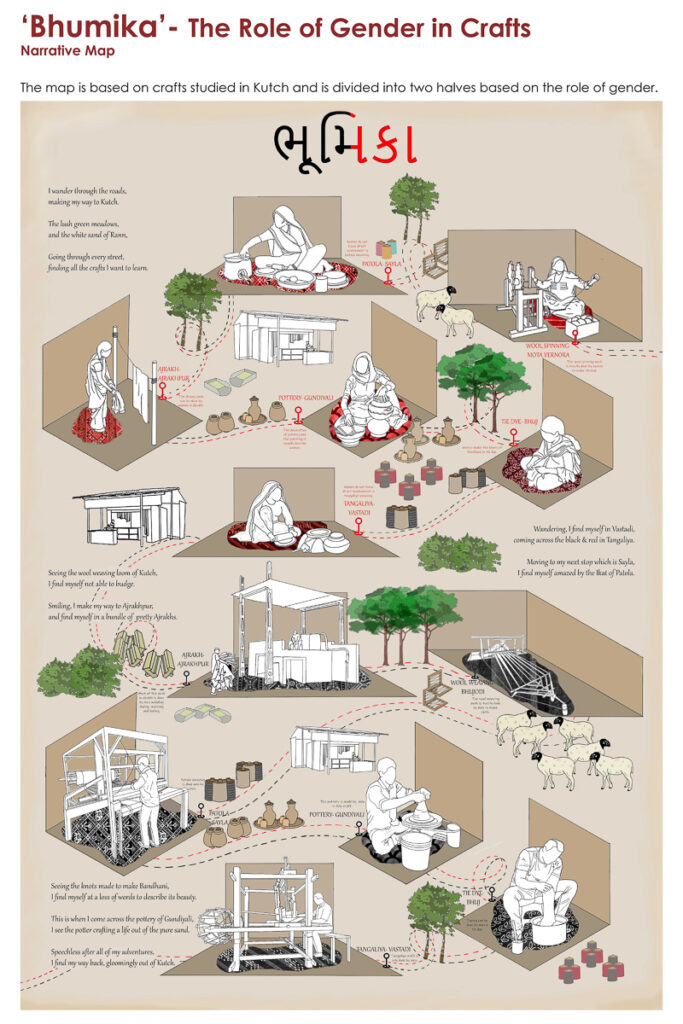 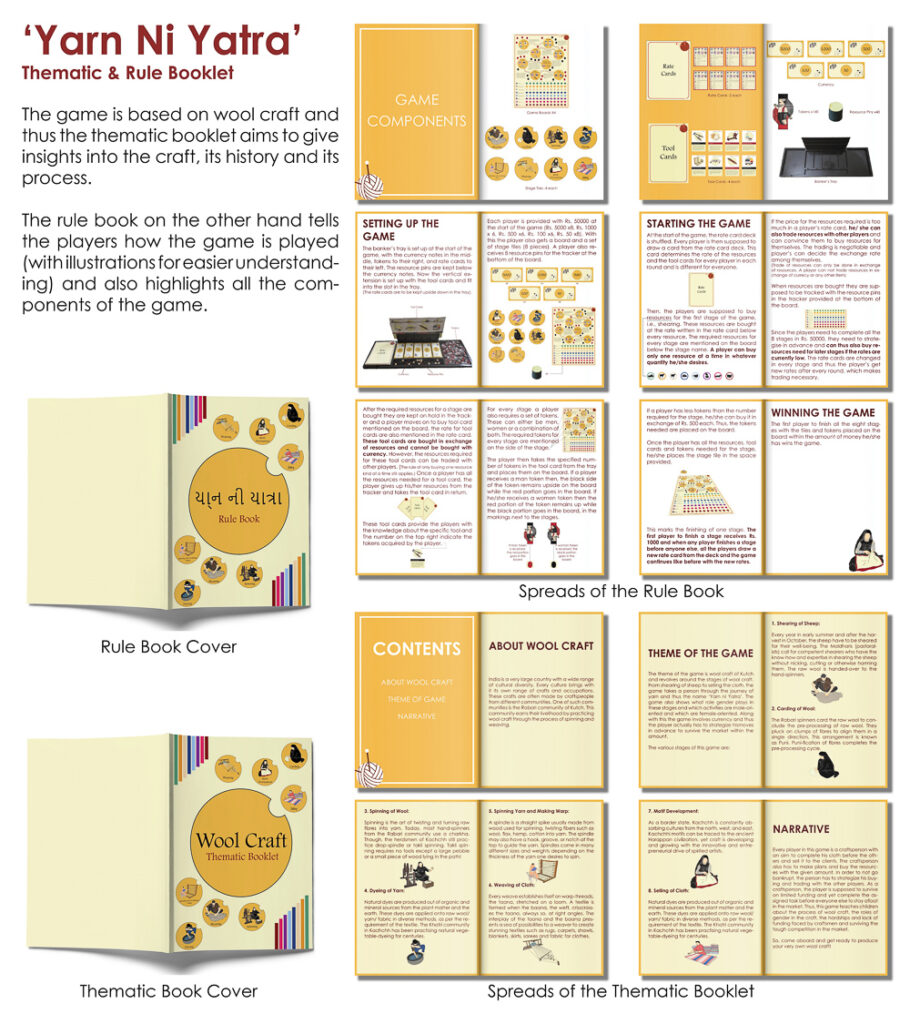 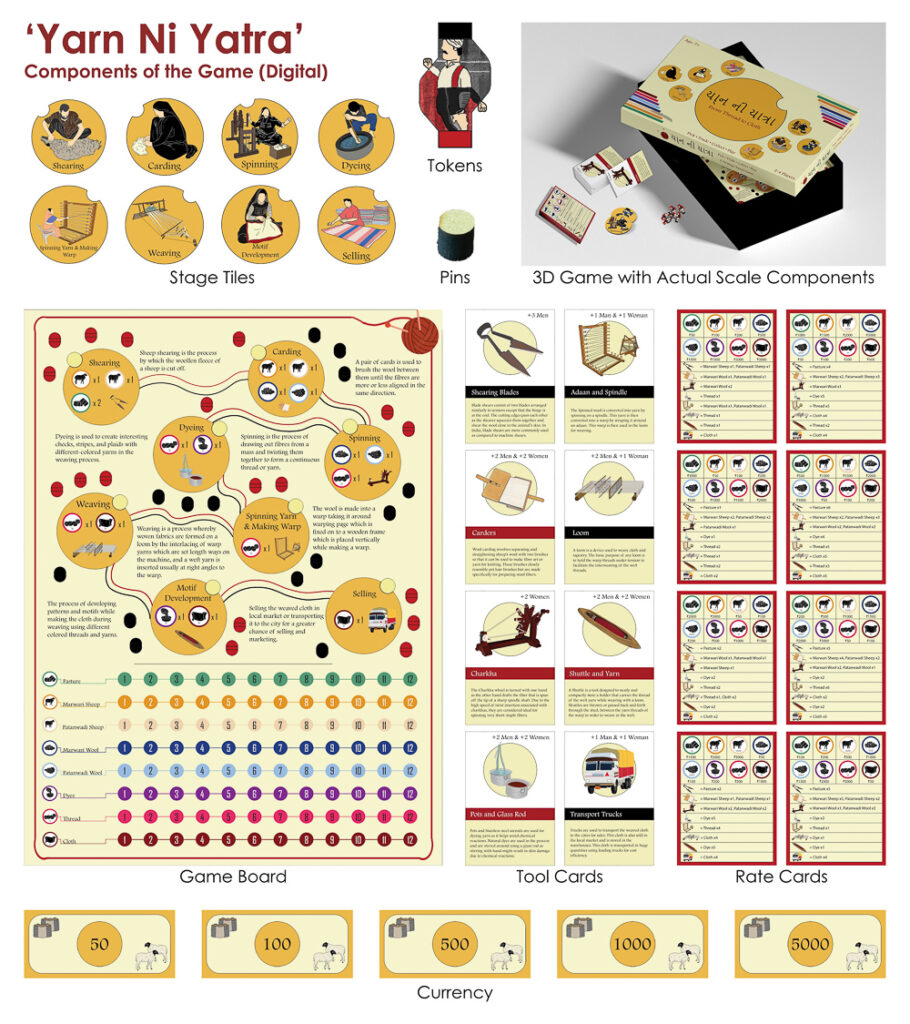 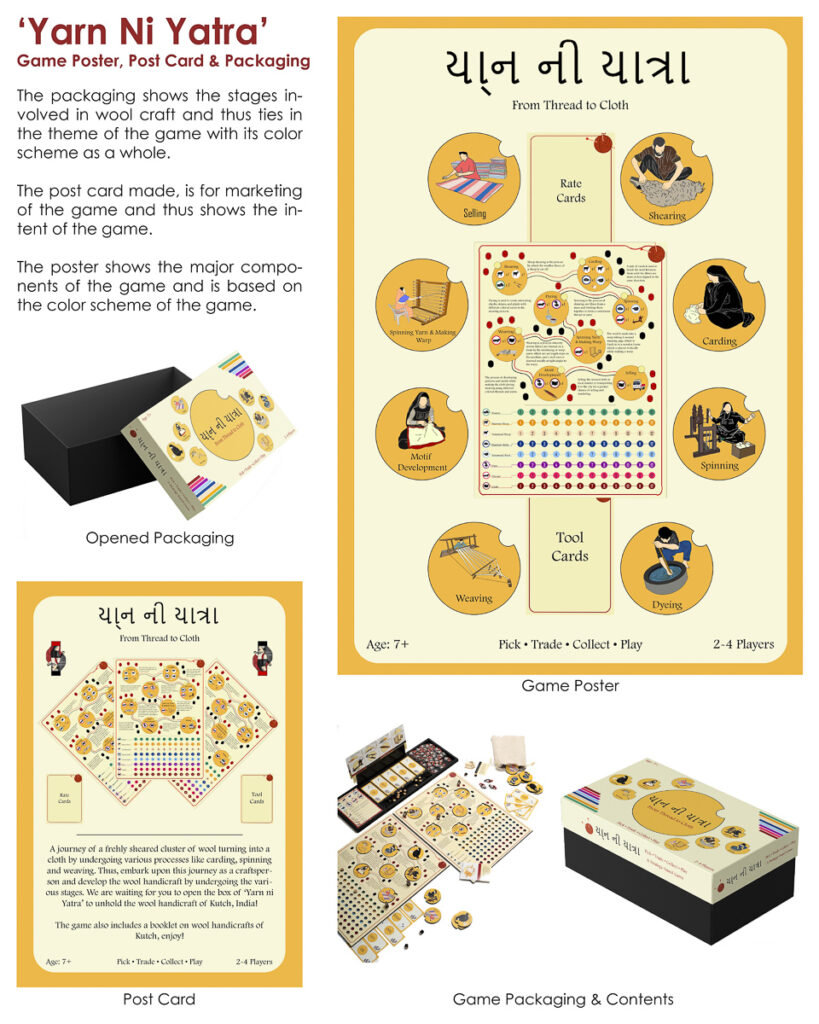 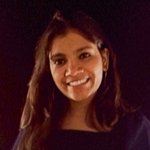 I am a second-year Bachelor in Interior Design student at CEPT University in Ahmedabad. I was born and raised in Mount Abu, Rajasthan, but am currently situated in Ahmedabad. I had designed the project Bhumika: Role of gender in the crafts of India as a part of the studio Reimagining the Vernacular, which is part of the International Academic Research Project – Threads of Innovation (TOI) –  (2021 -2025) between the Faculty of Design, CEPT University and Faculty of Architecture and Design, Norwegian University of Science and Technology (NTNU), Norway. Professor Jay Thakkar and TA Kamna Vyas guided this project, and their persistent support and assistance were vital in making it happen.

The rules of the game: Weaving Durries in Rajasthan
Indian dirt
Primal Casting: From the outdoor studio
Sindhu - The river line: A dialogue
The forest on my flesh
A textile selfie, with love from Rajasthan
Accessing the heart of hand-stitch: Merging tradition and innovation on the Indi...
Quarterly essay - The world in a chai cup: Sandra Bowkett and a village of India...