Nina Sabnini showing the children’s book version of the Kaavad

Following issue #5 of Garland magazine, a series of events in India brought experts together to reflect on the role of storytelling in craft practice today. There was special interest in the role of new media, such as video, websites and e-commerce in offering space for narrative development.

We learnt that the “story” was often about the process of “getting to know” the object. It was a sign of care that the user took to ask the question, click the link or travel to the place of production. The information gained then provided the user with privileged knowledge that they could share with others, such as when visitors to their home inquire about a curious object on the shelf. The “share-ability” of the object’s meaning is key and is worth factoring into production. The story can feature in surface decoration. Sometimes the story can even be integrated into the design of the object through the use of doors or windows, which provide a “reveal”.

We found an especially successful story was one that involved the user, particularly in sharing a “dream”. The user is left feeling that they played some part in the realisation of hope attached to a common good.

The theme of Garland #6 is about the role of objects in telling stories. India has a rich tradition of crafts that involve oral storytelling. This includes the kaavad, a cabinet of many doors used to recount Hindu epics to communities dispersed through Rajasthan. Such objects are useful props for holding the attention of an audience.

In world history, oral performance has competed with the book for the dominant role in telling our stories. But digital technologies now provide an increasingly attractive alternative to the book, not only in e-books but also the stream of social media that competes for our downtime.

This development raises the question of where to accommodate stories. We often treasure keepsakes because they house memories of important people or places. The conversation piece is a common prop for travellers’ tales. And in the case of the heirloom, we have an object whose story is ongoing as a the thread that connects future generations. But by far the most common place for stories has been in books, which we keep on our shelves long after they have been read. They act as placeholders for the mark they have left in our imaginations. As books recede in importance, will objects play an increasingly important role as places to keep our stories?

Again, India is the site of great innovation in the technology of storytelling. Many enterprising Indians have returned from the USA with new digital skills which they have used to develop e-commerce platforms for craft. More and more, these sites feature the story of the artisan—not just a name or a smiling face, but a biography and even personal philosophy. As is well known by tour guides who ferry clients to meet the maker, learning the story behind a handmade object increases its value.

1. The story is in the telling 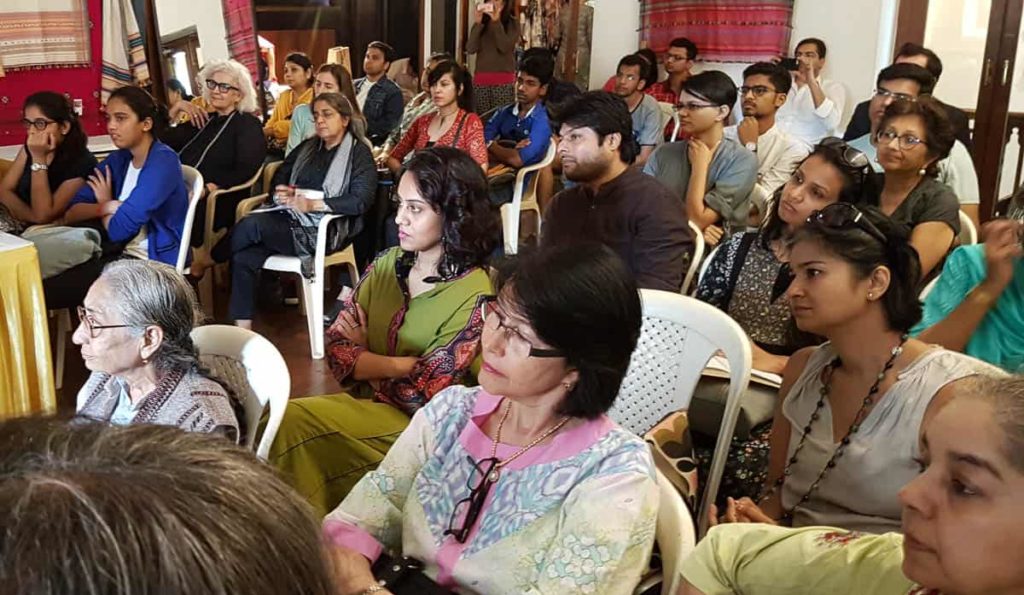 The audience at Artisans Centre, Mumbai

The symposium was part of the Kala Ghoda Cultural Festival in Mumbai. We had presentations by key actors in the narrative craft scene.

Nina Sabnani is an expert on storytelling in Indian craft, specialising in the kavaad. She presented her animation Baat Wahi Hai (It’s the same story). In the film, two storytellers argue about their version of a story about Shravan Kumar, which listeners are free to interpret it in their own ways. The art for the film uses the painted images from the wooden portable shrine called the Kaavad. The film is a collaborative work between traditional Kaavad storytellers and the Kaavad artists from Rajasthan, together with the filmmaker. A combination of animation and live-action, the film is an interpretation of two stories told by the storytellers, which are fused in the act of telling and retelling.

Learning: stories often have different versions which coexist; as she says in her website, the “story is in the telling”.

Madhavi Gandhi’s talk touched on the activist dimension of storytelling in India. She recounted a program for teaching a younger generation the traditional ways of illustrating stories. As she said:

“All objects have a story to tell, and with objects that are handmade, the stories are personal, sometimes emotional and largely cultural. In India, when the art of writing had still not arrived, life was documented through objects, sculptures, and architectural installations. With the advent of manuscripts and painting techniques, stories of our Kings, their courtrooms, political achievements and legacies, religious beliefs, and even epics such as the Ramayana and Mahabharata were documented. While a lot of oral traditions and storytelling has been lost or has diluted over generations, the painted form and objects still exist. In the ever changing and innovation-hungry world we live in, there needs to be a conscious effort to keep our roots breathing, so that the new can take shape with adequate context. At Happy Hands, one of our projects is creating a youth-brigade of storytellers. Individually we can all do our bit to document the histories of things that have been handed down generations, so they can be shared and perhaps at some point become a resource for new practitioners of craft.”

Learning: Storytelling can be a cause, in which we take on responsibility to keep alive traditional narratives.

3. Stories of objects don’t have to be true, as long as they are interesting

Finally, Sumiran Pandya spoke about the e-commerce platform he founded, Gaatha. This site draws on stories gathered by an extensive team in the field that document a varietyIndian crafts and their locations. He said that the motive for building this platform was to provide some benefit to the craftspersons. He thought it wasn’t fair that so many people come to them with questions, without leaving any direct benefit. To give an example of how narratives can enchant objects, he told the story of a princess who, when taking a bath, would use a scrubber ornamented with the form of Ganesh and a bell. In its original context, the bell had the practical purpose of alerting anyone nearby that she was bathing, in case they would come in by mistake while she was naked. It’s hardly a full narrative, but is instead a charming back story.

Later in discussion, Nina Sabinani was telling the story of the origin of the tie-dyed dabbu cloth. The technique was supposedly discovered when the dyer put in muddy dhoti by mistake into the vat. Sumiran gave a yelp and said, “But that was the story we made up!” As part of the Gaatha narrative lab, they would embroider stories about objects to add to the enchantment. They never expected any of them to be true!

Learning: Storytelling can be part of creative dimension of product development

4. A story can have more than one life

Many craft objects evolved over time as tools for the telling of stories. Traditionally, these used design elements such as windows or vertical scroll format to guide the unfolding narratives. The value of the “story behind the craft” is understood today as one of the key sources of value, particularly if the object is used as a souvenir, keepsake or gift. Today, e-commerce platforms are being created to build this narrative value. They do this primarily through click-throughs that reveal more details about the object and the person who made it. After more than five years of development, we can now take stock of this new forum for craft.

This conference asked the following questions:

Sristhi Verma from Kameer Bhuj, Gujarat, spoke about the narrative development they invest in Kacchi crafts, such as leather and ceramics. The capacity of these humble crafts to feature in Hermes rests on the power of their stories.

One story is about the capacity of a craft to renew itself during the course of someone’s life:

“Our relationship started with the birth of a maldhari. It was customary for a Meghwar to make a taalki out of leather for the baby to rest its head on, to give its head a beautiful form. As the baby grew and started to put its feet on the ground, we made little shoes for it called kaunsla. And when the baby grew up and got married, we made the wedding shoes. Decades ago, I made a pair of wedding shoes for a Maldhari for which he gave me a calf. Today I have twenty cows, all descended from that one calf so many years ago.” Bhojabhai, Meghwar leather artisan, Rudramata.

And like the story from Gaatha in Mumbai, there was the tale of bells:

“As in the cities, even if two people have same motorbikes, the owner of the bike would always recognize his due to a fine identification of sound through living with it. Similarly, we, the herders, can identify our cattle from far off through the sound of bells as we ourselves have tuned the bells and know that distinction”, says a Banni buffalo maldhari.

Learning: a holistic narrative involving re-purposing can radically increase the value of a handmade object

5. A story can be just one word

The second day of the conference included a workshop with three artisans from Kutchh. The exercise involved learning their story and providing feedback to help them develop it further.

Irfan Khatri spoke about his Taj series of textiles, which were inspired by a carving from the Taj Mahal at the Victoria and Albert Museum. This seemed a conventional artistic narrative of inspiration gained from visitation of a museum. It linked Irfan with a shared art history canon and granted him creative autonomy. His story was not about finding a need in the market. It was rather an internally generated project.

Irfan had created his own website as a place to house his story. His artist narrative is well suited to the About page, found on every website, which is the default home for an artisan narrative.

Irfan also revealed how WhatsApp has changed his business. He is on a WhatsApp group that involves buyers in the states and can be much more closely involved in the process of product development than before. It means that he can stay in his village yet be closely connected to the world.

Zahir al Khadim spoke directly about the motive for his work in the dream to take his family on Haj pilgrimage to Mecca. This “dream” story is one that creates a sense of hope and positive contribution from the buyer.

The most positive response from the conference was towards Mubeen, a younger block printer. His designs were quite fresh and striking. What transformed his work was the word he used for his label: takdir (destiny). This work seemed to channel the ambition that others could identify in his work. It was more open than the very specific goal of Zahir and more forward looking than Irfan’s. The sense of possibility really energised people.

Learning: if a craft product is of high quality, a single word can be powerful enough to engage people strongly in the work

There is much to learn from the Indian craft scene. Not only is it the repository of some of the world’s great storytelling traditions, it is also a site of amazing innovation as an ancient culture embraces the digital age. 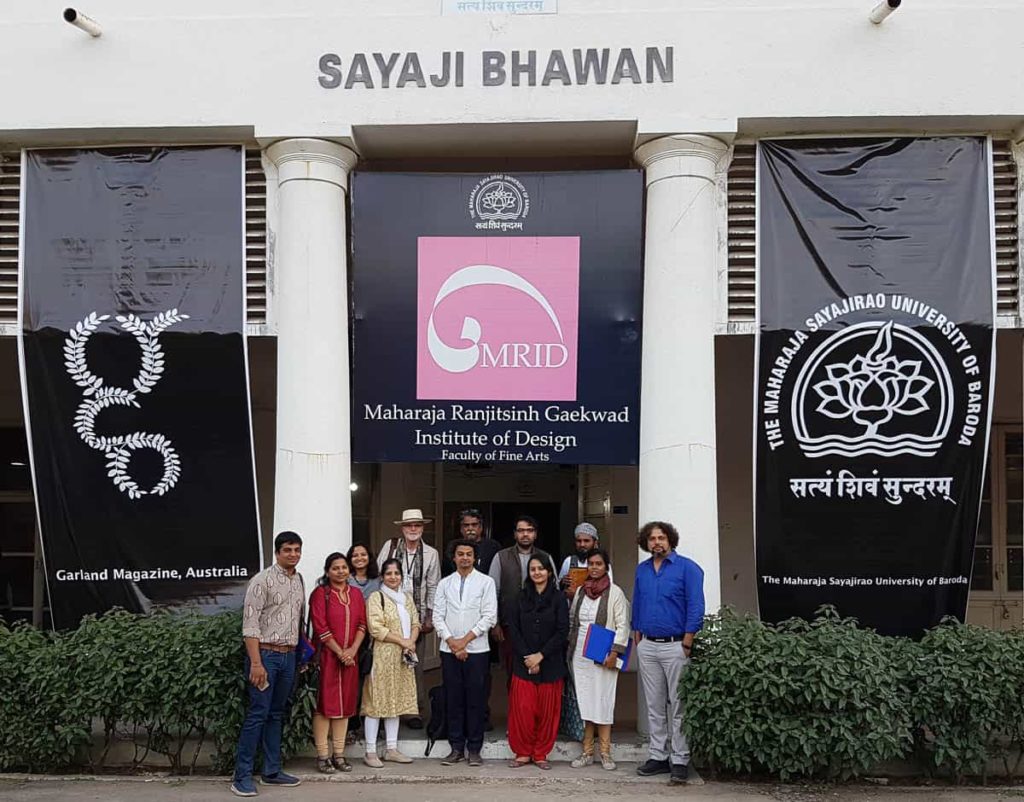 Speakers from the Narrative Design in Craft conference at MSU Baroda

Like the article? Do think about joining the conversation by leaving a comment below. Authors (and fellow readers) are interested to know what you think. And if you haven’t already, consider becoming a subscriber.