A Kolam for Washington DC 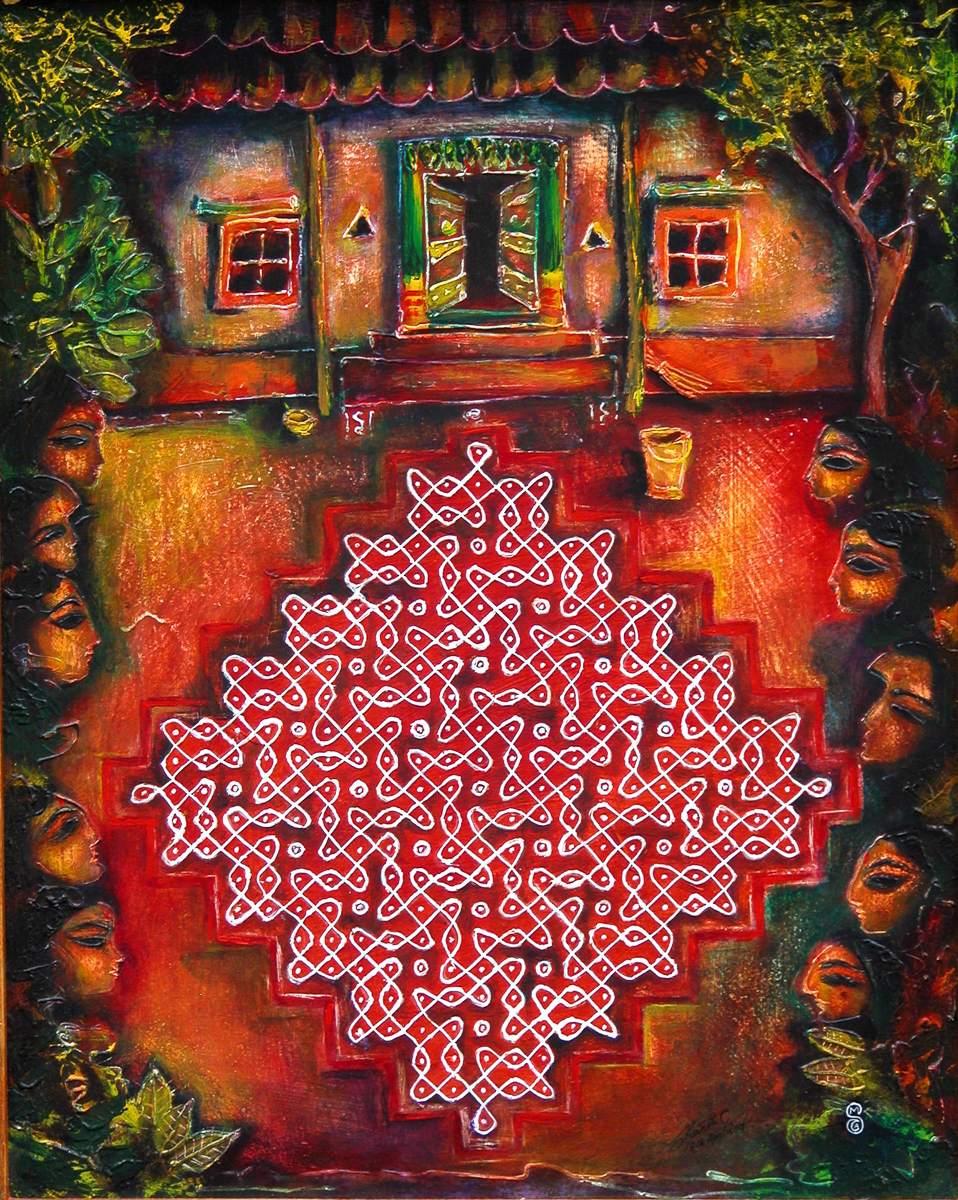 Shanthi Chandrasekar tracks the memories of Kolam adornment rituals that now inspire a homage to the US Vice-President.

Every morning at sunrise and sometimes at sunset, Tamil women clear the front of the house and draw a Kolam, a pattern of dots and lines using rice or rock powder as a symbol of welcome and to bring good energy into the household. It is an ancient tradition that still continues to be performed as a daily ritual and has been handed down from generation to generation.  I grew up with Kolams and they are some of my earliest memories of art. 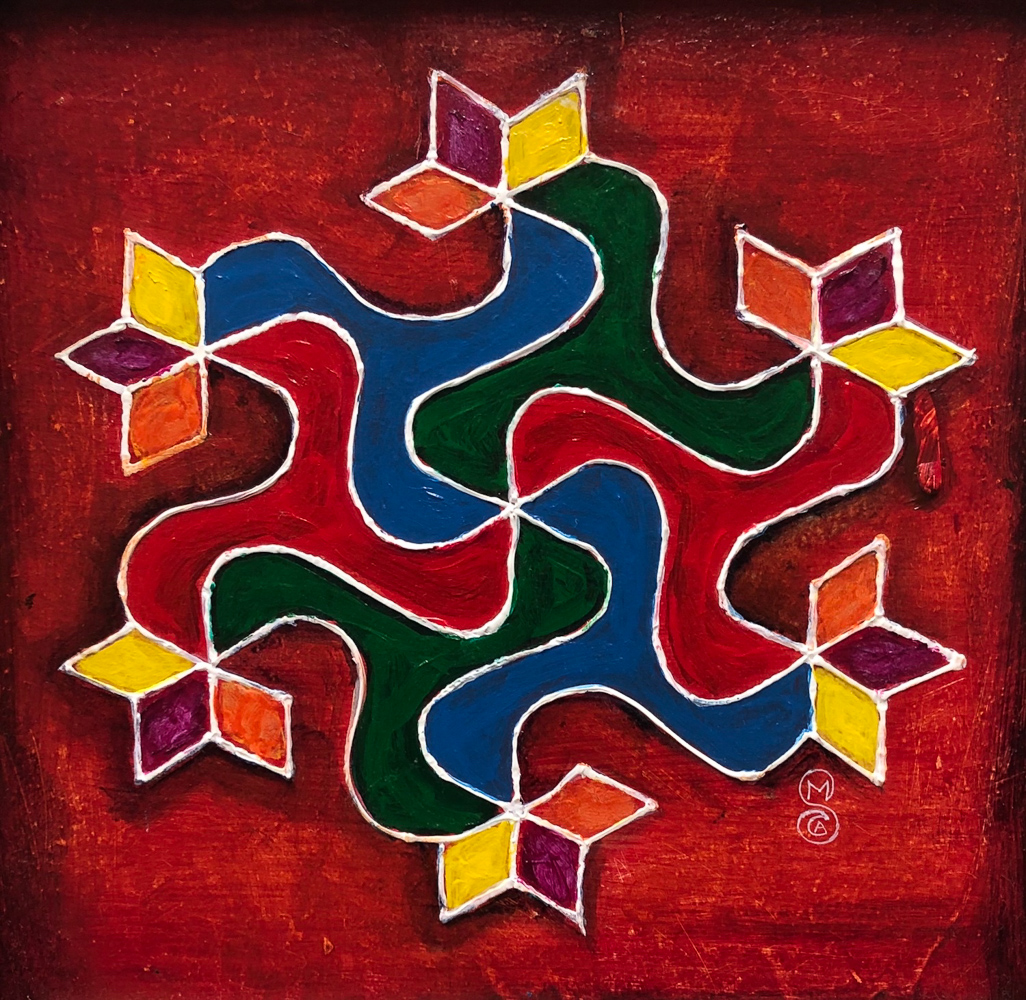 Kolams are drawn on the floor or directly on earth without the use of any measuring tools. The dots are laid down first in mostly 90 or 60-degree grids. In Sikku Kolam lines weave around the dots to create one or more closed loops. In some Pulli Kolams, the dots are connected with lines instead. Padi Kolams are made of only lines and no dots.  Kolams could be simple or complex patterns, and sometimes include images like flowers, leaves, or conches. On special occasions, Kolams are filled with colored powder or are drawn on floors with a small piece of cotton cloth soaked in rice that is ground with water to make it last a little longer. 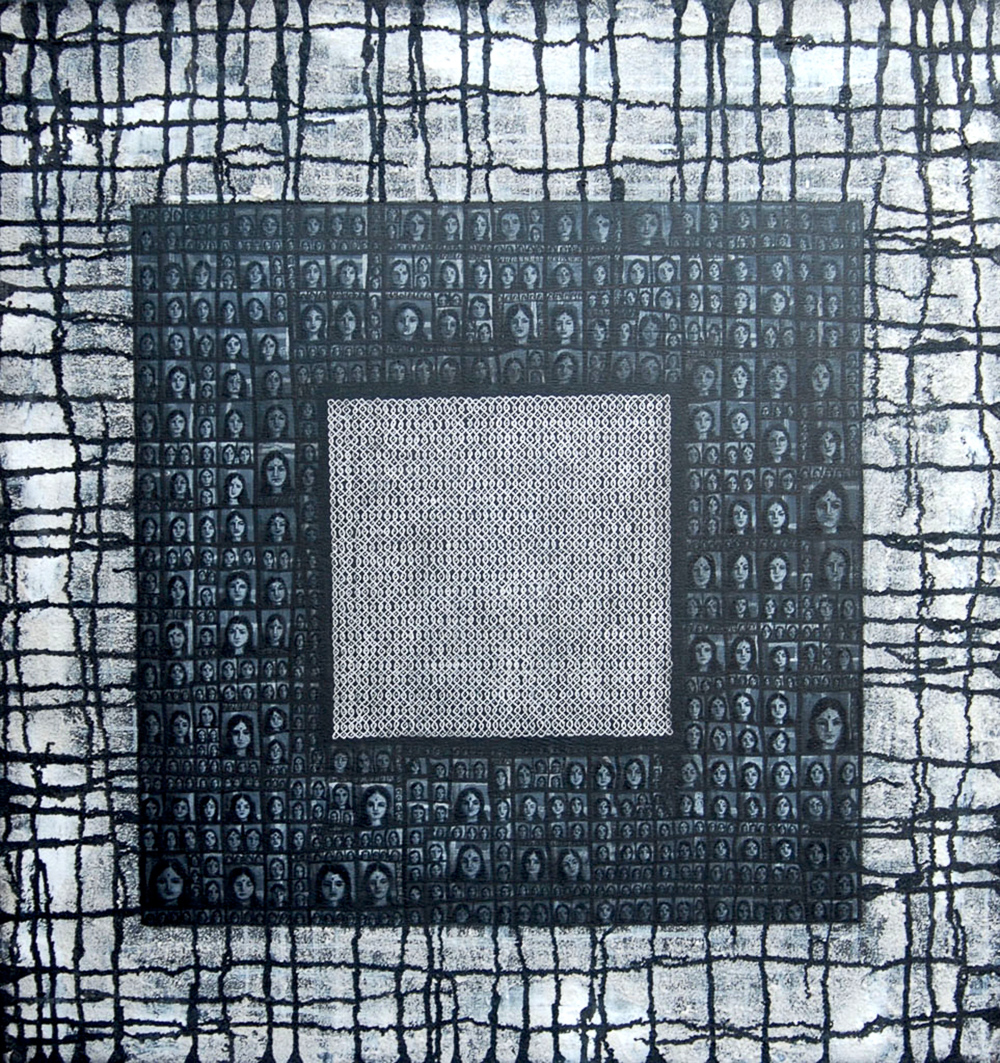 Traditional Kolam is an eco-friendly art form as it is created using natural materials like rice, rock, chalk or flowers. The rice powder serves as food for birds and insects, thus feeding a thousand souls leading to good Karma. What comes from Earth goes back to Earth and Kolams demonstrate this on a day-to-day basis. Kolams remind us of the fragility of our world and the delicate balance between sustainability and overuse, making us aware of the interconnectedness of the entire system.

The dots are said to represent challenges in life… 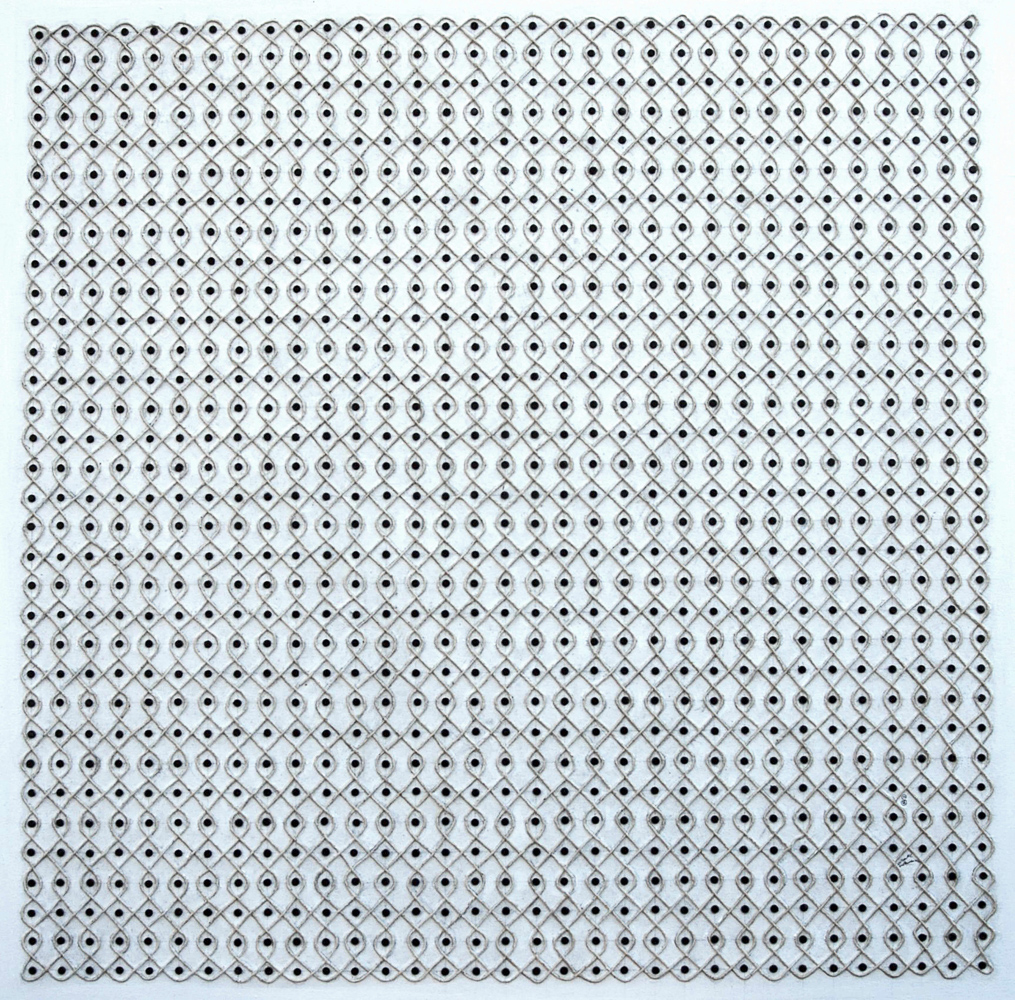 Kolams are steeped with philosophy and life lessons. The dots are said to represent challenges in life, and if one can weave their way around them and get back to the starting point, while still maintaining some kind of symmetry, they could deal with life’s ups and downs. We tend to be more aware of the challenges or obstacles than the inner strength that is not always as visible. Drawing a Kolam, whether it is on the ground or on paper, is a meditative process. There is a sense of calm as the grid of dots is drawn and the lines weave around them, going with the flow. Typically, the Kolam is drawn on the floor by bending at the hips, helping the body and mind stay flexible. 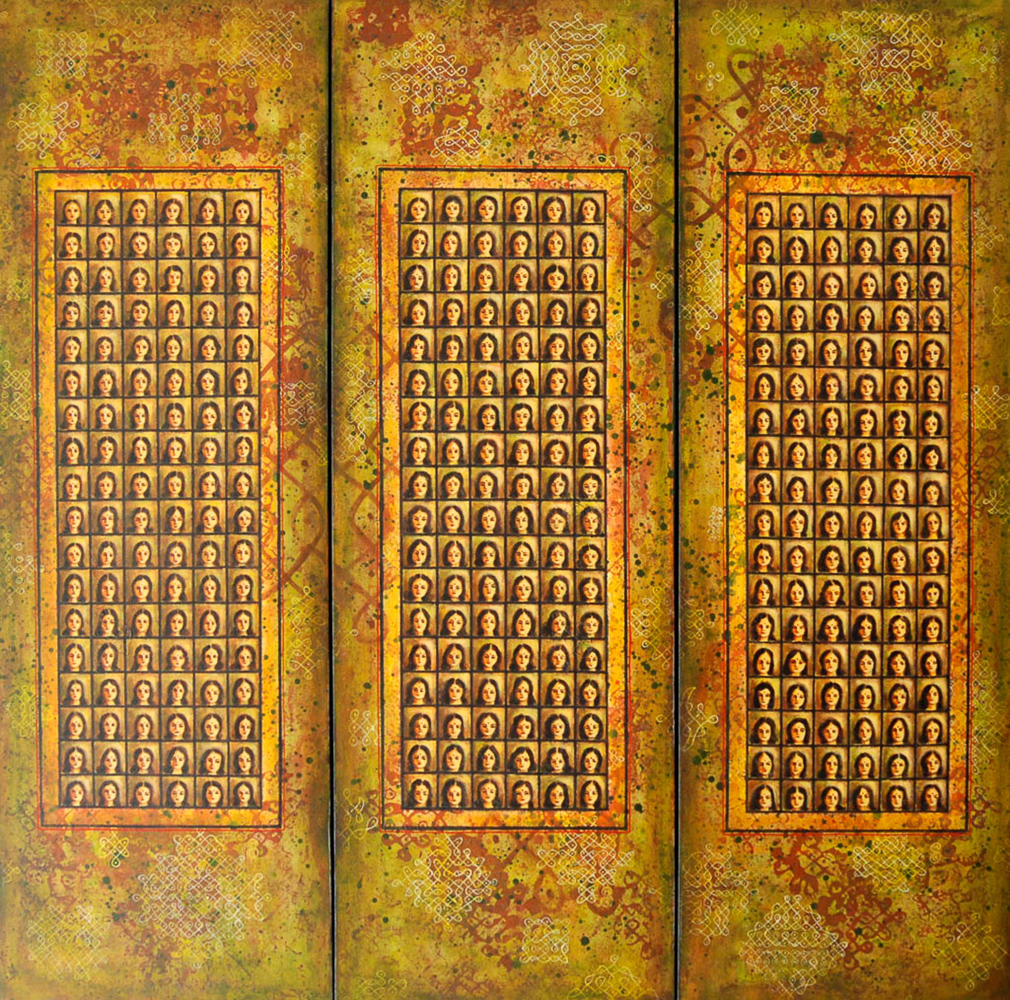 Kolams serve as a reminder of impermanence and non-attachment, teaching to let go as complex beautiful patterns are drawn with the knowledge that it will fade away since a Kolam lasts only a few hours, maybe a few days, before it gets erased. As Kolams are made freehand and drawn mostly from memory, mistakes are bound to happen, providing an opportunity to improve. Also, the dots and lines remind me of Shiva-Shakthi with the combination of the two creating something beautiful and whole. 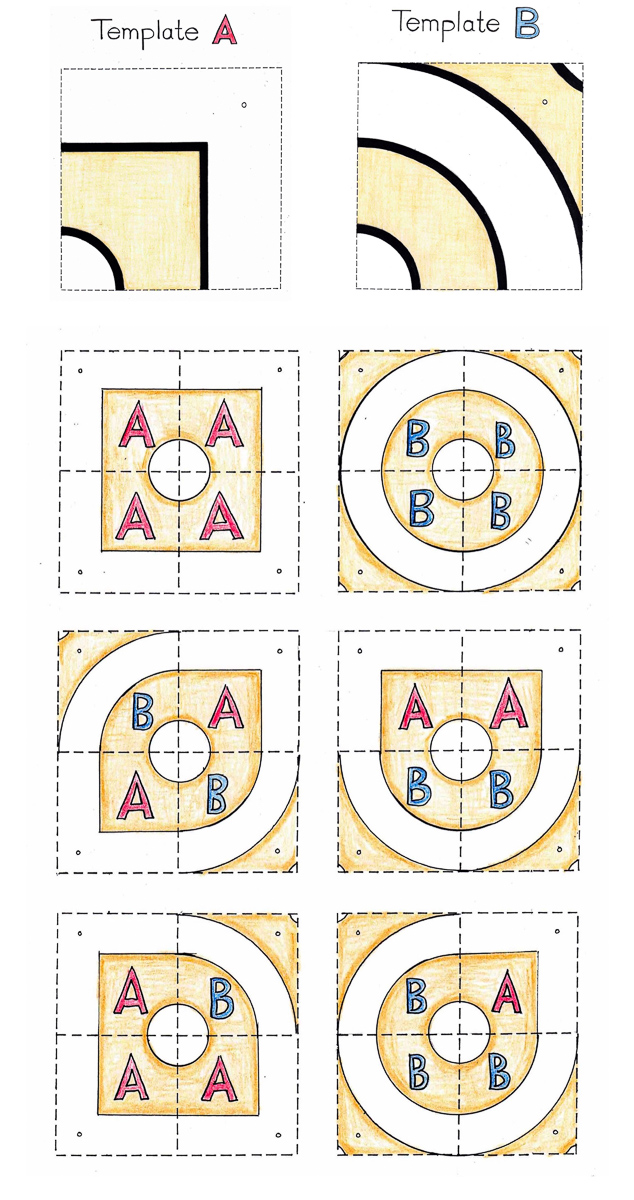 The Kolams are mathematical in their making and involve geometry at its core. The patterns are composed of six key shapes, which are formed, by the permutations and combinations of a quarter of a circle and a quarter of a square and these shapes can connect in different ways to create Kolams. There are some implicit rules that Kolams tend to follow. Each of these six shapes can connect to other shapes at the nodes or the square corners. Four shapes always surround the square while the circle doesn’t connect with any other shape. By playing around with these possible connections, a number of different patterns can be created. Kolams symbolize infinity as the closed loops create never-ending paths with the line going around the dots following the shortest distance and gets back to the starting point, changing from a circle around a single dot to an 8 shape around two dots. These paths are similar to Euler’s circuits in which a path is traced only once. Kolams usually have at least one symmetry- reflection, rotational, translational or scaling. Kolams can also be fractals as a simple pattern can be repeated to create larger and more complex Kolams while still retaining its original shape. Mathematicians are studying Kolams in connection with graph and knot theories and more. 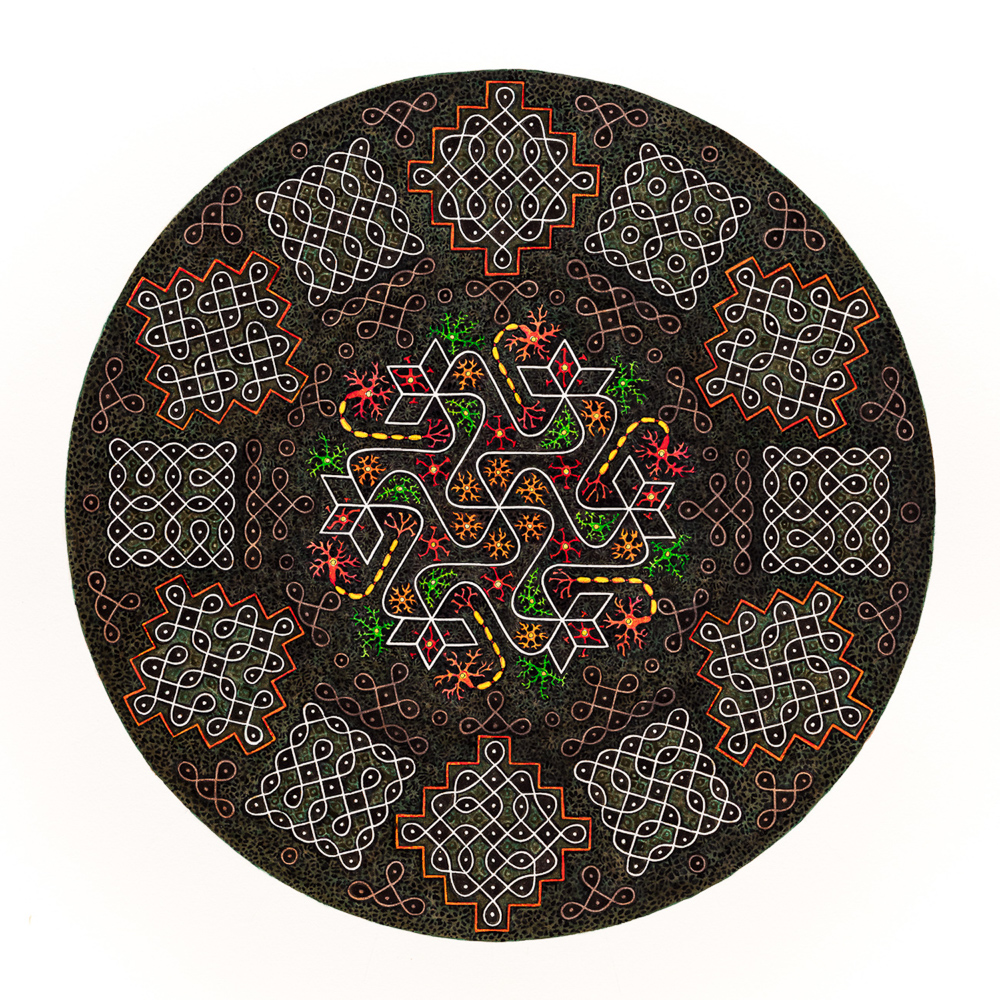 Kolam captures the essence of the cosmos, a small portion of something much larger. The ephemeral nature of Kolams is a constant reminder of the cycle of creation and dissolution at various scales. The play of entropy, from order to chaos, can be perceived in the short duration of a Kolam as its highly ordered patterns get disintegrated in just a few hours. While a grid of dots serves as the scaffold for the lines to weave around, symbolizing matter and energy, in my artistic vocabulary, the dots and lines represent the particle and wave nature of light. There is a striking resemblance between the Kolam designs and the patterns caused by vibrations of fine particles and fluids as demonstrated in Cymatics. They also remind me of the shapes of orbitals, chemical notations or even glial cells in the brain that support the neurons and these ideas inform my artwork.

I am always fascinated by how women draw these beautiful Kolams every day without thinking of themselves as artists or mathematicians, but simply performing daily rituals, keeping an ancient tradition alive. It is a powerful idea to imagine all these women making art at the same time, in front of their houses on a day-to-day basis. Recently, I participated in the 2021 Kolam Project, organized by Roopal Shah and Sowmya Somnath. I designed a large Kolam made of 12”x12” tiles, each consisting of a dot in the center and one of the six basic Kolam shapes, all created and designed individually by the participants. We collected tiles designed by people ranging in age from 5-95 years old around the country, including DC Public school students, a childcare centre, and a correctional facility. With the help of family, friends, and volunteers, we assembled the 1950-tile Kolam installation in front of the Capitol Building in Washington DC. This collaborative project was also included in the 2021 Presidential Inauguration kick-off as welcome to the incoming Vice-President who is partly of Tamil origin. In spite of the numerous hurdles and challenges, the tiles all fit together perfectly and we were able to assemble the large Kolam successfully. 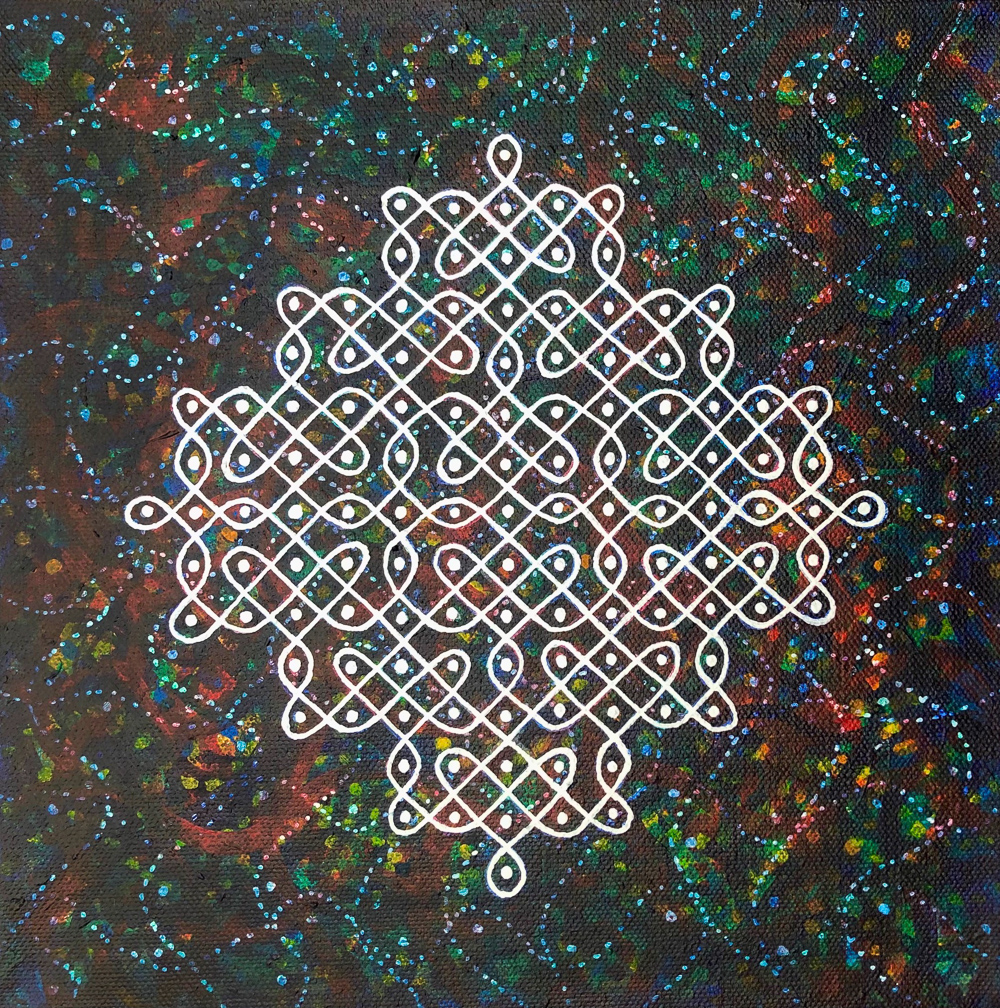 The simplicity of dots and lines in Kolams, with their beauty and philosophy, continue to inspire me. In spite of the rules guiding how the dots and lines should be drawn and the maintenance of symmetry in the design, there is space for endless creativity. I find Kolams to be a culturally significant tool that juxtaposes art, science and philosophy while also keeping an ancient tradition alive. 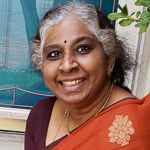 I am a US-based multimedia, multidisciplinary artist and my work is inspired by my Indian heritage combined with my fascination for science. I have two exhibitions on display currently, a Kolam themed show in Maryland and a science art show in Washington DC. Visit www.shanthic.com.

COVID: An opportunity for the handicraft sector in the long run?
Anuradha Chauhan: A secret of the Himalayas
Launch of Garland #5 - Trading Tales in India
Pachanbhai ✿ A finely woven story of change
Issue #5 - @India
Issey Miyake: Pleating craft and technology together
Hangout with Gopika Nath
Sreenivasulu ✿ A pen-ultimate world