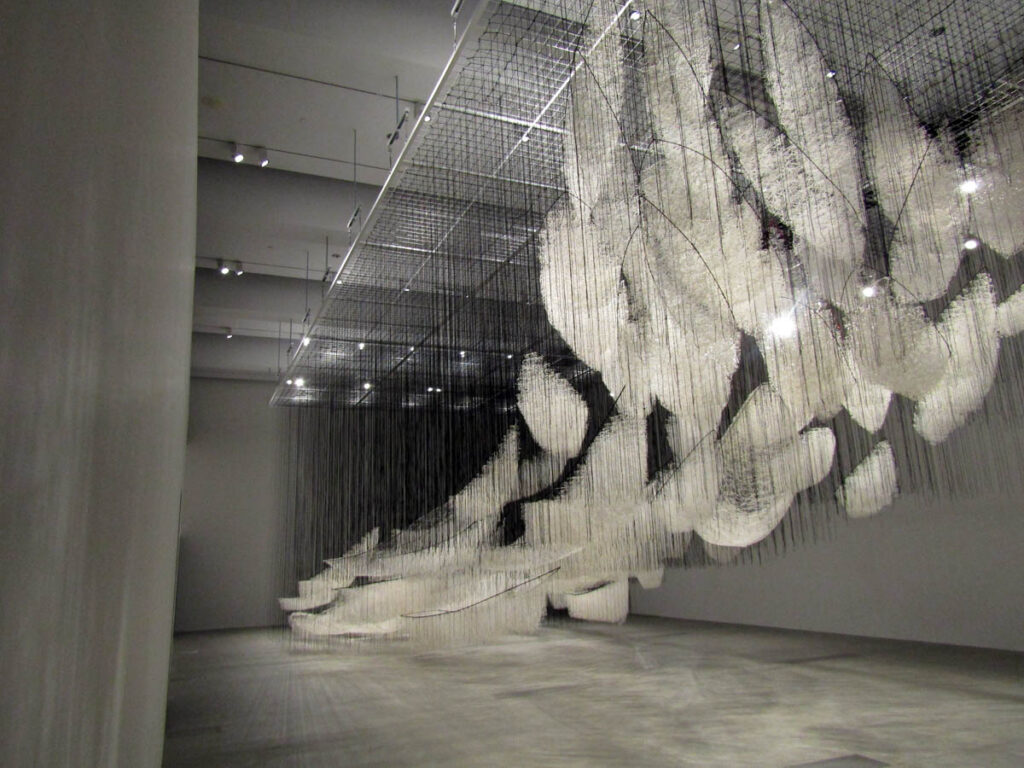 Visitors to the exhibition begin their journey with Where are We Going (2016/19), which features a series of boats. Boats are a symbol that Shiota turned to when confronted with her own mortality.

Pamela See is intrigued by the Shinto roots in Chiharu Shiota’s exhibition, in which she deconstructs the canvas to envelop the viewer in purifying threads.

The Gallery of Modern Art, in Brisbane, is presently hosting the largest, most comprehensive, solo exhibition to date of the Berlin-based Japanese performance and installation artist Chiharu Shiota. Curated by Mami Kataoka, director of the Mori Art Museum, The Soul Trembles bears witness to the emergence of an artist renowned for her tactile investigations into connectivity, which coincides with the ascendance of the World Wide Web from the early 1990s to now. Shiota tethers and entangles entities to emphasise their material objecthood, whilst conversely celebrating their capacity as vessels for the immaterial, including the people who are inevitably enveloped by the expansive environments she creates using wool. The material and technical simplicity of what, in an Australian craft context, might be described as epic “yarn bombing” makes her complex contemplations, about what it is to exist, accessible.

This quintessential human preoccupation is addressed by Shiota with the authenticity of deeply personal narratives and symbols, which despite their cultural specificity appear to have universal appeal. 注連縄 [Shimenawa], for instance, is a Shinto practice of sanctifying space by securing its boundary with a length of rope. 赤い糸 [red string], is a Japanese principle which implies that fate binds people together with an invisible red string. By contrast, a complete absence of colour connotes death which is perceived as a point of transition as opposed to an end. This boundary between the material and immaterial world is considered fluid. The boat, a loaded symbol for Australian audiences, also plays a significant role in the creation mythology of Shinto. One of the 七福神 [Seven Gods of Fortune], 蛭子 [Hiruko], was placed in one and cast off into the ocean as a malformed toddler, where he grew bones and appendages. Boats were amongst the symbols Shiota turned to when confronted with her own mortality. In 2016, she received the diagnosis that the ovarian cancer, which she survived twelve years earlier, had returned. 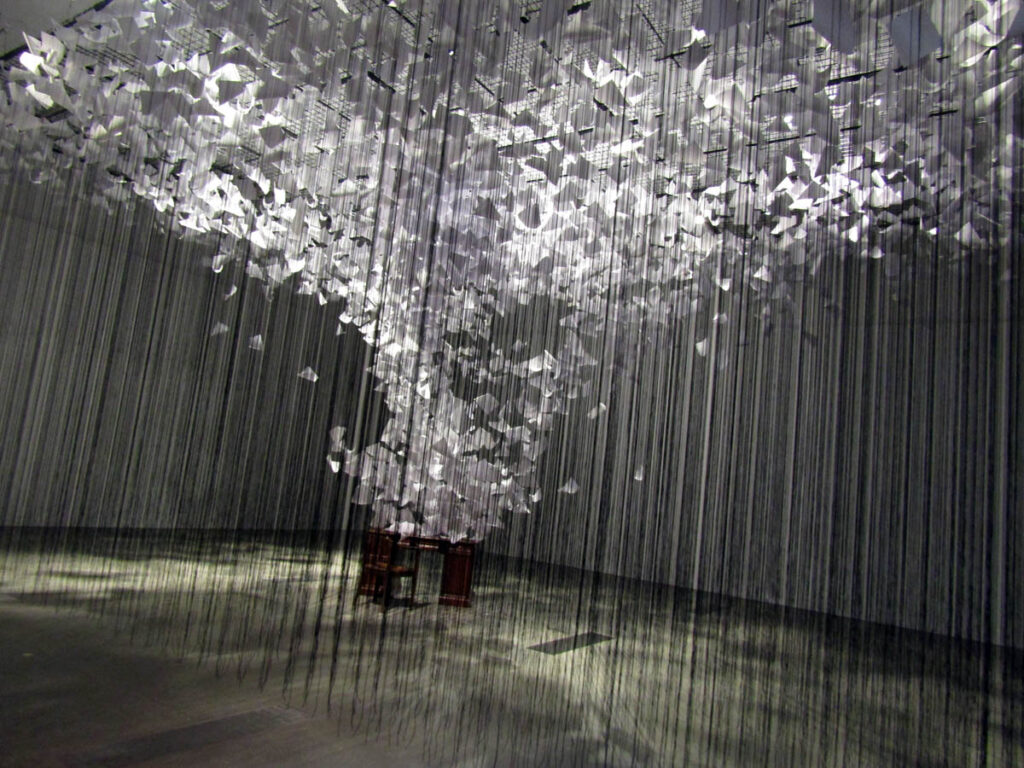 The newly commissioned A Question of Perspective (2022), presents copious sheets of paper suspended as though in a state of animation by a matrix of ropes.

The Present Past Captured Through Absence

When arriving at the exhibition, audiences catch a glimpse of Uncertain Journey (2016/19), which consists of a series of four boats anchoring a vast network of red wool threads. The first room they enter houses Where are We Going? (2016/19), which features dozens of boat frames, with hulls accented with white wool, suspended in a shower of dangling black rope. The boats flow in a curve, leading audiences into a museum-like display area. Its content chronicles Shiota’s development, from childhood paintings and a workshop with Marina Abramovic. Highlighted is photographic documentation of her performance artwork Becoming Painting (1994), which she undertook whilst on exchange at the Australian National University (ANU) School of Art. Wearing both a canvas and red paint, Shiota negotiates Western art principles which were propositioned by Leon Battista Alberti, in his fifteenth-century treatise on painting, De Pictura, such as:

If many lines are joined closely together like threads in cloth, they will create a surface… on the surface I draw a rectangle of whatever size I want, which I regard as an open window through which the subject to be painted is seen.

Accordingly, paintings are supposed to be two-dimensional representations made from a single vantage point. In From DNA to DNA (1994), a subsequent performance artwork at Kyoto Seika University, she completes her deconstruction of these conventions—or at least her canvas. In place of a woven surface, her signature “drawing” with red threads emerged as a sinew-like mass attached to her painted body as though it were cast from a womb.

In the newly commissioned A Question of Perspective (2022), black ropes hang loosely to create a three-dimensional cartesian plane through which objects, like paper, are threaded, effectively presenting them in a state of suspended animation. Articulating the artifice of her constructed reality through this matrix of lines leads audiences to question the authenticity of their own. The ropes remaining untethered also entices audiences to make a connection, despite touching the artwork being prohibited. The copious sheets of paper in this installation float from a bureau-style desk. The paperwork furthers a migration narrative, which begins with boats and concludes with worn suitcases both making their descent from their respective ceilings to the ground. Located at the exit of the exhibition, Accumulation: Searching for the Destination (2014/2021) is reminiscent of a baggage reclaim area complete with moving luggage.

In one of the earliest of Shiota’s installations re-presented in the exhibition, In Silence (2002/2021), she recreates a childhood memory of a neighbouring house burning down to reveal a piano. A charred version of the instrument emanates woven Alcantara black thread, a mass which at once obliterates and incorporates an audience of vacant chairs into a surface. Whilst translucent screens are an Asian aesthetic, the triangulated embedding of fibre is distinct to “washi” or Japanese papermaking. There is accompanying text affixed to the wall, which concludes with:

…But they exist as souls without a tangible form. The more you think about them, the more their sounds disappear from my mind and the more tangible their existence becomes. 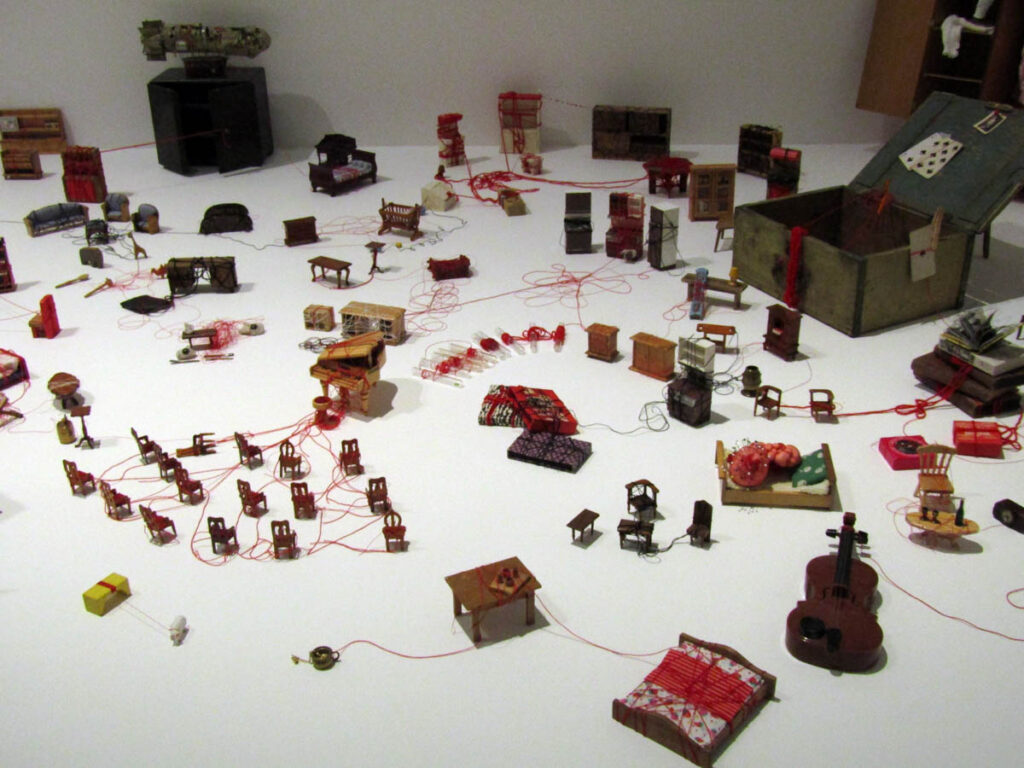 Connecting Small Memories (2019) is a collection of objects which “coexist with [her], in [her] atelier”.

This illustrates a reifying role of collective memory. Connecting Small Memories (2019) is an expansive accumulation of intimately sized objects, Shiota chooses to “coexist with [her], in [her] atelier”. Ranging from tiny tea sets to miniature musical instruments, each component is tied together with red wool thread. These seductively small finds from Eastern Berlin contrast an adjacent monumental artistic impression of the Berlin wall, constructed from windows retrieved from building sites around the city titled Inside – Outside (2009/2019). A consistent feature of animism is that the size of a vessel and the soul which inhabits it are not proportional. Shiota’s capacity to affectingly engage audiences, equally, does not diminish with the scale of her artworks. Highly versatile, she is able to effectively convey a desire to connect in an age of unprecedented discord using an array of media from video to charcoal drawing. 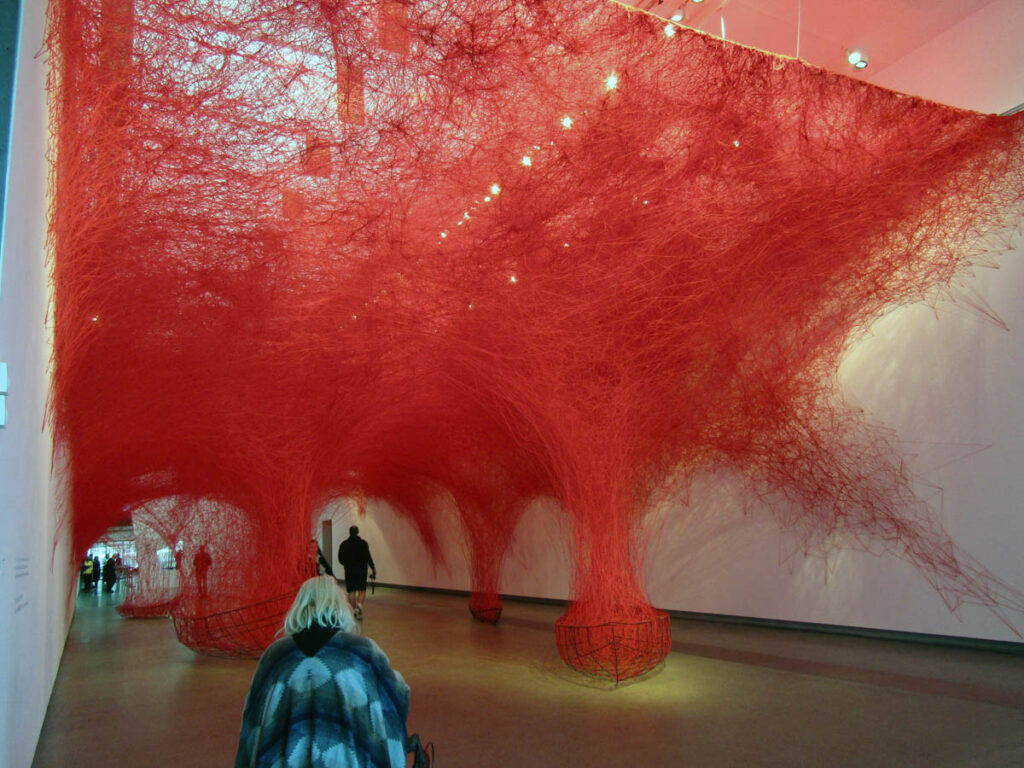 When navigating this exhibition being physically consumed by the cavernously crafted environments is unavoidable. Uncertain Journey (2016/19) is one of the installations audiences are required to traverse.

Initially staged in 2019 at the Mori Art Museum in Tokyo, with successive exhibitions in Taipei and Shanghai museums, some of the installations by this site-responsive artist are in their fifth, if not later, adaptation. Yet despite threads being a prevalent theme, the artworks appear seamless but for the prospective unravelling of audience expectations. In the 2020s, knitting has been specified as a treatment for stress and social isolation by medical professionals in the US. Within our nation, one “built off a sheep’s back”, wool carries connotations of comfort, as per the idiom “to wrap in wool” or deception, as in “to pull the wool over your eyes”. Feelings of disquiet may be solicited from Shiota’s visceral and, at times menacing, application of materials ordinarily associated with warmth and protection. The artist has expressly stated her desire for “…them to understand what it is to live and what it is to die” in a single moment.

This fluidity between the material and immaterial may present an unsettling prospect for some viewers. It is the way this proposition is conveyed which is remarkable, for Shiota effectively uses threads to ensnare her audiences in monumental picture planes. This is achieved through her dismantling of “the canvas”, a convention with which we are all inculcated. Shimenawa, involving enclosure with lengths of rope, performs a purifying function in Shinto. Once entered, a viewer cannot exit the exhibition without being physically consumed by the cavernously crafted environments. Having their perceptions challenged, if not altered, appears equally unavoidable. As suggested by the title, “the soul trembles”.

Klass, P. (2020, November 2). In a Stressful Time, Knitting for Calm and Connection. The New York Times.

Canberra cares: The craft and design of resilience
Mino-momoyama ware
The shape of YOI よい: A drunken evening of Japanese ceramics
The year of the paper tiger 🐅
Kyoko Hashimoto ✿ the Musubi necklace
Japan matters in Sydney: An exhibition of material design
Masahiro Sasaki ✿ Glass comes first
Art for life ✿ The hanging garlands of Pompeii according to Dylan Rogers