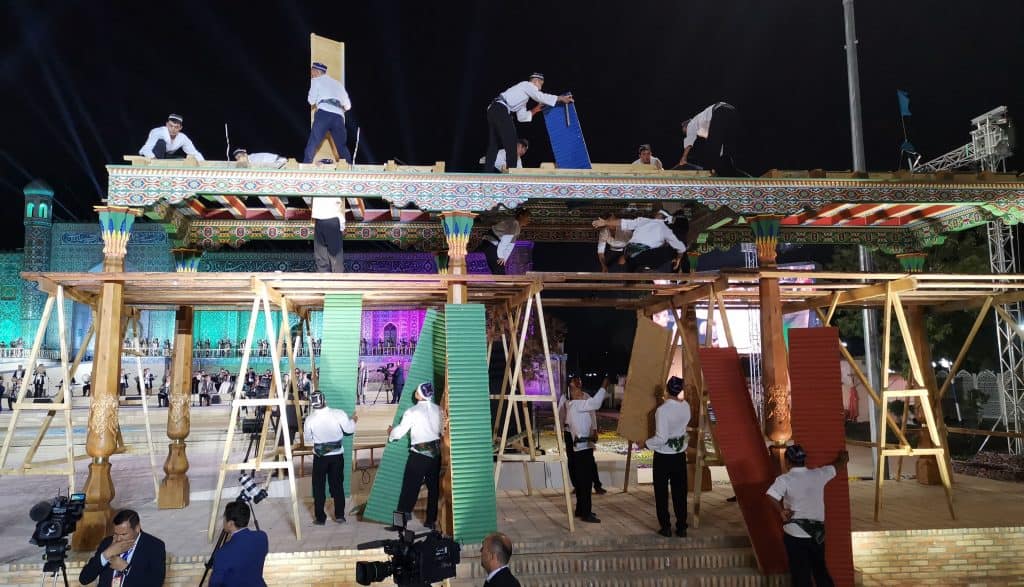 During a stunning opening ceremony for the Festival of Handcrafters, master artisans assembled two wooden pavilions in under 30 minutes.

On Saturday 14 September 2019, the President of Uzbekistan, Shavkat Mirziyoyev, opened the inaugural Festival of Handcrafters in Kokand. His speech heralded Central Asia as a driving force in the global “craft renaissance.”

For more background on the craft cultures Central Asia, see our Stans issue. 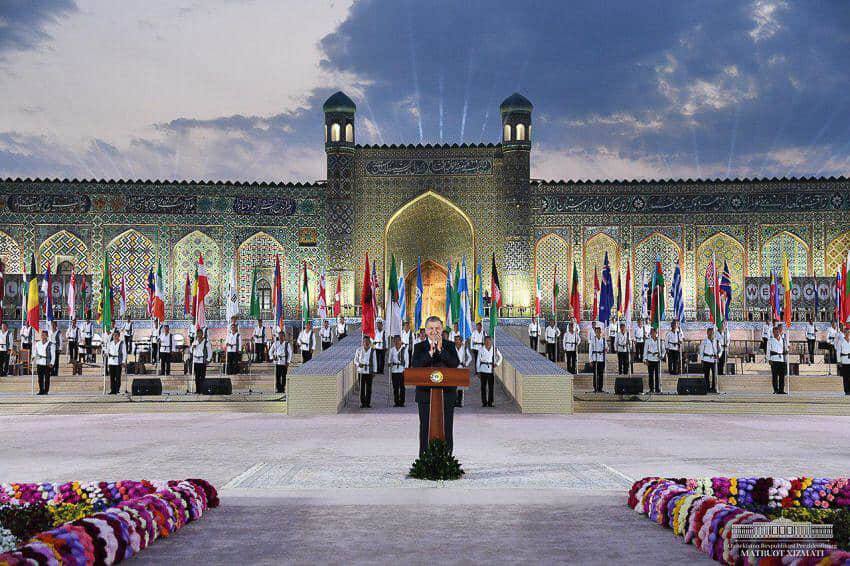 Dear participants of the forum,

As it is well-known craftsmanship, while standing as an integral part of universal culture, occupies a special place in the life of each nation, sharing its mentality and values. Indeed, the emergence of crafts became the most important historical step in the development of civilization.

The great towns and cities, wonderful samples of architecture, historical and archeological monuments, unique exhibitors of thousands of museums, which belong to entire humanity confirm the aforementioned.

As a major fact, craftsmanship derives inspiration in harmony with nature, as a result, the bright and wonderful masterpieces are created.

In order to give life to the ordinary ground or piece of metal or wood, to make them refined items of art, there is needed not only hard manual work but also the warmth of human soul. It is very important to have a delicate flavor and mastery, enormous patience, and most significantly, love and devotion to the craft and full commitment.

Along with this, in order to turn an item in to work of art, a true artisan, whether a potter or graver, weaver, carver or jeweler, must have basic knowledge in chemistry, biology, medicine, physics, geometry, astronomy, history, philosophy and other disciplines and be able to apply them in practice.

The astounding mysterious ornaments, truly divine patterns and incomparable color pallets of our national embroidery “Suzane” which has gained fame throughout the world, embody cosmogonic imaginations of distant ancestors.

Our people have always honored skilled craftsmen, true artisans of their work by deferentially calling them usta (master) and ustazoda (descendants of masters).

In this regard, I think it will be apt to recall the wise maxim of the outstanding thinker Bahouddin Naqshband “Craft is like a fabulous phoenix, on whose wings one can reach the highest levels – recognition and respect of the people”.

Bahouddin Naqshbandi whose 700th anniversaries we will celebrate next year was not only a great Sufi and philosopher but also a wonderful craftsmen and spiritual mentor of artisans.

Still today thousands of crafts people of our country being guided by his statement “Give your heart to Allah and give the hands to the work”, by their hard and honest work and the best human qualities serve as an example to many and especially to the youth.

In the meantime, in this age of globalization and high technology, we, unfortunately, often encounter lack of serious attitude to this unique art, stating allegedly that it is only a relic of the distant past. If we do not support the folk arts widely, at the public level, tomorrow may be too late – handicrafts could end up unable to withstand fierce competition from serial production.

In this regard, such international forums as the current one, are important for the careful preservation, revival and advancement of folk crafts throughout the world, for the delivery of the traditions of artisans on to the future generations, for the unification of our efforts and opportunities along this path.

We are creating all necessarily legal framework in Uzbekistan for effective work of craftspeople and worthy appreciate of their work. They are enjoying big benefits and preferences.

There is a “Hunarmand” Association that brings together thousands of artisans and is designed to protect their rights and interests.

As a bright confirmation of the considerable significance attached to the services and merits of representatives of this sphere, the celebrated Bukhara-based master of gold embroidery Muyassar Temirova, the brilliant restorer Mirumar Asadov from Samarkand, as well as the famed woodcarver Abdugani Abdullayev from Ferghana have been rewarded with a high title of Hero of Uzbekistan.

We are creating extensive opportunities for upbringing our children as harmoniously developed personalities, to master contemporary knowledge and professions as well as the folk crafts. The capital city and other places in the country outstands the festival and fairs, exhibitions and contests the craft schools for youth are being established.

Most importantly, the representatives of this sphere are making commendable contribution to creating new jobs, attracting youth the socially valuable work activities and developing tourism.

Certainly, we will continue attaching attention to the craftsmanship which reflects our history and national identity, ancient and rich traditions.

Therefore, views, proposals and recommendations to be expressed during the current international festival are important to us.

It is no accident that Kokand was chosen as a venue for holding the International Crafts Festival. This ancient city, distinct with its unique flavor, is considered the pearl of the Ferghana Valley, which is called the Golden Valley that it deserves to the full.

Hukandi Latif, meaning the gentle, pleasant Kokand, wields a 2000-year glorious history and has seen plentiful great events. It is one of the brightest symbols of our national statehood, a place where science, arts and literature thrived along with a great diversity of handicrafts.

We are proud that the fertile land of Ferghana has nurtured dozens of prominent thinkers, poets and artists who have made a great input into the development of world science and culture.

There are so many famous types of crafts from the all Fergana region that became a national brand. I believe there is no need to speak more about world famous Margilon Atlas and Ikat or Adras, shimmering with all the colors of the rainbow, the unique pottery art of Rishtan, the Kokand school of wood carving and the gypsum carving which is called “ganch”.

Today, the image of the Ferghana region, as much as that of the entire nation, is changing, along with Kokand that has been turning into one of the comfortable places to live in Uzbekistan, major economic and cultural centers of the country.

It is an open secret that on the eve of the festival yet another important event took place in the life of the city. The World Crafts Council has included the Kokand to the World Craft City network, we can say that Kokand took a solid place on international map of crafts.

Kokand was the first from the Commonwealth of Independent States which has been included in this network. We consider this a high international recognition of our efforts to promote decorative and applied arts in the country.

President of the World Crafts Council for the Asia Pacific, Ms. Ghada Hijjawi-Qaddumi, recently presented a corresponding certificate to the city of Kokand.

With all my heart I congratulate the esteemed residents of Kokand as well as all the craftspeople of Uzbekistan with this high acknowledgment.

Let me express, on my own behalf and that of all our people, gratefulness to the World Crafts Council and its President, distinguished Ms. Rosy Greenlees.

I believe that international festival is a big holiday not only for multinational people of Uzbekistan but also for craftspeople and artisans throughout world.

This is a forum of true friendship and cooperation where far past and modernity, traditions and values of different people do harmoniously combine, people hearty close to on other, do come together.

I am confident that Kokand festival, which promotes peace and accord, deliver kindness and beauty to people and it will surely occupy a commendable place in international cultural space. Once again I totally welcome all of you on the hospitable and benevolent land of Uzbekistan.

I express enormous gratitude to all our compatriots, the hardworking and generous Fergana people, residents of Kokand who are made everything possible and necessary to make sure this culture forum is held at the highest organizational level.

I wish every participant of the festival, our esteemed guests, a sound health, happiness and new creative achievements!

Welcome speech by Rosy Greenlees, the President of the World Crafts Council 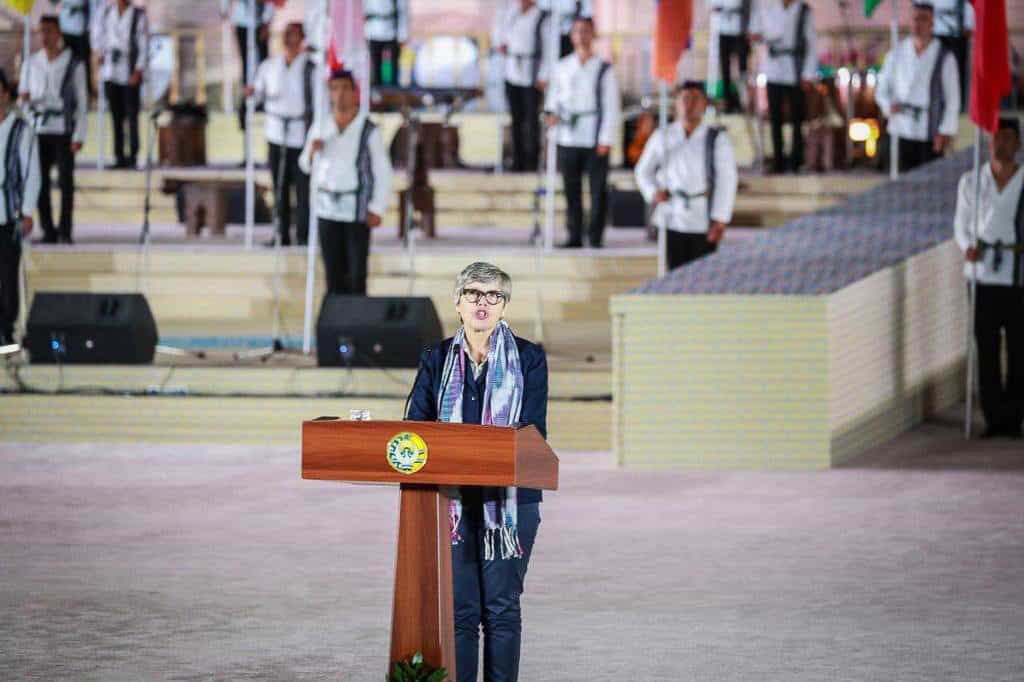 I am both delighted and honored to be here at the opening of inaugural International Handcrafters Festival in Kokand.

Today we are witnessing a magnificent celebration of art, culture and friendship in one of the ancient and beautiful cities of Uzbekistan with a rich cultural and historical heritage.

As part of the Great Silk Road Kokand for many centuries played an important role in cultural interaction between the people of the wider region.

The Khudayar-Khan Palace – a unique creation of the craftsmen of Uzbekistan in the heart of the Fergana Valley, has become a center place to demonstrate the power of the art and craft, strengthen the friendly ties between the nations.

Taking this opportunity, I would like to express my deep and sincere appreciation to H.E. President of Uzbekistan Shavkat Mirziyoyev for the initiative of organizing such a prestigious event and gathering craftsmen and people of art from more than 80 countries of the world.

I am especially pleased that Kokand City has been awarded Craft City status for woodcarving by the World Crafts Council. The Craft City network has over 30 cities and regions across the world. Each has made a written application and been visited by a panel of experts to demonstrate its commitment to a specific craft, a supporting infrastructure and support of its local government. So, on behalf of World Crafts Council my congratulations to H.E. Mr. President, all the people and craftsmen of Kokand City. Well done.

As President of the World Crafts Council International, I have had the opportunity to travel to many countries across the globe to see craft in all its many forms.  I have been struck by the incredible skill, ingenuity and creativity of crafts people as well as deeply humbled by the long traditions of craft that continue to practice across the world.

The capacity of human beings to craft extraordinary things, to go beyond what is necessary and make even the most ordinary things into something special and a pleasure to hold and use is what makes life joyful.

It is in the human nature to make. It connects us to the physical world.

I have seen craft expressed through many different cultures from horse hair weaving in Latin America, indigo dyeing in South East Asia to wood carving and ceramic arts in Central Asia. Each expressing the particular traditions and heritage of those countries. But at the same time, there is a common desire across those national divides to make which unites us in our common humanity.

We need to sustain these craft traditions and ensure they are supported and nurtured for the future. We need new generations of craftspeople who can, not only provide us with beautiful things, but bring those skills to help address the problems of our world.

I know from my conversations that, here in Uzbekistan, you value this and invest to support its future. As a result of policy to revive the old traditions and schools and wide-scale support to craftsmanship the number of skilled craftsmen in the country has increased significantly in recent years, new types of craft and applied arts are developing, the international engagements of the local artisans are expanding. I strongly believe that Uzbekistan has a bright future for handcrafts and art.

I would like to thank you for your hospitality and warm welcome and for your commitment to craft here in Uzbekistan.

I hope to see all here in Kokand in 2021 at the 2nd International Handcrafters Festival.

Dr Ghada Hijjawi-Qaddumi: An enduring legacy
Anxi: A city of rattan and iron
From Aotearoa to Uzbekistan: New Zealand in the Zar Festival of Gold, Bukhara
Asif Shaikh and Aziz Murtazaev ✿ A dialogue of print and stitch
Sandra Alfoldy ✿ Global Peace Through Craft: The Formation of the World Crafts C...
China welcomes the craft world
Scenes from the Americas Crafts Festival in Cuenca