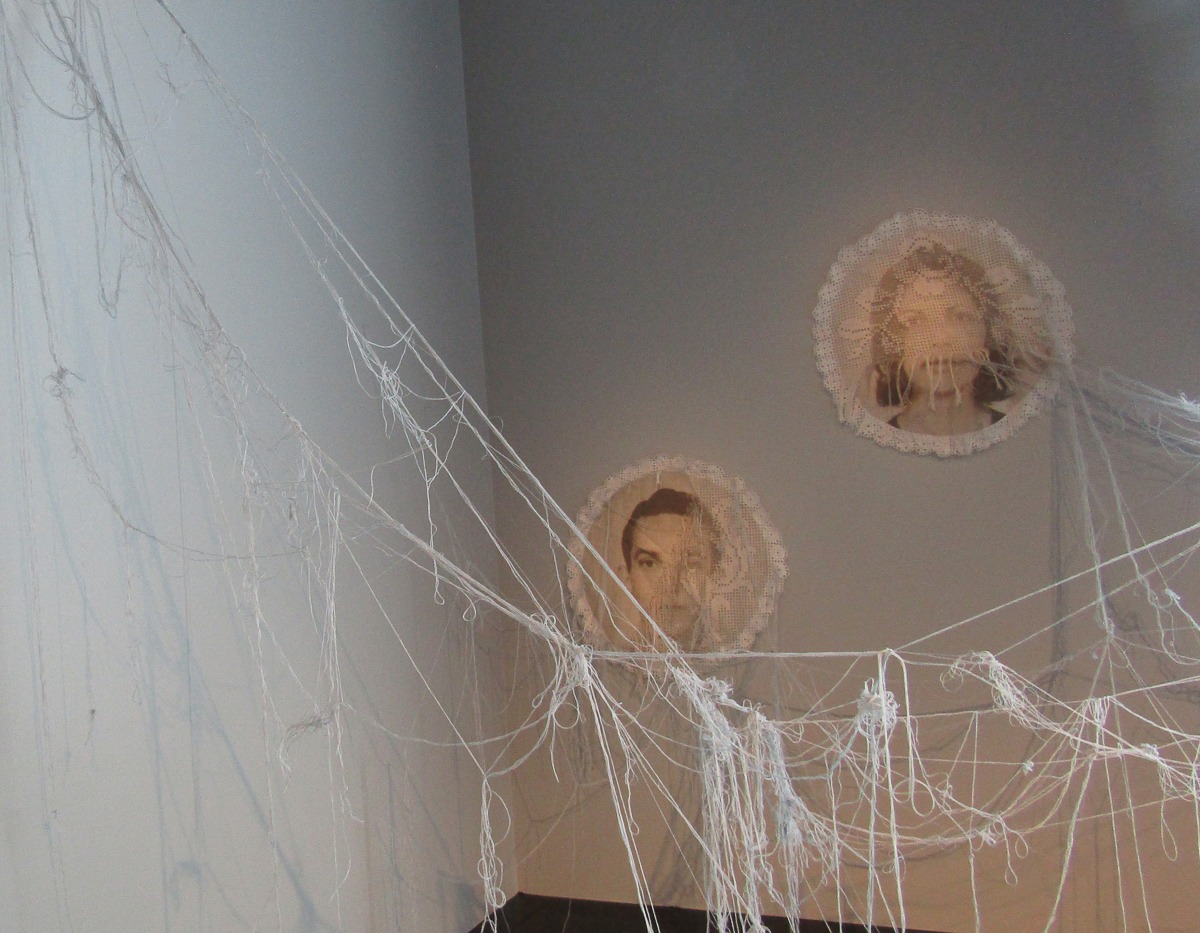 Pamela See finds that the embroidery exhibition Labirinto by Christus Nobrega offers a post-digital means of housing the past.

I grew up as a first-generation Australian surrounded by remnants from the lives of my parents in South-East Asia. Amongst the most intriguing were pre-Kodachrome black and white portraits of relatives and intricate needlework.

Subsequently, upon entering Labirinto I was greeted by a sense of familiarity. I haven’t had the privilege of meeting the internationally acclaimed artist and academic from Brazil. However, it was as though the holes in the lace provided an entry-point for my own memories.

During February and March 2020, Artisan staged the fifth exhibition of this body of artwork by Christus Nobrega. It was comprised of photographs digitally reproduced from his family album onto linen banners. The siblings depicted were forced into the care of relatives and religious institutions due to circumstances extenuating from the death of his grandfather. His grandmother survived by making labirinto, a type of lace.

Endemic to Paraiba, from which the Nobrega family originated, this technique was distinct from the other lacemaking traditions which emerged during the sixteenth century. At the time, lace was either bobbin woven or needle-point stitched.

Although labirinto utilises elements of the latter, the method is subtractive. Several of the prints, such as The Nun which featured the photograph of Nobrega’s aunt with a member of the church, were interrupted by selective snipping and meticulous re-stitching.

The traditional patterns were defined by a concatenation of holes. European audiences may relate to these compositions by way of devotional lace-pictures. Emerging during the fourteenth century, these depictions of saints were cut from parchment by nuns. According to Samuel L Goldenberg, from the New York-based lace importers Goldenberg Brothers, all lace-making traditions evolved from these European convents.

During the late Middle Ages and the Renaissance, the applications for lace grew from being exclusively ecclesiastic to adorning royalty and nobility. A subsequent lace-making industry developed amongst the peasantry. By the sixteenth century, lace making patterns were being disseminated through books.

From basketry to embroidery, the circulation of patterns has played a role in community building amongst women in many cultures. This is with a particular emphasis on intergenerational exchange. This was accentuated during the mid-nineteenth century in Europe and North America by the proliferation of Women’s Magazines containing patterns.

The practice was revived as part of the Third Wave Feminism “craftivist” movement. The term was coined by writer Betsy Greer who instigated the movement in the wake of the September 11 terrorism attack in New York in 2001. Greer, who bears no relation to the Second Wave Feminist Germaine, advocated the staging of small-scale interventions. These happenings were consolidated using the internet. However, groups like the Calgary Revolutionary Knitting Circle hark back to the First Wave of Feminism when suffragettes brandished hand-stitched banners. Craftivism is equally associated with these larger political engagements. Yarn bombing is amongst the practices.

These two contrasting aspects of Craftivism can be applied to the installation Siblings. The portraits of the displaced Nobrega children are deconstructed, with the threads extending into a sizable web of yarn. The intervention is both intimate and public, in both subject matter and scale.

This evocative gesture is laden with the sadness of maternal loss. Yet an element of connection, possibly hope, remains. It is not unlike the unfurling of string with which an explorer entering a labyrinth might seek their return. That in thread resides memory is perhaps the most affecting attribute of this compelling compilation of compositions.

Post-digitalism, for all intents and purposes, is a movement difficult to define for its encompassment of opposing binaries. Florian Cramer, in his chapter “What is Post-digital?” published in Post-digital Aesthetics in 2015, described ‘digital’ as the breaking up of data into “discrete” and “countable” units.

This technology was born of a union between papercutting and tapestries. The invention of Jacquard weaving loom punch cards in 1806 would inform the development of computer data tape, a technology that would remain in use up until the 1970s.

Cramer continues to describe ‘post-digital’ as both something “…after… digitalisation” and, conversely, “…functionally repurpos[ing]” “older media technologies”. In Labirinto, analogue photographs from the twentieth century were translated into twenty-first-century digital prints. They were further digitised using a technology that dates back to the sixteenth century.  Subsequently, the exhibition epitomises “the post-digital hybridity of ‘old’ and ‘new’ media.”

It is a homage to a family matriarch by her grandson, a personal testimony made accessible through a craft tradition and the digital technology it informed. There-in lies the resonance of this body of artwork: dichotomies of estrangement and familiarity, the masculine and the feminine and the digital and handcrafted.

Pamela See (Xue Mei-Ling) is presently undertaking a Doctor of Philosophy at Griffith University in Queensland. Her research focuses on contemporary applications for papercutting. She has studied the technique in a number of provinces. Her artwork features in several institutional and corporate collections including The National Gallery of Australia, The Australian War Memorial and the Art Gallery of South Australia.