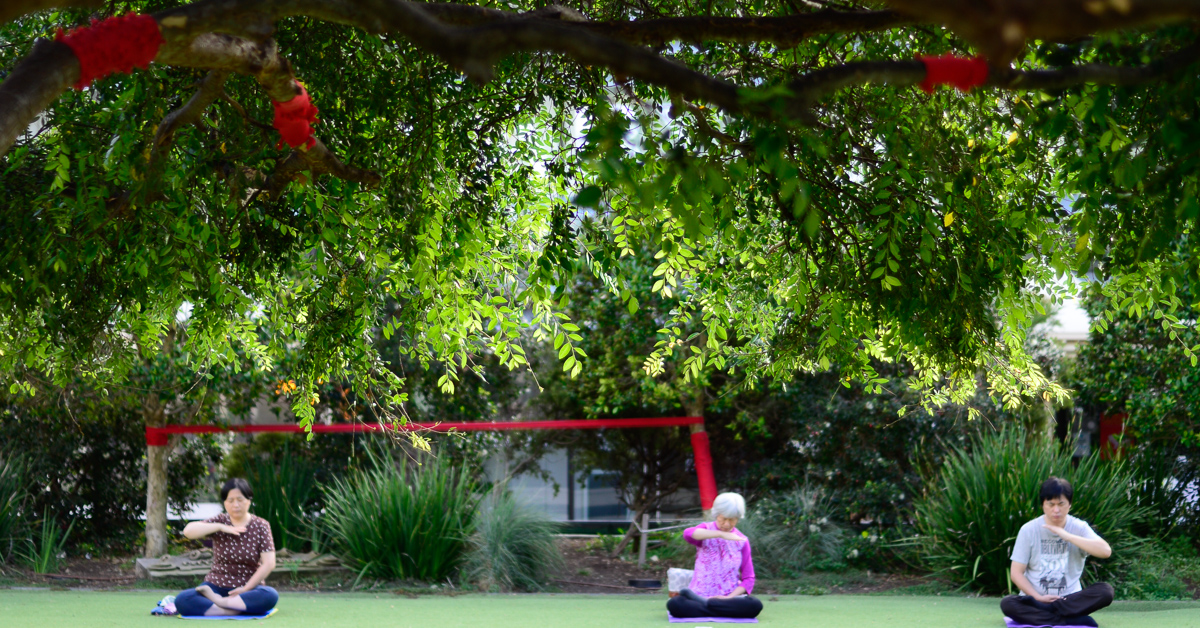 Alma Studholme follows the red line and finds both hope and fear in an installation by Pamela Leung.

I first encountered work by a Hong Kong Australian artist Pamela Leung in group shows in Sydney where we exhibited side-by-side. I found her mixed-media installations and fragile paintings on rice paper intriguing because of the palpable tension between their aesthetic beauty, dark undertones contained in their meaning and labour intensive ways in which they were constructed.

Leung’s practice often displays a strong craft and ritual-based, repetitive component, through which she expresses and establishes this tension. Her latest outdoor site-specific installation Where is the Red Line? is not different. An acute awareness of the dualities of life, of the interrelated flow between Yin and Yang, positive and negative aspects of life, seems to be a constant and recognisable feature of Leung’s art practice. 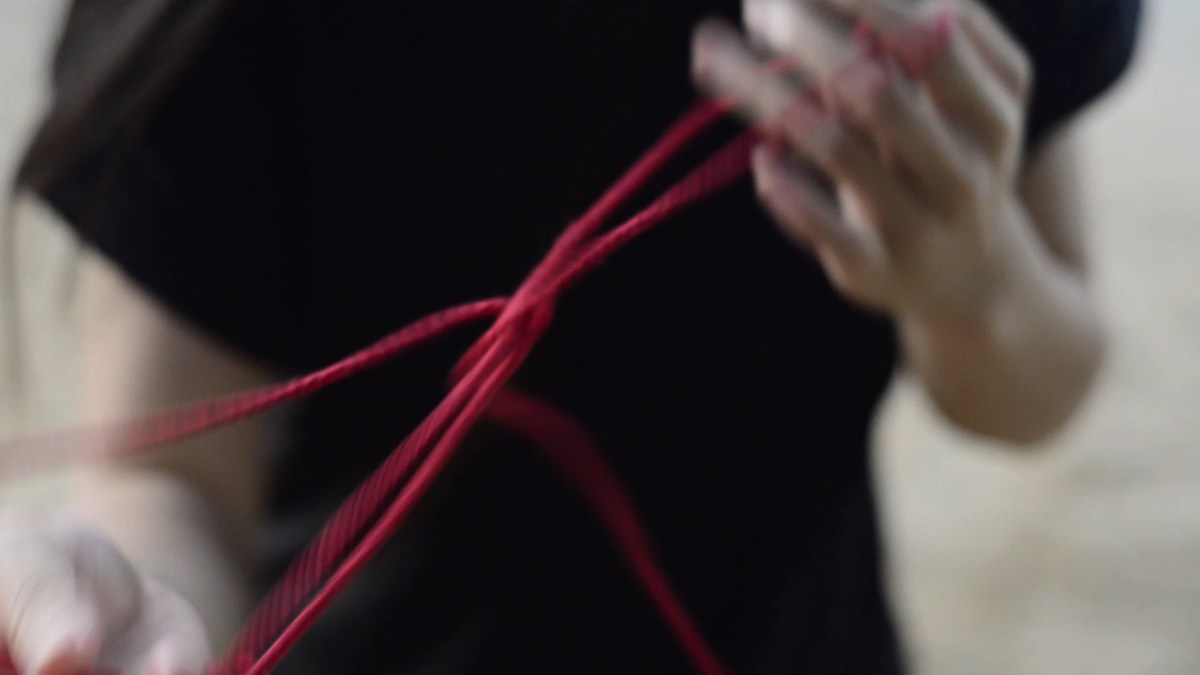 The installation Where is the Red Line? and an accompanying short film Red Line Story were commissioned by Willoughby City Council in Sydney, Australia, as a part of a curated group exhibition Parallel Wanderings. The exhibition is one of multiple events of the Chatswood Year of the Tiger Festival held in the summer months from 27th of January to 20th of February 2022. It is also part of Human Beings and Nature Are One exhibition series delivered in partnership by Willoughby City Council and Institute for Australian and Chinese Arts & Culture. The featured work shows a continuation of Pamela Leung’s material and metaphorical explorations of red line as a motif.

Spreading across three major areas; the Art Space on The Concourse, The Concourse outdoor area and The Concourse Urban Screen; the scope of this particular Leung’s project is the largest to date and presents an expansion of her art practice to working with teams of people.

However, the initial work on the installation, which lasted about several weeks, comprised of Leung’s solitary labour. Just like the work on almost all of her previous projects, it was both meditative in nature and was marked by tension contained within the physical act of preparing 5,000 meters of red cotton string. Leung was first cutting the string into 13 inches long sections, then knotting it back together, pulling each time to secure the reconstructed line into 9 inches long sections between the knots. The link to the symbolism of number 9 in Chinese culture is deliberate. In Leung’s own words, it reinstates “the everlasting line.” One of many layers of meaning behind it refers to Leung’s personal immigrant story of relocation from Hong Kong to Australia; telling of “a life broken, but then put back together, reclaimed and restored to strength.” 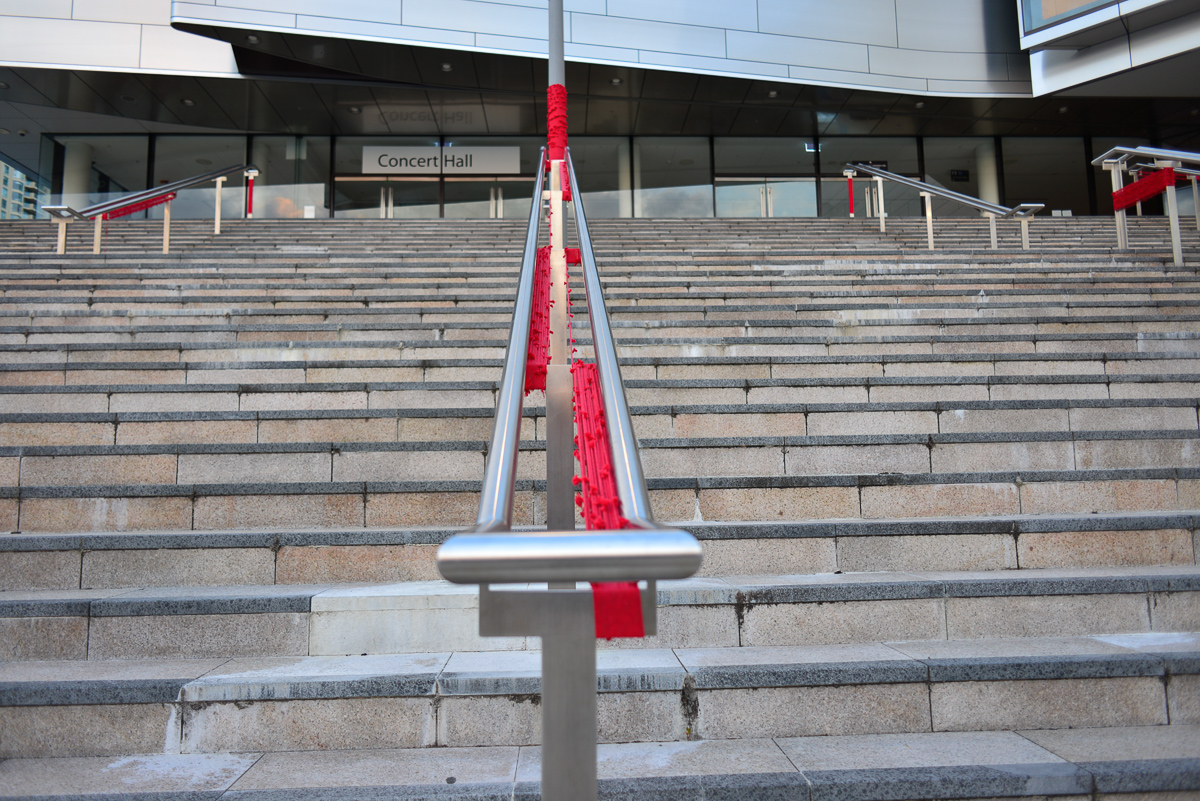 Being amongst one of many pairs of hands helping Leung to install her work, I was presented with an opportunity to experience first-hand the labour intensive yet meditative nature of her work. It took a full week to tie the red cotton string around all the varied architectural elements of the site. This included concrete poles, signs, lamp posts, railings, plant troughs, bicycle stands, as well as trunks and branches of trees and bushes within the green park area in the middle of the urban square. During the three days I participated in this process, I had a chance to listen and delve deeply into the meaning of the project.

People would approach us, curious about what we were doing with the red string and Leung would talk about two sides to her story. She would explain that in Eastern philosophies red string symbolises protection, faith, good luck, strength, the connection between one and other, and unity with the universe. She would say that there is a belief in an “invisible cosmic red string” that ties couples into marriage and love, and once tied by fate, this string cannot be untied. Leung also talked of a belief that the same cosmic red string connects people into seemingly random, chance encounters, just like the very interactions happening between a curious passer-by asking her questions and herself. “This is a positive side of the story,” she said. 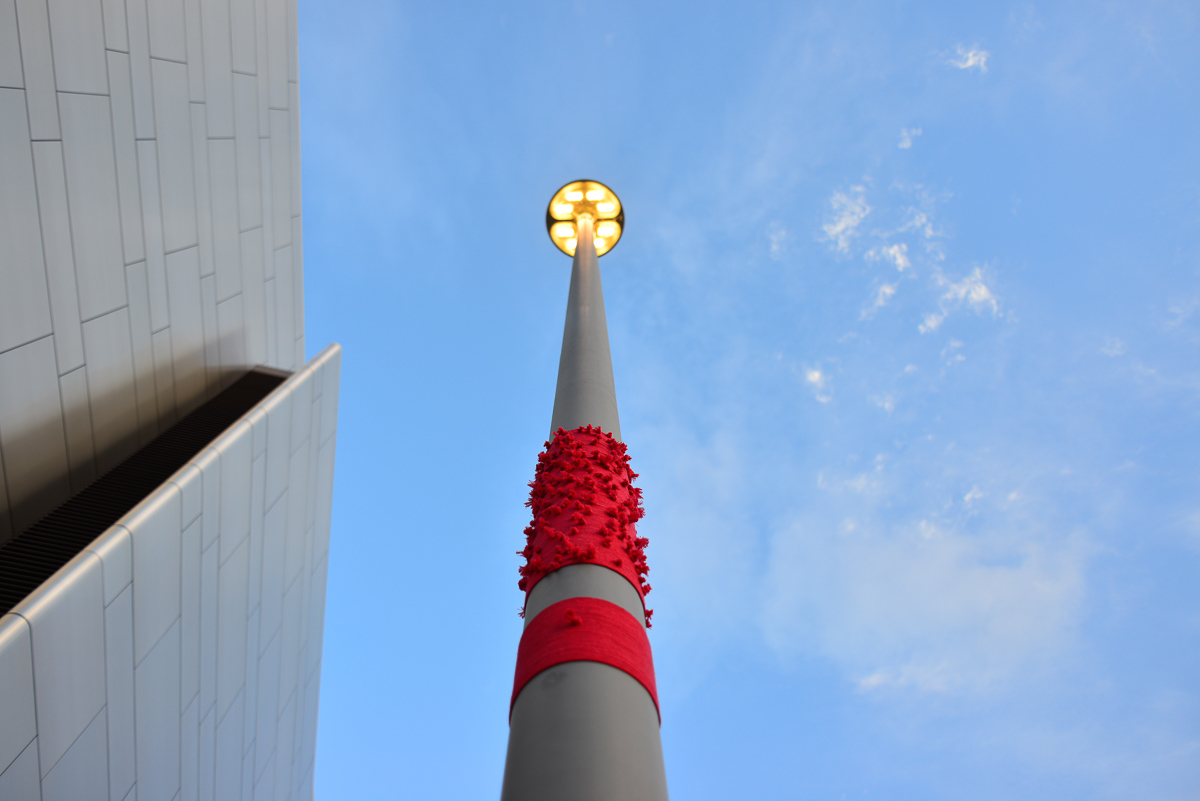 “But there is a negative side to it as well,” she continued. “The cosmic red string is also telling us that we are constantly being watched and controlled by the forces we cannot escape, avoid or fully comprehend. Also, if we don’t know where the red line is, how do we avoid bad consequences to our lives if we cross the invisible red line?” This is why the installation is titled Where is the Red Line? and when we look around the whole of the site we see that the red line is everywhere.

Pamela Leung’s short film Red Line Story accompanies the installation by being shown on a large urban screen above the installation site. Working on it additionally helped me to become attuned to layers of meaning within the story Leung entrusted the video artist Brett Studholme, performer Natalie Quan Yau Tso, composer Adrian Leung and myself as editor, to retell with the film. 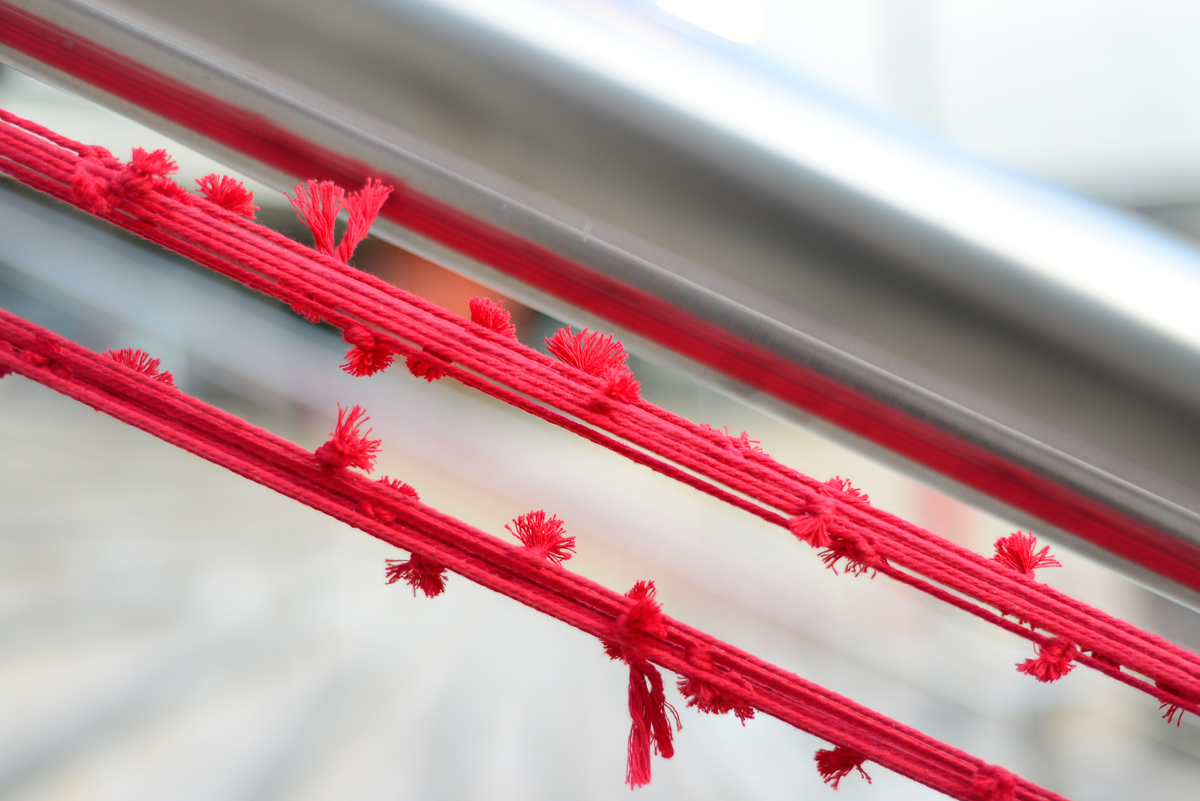 The red string features as the key object within the story told through music and dance. These elements set the dual structure of the film, enacting an existential drama between light and darkness. In the beginning, the music is light-hearted, joyous and innocent. A girl dances on the beach and finds a small red string brought to the shore by waves. As she continues dancing, she ties the string around her little finger to indicate she found her “soulmate.”

But then the music starts changing and becomes increasingly dark. The girl wanders into a cave and faces darker aspects of the red string. She follows it into a forest where she finds long strands of red line tied around trees, blocking her movement at every step. Her dance becomes more and more hectic and troubled. 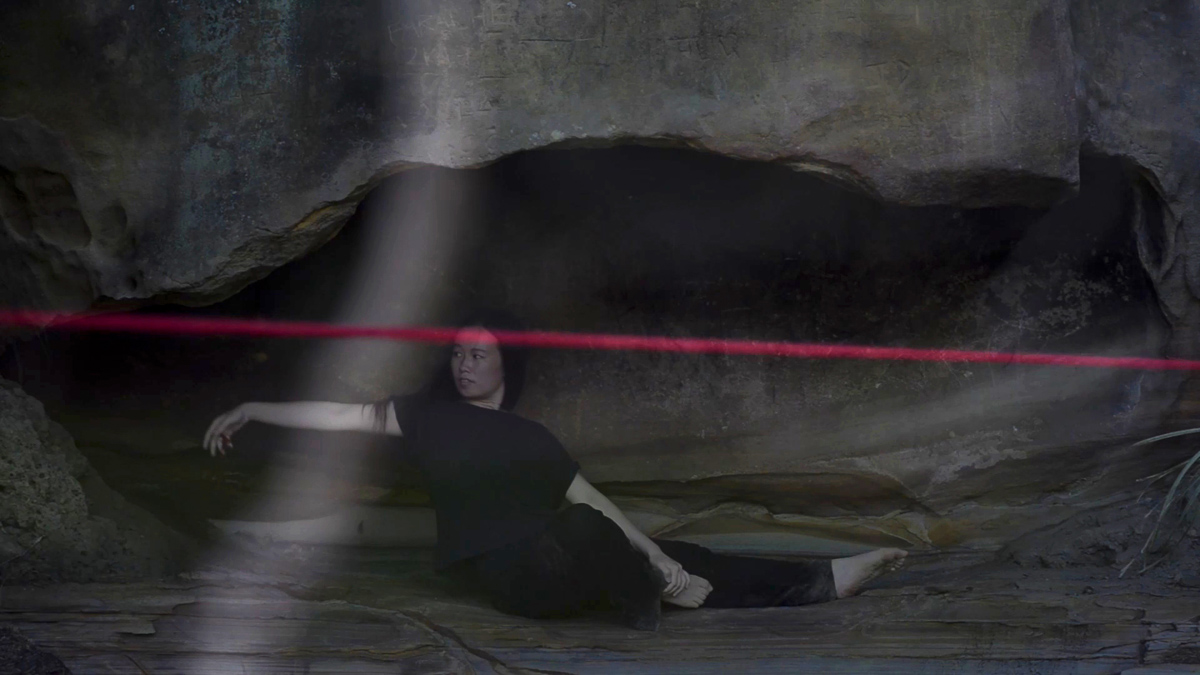 A black face mask appears on the girl’s face. This introduces yet another layer of meaning, related to the red line in the context of the current pandemic. The girl’s hands are tied by the invisible red string and she struggles to free herself from it as she continues dancing under its spell. Followed by a magpie, a bearer of good luck, she finally manages to set herself free. She learns through experience about the precarious balance between the dualities of life, kept only loosely apart by the invisible red line “drawn” in the sand. 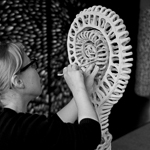 Alma Studholme is a Sydney-based Croatian Australian multidisciplinary artist working across ceramics, sculpture, installation, performance and video. Her work draws on her scholarly background in philosophy and religious studies. She holds a doctoral degree in Arts and Social Sciences from the University of Sydney for her interdisciplinary research in cognitive sciences, neurology, contemplative religious traditions and art practice. Currently she is in her last year of completing a fine art doctoral specialisation in ceramics at the National Art School in Sydney. When working on video projects she regularly collaborates with video artist Brett Studholme. Their short films were selected for exhibitions and festivals in Australia, Belgium, Italy and UK. They also worked together on Pamela Leung’s film Red Line Story commissioned for the 2022 exhibition Parallel Wanderings in Sydney. Visit www.almastudholme.com.