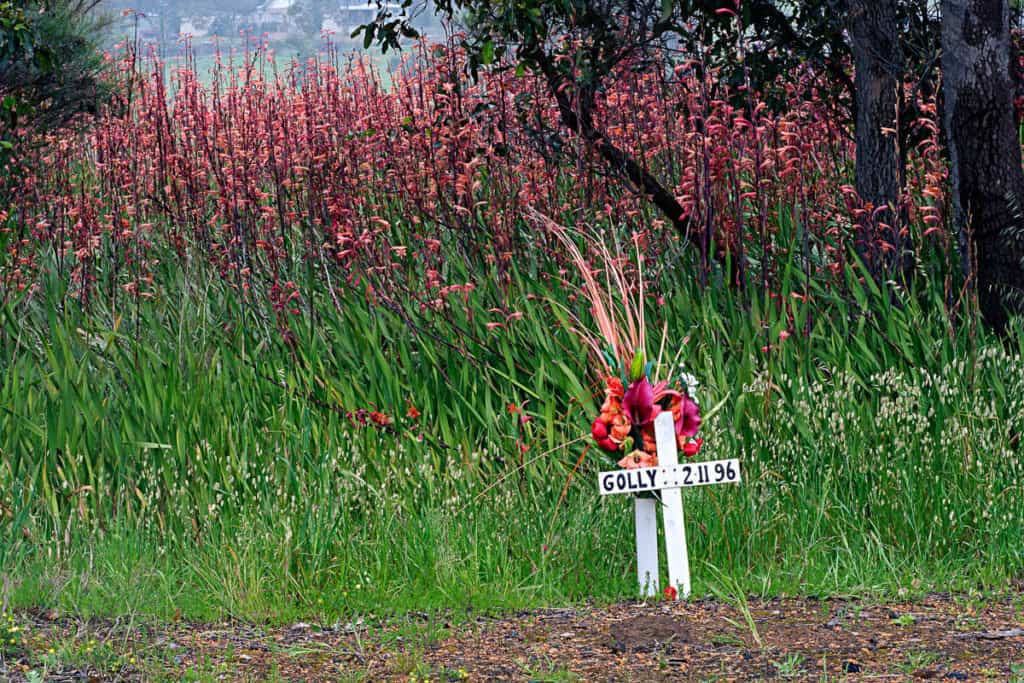 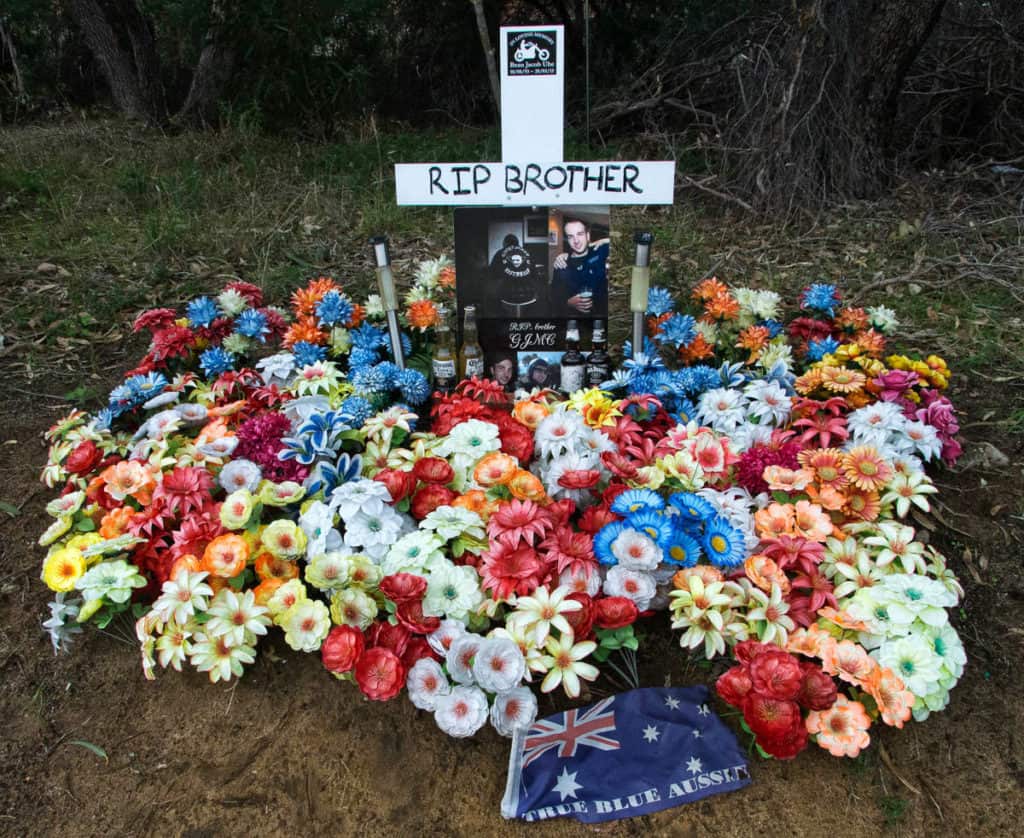 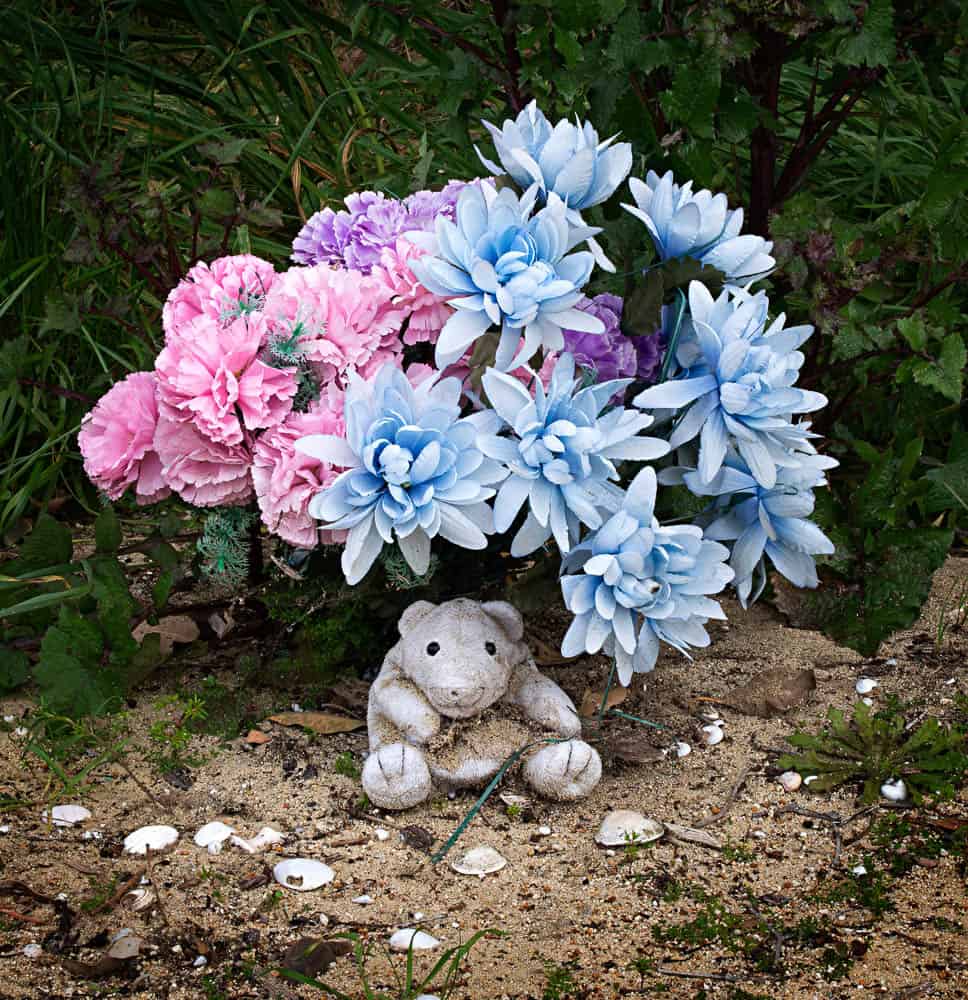 Guy Vinciguerra’s images expose to our view sites of memorial usually seen only fleetingly as we speed by on our sure and confident way to our destination. Glimpsed occasionally here and there in the landscape, in this space they are brought together in an evocation of what Paul Virilio conceptualised as a “museum of the accident”, a gathering of instances that present evidence of the inherent failures of the technologies of our lives, as opposed to the lauding of our efforts at progress. They are individual, personal representations of a communal trauma particular to this era of fossil-fuelled technologies, an era in itself passing. The Sacred has been defined as something “set aside” and dedicated, a discrete fixed point where meaning gains coherence.

In this space lies the opportunity to pause and to contemplate these memorials in their multitude and pathos, saturated with colour and paradox, raw sorrows opened to the public gaze. We are invited to look, sanctioned to be voyeurs. Every feature is in sharp focus, like the heightened reality experienced in moments of shock, perceptions are intense with detail. The sumptuous colour contrasts with the greys and greens of ground and landscape. We are confronted with the juxtaposition of beauty and the banality of objects, of ordinary peoples’ lives shattered by an extraordinary event. The Sacred is unifying, it represents the shared interests of a community, it can inhere in things, in symbols and objects, and in places as power and resistance. These images are Sacred Places.

GPS coordinates expose nothing but the bare register of a 40,000 kilometre pilgrimage. The “where” could be anywhere; the “when”, whenever least expected. The sites are no-place, always in-between a “here” and a “there”. We will not rehearse the worn metaphor of journey on the way of life, supposing purpose or destiny, imposing patterns of continuity. Seen like this, the random discontinuity of events reigns. Of what consequence would sequence be, a futile imposition of order on fundamental disorder.

In pursuit of memorial, the photographer repeatedly sets out, turns back overwhelmed with the grief of others, then returns to the road, resigned to the quest.

To eyes alert to signs, everything is sign. Wherever two things intersect: a cross. In the distance, piles of refuse gather themselves into arrangements, falling into a heap at close range. A reclusive site might keep itself to itself, or suddenly take substance at his approach. The pitch of the ground hides or reveals according to chance, the timely and the untimely at once present.

There’s a flickering at the edge of vision before something appears, an intuition informed by the habitual looking-out-for, by attention longing to be claimed. Something registers on the skin. And here it is: set aside in the verge, in a discrete ordering, the tones of the silenced singing out. The place beckons and does not want to be left alone.

His approach to the scene is circumspect and ritual. He keeps his gaze to the ground until almost upon it, mitigating the imposition of meaning and its attempts to cohere. He tries to catch absence uninhibited as it is in-itself before perceptions form, when it is raw, and he is raw, and there are no names. The Sacred is a discrete place.

Folklore has it that indentations in the ground mark a door to the underworld. Potent with awe and reverence, they radiate power and resistance, and the promise of communion with those already accomplished in rites of passage. These small theatres of acquaintance are loci of memory, at their heart evocations of wishful thinking. The song and dance of visiting and tending becomes ritual.

Language falls to its knees, it struggles to its feet with formulas appropriate to the circumstance as it is understood, or not understood. We teeter, both bereaved and blessed, for at any moment we might fall through a rent in the fabric of our lives.

In the sublime and abject literature of contemporary movement, in threadbare sentiments and everyday objects, extraordinary sorrows are expressed time and again until they fall into place: the whole Simpson family bears witness. The sites perform a particular grief, it accumulates in the grasses, beneath the trees, along the cyclone fence. The Sacred inheres in pitiful remnants: in the ‘still-life’ with intimate trinkets, in the glaring colour of petrochemical flowers mingling ironically with Everlastings, in the faces that fade behind brittle cellophane, in the incongruous cans and Quran, Buddha and the beer bottles. ‘Love’ is wrought in iron and plastic.

The objects are cyphers for the inaccessible, the irretrievable. Here particles joggle and atoms unhinge, the dissonance struggles to resolve. The Sacred maintains paradox, it draws together and unifies, it keeps separate and distinct. It is a fixed place on shifting ground, cause and effect are in question. The sites uphold these unstable elements, they keep events in existence – having happened, they are still happening, everything we do is eternally being done. Dense with moment in the bone-aching hollow it is ‘always and forever’, a perpetual duration of the present.

The bereaved look to those initiated in death as oracles for instruction on how to live: ‘Dream’ is inscribed on a rock. They press us with persistent mantras of forever: ‘forever in heaven’, ‘forever in our hearts, ‘forever 8 years old’. Old enough to die, they fill the gaping future with echoes of broken promise.

We might shirk the duty of remembrance, and hand over authority: a beloved and bedraggled bear cable-tied to a pole, burdened with our vigil. We might blame the victims for our disturbance, for our nostalgia, that deep ache for home. True tragedy is that which we bring upon ourselves, playing a part in our own downfall. Asleep at wheel, or mesmerised by tricks of light, we fall into a moment of absence. Where one possible world slams into another, the force and aftermath meld them across time: a note from a child not yet born, to a father already dead.

Progress is marked by stops and starts, and its technologies contain their own failures; cars necessitate a certain type of accident, and this particular type of memorial. The multiplicity of these singular events combines in one greater phenomena of ‘accident’. There is a commerce here of magic, and a wager – that the photographer, in displaying the accidents of others might avert his own, and by some sleight of hand momentarily distract his fate.

In the distance, the come and go of traffic sounds the dharma of the passing.