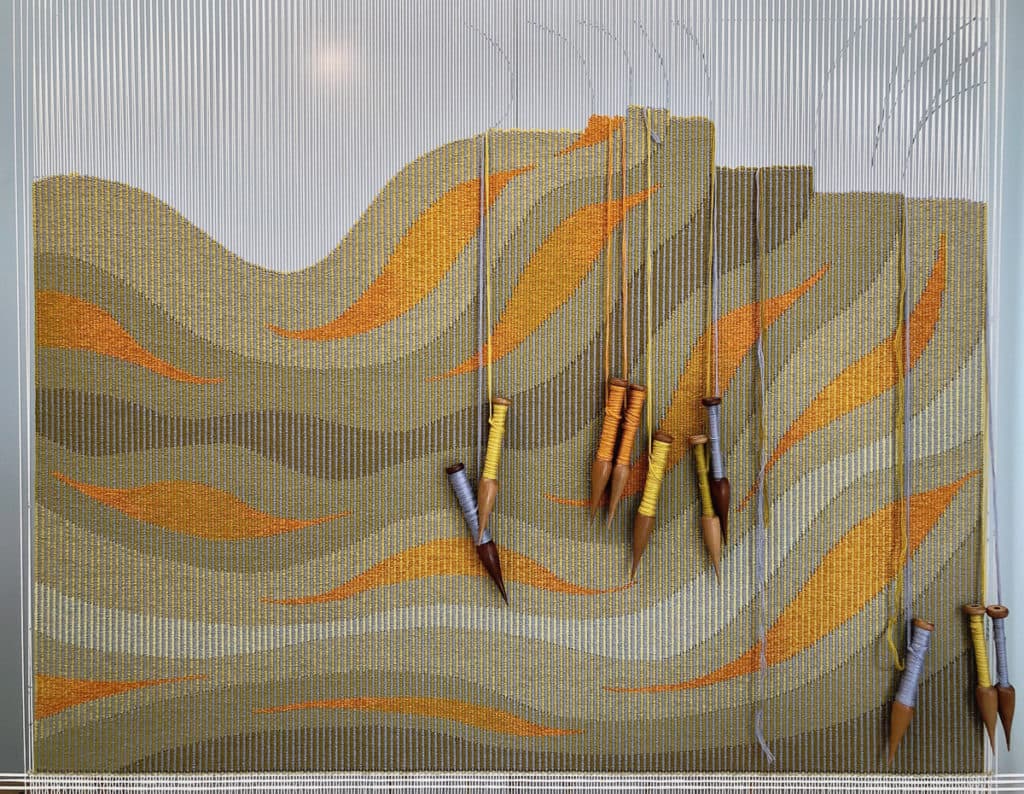 In an age of constant technological innovation, the tapestry medium could seem like an anachronism. It persists with the same tools, the same yarns and, most crucially, the same need for a dedication of time and attention. The passage of time inherent in the craft has inspired the contemporary tapestry exhibition Take Time, currently showing at Craft ACT Gallery until 6 July. It is a group show with an impressive cast of renowned Australian textile artists, including Cheryl Thornton, Daniel Edwards, Diana Wood-Conroy, Dimity Kidston, Ema Shin, Patsy Payne, Rachel Hine, Suzanne Knight, Tim Gresham, and Valerie Kirk. Each incorporates the concept of time into their contemporary tapestry practice. 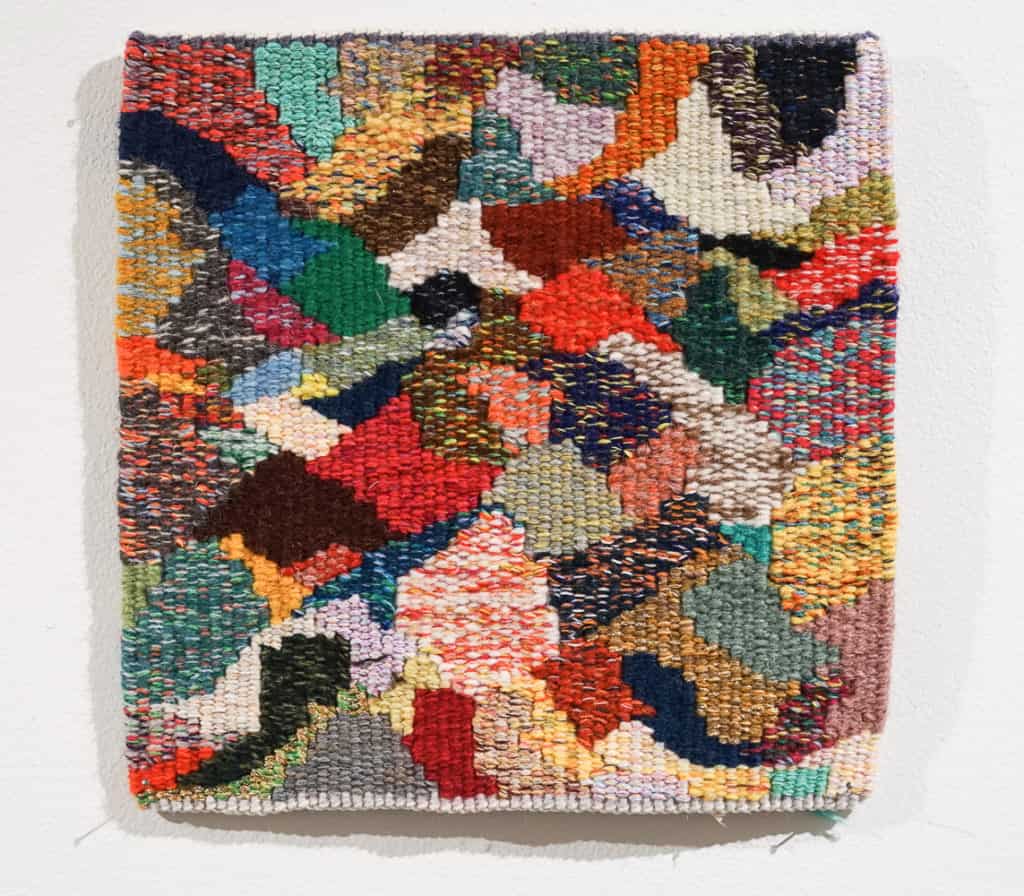 The theme of time is a broad one, and the artists in Take Time have developed diverse interpretations. Daniel Edwards’s work explores time through family heritage and a sense of personal nostalgia. In Take Time, Edwards presents five tapestries depicting colourful abstracted landscapes inspired by the Nilgiri Hills of Tamil Nadu. This region of South India holds significance for Edwards for the time his parents spent there as children, as well as the time he spent imagining India as a cultural homeland that he had never visited. 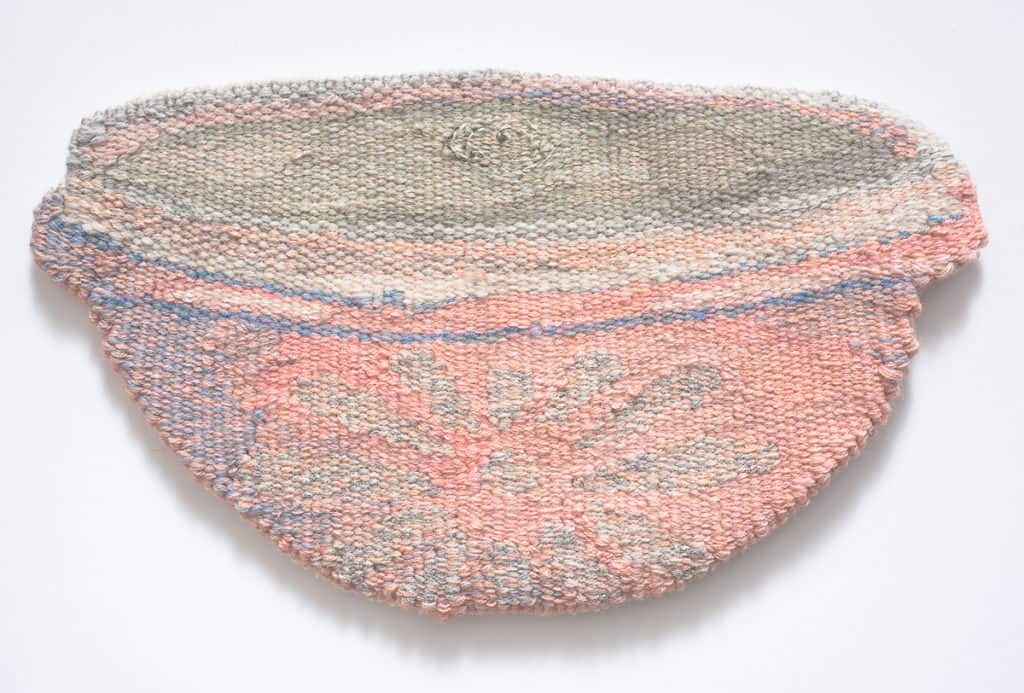 Knight, Suzanne, What dreams are made of #2(apricot bowl), photo: Brenton McGeachie

Nostalgia also plays a role in Suzanne Knight’s work, which expresses the changing nature of domesticity and the roles of women over time. Her work presents a visual echo of traditional women’s work going back generations, from fifth-century tapestry weavers to twentieth-century Tupperware party hostesses. Knight’s sensitive woven images of vintage domestic plastics honour these symbols of modern housekeeping and domestic labour with the many hours of dedicated work that are inherent in tapestry weaving. Through the alchemy of time spent, these works transform the mundane into jewel-like artifacts. 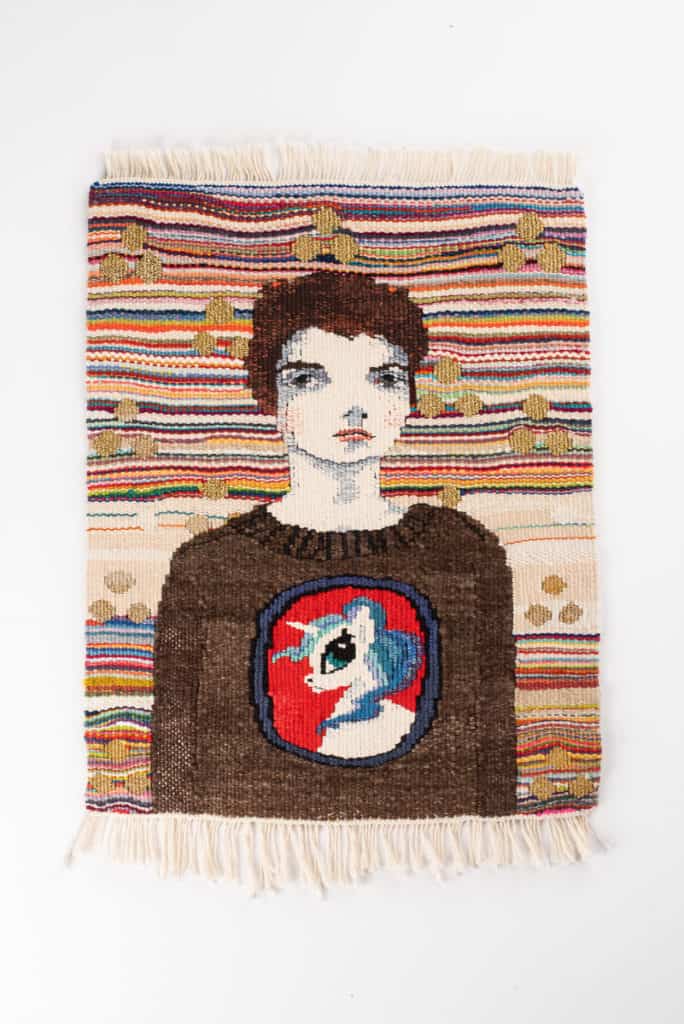 The exploration of gender roles is continued by Rachel Hine, who looks back at the figures depicted in medieval tapestry and marks the changes in how we perform gender from then to now. Her tapestries are a pastiche of famous tapestry subjects such as the Lady and the Unicorn and the soldiers of the Bayeux Tapestry. Hine subverts these characters by queering them, casting a gender lens upon her own images as well as those from the tapestries of old. In Hine’s work, the unicorn, once a symbol of male sexuality, is depicted as a “My Little Pony”, from contemporary pop culture, which are characters marketed to young girls. Many of Hine’s works depict young men whose appearances are at odds with the militaristic men to whom we are accustomed. They are instead soft and androgynous, expressing a progressive image of masculinity. This exploration of gender in tapestry is once again underpinned by the traditional perception of textiles as “women’s craft”. Hine’s subversion of the subjects of tapestry encourages the viewer to question these traditionalisms. 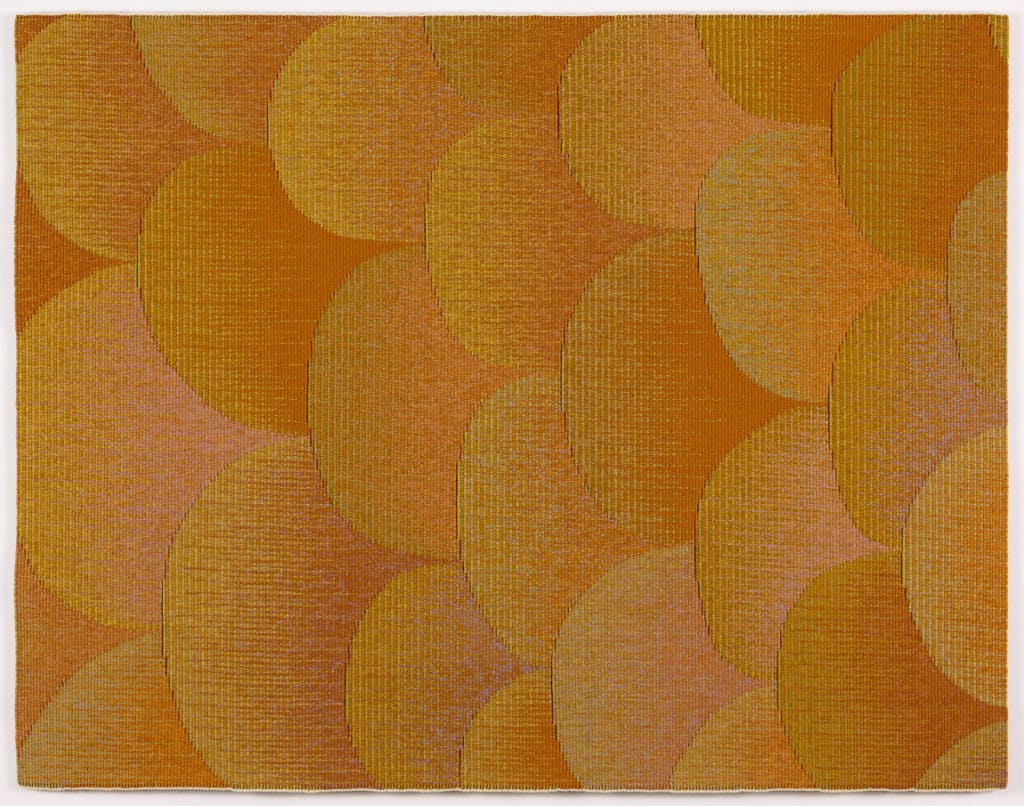 While Hine looks back through historical time, Tim Gresham’s focus is dedicated to the time taken to weave the tapestry itself. Tim describes his practice as “very much about time and rhythm, as well as the visual effects of light, colour and pattern.” He begins his works by choosing a set of rules to work within. As the tapestry progresses over time, a repeating pattern reveals itself. These patterns echo the fractal patterns that we find in nature, visual representations of our universe’s rules and systems.

Though it contains such a diversity of conceptual matter, the work in Take Time pivots around a central focus: the slow and contemplative process of tapestry weaving. These works, with their rich textural qualities and flecked yet vibrant colour, demand prolonged observation. As art historian Anne Brennan observed about the exhibition, it encourages you to enter “the slowed-down time of the artist, the extended temporal space required to set in train the incremental evolution of these images.” This is a process that resists immediacy and encourages deep thought, a practice we should all find time for.

Isabelle Mackay-Sim is a local artist who is passionate about enriching and promoting the Canberra art scene. Isabelle currently works from a studio at the ANU School of Art.