Gary Wornell ✿ A witness to the beauty of making, from Finland to Nepal 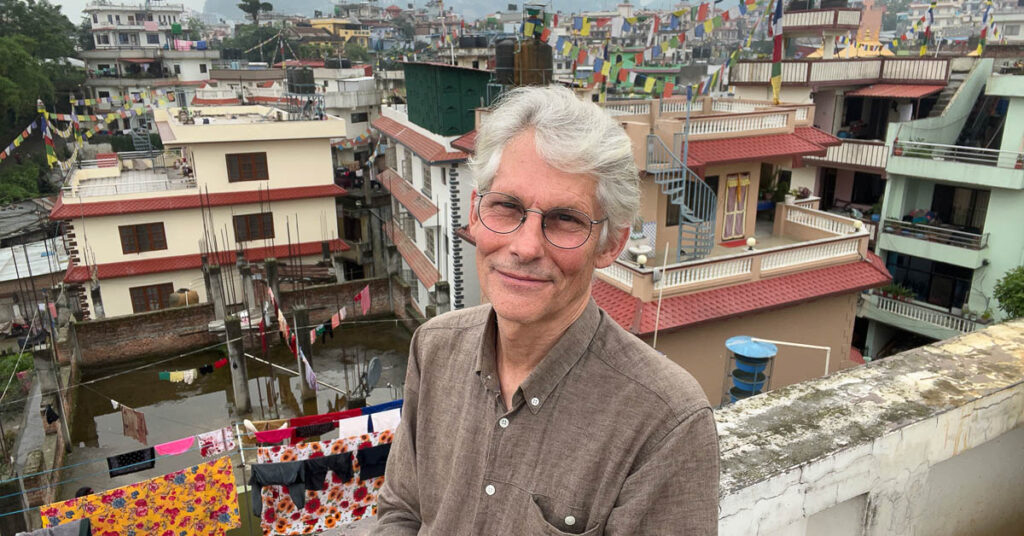 Gary Wornell is a regular contributor to Garland. His stories of craft in Nepal are beautifully rendered in words and images. Below, Gary shares his remarkable life journey that connects Finland, ceramics, England, digital technology, printing, photography and Nepal, where he returns to craft.

What’s been your educational path?

To give a little background into my interest in craft and why I am inspired to write about the traditional crafts here in Nepal I’ll start back in 1970 when, having moved from Canada to England at the age of 17, I studied Ceramics at University and set up my studio on the East coast of England where I worked for 20 years until moving to Finland to teach at the University of Applied Arts in Helsinki in 1994. By that time I had become a Fellow of the Craftsman Potters Association and a Fellow of The Society of Designer Craftsmen. Making a living in ceramics was always economically challenging, but my love of working with clay continued in my new studio north of Helsinki until after six years of work I lost my rented work space in a court case with the landlord and after 30 years working with clay, I stopped entirely.

While teaching at Taideteollinen Korkeakoulu (now Aalto University), I taught myself computing, and when the digital camera revolution began I bought my first camera and followed my childhood passion as a photographer. I was fascinated by digital technology, formed a company and began to design websites using the camera as a visual tool. My first client was Nokia and I designed their online Global Based Web Learning System for 3G mobile networks. That was pure luck of being in the right place at the right time.

I felt for a long time that I had “thrown the baby out with the bathwater”, but in working with photography, the natural progression was to start printing, and I began to experiment coating a variety of uncommon substrates for inkjet printing, eventually sponsored by Epson, and invented the technology for printing on the world’s thinnest inkjet papers – Kozo – a 32 gm paper that eventually was marketed under the Signature Worthy brand. My coating techniques for the paper came directly from my relationship with my Terra Sigilata techniques in clay, and so the baby came back into the bath in another form. It was the craft of creating surfaces that inspired me and took me into a completely unexpected field of work.

My exhibitions had switched from ceramics to digital art and in 2012, I was invited to take part in the Kathmandu International Art Festival with one of my large custom-coated prints. When I came for the exhibition in November 2012, I landed at Tribhuvan International Airport and before going through immigration I said to my travelling companion, “I think I could live here”. It was an absurd but prophetic statement as I have now been almost ten years here in Nepal.

Which authors inspired you?

I read every book on ceramics that was available to me in the 1970s; books by Michael Cardew such as Pioneer Pottery, Bernard Leech’s  A Potters Book, Hamada’s Beyond East and West, Michael Casson’s The Craft of the Potter and magazines like Ceramics Monthly and the British publication Ceramic Review. I do little reading on crafts these days except the articles in Garland which I find hugely satisfying. I’m not really interested in technique as such when I write about craft although the way a material is intimately understood by the craftsperson always brings a smile to my face.

What do you look for in a topic to write a story?

It was the traditional crafts of the Kathmandu Valley that I soon discovered which mesmerised me. But it wasn’t the craft that I was most interested in. Of course, the works being created were remarkable for their skill, but it was the lives the craftspeople lived that fascinated me. I had lived that life myself for 30 years. I recognised quite early on that these age-old family-based skills would soon be lost as the children of the craftspeople chose instead to study higher education and leave the tradition behind. This was a rare moment in the cultural sea change that was taking place in Nepal and I wanted to record the life and work of these people before it disappeared.

Since those early days of photographing and interviewing craftspeople in the Kathmandu Valley, I have worked on projects with the World Bank, Poverty Alleviation Fund, Japan Social Development Fund as well as the Finnish Environment Institute travelling the length and breadth of the country discovering rural crafts of all types which are having new life breathed into them. It has been, and continues to be, a passion and fascination for me to discover what people can make with the materials they have at hand and what gradual innovations in design and function are taking place in these ancient traditions that are inspiring a new generation of practitioners.

Tell us where you are?

I am a permanent resident of Finland but for the last ten years, I have lived most of the year on the northeastern side of Kathmandu in a community next to Boudhanath Stupa called Ramhiti. People walk the streets, something you rarely see in Finland. I love the flow of women, children, dogs and street vendors going about their day. It is a very lively atmosphere to live in and contrasts hugely with my life in Europe. People always greet me, whether they know me or not as I go about town and I find that friendliness unique to Nepal. Kathmandu suffers from heavy pollution, poor infrastructure and daily challenges of all kinds which is a direct contrast to the developed European model. Surrounded by the breathtaking backdrop of the Himalayas I try to get out of the valley whenever possible into the hills where the air is clear and the snow-capped mountains meet the clear blue sky. 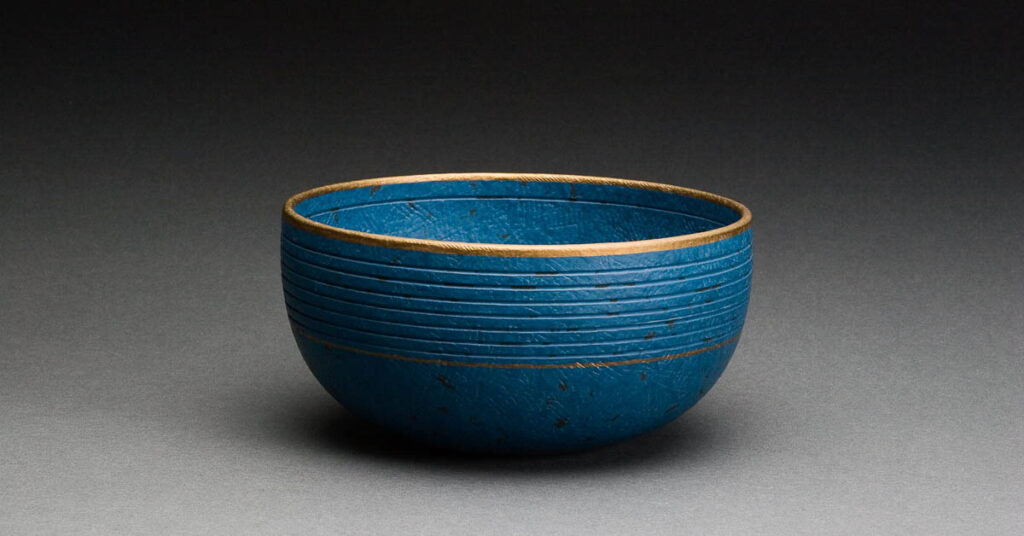 Gary Wornell is an artist, photographer, film-maker, master print-maker, photojournalist, author and independent curator. A Canadian citizen, Gary has lived for extensive periods in the UK, Finland and Nepal. He divides his time between Finland and Nepal. In the last three years, he has worked as OECD-Finland-EU Social Protection Systems mobile device video trainer in Kyrgyzstan, Ethiopia, Cambodia and Zambia. He is currently active as design and marketing consultant to the Nepal infant clothing enterprise – Kokroma.com setting up their online shop, social media presence and developing production tools and methods for the clothing brand’s workshop in Kathmandu. He is book designer, photographer and author of Treasure of Nepal, Maahenki Finland 2016 – ISBN-10 9523010824 and designer Co-Author of Crafting a New Future for Nepal’s Traditional Artisans, PAF-The World Bank Group 2018 ISBN-9789937036511. 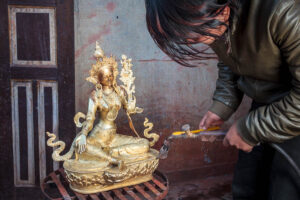 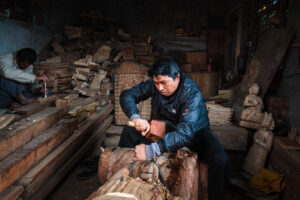 Wood carving in Nepal: How Buddha emerges every day - Gary Wornell is welcomed into the home of Ratnamani Bramhacharya, a Nepalese carver of immense skill and generosity. 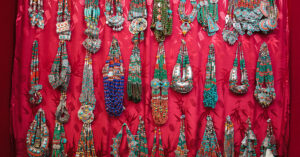 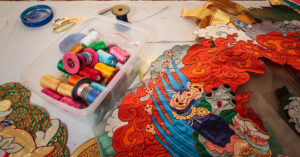 Silk thangka: An unbroken thread - Gary Wornell journeys to the Pullahari Gumba Monastery hoping to find Nurbu, whose life is dedicated to the tradition of sacred Buddhist imagery in luscious silk. 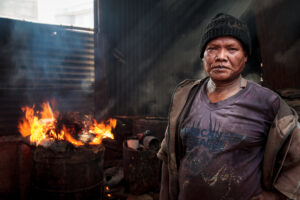 How deities are born: Bronze casting in Nepal - Gary Wornell spends an intense day in a Kathmandu bronze-casting workshop, witnessing the impressive resilience of Nepali artisans. 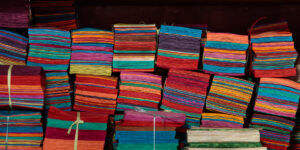 Colour thrives: The lokta paper makers of Kathmandu - Gary Wornell is captivated by the spirit of craft in Nepal and the success of Chhongnorbu Sherpa’s paper factory.