Wood carving in Nepal: How Buddha emerges every day 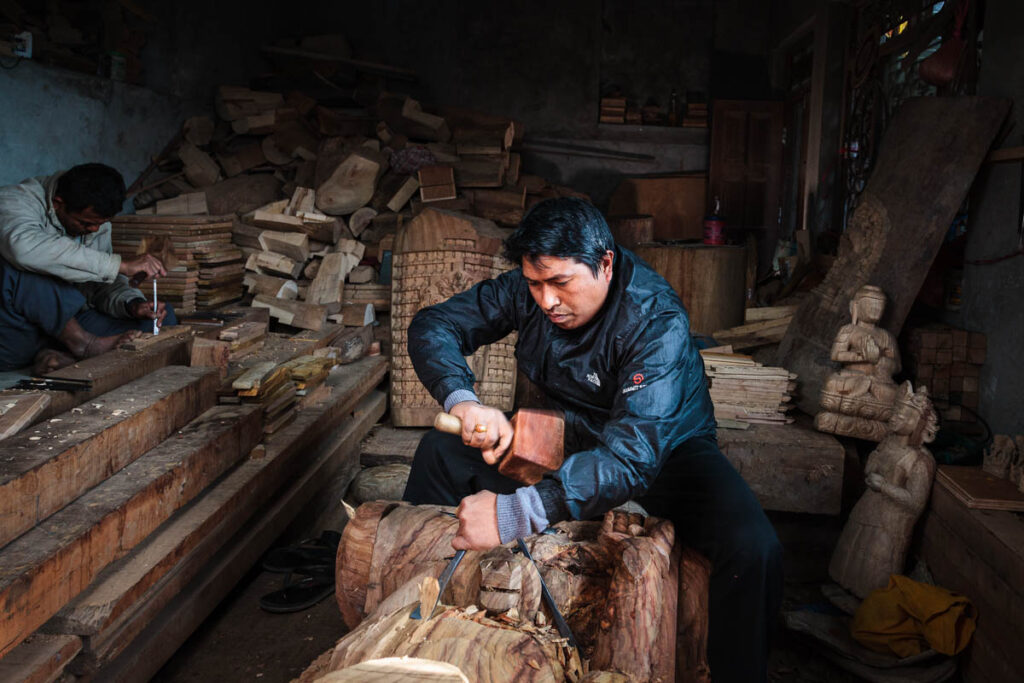 Ratna works on the basic form of a Buddha with mallet and chisel in his workshop in Bungamati, Lalitpur.

Gary Wornell is welcomed into the home of Ratnamani Bramhacharya, a Nepalese carver of immense skill and generosity.

Ratnamani Bramhacharya’s home and workshop are tucked away on a hillside in the village of Bungamati in Lalitpur on the southern side of Kathmandu. It’s December and the days are cool and bright. My friends Anmol, Shailaja and I met Ratna at his small shop in Patan and followed him over the busy ring road and out into the green countryside to Bungamati. This area is known for woodcarving—every household has some connection to the craft. Village shops line the streets and people are sitting out on steps in the sun, dogs wander lazily across the road and chickens scamper to safety as we pass. Here the air is clean and fresh and rice fields are dotted between the new concrete buildings and the older houses. 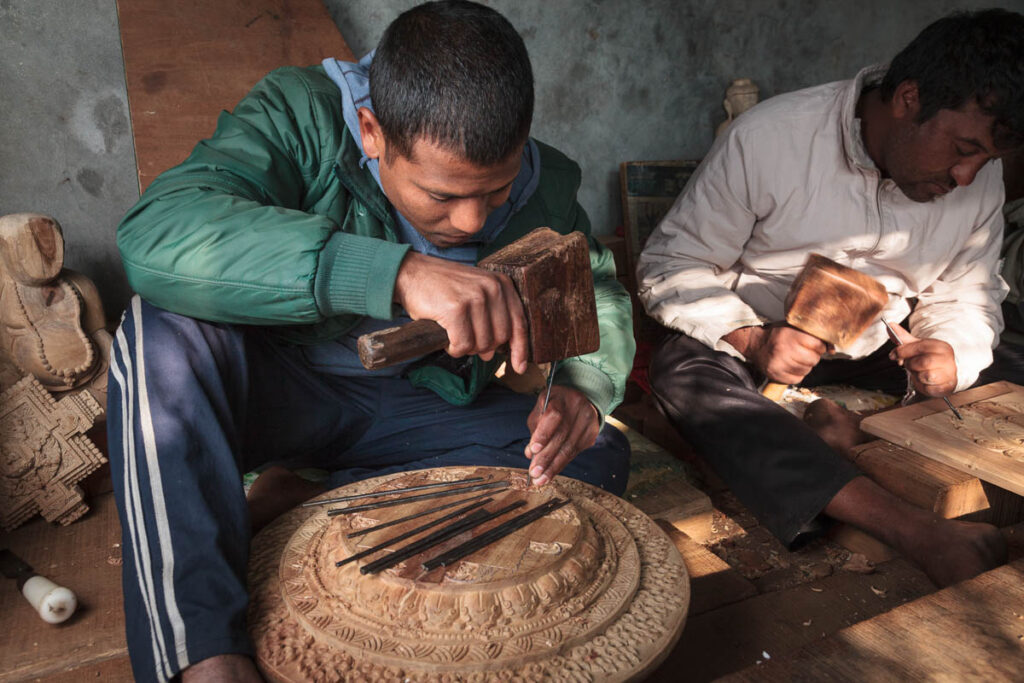 Craftsmen chip away at the details of small mandalas in Ratna’s workshop in Bungamati, Lalitpur. 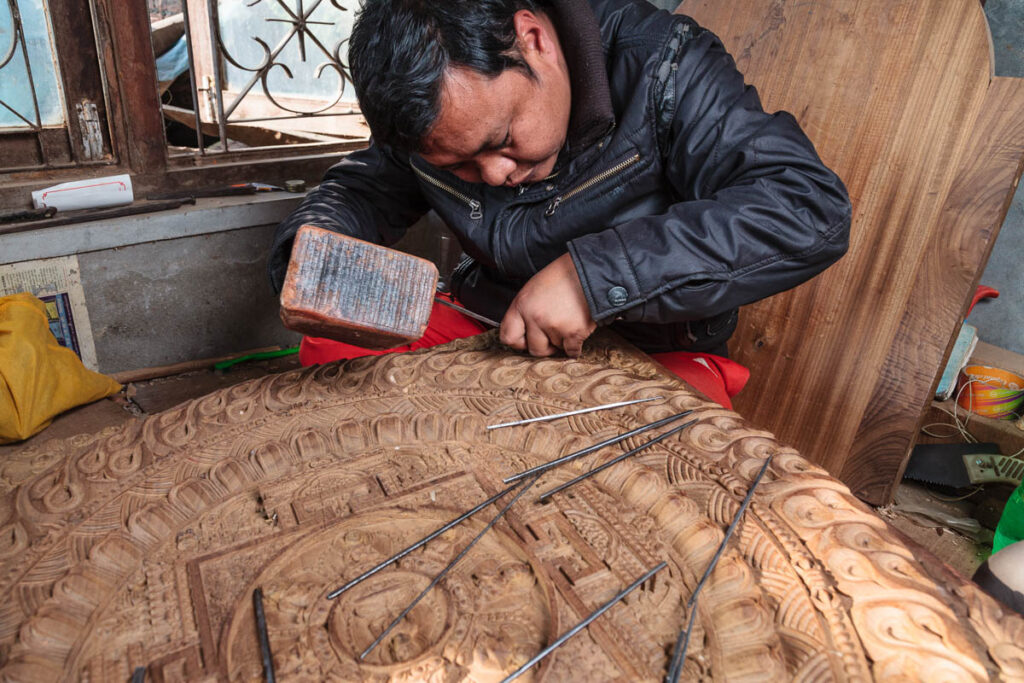 A craftsman works the corner of a large mandala. Ratna makes the steel tools himself with a wide variety of shapes. 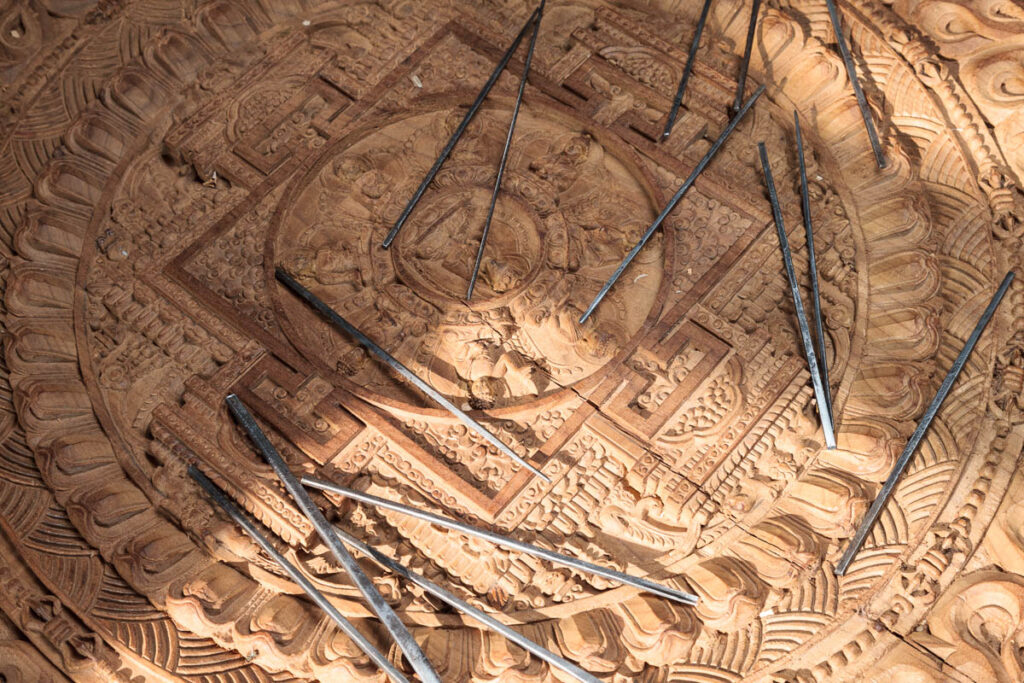 Dozens of steel tools of various shapes are used in the carving of details. Cracks in the wood will be filled before the object is finally painted.

Ratna has been working for over 30 years and has practised more than a dozen crafts. His family profession was tailoring and it was through them that he became interested in craft. His family came from Tilaurakot; a direct line of descent from his family to the Buddha’s. It was this family connection that inspired him to create religious works and by the time he was 12, Ratna had visited temples and watched the work of other craftsmen, spending the early days of his childhood listening to historians and people who told him the tales surrounding the old temple’s gods and goddesses. Gradually he moved to working with wood; here in Bungamati, everyone understands wood. It is only through the shared interest of the community that craftsmen can flourish. Even with all the work he and his team of carvers have, it is not easy to make a living.

We enter the property through the low wooden doorway of an old brick building, past a dark passage and out again into the bright sunlight to Ratna’s home and workshop—a fairly recent 5-story house built into the side of a hill. The house is built as separate rooms accessed by walkways and staircases open to the air and I couldn’t help wondering what it must be like moving around from one room to another on cold winter days when the wind is blowing. Nepali homes are not usually heated and it is common to wear down jackets both in and out of the house during the winter months. We are invited up to the second floor, passing stacks of drying wood, packed floor to ceiling, on the way. Shailaja and Anmol talk with Ratna in Nepalese. He doesn’t speak any English so without my two guides I would be helpless. Shailaja has been teaching me Nepali a few times a week and the sounds are becoming familiar to me – in fact, I’ve been able to read the signs on shops and notice boards with increasing success, but listening to their rapid conversation I’m completely lost. 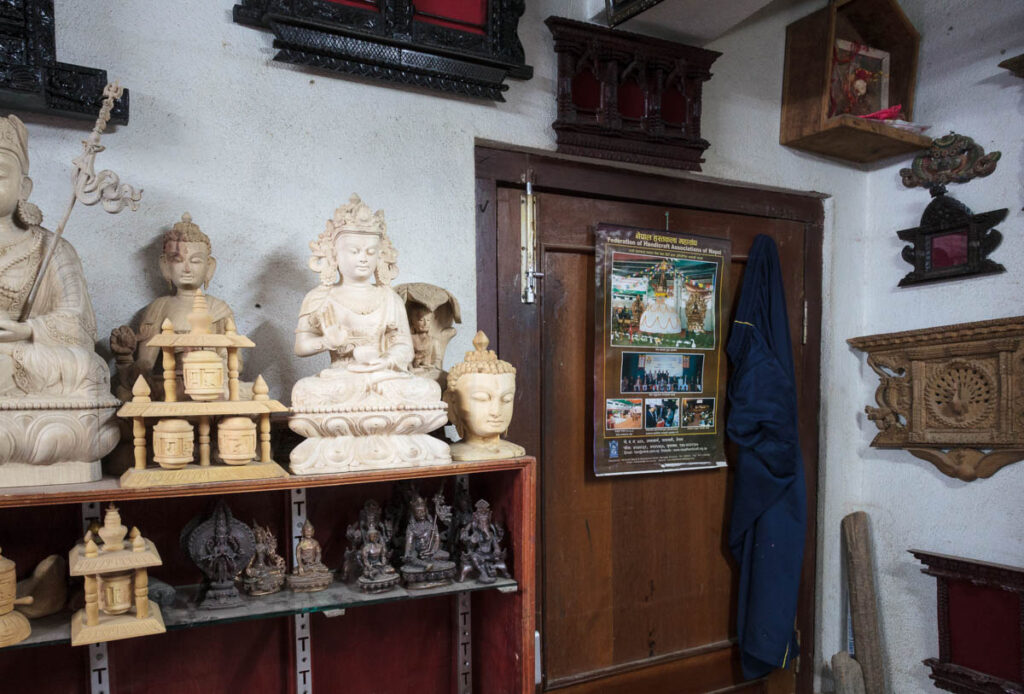 The room is unpainted concrete – somehow beautiful in its raw simplicity and is furnished with some of Ratna’s intricately carved tables, a sofa, some chairs, a cupboard and a bed. We sit talking for a while, Shailaja translating the conversation as Ratna tells me how he ended up as a wood carver, and what he loves about the craft. Inside the workshop, a broad shaft of sunlight streams through the dusty window. Two women sit cross-legged on straw mats by the door, and a row of men sit on a raised concrete platform chipping away at small wooden blocks. In the middle of the room, there is a large piece of Kapur Camphor. The wood for this 5-foot high god has been drying for the last eight years and as Ratna sits with his wooden mallet and steel chisel hammering away, the intoxicating aroma of camphor permeates the air. This sculpture will take him 5 months to complete.

Ratna’s time is divided between his shop in Patan and here in Bungamati where his family lives. In town he works with his wife inside the shop, greeting customers as they pass by, offering them tea and chatting while he chips away at small wooden blocks at his feet. This is where he connects with potential buyers for his art, but even with a constant flow of visitors, he keeps himself busy with mallet and chisel. In the relative peace and quiet of the village, he can work with his team without distractions. Each worker is huddled over their work. They seem to be deep in meditation. They sit huddled in their warm jackets, holding the wood steady with their feet, toes acting like vices, easily released and gripped again as the wood turns. A large mandala is being intricately carved. Half a dozen fine steel chisels lie on the surface and the carver alternates between them as he works. Only the soft rhythmic sound of the mallets breaks the silence. Ratna sits on a wooden stump, working directly into the wood, occasionally making a small drawing with a ballpoint pen defining the place for a hand; chips away until it takes shape. 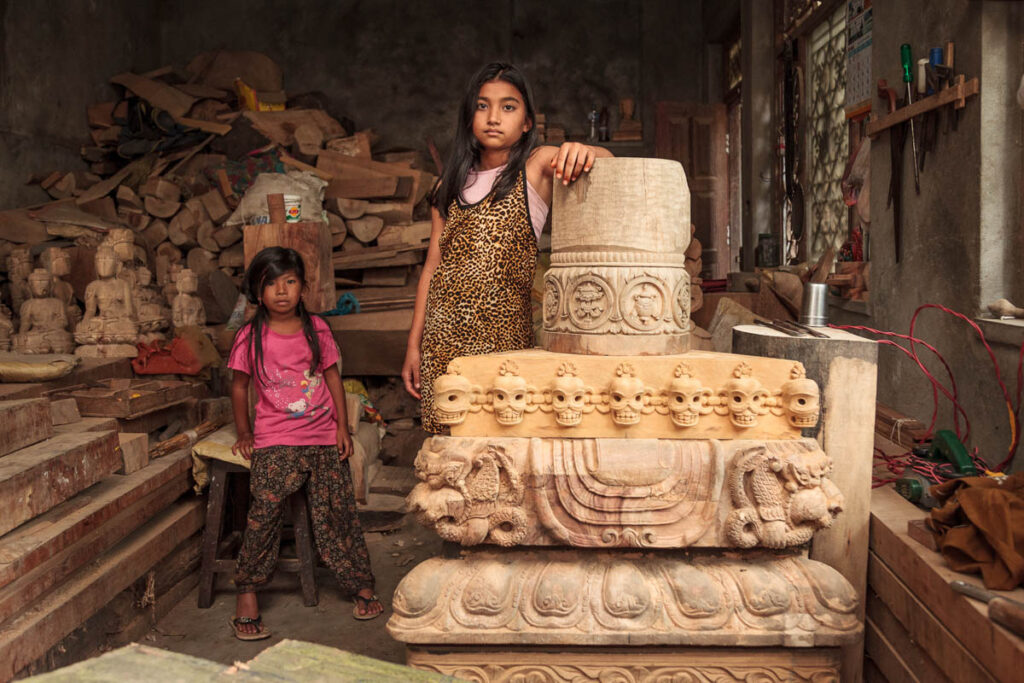 Ratna’s neices stand in the workshop beside a work on progress. 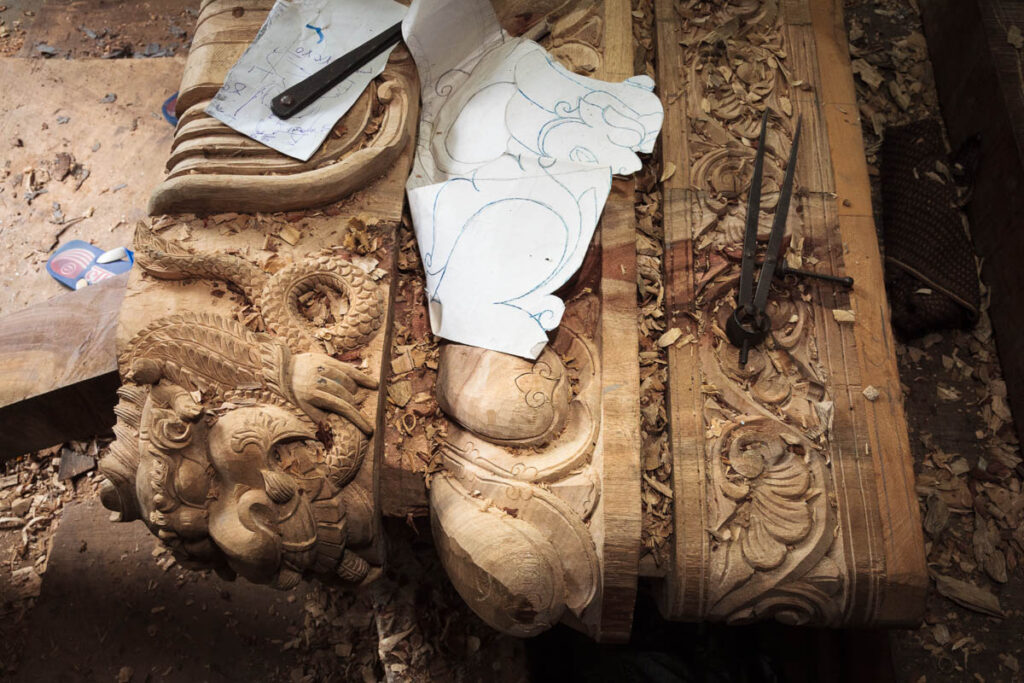 The detail of a larger sculpture in the early stages of carving. 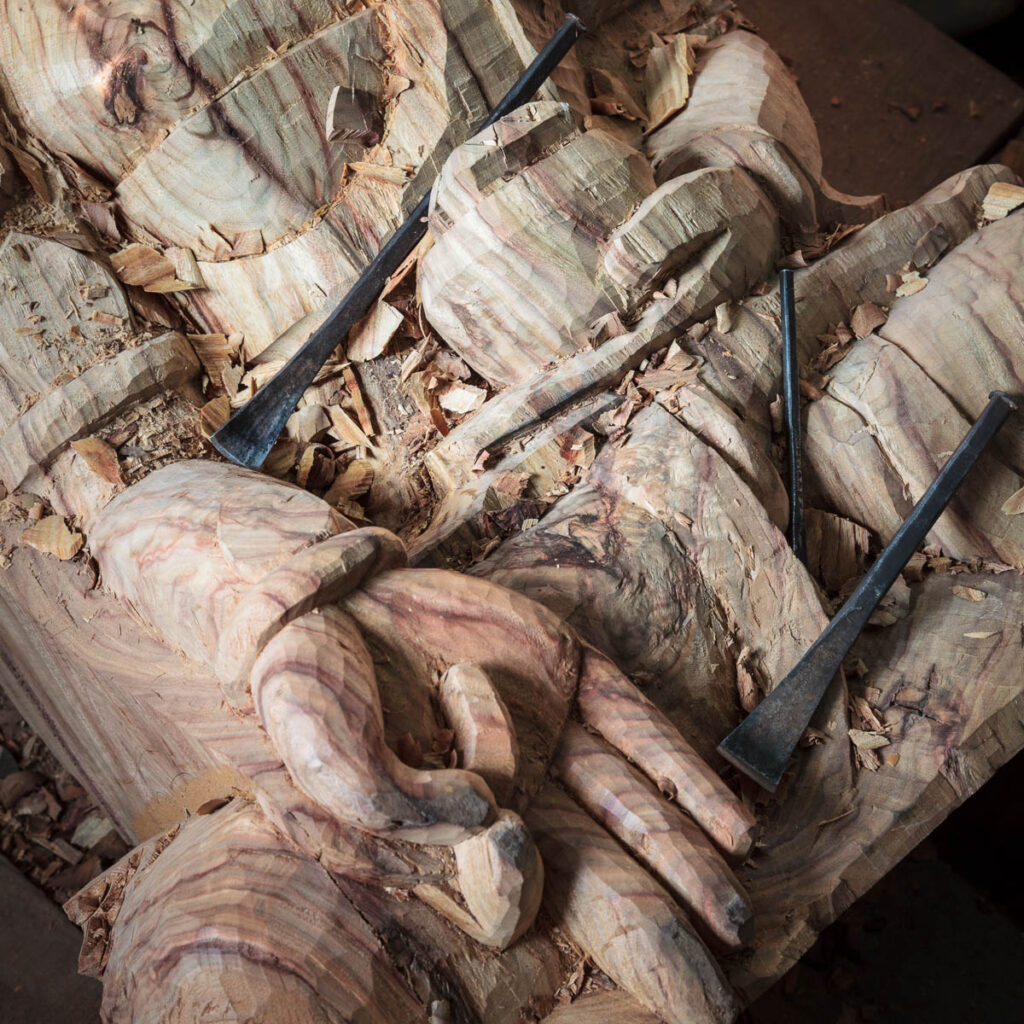 A large carving of a Buddha made from Kapur Camphor will take 5 months to complete. 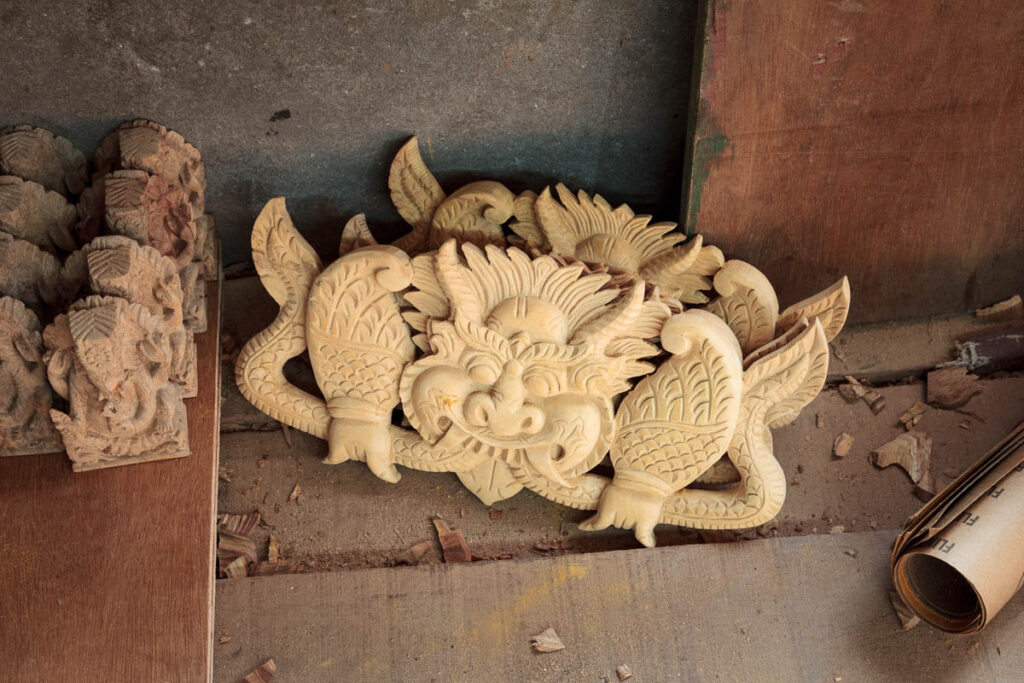 Carved objects in various states of completion sit on the floor of Ratna’s workshop in Bungamati, Lalitpur. 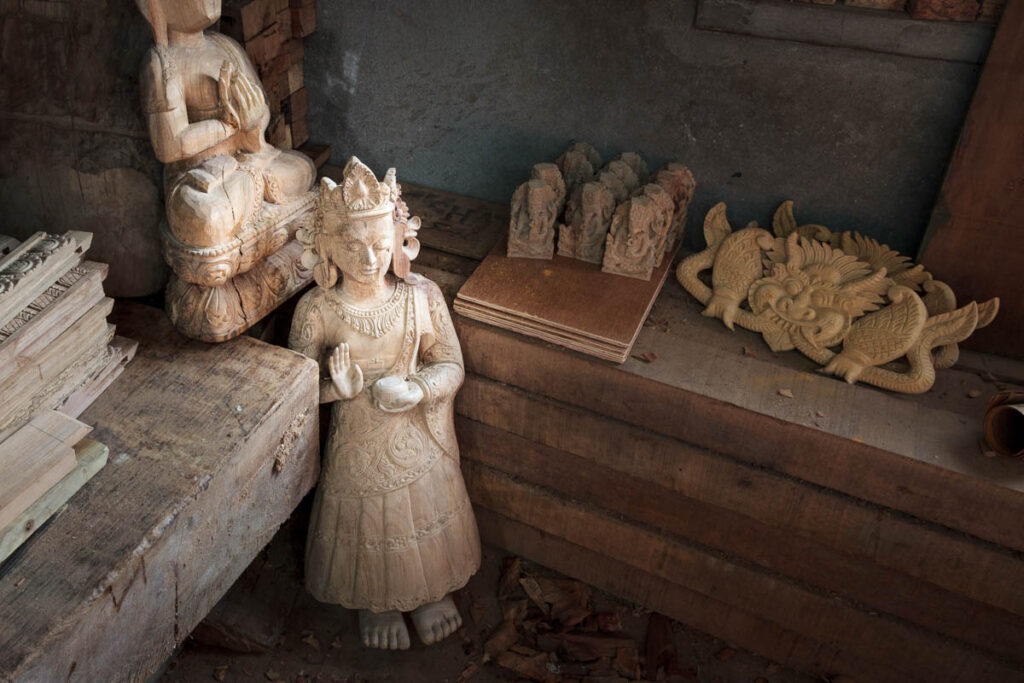 The workshop is piled at one end with Sesau wood, Chapa (pine) Raktachandan, Bijaysan, White Chandan, Agrath, Supari – all collected by Ratna and stored in various locations around the building. Ratna told me the history of the logs, where he had got them from and how long they had been drying. Half-finished sculptures line the room, perched on shelves, leaning lazily against the walls – their lotus leaf bases and posed bodies with hands in classic mudra positions waiting for their faces to be carved.

With no formal training available Ratna taught himself wood carving. He tells me it was tough at first, but now after 22 years as a wood carver, he has found his vocation. He worked alone during those early years and then started to teach others and soon they began to work for him. He tells me he has taught over 500 craftsmen and women. He has been inspired by the objects he has seen in temples and in pictures—sometimes creating sculptures just from old photographs. What he sees in two dimensions he immediately visualises in 3D. His knowledge of wood is extraordinary. He can visualise from the outside of a block just where any flaws might be on the inside and plans the cuts accordingly. There is a strong tradition of form, which he understands intimately; the scale and proportions of each element have been copied for generations, and still, his work is personal and recognizable as his own.

I visited Ratna many times while staying in Kathmandu. We had developed a form of communication that didn’t involve much in the way of language on either side but somehow was rich and rewarding talking through the work and my photographs and video.

After the earthquake of April 25 2015, he told me that many of the older buildings in town had collapsed. He and his family were safe and the new home and workshop were thankfully spared; built of reinforced concrete with sound foundations. But all around there is evidence of the devastation. Everyone in the valley lost friends and family. 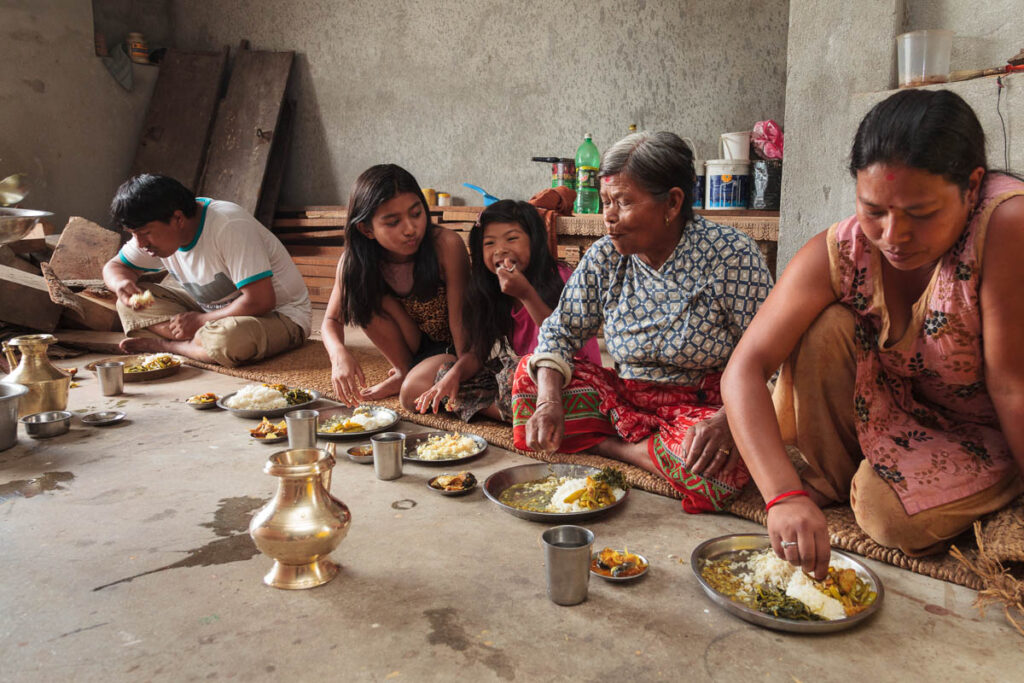 As with any visit to the homes of Nepali craftsmen, guests are expected to eat with the family. This has always been a tough one for me because I want to capture the intimacy of the moment with my camera and also relax into the warm hospitality. It is considered impolite not to accept food when it is offered and I do my best not to offend.

On one occasion, half a year after the quake, I arranged to meet him at his home to discuss the opportunity for him to visit Finland for a major exhibition I was having featuring, among other craftsmen and women, his works. While his wife prepared a meal I went through all the documentation he needed to apply for a visa. His application was denied and I was somewhat puzzled after all the work we had put in together with letters of invitation from the museum, his homestay and my own letter explaining the importance of this cultural exercise. Later I found out from the Embassy that when he was asked who he was going to be staying within Finland he had simply said ‘Gary’. ‘Gary who?’ asked the official. ‘Gary from Finland’ he replied, which was just about the limit of his English at that point. 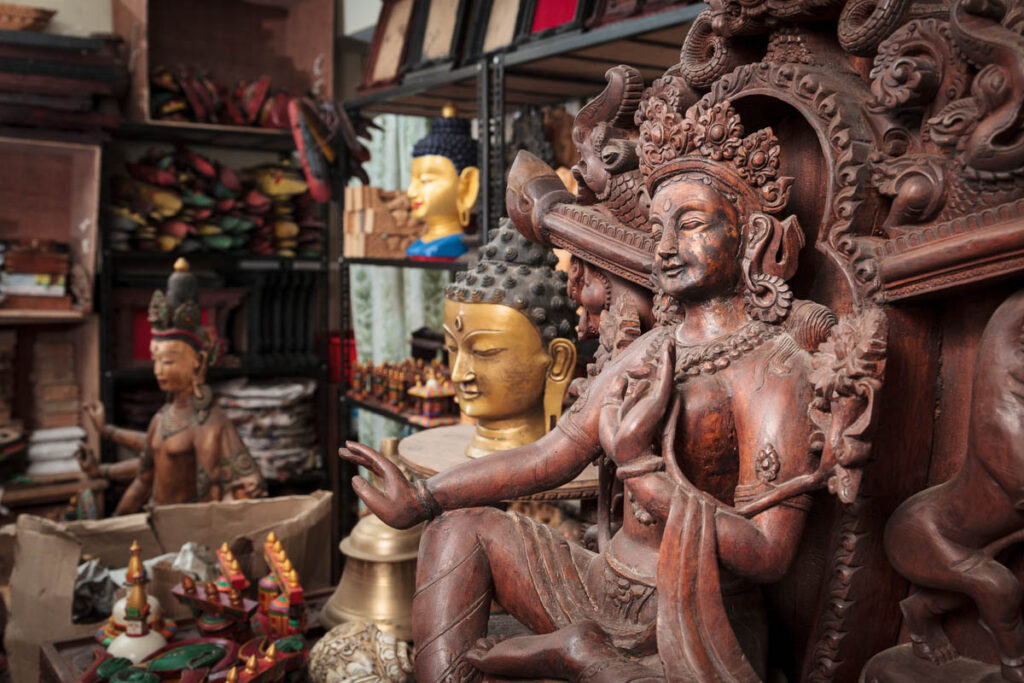 Ratna’s storeroom in Patan has hundreds of elaborately carved gods and goddesses as well as secular works.

Ratna’s small shop in Patan bears the sign—Ratna Wood Carving Centre—over the window with the telephone number of the showroom and factory. The place is full to the brim and it’s hard to move around without knocking something over; wooden shelves are packed with painted and unpainted sculptures, colourful gods in rows, and window ornamentations. I was here the day before the earthquake struck, shooting video of Ratna as he sat on the floor, carving and chatting to visitors, while his wife made tea and painted the sculptures in another corner. His son was there too, just back from a trip to China where he regularly promotes his father’s work and takes orders. Many of his sculptures are destined for export these days to Europe and North America as well as China and Japan. He has enough work for years to come.

On that late April morning in 2015, I watched as Ratna took a rectangular block of wood in his hands and turned it over a few times, made simple marks on the surface, chipped away for a while, turned the piece on its side and gripped it with his feet. As the hours passed, the form of a Buddha took shape, first the body, then the arms and hands and finally the face. Visitors came and went during the afternoon, a relaxing day of listening to his stories and watching him work. No one that day was aware of the forces building up in the earth’s crust tens of kilometres below where we sat. Ratna continued carving and chatting; watermelon was cut and passed around, and the sun slowly began to set to the sounds of traffic outside and that very familiar barking of Kathmandu’s street dogs. 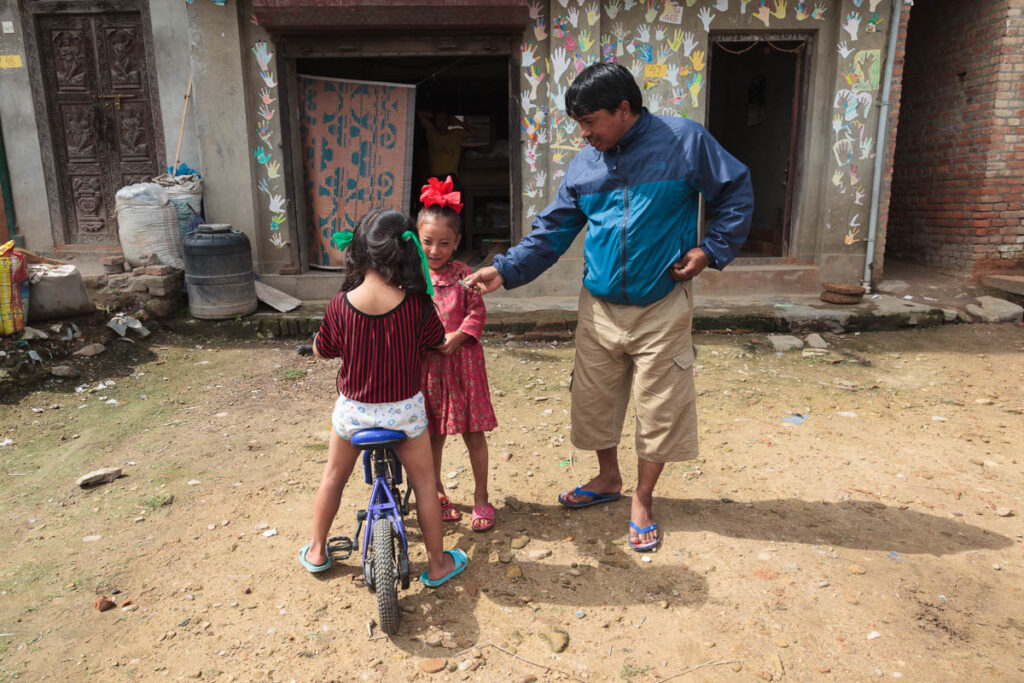 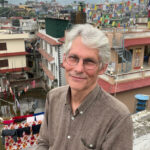 Gary Wornell ✿ A witness to the beauty of making, from Finland to Nepal
Gary Wornell is a regular contributor to Garland. His stories of craft in Nepal are beautifully rendered in words and images.

Silk thangka: An unbroken thread
Deborah Kelly: Cutting with the past to create a new order
Subtle cuts: New word sculptures from Ally McKay
Ran Out
Preliminary notes on relationships between Chinese Ge Ba textiles and the walls ...
Fresco comes to the mountain
Walking, thinking, making: A weaver in the world
How deities are born: Bronze casting in Nepal