Chilean horsehair jewellery across the Pacific 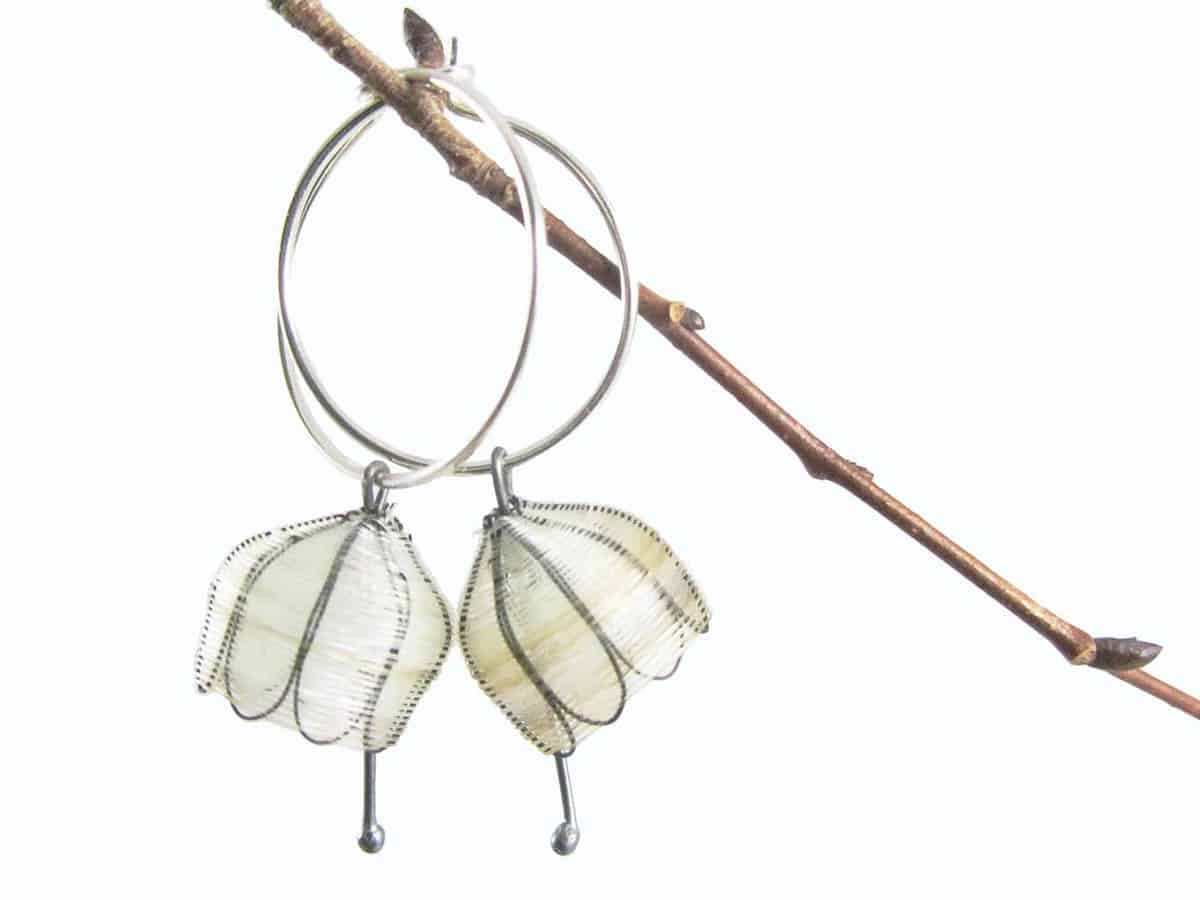 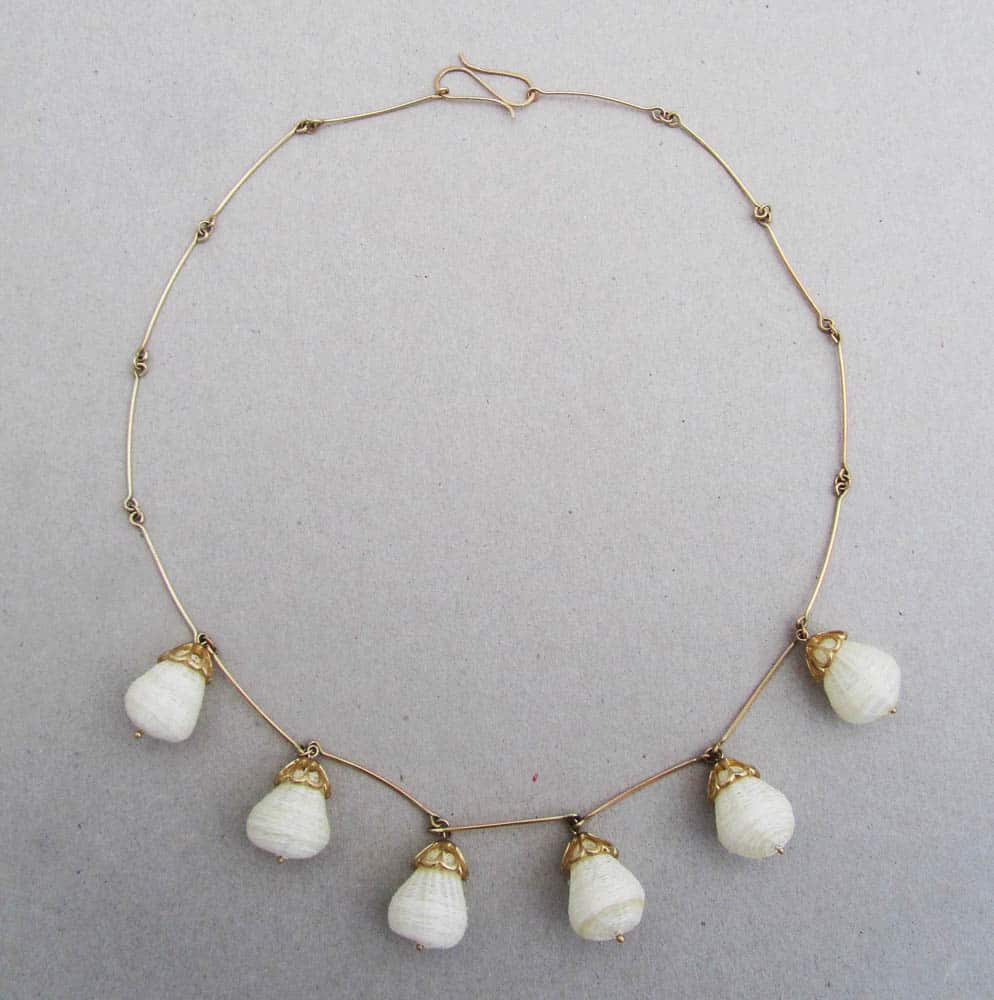 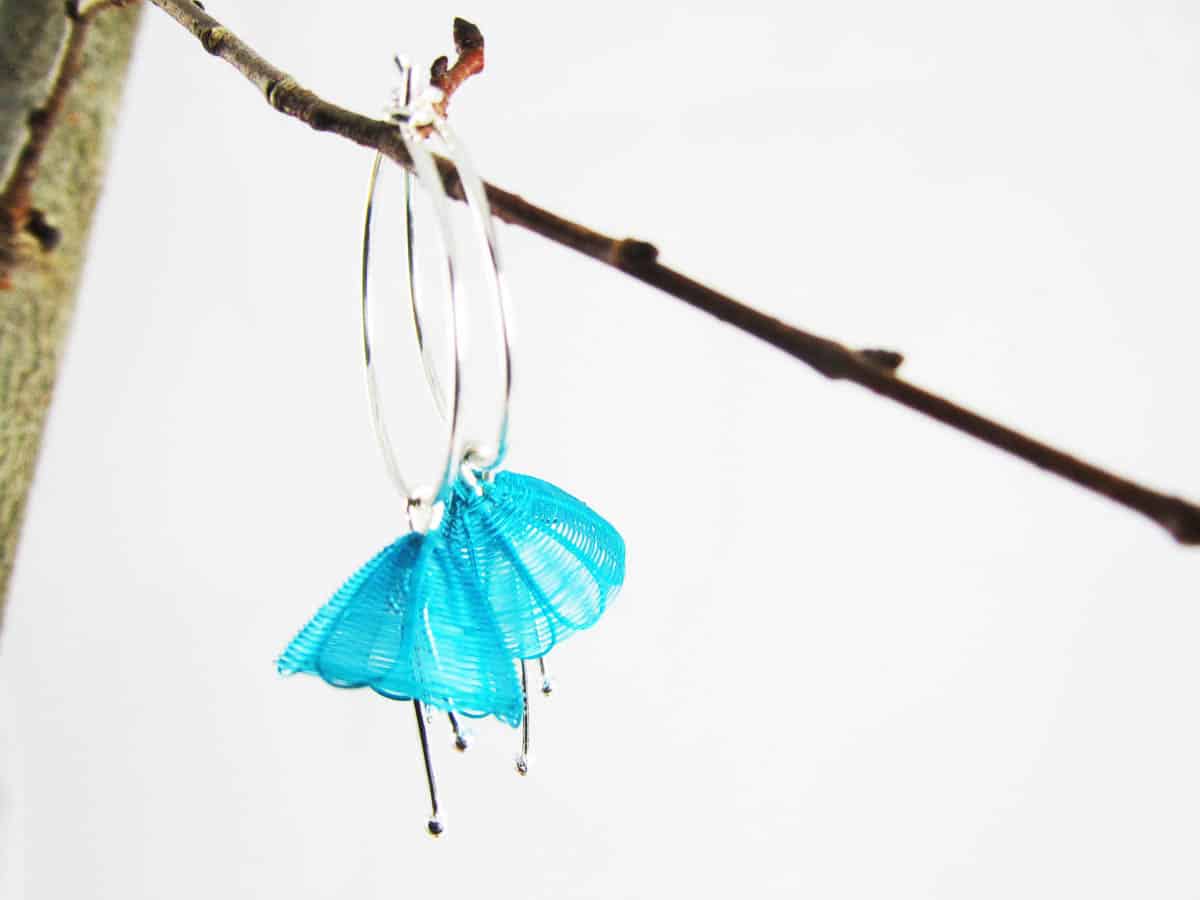 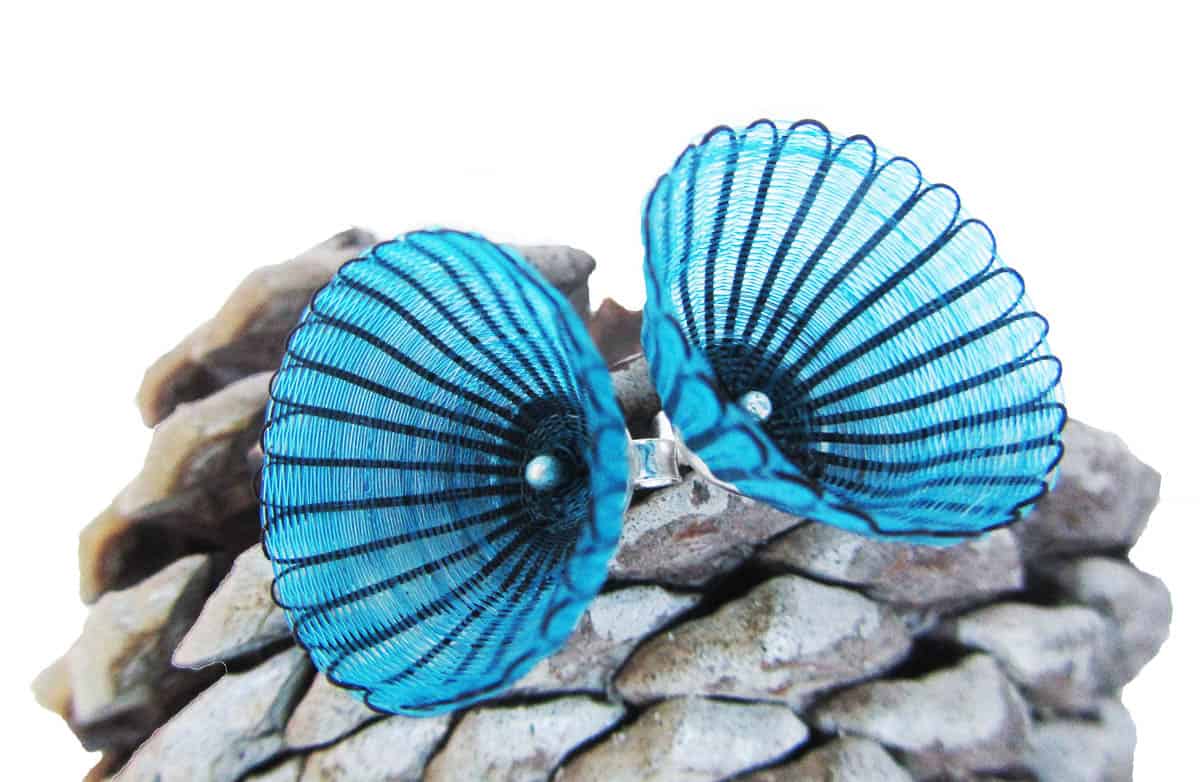 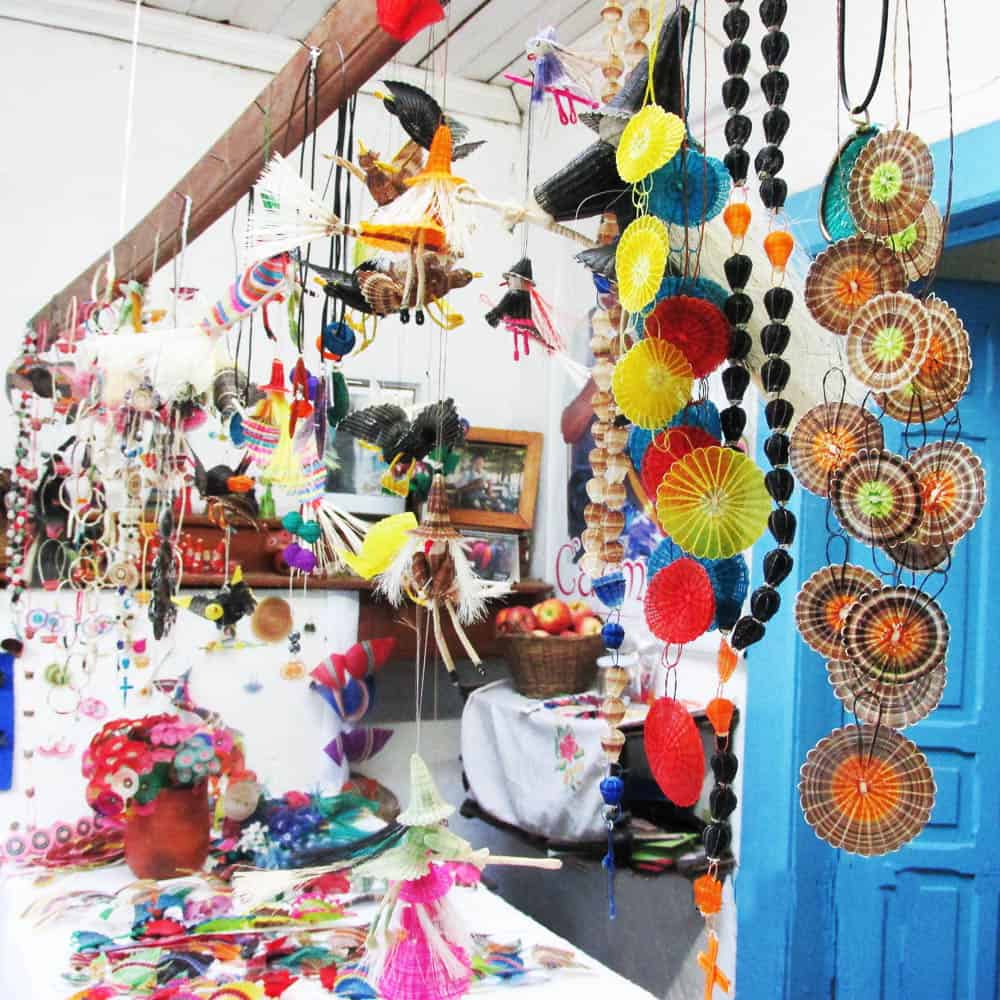 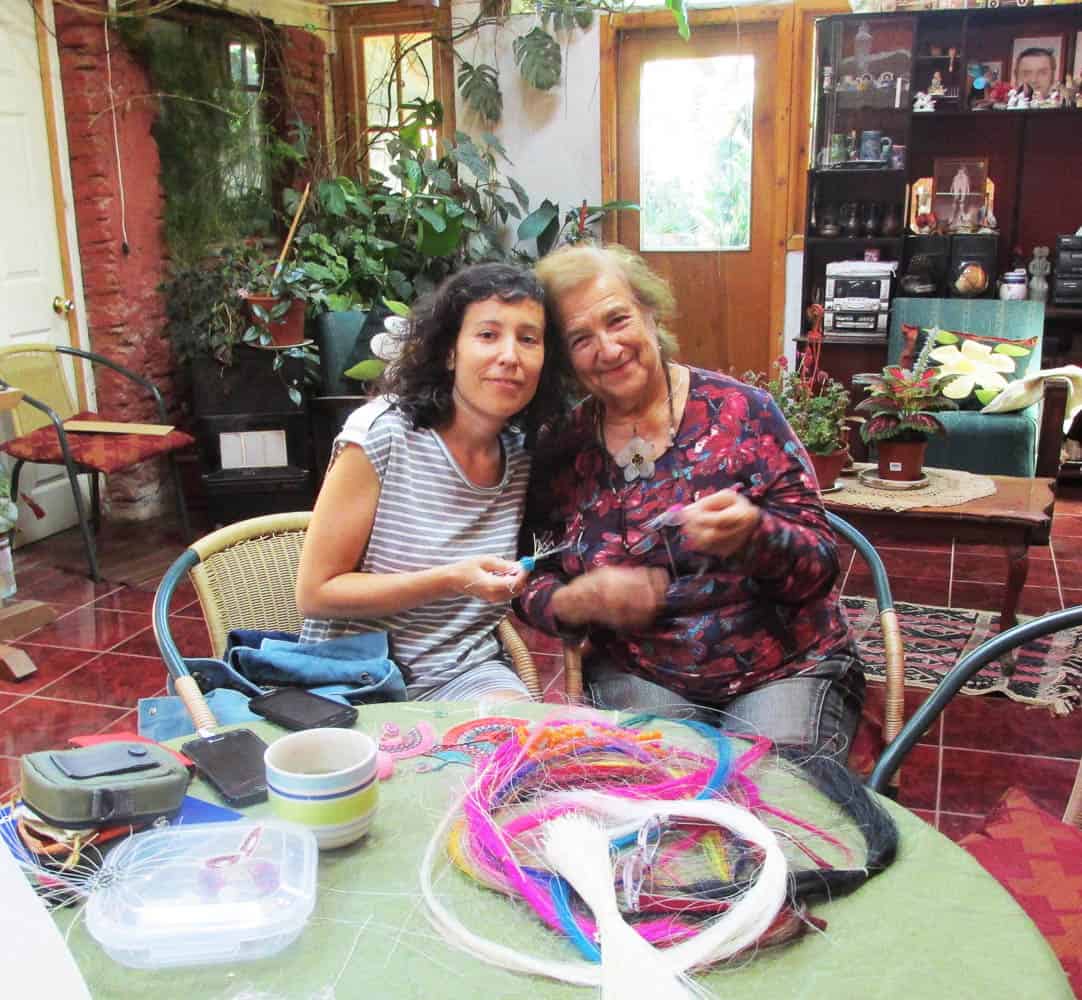 Crin (horsehair) jewellery is idiomatic to Chilean culture. Trinidad Estay has taken this technique to the other side of the Pacific where it develops a close relationship to its equine origins.

What is your practice as an artist?

I initiated my artistic practice as a sculptor in Chile working with various metal techniques and creating works inspired by natural shapes that I turned into organic volumes. Through my work I explored the concepts of armour/skin in relation to human behavior and I made large scale metal pieces that visually represented my views. When moving to Australia I rediscovered my creative practice through Chilean crin weaving (which connects to my cultural background) fused with my observations of Australia’s native flora, discovering unique forms, textures and colours. I learnt the weaving technique and started to create miniature pieces that imitated the shapes of seeds, gumnuts, flowers, etc., that I collected and documented. Later on, those pieces evolved into the design of wearable objects and directed me into the world of jewellery making. In my work I try to create a dialogue between the woven and metal pieces so they complement harmonically. Through the crin practice I also got into the world of horses getting a better understanding of the relationship between humans and these creatures.

How did you come to be interested in working with crin?

I have always been passionate about crin. When living in Chile, I collected craft and jewellery pieces and I always thought I would like to learn the technique. I admire the intricacy of the weaving, the delicacy of the horse hair and how master crin artisans utilise it to make the most beautiful designs inspired in the Chilean native flora, fauna, religious and cultural imagery. As a sculptor I was particularly attracted by the characteristics of the technique that allows the construction of volumetric forms and by the natural texture of the weaving which adds a rich visual and tactile perception to crin objects.  It also interested me the qualities of the horse hair as a weaving material, its strength, flexibility, lustre and semi-transparency that enables the creation of an internal and external aesthetic. Lastly, I’m interested in the narrative that accompanies the crin craft: how it was originated in a small village in the countryside, the social and economic impact in the local community and its connection with the world of horses and nature.

Can you say how the horse hair is collected? 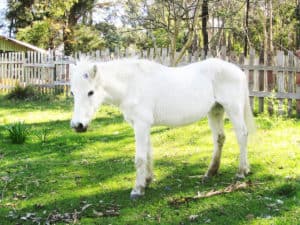 I have been sourcing Australian horse hair in different ways. My husband‘s father’s family live in Nagambie and they have horses. I got in touch with them to tell them what I’m doing with crin and they offer to give me some horse hair. That was the first hair I used to practice the weaving and experiment with the dyeing technique. Later on my friend Carolina Snow got interested in my work with crin and told me that her daughter Ayelen had a horse in Wonga Park (Croydon) and that she might be able to give me some hair. Carolina spoke with her daughter and she agreed to meet me and suggested to meet the horse and cut the hair together. I went to Wonga Park and met Carolina, Ayelen and her horse Jindy, a 22 year old white pony. It was a great experience for me to meet Jindy and her owner because I was able to see the strong connection between them and hear the story of how Ayelen got the horse and the significance of having Jindy in her life. It was a special moment we shared and I decided to acknowledge them by including their story in the narrative and promotion of my work. Through Carolina I got in touch with her friend Carolyn Weeks who also has horses and she gave me horse hair. I asked her to meet each other and the horse but she told me it died a few years ago and that they kept the hair in remembrance of the animal. She wrote me a long email telling me about the story of the horse which name was Sky, an Australian white pony that used to live in the Acheron Cutting in Acheron, a farming community in north Eastern Victoria (between Maroondah Hwy and the Goulburn River). Carolyn’s mother use to have a stud farm called Daalko Australian Pony Stud and Sky was her favourite horse. Carolyn still remembers Sky and beautiful moments they shared in her family property in the Victorian countryside.

How did you find someone to teach you? 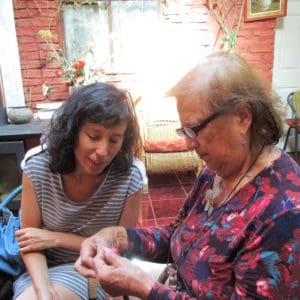 When I decided to learn crin I told my mother Eugenia in Chile and she said that her local Council was offering crin classes and that she was also interested in learning and enrolled in the course. She thought as well that by doing the crin course she will be able to transfer me knowledge and help me to develop my weaving skills.  The crin teacher was Hilda Diaz, an experience artisan who is based in Santiago, but originally from Panimavida (closest town to Rari village where the crin technique was originated).  My mother built up a close relationship with Hilda and told her that I was trying to learn crin in Australia and she got really interested on what I was trying to achieve. Through Skype conversations, my mother explained to me the basics of crin and also recorded videos of Hilda discussing the weaving process to construct specific shapes. When I went to Chile in February 2016 to visit my family, I decided I would do some research about the crin and that I wanted to go to Rari and have crin classes with Hilda. My mother and I travelled to Panimavida and got in touch with Hilda’s mother Amanda Salas, who lives in the town and that has been doing crin craft all her life. We stay in Panimavida for two days and spent most of the time at Amanda’s home learning crin techniques and talking about the craft and its connection with her life story. We share a special moment with Amanda and her husband and I learnt important things about crin and its significance in the lives of many women in the local community. Back in Santiago I met Hilda and she taught me other weaving techniques. She spoke about her work and the recognition she has gained in the craft sector through her innovative crin designs. Hilda works as a full time crin artisan and collaborates with Chilean artists and designers developing jewellery, accessories and other object designs. I was impressed by Hilda’s weaving skills and I hope I can develop a creative collaboration with her in the near future.

Do you hope to add something new to the art of crin? If so, what would that be?

Yes, I do. I can see the potential of using crin to create new work and take the technique to another label of creativity and practice and use my artistic knowledge and skills to innovate the traditional crin design work. On the other hand, I think that because I’m using crin out of the Chilean context, I can add a different perspective into the art form. In Chile, artisans and artists are inspired by their surrounding environment, native flora and fauna, religious and cultural imagery. Here in Australia, I’m in a new environment that offers me a new source of inspiration and opens a world of fresh ideas/aesthetics. This particular point is really important and I think it marks the difference between my crin work and the one that is made in Chile.  When I decided to learn crin, I knew that I will have to put things into the Australian context to attract interest. I knew this venture would bring the effects and challenges into my creative practice. To develop my weaving skills I had to source horsehair in Australia and explain the technique to people who sometimes look impressed or suspicious because they never heard about crin before. I can see that two worlds, two cultures converge in my work: the Chilean tradition through the crin weaving technique and Australia through its nature and environment that inspire my designs. Lately, I think I’m adding a new narrative to crin by incorporating the stories of the horses and their owners into the conceptual framework of my work.

What is the impact of crin on horses? Does their hair grow back?

Crin doesn’t have any major impact on physical integrity of horses. The well-being of the animals is my unconditional priority and they donate their hair calmly and with no fuss. The jewellery I make is usually small size so I don’t need much hair to weave and the hair  (that comes from horse tail) is usually quite long and allows me to weave quite a large part of the piece. The hair does grow back, but it might take a while to get to the same length. 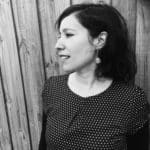 Trinidad Estay is a Chilean jewellery designer based in Melbourne. She crafts her jewellery using Crin, a traditional technique of miniature basketry weaving with horse hair from Chile. To know more about her upcoming projects, do visit https://www.facebook.com/trinidadestayjewellery/

Proyecto "Las Fábricas”
A pomegranate’s secret: The jewels of Mehrnoosh Ganji
Making wood precious in Astana, Kazakhstan
Casting shadows: Areta Wilkinson and Mark Adams at the National
When the land becomes a jewel
How an island makes its makers: The artisans of Gabriola
With nature
Tying down art in my own public Idaho