Ismael Rodríguez describes a project inspired by a sixteenth-century manuscript to reproduce a Nahuatl textile and appreciate the mistakes along the way.

“Chroma” means quality or intensity of color (in Nahuatl “tlapalli”). It comes from the Latinized form of khroma / χρῶμα which refers to skin color. Chroma is derived from the dialectical relationship between text and textile, an experiment based on the documentation that Franciscan Friar Bernardino de Sahagun. This record was made 1540-1585 in the “General history of the things of New Spain”, which was reproduced in the publication of “Folk Arts in Mexico”, written by Dr Atl in 1921-22. A hundred years later, a code that reproduces the serape aesthetic, an ancient cloak traditionally woven by loom, generates eleven acrylic wool screens, as a dialogue between two supposed antagonistic production technologies. 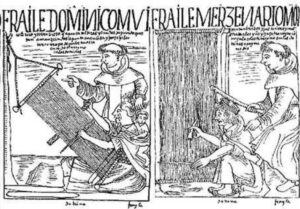 As retrieved by Isabel Marín de Paalen in her book from 1976 Ethno crafts and folk art, “serape” comes from the Nahuatl word tzalanpepechtli, composed by tzalan (interwoven) and pepechtli (blanket). It is Hispanicized in the following way: Tzalanpepechtli > Tzalanpechtli > Tzalapech > Tzalape > Zarape > Sarape (the “s” was determined by the Royal Academy)

Probably, this is a hybrid textile derived from an indigenous and Spanish weave, like the ones from Andalucía, Jerez or Zamora. On the other side, the proper name of the native blanket was tilmatli. It was squared with patterns or borders, and considerably lighter than the serape.

Here, art relates to the concept of design with a double meaning. The project transfers the practice of “tracing or drawing” to a language interpreted by procedural code, calling into question the virtuosity of the agent who projects. Judgment involves error, or “glitch”, causing the corruption of an image. In a second reading, it is the mutual correspondence between mechanisms, one virtual, the other analogical, as mediated by a prosthetic body, which constitutes the resulting canvas.

The power of an image goes through different stages of configuration, from political use and commercial exploitation to the sensitive treatment that originates it. If the social body in Latin America was disciplined due to a colonial matrix, it was through disobedience that it found an escape vector in the artifice.

Historically, textiles are part of the friction between tradition and modernity, bearing witness to the technical mastery in the development of civilizations and to the subsequent industrialization of looms. From the ethnographic records contained in the Florentine Codex to the human-machine synthesis product of the nineteenth-century revolution, there is constant feedback over time.

“There is a margin, a dimension of the possible, of the non-mechanized action of the code. The transfer of the process that becomes humanity. It is in error, where the human still underlies and unfolds, where the hand shows its gesture and the artificial, its limitation.”

A total of 11 canvases of 2.35 x 2.35 m. are exhibited as part of Image may contain at Espacio Museum in Aguascalientes, Mexico. This project was made with the support of State Institutions of Culture AIEC 2020, through the HORIZONS platform of the Jalisco’s Ministry of Culture. It was coordinated by art producer Barbara Muñoz de Cote and the Pedro Romo’s Workshop, in collaboration with masters Gloria Melendez and Juan Manuel Garcia, in Arandas, Jalisco, and Atelier Naela Flores in Guadalajara, Jalisco.

“What is done by hand combines technique, play and failure. To recover the scar of the craft, to verify its materiality to face all possibilities, to the infinity of combinations, to the still prevailing capacity to interpret what is not explicit and that is revealed to us on surfaces. A process in which the machine, as an artificial component, is integrated with human craft and its nature of improvisation. An image is captured and coded by software, synthesized in acrylic yarns that are recomposed in a text through the loom.” 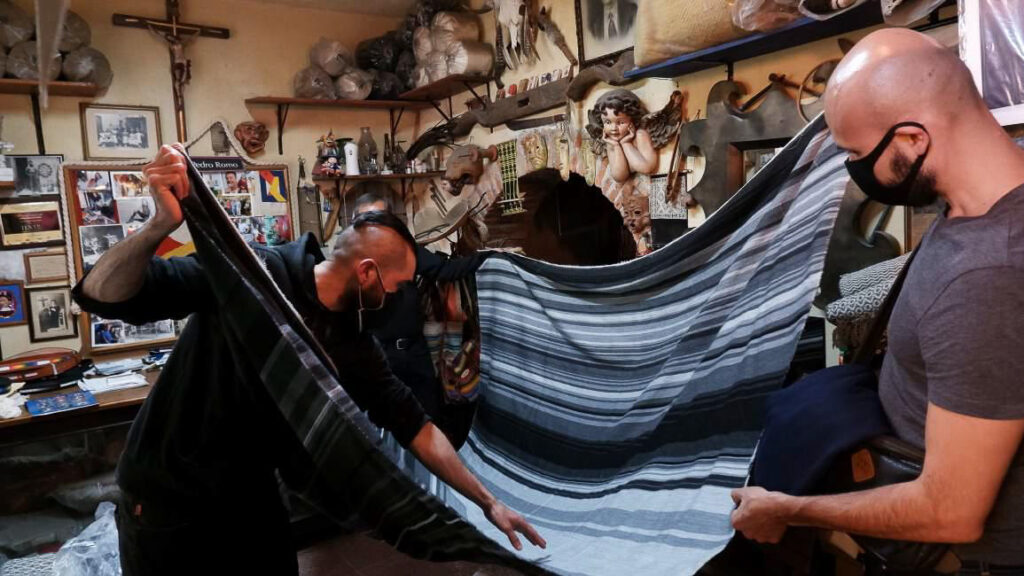 The weaving was made entirely by the couple of Juan Manuel García and Gloria Meléndez, at their home workshop in Arandas, Jalisco. Juan Manuel is a local provider of handcraft blankets and Gloria used to make table linen. In fact, they have a partnership in Guadalajara with the master’s Pedro Romo workshop, which is a close friend of mine. In the beginning, it was my intention to produce Chroma with him, but due to the needs of the project he offered instead to travel with me to Arandas, so I could present it myself, since it seemed the easiest way to start the collaboration with Juan Manuel and Gloria.

Due to pandemic restrictions, the production was made entirely remote and all the communication was mediated through phone calls and WhatsApp messages. This was requested by Juan Manuel and Gloria since they were considered part of the population vulnerable to COVID-19. Time and schedule, as well the terms of the collaboration were suggested by master Pedro Romo in accordance with standards of fair pay and treatment. There was only one visit to Arandas. It had the purpose of interchanging opinions on the project and providing all the tools and materials needed. NEOCRXFT does not pursue any monetary profit from this project.

As an anecdote, I printed all the patterns in real scale for that first and only trip, given that due to health contingency, we would not get allowed to come again in person. What I really never expected was that Juan Manuel does not use graphic references or a visual color palette. He uses a personal system of conversion, or a “gloss” as he called it. For that case, every strip was calculated at a rate of 14 “fights” (luchas in Spanish) for each centimeter. A fight is the way weavers name the back and forth of the shuttle, and the composition is not called “design”, but “labor” instead.

Once I got them, the color code was added to the instructions from bottom to top, following the logic of the making. In order to be more efficient, Juan Manuel suggested that Gloria could make a sort of spoken word of the conversions at the time she passed him each one of the color bobbins. 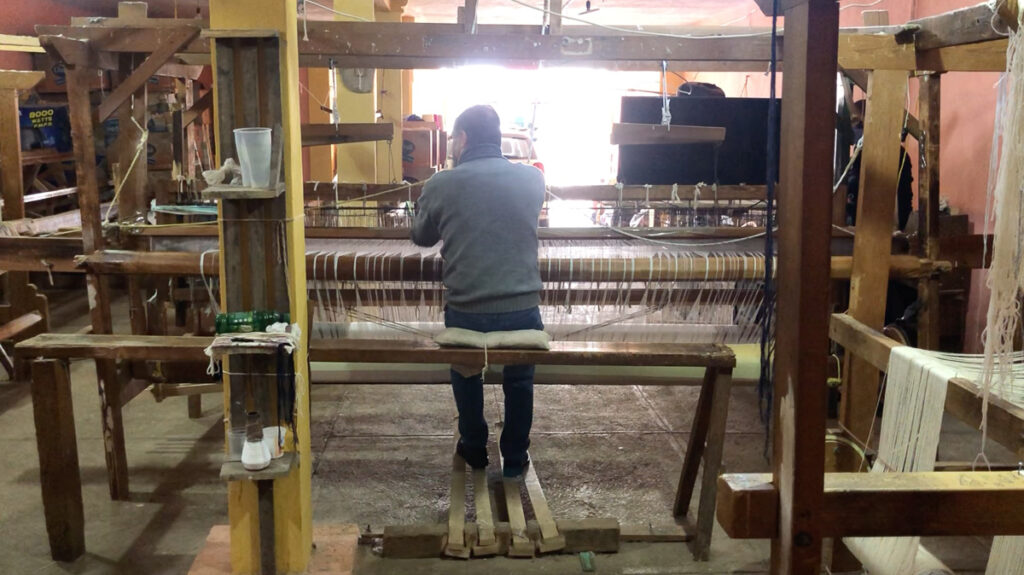 As the workshop lacked a proper comb for wider textiles, Pedro requested a new one in an old factory from Puebla, along with a couple of tools to stabilize the weave during the making and a general check-up of the loom to start a prototype phase. Again, based on a rate of square meters and kilograms of yarn, I made the calculations of cones we would need. It took about three weeks from none to all: one for adjustments, repairs and pilots, one and a half for production, and a couple of days to consolidate the package to Guadalajara. Once it arrived, Pedro made the formal delivery as representative. Next stop was at the atelier Naela Flores for seams and hems.

For scope of interpretation, if I understand correctly, was that on one side the idea of the image passed from being a premise to became a distillation of texts. Or as Magritte quoted in his essay “the best way to represent a word is with an image”, and vice versa. What I also want to emphasise is the creative capacity of abstraction through different codes, from text to textile, script to craft, word to image to word to image (twice), as a transfer of meanings.

The range of precision in colors was dismissed because we knew it was just a manifestation of light and perception (in this case, also mispronunciation or dyslexia) as a way to assimilate a symbolic margin of error, human error. Without forgetting that the image that started everything came from a hundred years old black and white book, whose content reveals the portion of a textile later processed by code. It generates a new image that is converted into analog instructions to produce a textile again, after a century, that consequently will become an image, as a loop.

Chroma collection was finished by January 2021 and it took approximately three weeks to be completed, including one week for technical adaptation of the loom and prototyping tests. Images rendered by processing were translated to a format of “literal gloss” by request of Juan Manuel, so the composition result is more akin to revealing a picture in photography in which it “appears”. But instead of light, it was a text recited by Gloria in real-time. Meanwhile, Juan Manuel was executing the “command” of his wife (chroma – 00 examples attached). Once finished, all textiles were sent from Arandas to Guadalajara by courier at Pedro Romo’s workshop.

Below, the Processing code: 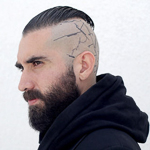 Ismael Rodríguez is a trans-disciplinary artist, trained in Architecture and Performance, cofounder of MERMA press and the Design Center of the extinct Craft Institute of Jalisco. Invited professor at the Central University of Ecuador, the Metropolitan Institute of Design and the Visual Arts Faculty of the National University of Brasilia, he is currently a member of the School of Architecture, Art and Design of the Monterrey Institute of Technology where he teaches History, Theory, Philosophy, Craft and Design. As a creator, he has done art residencies and exhibitions in China, Guatemala, Ecuador and Brazil. Co-founder of the No Design/Design collective, recipient of the International Communication and Cultural Contribution Award of the 2018 Beijing Design Week, he is currently exhibiting his first solo show in Mexico, produced by Architecture of the Invisible at Espacio Museum, titled Image may contain. NEOCRXFT is a nomad laboratory whose major objective is to analyze social phenomena, ways of living and thinking to generate conceptual proposals from craft; by developing application models and pedagogies through profiles, as well as formal languages, it drafts experimental structures for contemporary and folk art. Follow @neocrxft, like NEOCRXFT and visit neocrxft.cargo.site.