I wear letters from the past 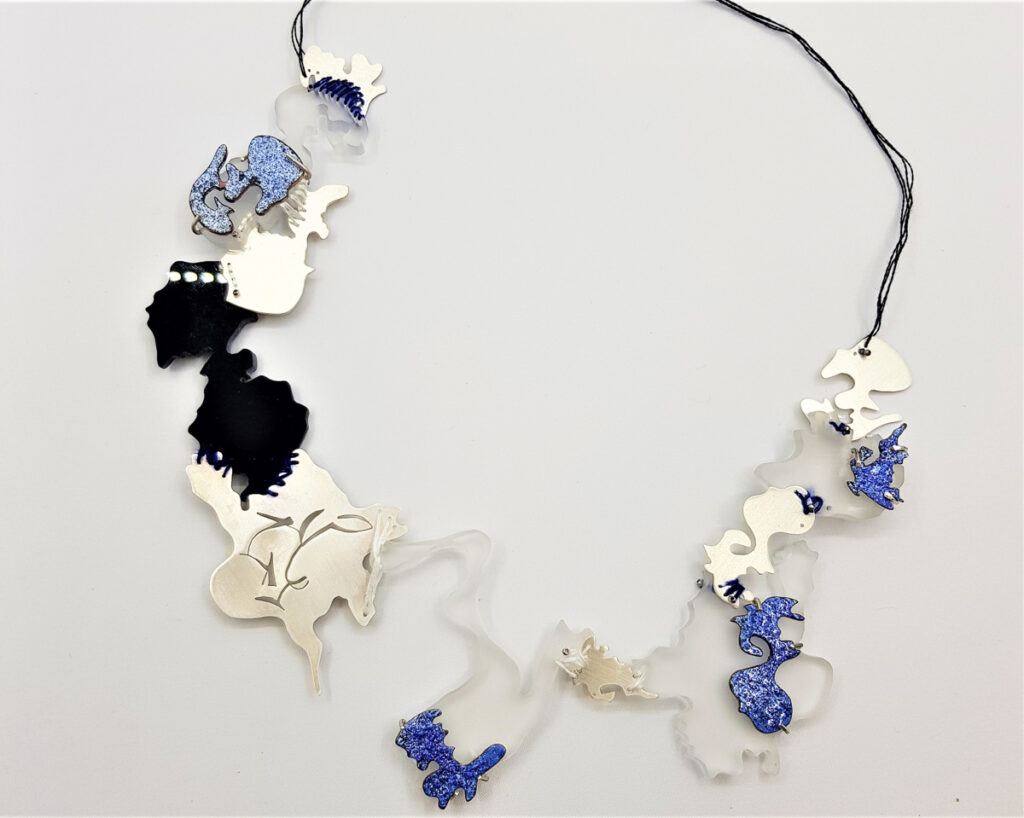 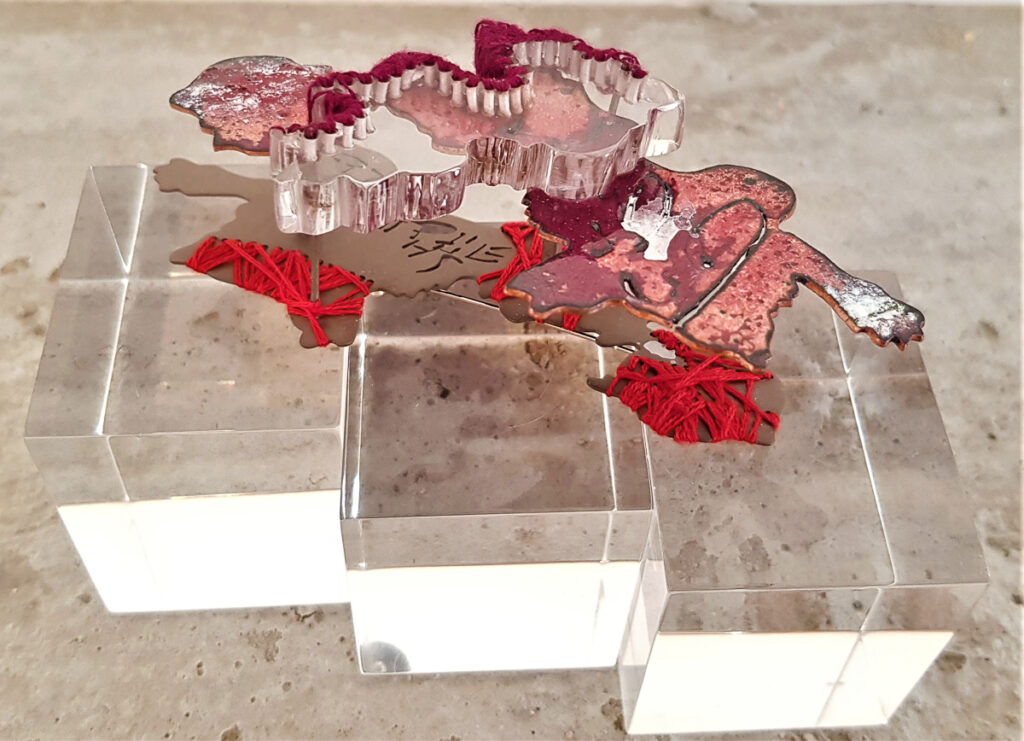 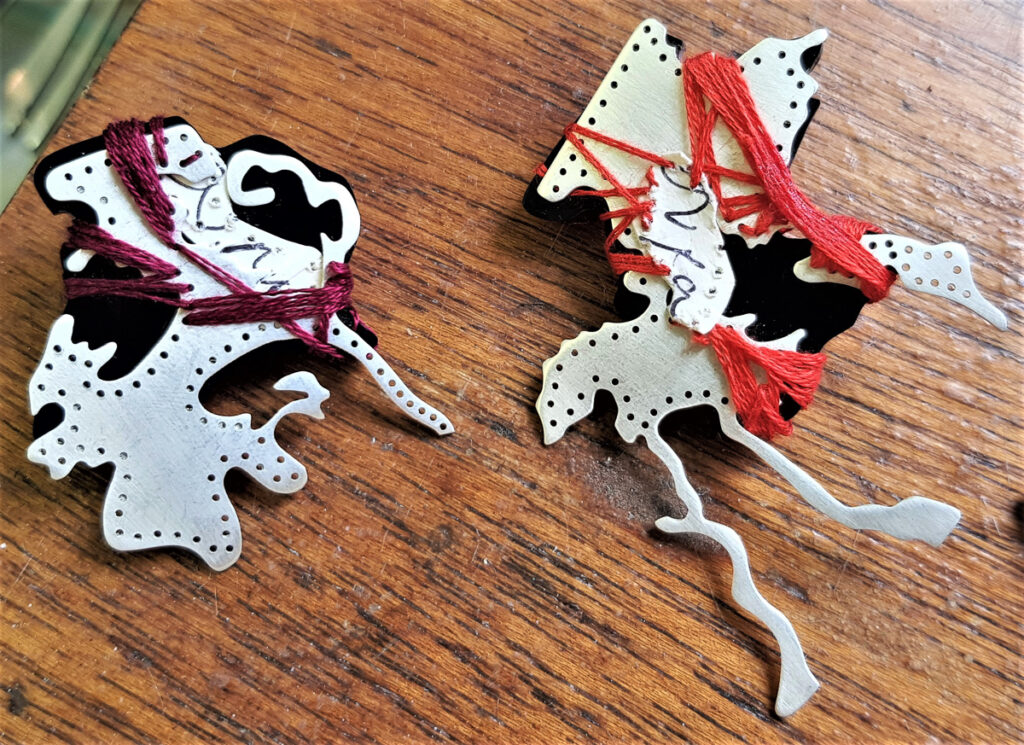 Lara Daryl Landsberg re-creates letters from her Oupa to create a jewellery series that reconnects with her childhood.

On the second of August 2014, my Oupa (“grandfather” in Afrikaans), a father figure and pivotal being in my upbringing, passes away. Four years later, on the 28th of July 2018, my Ouma (“grandmother”), an individual who greatly and positively influenced my life, gets officially diagnosed with Vascular Dementia (Vascular dementia is a general term describing problems with reasoning, planning, judgment, memory and other thought processes caused by brain damage from impaired blood flow to your brain (Graff-Radford, 2018)). Following these events, I find myself in a state of reminiscent nostalgia, awakening and perhaps also confronting a variety of memories of my childhood and time spent in my grandparents’ home. This home was the hub of family activity: a safe, loving and comfortable abode for the Landsberg generations to come together in reunion. As years followed, the reunions lessened but this home remained the basis of my upbringing. Despite the lessened liveliness, this home maintained its energy through the happiness of my Ouma and Oupa. Over time, especially during the months leading up to the second of August, the light-filled atmosphere of my grandparents’ home became a place of sombre dullness. I would hold my Oupa’s hand, as he smiled deeply and gently, mouthing the words “my little Princess”. Not even two weeks later, Pieter Landsberg left his existence on this earth, leaving his home to be a capsule of memories.

Presently, the act of walking through their home arouses newly developed emotions influenced by the events that have occurred to date. I find myself caught in a mixture of emotions in response to space. Its contents and its inhabitant(s), which used to be of natural familiarity, now serve merely as a vessel of remembrance. I fill the shadowed emptiness of the space with thoughts and memories of experiences once enjoyed there. With this comes a severe sense of unfamiliarity in, and disconnection from, a place that I used to call home.

Certain objects within their home, which previously merely intrigued me as a child, suddenly gain a heightened sense of preciousness. Interacting with these objects again, in this previously familiar space, brings back memories of my childhood experiences. The preciousness with which I perceive these objects is through the developed emotions I have towards them; they are no longer just objects; they are symbols of my grandparents’ stories and a means of connection to my memories with my grandparents in their home.

Listening to some of my Ouma’s recollections of her past and moments spent with my Oupa, varying between vividness and distortion, has made me realise the fragility of the mind and subsequently the fragility of memory. As such, I developed a specific interest in the phenomenology of memory, initiated by personal experiences and emotions. My emotional associations with, and responses prompted by, certain objects in my grandparents’ home and my Ouma’s unpredictable reactions to her environment inevitably led me to question the consistency of memory.

Furthermore, my awareness of the ability of objects to act like mirrors or vessels of memories has increased. I realise that their affective properties not only prompt recollections of the past but can also generate emotional affect, which may not necessarily be consistent. The progression of my Ouma’s dementia results in her memory fading significantly, as though a part of her identity has become unfamiliar to those who have known her, at times, rendering her home as a more familiar space than the inhabitant within. Therefore, making me question the impact of memory on identity construction as well as the ability of the material world to encapsulate memory and emotion. This investigation into the impact of memory on identity informs my creative practice by speaking of jewellery pieces as material objects that serve as personalised reflections of significant aspects of our identity. The specificity of the jewellery piece encapsulates an aspect of an individual’s identity, entailing just enough detail to successfully, but silently, communicate their persona on behalf of them.

In essence, I investigate the evolution and progression of objects in relation to the varied meanings given to them, and fluctuations of emotional associations with them, over an extended timeframe. The series of contemporary jewellery pieces that I create serves as a visual narrative of my personal interpretations of my experiences and memories of my grandparents’ home. Therefore, prompting my interest in the transformation of these ‘cherished’ objects into contemporary jewellery pieces and whether this will alter or enhance the attachment and emotional association I have with them. The transferral of these significant objects into contemporary jewellery pieces automatically charges them with sentimentality. A jewellery piece, as an inanimate object, serves as an encapsulated reflection of the wearer. The placement and wearing of jewellery is a personalised process of intimate engagement with one’s body, therefore suggestive of personal attachment to and internalisation of the signification embodied by the jewellery piece.

Handwritten letters from my Ouma and Oupa became my “objects” of focus. I began to view these treasured items as the purest form of my grandparents’ existence. I analysed each word, studying the form of each letter, giving them a heightened sense of preciousness. These letters became a legitimate reference of actuality, a preserved externalisation of my Ouma and Oupa’s innermost feelings for their granddaughter.

I decided to have their form of expression and love exist in duality with my form of expression, through doing what I love, artistic jewellery making. By referring to my emotional associations with these letters and reflecting on the meaning attached to it, I attempted to transform these abstract attributes into visual form. The contemporary jewellery objects that I create encapsulate my current interpretation of the prior emotional associations and memory attached to the original letters and their contents.

I constructed a transformed version of the letters, preserving their originality but altering their portrayal, providing them with even more meaning than they already contained. I used the original letters in my jewellery pieces to emphasise the preservation quality, for myself, containing the pureness and sentiment of the memory. For viewers and wearers, I wish for the pieces to become interactive objects of interpretation and association through their own imagination and memory. I created three contemporary jewellery pieces as a series towards this “object” selection. As my study progresses, I select different objects as inspiration towards my next series. The pieces for this series, celebrating the handwritten letters, are namely, “My Little Princess”, “Fragmented Wholeness” and “A Deeper Dive”. The embroidery thread used as a constant material throughout my pieces was a gift from my Ouma, the personal connection to it emphasises the sentimental quality of the jewellery that I create. I use it as a literal connective aspect for the functionality of the pieces, as though I am tying the fragments of my memories together. Furthermore, the interactive quality of embroidering as a technique mimics the process of accessing my memories.

Contemporary jewellery is jewellery that is used as a vehicle of expression for the jeweller, who is able to engage with the subject area’s anthropological undercurrent by the use of symbolism and conceptual exploration. Contemporary jewellery designs have a contextual backdrop commenting on political, social and cultural change and have a desire to challenge and extend preconceptions of the notion of jewellery. Alternatively, commercial jewellery is a reflection on fashion and wealth, limited to material essentialism and existing modes of manufacture unable to initiate a new way of thinking (Jessop, 2013).

Regimes of Memory. 2003. Edited by Susannah Radstone and Katherine Hodgkin. 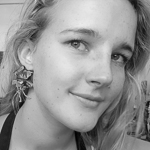 Lara graduated with a Bachelor in Visual Art (Creative Jewellery and Metal Design) degree from Stellenbosch University in 2018. She is an accomplished student, currently studying her Masters in Visual Arts (Creative Jewellery and Metal Design) at Stellenbosch University. She currently lives in Stellenbosch, Cape Town, but is originally from Johannesburg. Lara’s research focus is inclined towards memory and imagination studies. She uses a variety of unique materials to create her pieces in order to encapsulate and express the rich meaning of the concepts that she researches. You can find her on Instagram: @von_ara_jewellery/ and Facebook: @vonarajewellery.