Kethek Ogleng is a traditional East Javanese dance patterned after the behaviour of kethek (monkeys). It depicts the tale of two lovers; Princess of Jenggala, Dewi Sekartaji, and her lover, Raden Panji.

Initially performed by the people of Tokawi Village, Pacitan, the Kethek Ogleng is a traditional East Javanese dance that patterns itself after the behaviour of kethek (monkeys). It is typically performed by three female dancers and one male dancer and depicts the long-told tale of two lovers: the Princess of Jenggala (an old kingdom in what is now the Sidoarjo Regency), Dewi Sekartaji, and the man who loves her, Raden Panji Asmorobangun from the kingdom of Kediri.

The performance begins with the introduction of three female dancers to the stage; the lead dancer plays Dewi Sekartaji, while the other two play her handmaidens. Dewi Sekartaji is in love with Raden Panji and wishes to be united with him. However, her father, the Raja of Jenggala, has plans to marry his daughter to someone of his own choosing, and upon hearing this, Dewi Sekartaji secretly flees the kingdom with her handmaidens and heads west.

When the news of Dewi Sekartaji’s disappearance reaches Raden Panji, he immediately sets out to find her. On the way, he encounters a wise Pendeta (Indonesian sage) who suggests he goes west, and that he does so disguised as a monkey. Meanwhile, Dewi Sekartaji has disguised herself as Endang Rara Tompe—a masculine figure with its own Javanese fable—and while climbing a mountain, finds a place to rest and settles there for a time.

Raden Panji, who has since followed the directions of the pastor and travelled west as a monkey, happens upon this place, and thus the two meet in their disguises, unaware of each other’s hidden identities. On stage, this is reflected in the movements of the monkey as he enters the scene and sees Endang Rara Tompe and his two bodyguards; the ensuing dance sequence is playful and conveys genial curiosity between the two. The monkey dancer’s fast tumbles, energetic jumps, and rolling movements juxtapose the monkey’s nature with that of the steady, evenly paced figure of Endang Rara Tompe, and yet the two dancers move together in a complementary duet that depicts a harmonious closeness.

This union between the two dancers marks the closing of the dance, and the performance of Kethek Ogleng ends with Endang Rara Tompe riding the monkey, as the two handmaidens hold a representation of the Goddess Sekartaji.

“The concept we describe is more of an artistic movement than just describing the philosophical meaning of the dance,” said Anang, Chairman of the Krido Rahayu Pacitan Dance Studio. “We developed this dance in such a way that it is pleasant to look at… a little out of the original basic dance, with creative movement so that it is interesting enough to watch, and does not leave [the original story.]”

“If we want a composition to be good, then we try to develop upon the concept of a dance that has existed before.”

In the original story, after their long-awaited meeting, Endang Rara Tompe changes his incarnation back into Dewi Sekartaji, and Raden Panji sheds his monkey disguise. Reunited, the pair return to the kingdom of Jenggala to get married.

These two characters figure quite prominently in traditional East Javanese stories and are even thought of by some as the reincarnations of Kamajaya and Kamaratih, the Hindu god and goddess of love. Often, as is the nature of traditional storytelling, the tale varies in its details; sometimes Raden Panji is the prince and Dewi Sekartaji a commoner, and sometimes they find each other on opposite sides of a battlefield, with her disguised as a warrior king.

The many variations of their story, compiled as episodes in the Panji tales and listed in the UNESCO Memory of the World Register, are honoured and interpreted into all manner of traditional crafts and mediums. Aside from Kethek Ogleng and other masked pantomimes, there are many forms of wayang (puppetry performances), using wooden puppets (East Java), three-dimensional rod puppets (West Java), or scrolls. Scenes and characters of the Panji tales are painted on batik (patterned cloth), given menacing airs or exaggerated features as the artist sees fit. Likewise, they are referenced in the architecture of thirteenth-century East Javanese candi (Hindu temples), depicted in narrative reliefs of a more serene, naturalistic style.

This sense of transformation and devotion that is so particularly inherent to traditional crafts is, incidentally, the very essence of Dewi Sekartaji and Raden Panji’s story. Like the unfaltering faithfulness that led them to each other through countless disguises and across all variations of their tale, the craftspersons of Javanese arts keep a steady hand on tradition to guide them through the transformations of both their own visions and the changing lens of their times. 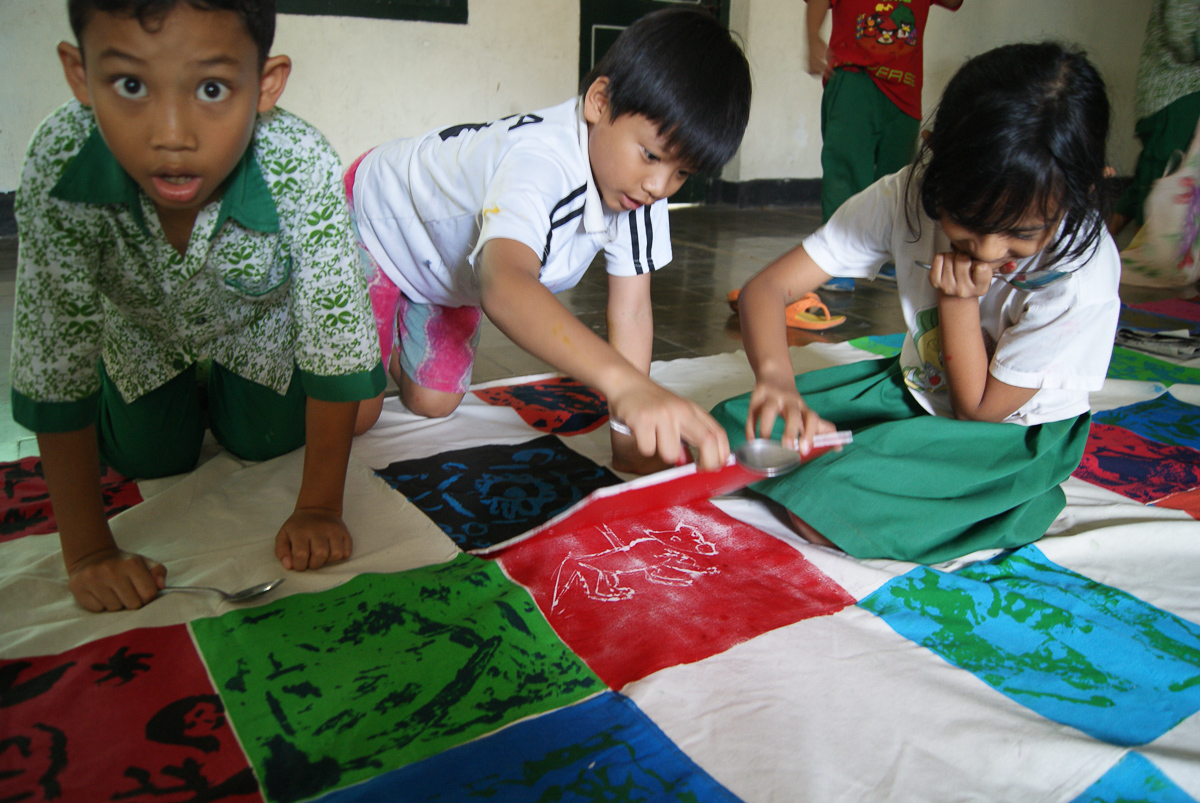 Batik journeys between the three worlds: Here, there and everywhere
Elly Kent follows the path of batik as a way to explore the complex dynamic of Indonesian culture and to discover a much-needed optimism for our time.