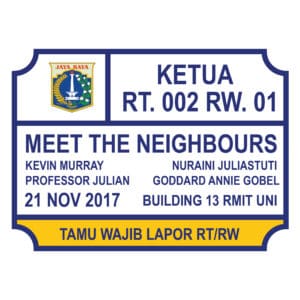 How do we engage with one of the world’s fastest-growing countries? A number of collaborative projects provide a glimpse of the way Indonesia will shape our creative practices in the future. The current issue of Garland uses the call “rame rame” (let’s do it) to reflect the particularly informal nature of creative collaboration that characterises Indonesia, which builds on the principle of “gotong royong” (mutual cooperation) on which the nation was founded. Speakers consider the nature of this practice and the questions it raises. While it provides a freedom to work together, does the lack of formality have a cost? Do more formal Western cultures have a positive role to place in Indonesia, such as education.

There was a great turnout to the “Meet the Neighbours” forum, including many local Indonesians. We heard from Kusumawardhannie (Annie) Gobel talk about the Complete Me project that extended an Indonesian approach, blending friendship with art, to the otherwise very cool contemporary jewellery scene in Melbourne. Nuraini Juliastuti spoke about the complexities of the “gotong royong” principle in the history of the Indonesian nation, which ranged from a very collectivist movement under Sukarno to situations where it can be used coercively. And Julian Goddard spoke about the very intense and quite intimate exchanges between Indonesia and Australia, particularly from Perth, going back to the 1960s. The audience contributed a range of views. Alison Carrol spoke about the decline of Indonesian languages in high school and universities. One local Indonesian said that he found Indonesian art too fixed on a certain kind of politics and he appreciated the greater diversity in Australia. Multicultural Arts Victoria rep Andy Miller informed us of all the Indonesian art that features in the upcoming Mapping Melbourne festival. Finally, Julian reflected on the need to consider the extraordinary craft skills in Indonesia.

The tantalising questions that this forum evoked included:

The Princess & the Bael Fruit ✿ A unique encounter with Warli art on 24 October
The Persian Prospect - A panel discussion about the future of Iranian art in the...
Teaching through windows: How to conduct an online craft workshop
Mancapat: Heritage batik from today's soil
Rame rame! A call for friendworks
Love or Money? A maker discussion about models for postcapitalist creativity
New Homes for Old Stories - Symposium/workshop in Mumbai, 5 February
Kasih Project ✿ Delivered with love, Indonesia style